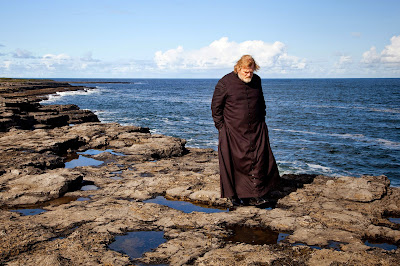 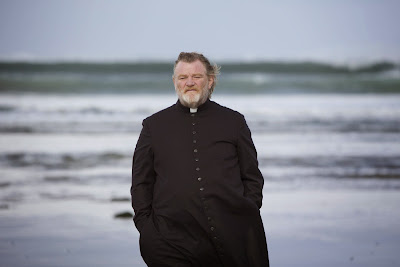 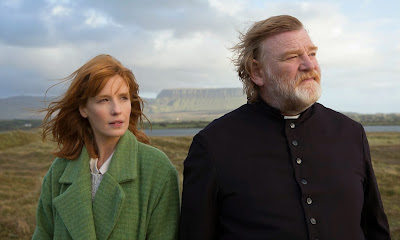 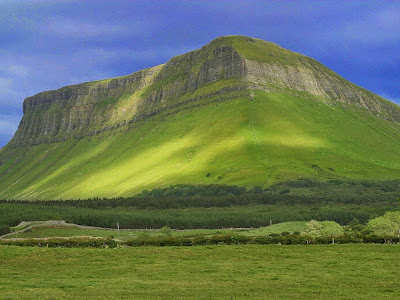 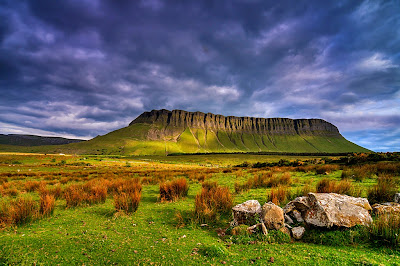 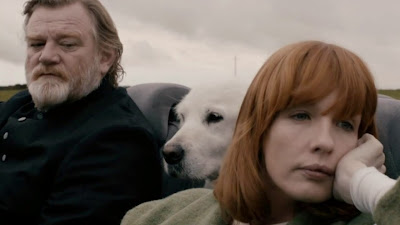 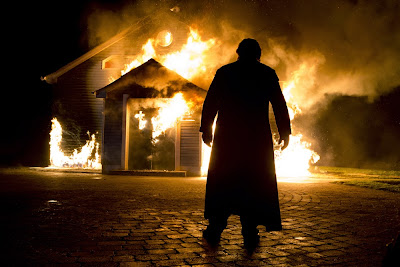 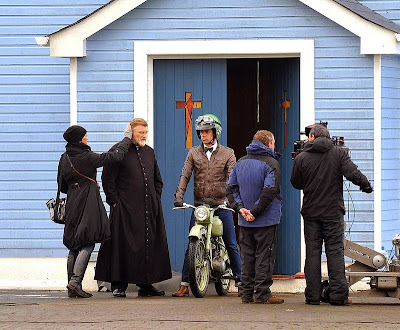 
Many times man lives and dies
Between his two eternities,
That of race and that of soul,
And ancient Ireland knew it all.
Whether man die in his bed
Or the rifle knocks him dead,
A brief parting from those dear
Is the worst man has to fear.
Though grave-diggers’ toil is long,
Sharp their spades, their muscles strong.
They but thrust their buried men
Back in the human mind again.


I’ve always felt there's something inherently psychopathic about joining the army in peace time, as far as I’m concerned people join the army to find out what its like to kill someone.  I hardly think that’s an inclination that should be encouraged in modern society, do you?          —Father James Lavelle (Brendan Gleeson)

This is a film unlike anything else seen in awhile, perhaps ever, as one needs to be psychically prepared for the metaphysical seriousness of tone, a modern morality play where despite the religious subject matter wrapped in Catholic doctrine, this plays out like a bleak existential western, a morbid take on HIGH NOON (1952), where one man alone takes on the forces of evil, unable to use the powers of the church or God to stop the inevitable doom from happening.  Named after the site where Christ was crucified, the film opens in the confession booth as a priest, Father James Lavelle (Brendan Gleeson), hears a man threaten to kill him in one week’s time, naming the date and place of his murder.  The film then recounts the events of the week, day by day, leading up to that fateful hour.  This is as far from an action film as one gets, taking the audience completely off-guard, as the film relies instead upon the expository writing of the author, the writer/director of the hilariously offbeat The Guard (2011), also featuring a magnificent performance by Gleeson, but this is about as hushed and toned down as films can be, as the priest makes his usual rounds visiting various people in the community unannounced, where the entire film is a character study that consists of these intensely personal conversations, becoming a slowly unraveling philosophical treatise on man’s fate.  The Catholic church is as much the target as Father James, as the wounded parishioner was sexually abused by a priest from the ages of seven to twelve, recalling the horrendous pain he was forced to endure that has never left him, carrying the hurt and anguish around with him where his only consolation, since the offending priest is dead, is to target a good priest.  Father James, by all accounts, is well-liked and respected by all, where he has a worldly intelligence, as he came late to the calling, only after overcoming a drinking problem and ending in the death of his wife.  Adding to his own personal shame, his troubled daughter Fiona (Kelly Reilly) has been the victim of failed romances, the most recent resulting in a suicide attempt.  While the priest is the film’s centerpiece, she’s his able assistant, where the two make a remarkably astute pair, going on long walks together, recovering what they can from their own damaged lives.


McDonagh, along with his brother Martin, one of the best known living Irish playwrights who wrote and directed In Bruges (2008), intends this to be the second installment of a Suicide Trilogy, all starring Brendon Gleeson, beginning with The Guard featuring Gleeson as a policeman schooling an American FBI agent (Don Cheadle) on local Irish police procedures while tracking down a drug smuggling ring, while in the third, THE LAME SHALL ENTER FIRST, Gleeson will play a paraplegic ex-policeman attempting to solve the murder of a friend whose death has been overlooked by the carelessness of the police.  As an older, bearded man in a wheelchair, expect Gleeson’s character to spew vitriol at every “able-bodied” human being.  So while the first and third appear to be laced with acerbic black comedy, CALVARY is one of the more profoundly contemplative films of the year, yet also feels like a mournful death march, similar to the atmospheric mood of Jim Jarmusch’s DEAD MAN (1995), complete with similar philosophical examinations.  The film is a full frontal attack on the Catholic church, who turned a blind eye to the Catholic sexual abuse scandal in Ireland, an epidemic of sexual abuse cases by Catholic priests in Ireland (Republic), where more than 35,000 Irish teenagers and children from Catholic-run orphanages or reformatories were abused by priests from the 1930’s until their discovery in the early 1990’s, not to mention priests from prominently renowned churches to the Magdalene asylum.  Despite thousands of witnesses coming forward, including a 9-year government commission to investigate the allegations, few offenders have been prosecuted, but this hasn’t in any way altered the Church’s practice of accepting money.  Because of the public notoriety of the church sex scandal around the world, it is almost universally accepted that no female nuns come from Ireland, Western Europe, or even North America anymore.  While the ramifications of this detestable scandal, almost invisible within the church itself, is a central theme of the film, where the suggestion seems to be life goes on, so let’s get on with our lives.  But some scars never heal, where they fester and only grow worse over time, with the act of revenge becoming the only viable response that matters, that gives meaning to every last breath, as all else has already died long ago.  It is in this anguishing spiritual abyss that CALVARY resides, a deeply introspective film that attempts to examine the meaning of faith in a faithless world, or find value in hope only after all hope is lost.


As much as any Western country, Ireland has certainly had its faith tested in recent years, crawling out from under the absolutism of the Catholic Church, where money and modernity have been equally elusive.  Shot by Larry Smith, the film makes exquisite use of the rugged Irish coastline with seemingly endless rolling waves and the picturesque rural locale of County Sligo, including the looming omnipresence of Benbulben lurking off in the distance, a large rock formation in the Dartry Mountains, an area sometimes called “Yeats Country,” as the poet spent part of his youth there and is buried nearby.  The stunning beauty of these exterior geographical locations only heightens an interior examination of the characters, where this is a sin and redemption movie with Father James spending what could potentially be his final week making unannounced visits to any number of damaged individuals as he consoles a grief-stricken widow (Marie-Josée Croze) whose husband dies senselessly in a car crash while touring the region, an aging writer (M. Emmett Walsh) with a love for Hoagy Carmichael and American jazz of the 20’s and 30’s who begins to have contemplations about his impending death, an attractive butcher’s wife Veronica (Orla O’Rourke) who recently left her husband Jack (Chris O’Dowd) after sporting a black eye, though he blames it on an African boyfriend (Isaach de Bankolé) who takes offense to the priest’s prying insinuations.  Perhaps most pathetic is a retired stock trader Michael (Dylan Moran) who has earned a fortune, recently purchasing a fabulously expensive mansion without his wife and child who left him, leaving him to stew in his own self-imposed existential emptiness where life has lost all meaning, while the creepiest is a visit to the prison seeing a former student, Freddie Joyce (Gleeson’s own son Domhnall Gleeson), a convicted serial killer sentenced to life, as Ireland has no death penalty, who reminds the priest that he’s also one of God’s creations, wondering if God could understand him, to which Father James judiciously responds, “If God can’t understand you, no one can.”


Throughout these visits, he continues to interact with his daughter Fiona, who felt doubly betrayed both by the death of her mother and then the absence of her father when he left to join the priesthood, where this visit is an attempt to heal their wounds.  This is a dark and somber drama, thoughtful and quietly moving throughout, showcasing an acerbic wit and black humor, especially since an ugly nature permeates throughout this country town, with scorn and resentment filling the air, where any one of them could be guilty.  They are a sorry bunch filled with the devil’s mischief, deserving of the Father’s pity, yet they hold him in utter contempt, as nobody believes in anything anymore.  A brooding study of human nature where Father James is thwarted at every turn, the film slowly and deliberately moves towards that inevitable confrontation between the forces of good and evil, resulting in a vividly unsparing climax that leaves nothing to the imagination.  “I was one of the lucky ones!  There’s bodies buried back there,” where the tortuous pain of the afflicted parishioner bares its ugly soul with the volcanic fury of insufferable pain, as the film revisits the same places over the end credits without the presence of people, losing all sense of humanity, where the stark emptiness is a jolt to the system, especially accompanied by hauntingly transcendent Guaraní harp music from Paraguay, Los Chiriguanos - Subo - YouTube (“Subo” I Climb, 3:01), where Los Chiriguanos are two men from the tribe of Chirigua that have existed in central South America since long before the Spaniards came in 1527, who themselves have suffered their own indignities, yet produce such heavenly music.  The common thread throughout is carried by the good intentions of mortal men, much like the country priest in Bresson’s Diary of a Country Priest (Journal d'un curé de campagne) (1951), whose persistent effort to help build a better understanding in the world brings the eternal into ordinary day to day experiences, which may as well be the grace of God.
Posted by Robert Kennedy at 12:32 AM