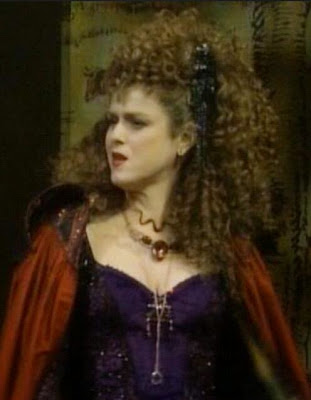 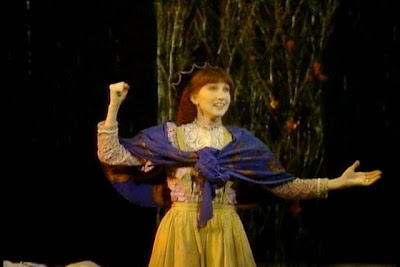 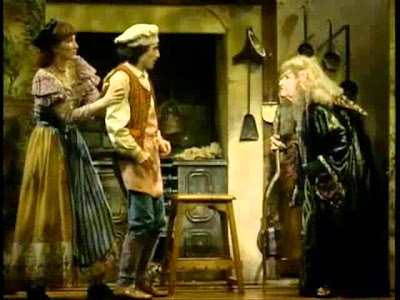 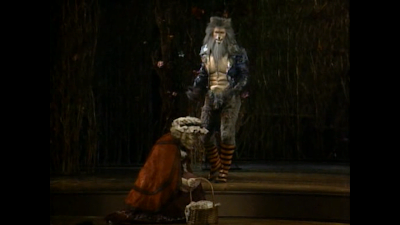 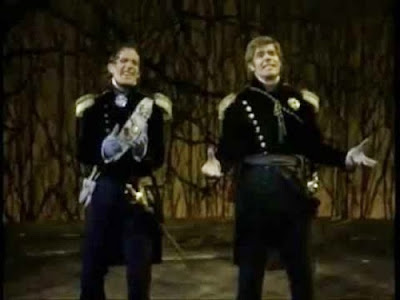 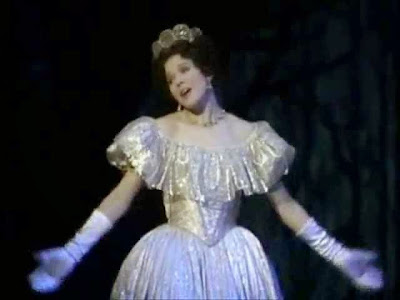 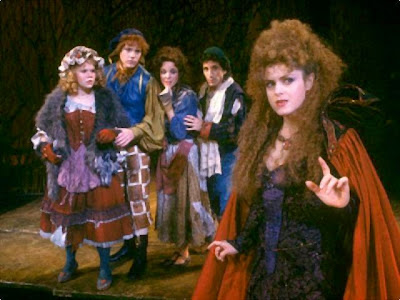 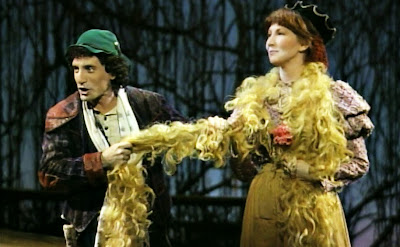 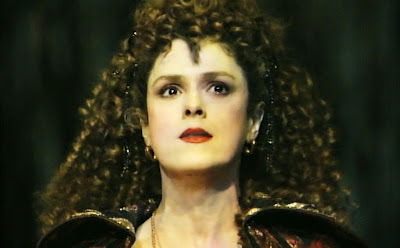 
I was raised to be charming, not sincere.        —The Prince (Robert Westerberg)


One of the most endearing of all Stephen Sondheim musicals, a magical experience largely because of its universal accessibility, one that pokes fun of children’s fairy tales, imagining them with different outcomes than ending happily ever after, premiering on Broadway on November 5, 1987.  Divided into two halves, separated by an Intermission, the first half fits the audiences expectations by ingeniously combining several classic fairy tales, Cinderella, Little Red Riding Hood, Rapunzel, and Jack and the Beanstalk, with a sarcastic narrator (Tom Aldredge) dressed in a suit visibly seen standing off to the side of the stage advancing the stories with a polished relish, while in the second half, when the familiar suddenly turns unrecognizable, elements of death and stark realism are added, where the story grows darker with a chilling despair that haunts the surviving characters, suddenly cut off from their families and homes, left to fend for themselves in a changing world.  Music and lyrics by Sondheim, with a clever story written by James Lapine, the production won three Tony Awards, Best Score, Best Book (Story), and Best Actress in a Musical (Joanna Gleason as the Baker’s wife, whose deadpan timing is a joy to behold) in a year dominated by The Phantom of the Opera, winner of seven Tony awards, becoming the longest running Broadway show in history.  Collaborating with Lapine, the writer has a taste for visually oriented theater, where their first musical together about pointillist painter Georges Seurat was Sunday in the Park with George, in 1984, winning two Tony awards for design, while Sondheim and Lapine won the Pulitzer Prize for Drama.  Lapine also directs the film, attempting to recreate the Broadway experience by simply filming a performance in front of a live audience, but the suffocatingly narrow and confined limitations of a fixed camera with a zoom lens moving in and out, but not panning from side to side (where interestingly the stage moves instead of the camera), prevents an overall view of depth and breadth of the entire stage, losing much of the three dimensional aspects of movement, as there are plenty of scene changes within a scene, often losing connection with characters, where the visual effect throughout is everything feels flattened out.  This is the same problem with filming operas (appearing regularly in movie theaters nowadays), where these specific theatrical performances were meant to be experienced live in theaters where the sound reverberates throughout the music hall.


Ostensibly a story about a childless Baker (Chip Zien) and his wife (Gleason) and their magical quest to begin a family, fighting off a curse placed upon them years ago by an ugly Witch (Bernadette Peters, a delight in one of her best roles), who has herself been cursed, collecting several items the Witch demands to reverse the curse while interacting with other storybook characters throughout the journey.  With music tying all these elements together, the opening sequence of heading “Into the Woods” draws in many of the featured characters, including Little Red Riding Hood (Danielle Ferland, who ultimately becomes knife-wielding and cynical) snatching as many cookies as she can grab in the bakery before she’s off to her grandmother’s house, a somewhat dimwitted neighbor Jack (Ben Wright) who through impoverished circumstances is forced by his mother to take his best friend, a cow named Milky White (an inanimate object), to the market for money, while Cinderella (Kim Crosby) is seen fleeing through the woods wearing slippers of gold while escaping from the Prince (Robert Westerberg, who doubles as the wolf, and after meeting on the set ironically goes on to marry Cinderella/Kim Crosby in real life afterwards) after the luxurious ball, a recurring event that happens on each of three consecutive nights.  The First Act plays out like a delightful run-on sentence, continually getting carried away with one idea, which overlaps into another, and another, creating waves of interconnecting sequences that are humorously developed through complicated musical lyrics that are given the Sondheim touch, where he is a master of cleverly crafting music and lyrics specifically tailored to the characters and situations within his musicals.  Perhaps setting the absurdly ridiculous tone for the story is one of the more memorable musical numbers, a duet of dueling princes in “Agony,” Into the Woods - "Agony" - YouTube (2:39), one (Chuck Wagner) who can’t fathom how to steal away Rapunzel locked in her tall tower with no doors and the other whose fair maiden keeps eluding his grasp at the ball, something he finds unthinkable, where he attributes it to “madness,” each an exaggerated caricature of what a Prince Charming is supposed to be, yet each bemoaning the opposition they encounter as if it were a fate worse than death.  But that’s only a prelude for worse catastrophes yet to come.  When the Witch discovers the Prince has romantic inclinations with Rapunzel, she begs her daughter not to leave her, as the world outside is filled with trouble and heartache, "Stay with Me" - Into The Woods (1991 ... - YouTube (2:46), becoming one of the best songs ever written about parental loss.  When Rapunzel refuses, however, the Witch angrily blinds the Prince, cuts off Rapunzel's hair and banishes her to the desert.


Part of the beauty of the play is how well the audience is initially comforted by the opening act, where everyone finds what they’re looking for, as the Bakers have a child, the Witch has regained her beauty, Cinderella has married the Prince and lives in a castle, Little Red Riding Hood has defeated the Wolf, and Jack and his mother are no longer poor, as the magic beans received for the cow have brought them riches, where “once upon a time” has led to “happily ever after” and all is seemingly right with the world.  At the Intermission, audiences are likely to be smiling.  But the second act literally transforms the play, as something devilishly clever aspires to something even greater, where simply following one’s customary storybook destiny without having to make difficult choices is not in the cards, as that is not how life works.  Despite achieving what they set out to, everyone seems happy on the outside, but underneath they all still yearn for something more, where the Bakers fret about not having enough room for a new family, while Cinderella may actually be growing bored with the Prince, and Rapunzel, despite being freed from the tower, wanders aimlessly in the desert, where her blind Prince somehow finds her there, regaining his sight from her tears and marries her on the spot, but she’s grown hysterical.  Both Prince Charmings continue to romance other women, betraying their wives in the process, but this is all they know.  While Jack initially chopped down the beanstalk, leaving a Giant dead in their backyard, a new Giant is detected from another beanstalk, a Lady Giant who’s fuming over the loss of her husband and wants the child responsible handed over to her.  In her wrath, she destroys the castle, steps on Grandmother’s house, and causes the death of the Baker’s wife.  In regaining her beauty, the Witch has lost her powers to defend against such a formidable creature, singing the “Last Midnight” in their darkest hour, leaving them seemingly at the mercy of the Lady Giant, many having lost their homes and their loved ones.  This heartache and tragedy is reflected in one of Sondheim’s greatest songs, “No One Is Alone,” where Cinderella comforts Little Red Riding Hood while the Baker consoles Jack after he’s lost his mother, trying to keep his anger from swelling up into vengeance.  In the end only a few survive, but they are visited by the spirits of the ones they lost, where the Witch, of all people, delivers the moral of the story, singing one of the most beautifully heartfelt songs, “Children Will Listen,” before they all collectively return to the introductory main theme song, “Into the Woods.”  These complex characterizations are the heart of the story, as Sondheim brings the unfamiliar into the familiar, where this is one of his more audience pleasing and ingeniously created works.  By the end, we feel intimately connected to the characters, mixing comic wit, savage satire, and pure tragedy into their otherwise fortuitous lives, bringing them to the edge of the apocalypse where their world, as they and we in the audience know it, is completely destroyed and they must find a new way to survive outside the safely protected confines of fairy tales and illusion.
Posted by Robert Kennedy at 12:00 AM