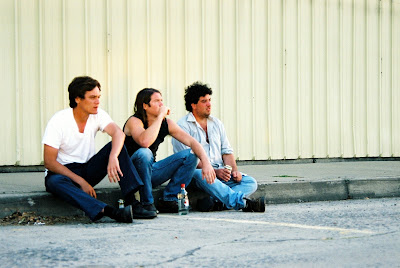 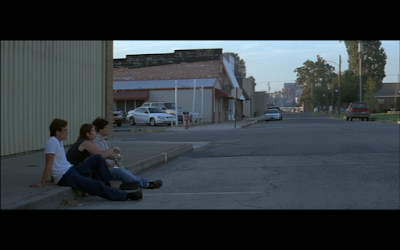 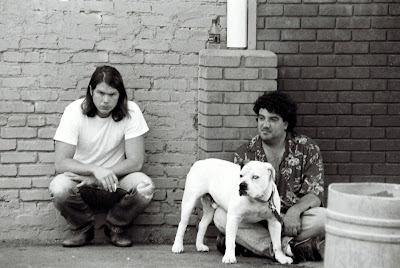 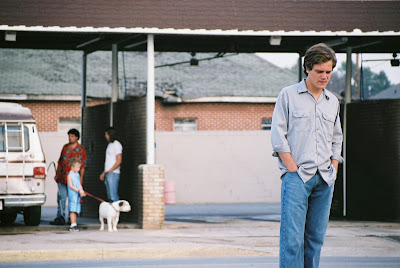 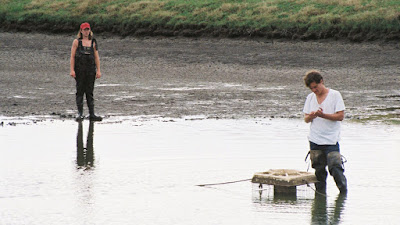 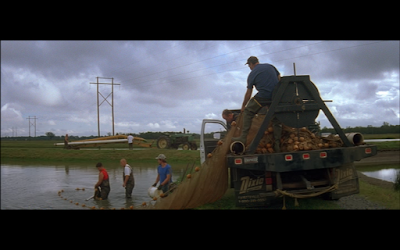 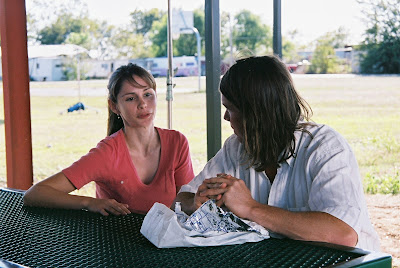 This is one empty-ass town

Evoking a poetic portrait of rural malaise, this film written by first time director and producer Jeff Nichols looks more like early David Gordon Green, one of the other film’s producers, filled with impressionistic vignettes of a worn out, broken down town where we see endless fields of already harvested cotton, rusted out tractors, hardened faces that are sharply edged in downtrodden dissatisfaction, people with few words and exposed raw nerve endings, this is a modern day update on the bickering Capulets and the Montagues, without any Romeo or Juliet as their saving grace, leading instead to instances of inflamed violence and revenge, which only brings more brutal emptiness and despair to all concerned.  Shot in ‘Scope by Adam Stone, there are elegant yet depressed landscape shots dwarfing the residents of England, Arkansas located near the Mississippi border where an unlikely riverboat is docked.  Meet the Hayes family, three brothers on one side with names like Son, Kid, and Boy, all but left for dead by both parents, forced to fend for themselves while their dad went across town to start a new family with four more boys, apparently finding religion and respectability, leaving his former life of alcoholism, ruthlessness and a horrible marriage behind.  But when the old man dies, harsh words are said at his funeral which awaken a deep seeded hatred between the two sets of brothers “that has been there all along.”

The film spends more time with the no name bunch eking out an existence on the outskirts of town, where we see in the opening Michael Shannon as Son, his back riddled with shotgun pellot scars, his wife and son have just left him temporarily, so brother Kid (Barlow Jacobs), who’s been sleeping in a tent outside can move into the house and younger brother Boy (Douglas Ligon) can move out of his live-in van to the living room sofa.  This musical chairs happens so naturally one gets the feeling they’ve done this sort of thing before.  While Son scrapes out a living for a local fish hatchery, the other two have no visible means of support.  Sitting on the porch drinking beer or sitting on a town curb drinking beer is their idea of a night out, as there’s literally nothing else to do in this dirt barren town.  When Son’s wife (Glenda Pannell) returns carrying a frying pan, just to peruse the lay of the land and see what state of helplessness they are in, she leaves just as quickly, taking her frying pan with her, realizing they’re too lazy to even notice its absence.  Kid wants to marry his sweetheart (Natalie Canerday), but he doesn’t own a truck or even have a place to stay, nonetheless, she brings him cheeseburgers for lunch just to sit silently beside him and watch him eat.  Boy is married to forever fixing his broken down van, where the stereo system has a CHRISTINE-like mind of its own, turning on and off at will, reminding us of that 8-track sound where every band sounds like Journey.  The director’s brother Ben Nichols and his Memphis band Lucero provide the laid-back indie soundtrack featuring a song “The Duel Pt. II” lucero - eight paces to jackson - 08 - the duel part II.mp4 ... YouTube (5:38) which perfectly blends into the small town desolation of the film, with the song “Hold Me Close” Lucero, "Hold Me Close" at V Club in Huntington ... - YouTube (3:34) playing over the end credits.  "No Roses No More" Lucero - No Roses No More - YouTube (5:44) played in the trailer but is not used in the film.  The band has a website here:  ~ Lucero ~

More an accompilation of acute regional details, with an ear for local dialect and situational comedy, this is a bare bones, wryly observed social drama that never resorts to caricature, that sympathizes with both sets of brothers, where Michael Shannon is simply superb as the brooding, laconic older brother who offers plenty of wit, usually summed up in a few terse words, always keeping his brothers in line.  Whenever the two sides come in contact with one another, hate words are used which create a defiantly stand-offish mood, where quick trigger tempers take us back to the shoot out mentality in the Wild West, where sometimes one man simply has no use for the other and is willing to risk his life to shoot him.  This air of merciless contempt, one side toward the other, pervades throughout the entire film, literally squelching any other thought process before it has a chance to develop.  There is an interesting use of children here as silent witnesses who have to bear the burden of their parent’s deep-seeded family difficulties.  Interspersed between these inevitable confrontations are small portraits of everyday life, featuring hilarious scenes of Boy attempting to get a window air-conditioning unit to work in his van through the cigarette lighter, or mix margaritas through an electrical blender hooked up to his battery, but also featuring an amateurishly bandaged friend named Shampoo, G. Alan Wilkins, a drug dealer who likely blew up his own house, along with an eye, while running a meth lab, now on the run from police and is a rural outcast story all unto himself.  His familiarity with a shotgun is priceless, however, as is the scene of the brothers all huddled around that air-conditioner sitting out in the yard atop a picnic table, finally working at last connected to an extension cord into the house.  This kind of befuddled family logic is invaluable in conveying the mindset of the Hayes brothers, all of whom have probably never set foot outside a 25-mile radius of their homes.  Beautifully shot and perfectly cast, the slow pacing sets a perfect tone luring the audience into this God forsaken world, where the pent up violence typically takes place offscreen while the enormous toll it causes continues to eat away at every one of them, and us, long after the film is over.
Posted by Robert Kennedy at 1:49 AM