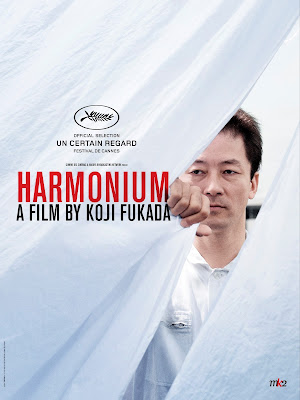 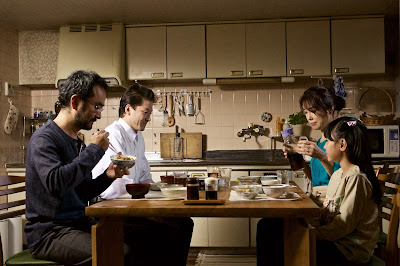 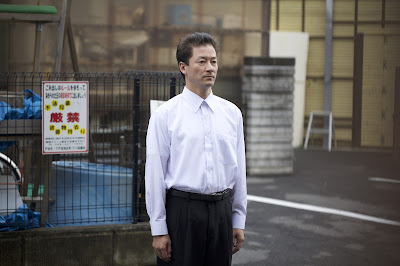 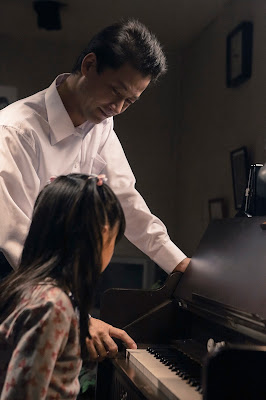 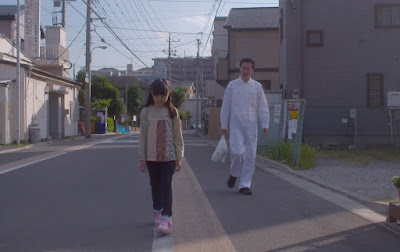 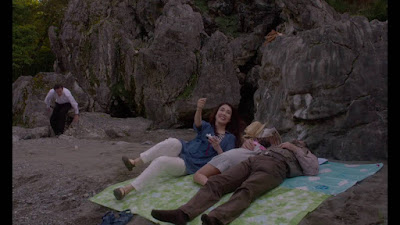 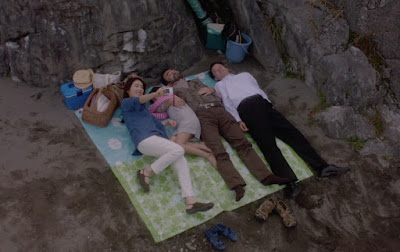 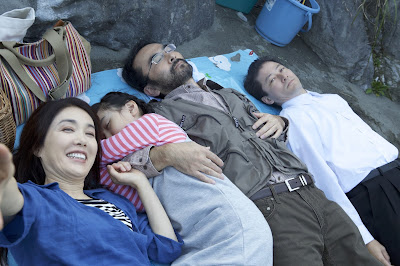 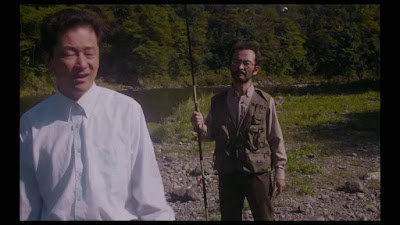 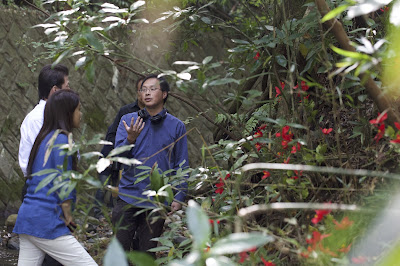 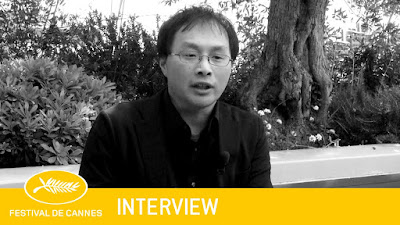 Those happy times have been and gone.
—a song sung by Yasaka (Tadanobu Asano)

An unsettling and slowly developing film that has a way of creeping up on you, where the intensity and full force of this innovative film comes as a complete surprise.  While the Japanese title might best be translated to Standing On the Edge, this is a typical working class drama that might lull you to sleep with its simplicity before suddenly taking a strange turn veering into the horror genre.  While not as audacious as Takashi Miike’s AUDITION (1999), the two-part technique is similar, though this restrained family drama is much more carefully calibrated to send the audience swooning into the ambiguity of unanswered questions.  Winner of the Jury Prize (2nd Place) in the Un Certain Regard at Cannes, and one of the better directed films of the year, Fukada upends the traditional format for a Japanese domestic drama, creating an eerie film that stands alone in its stark originality, where you may wish to see it again just to review the embedded clues that you might have missed the first time around, as events escalate quickly, catching the viewer off-guard.  An ordinary husband and wife, Toshio (Kanji Furutachi) and Akié (Mariko Tsutsui), live an uneventful life with their beloved 10-year old daughter Hotaru (Momone Shinokawa) who is learning to play the harmonium, seen practicing with a metronome in the living room for an upcoming recital.  What might seem strange to international audiences is just how expansive Toshio’s industrial workshop is, where he has created a small machine factory as an addition to the family home, which opens to the street like a garage door.  To see welding and sheet metal cutting happening in one’s garage is not something you see every day, where the decibel level would have to be extremely high, an ear-splitting presence to any neighborhood.  In America you’d have to get certain zoning changes permitting industrial work in what is otherwise a residential neighborhood, but in Japan, this may be a fairly common practice.  Nonetheless, Toshio retreats to the private sanctity of his work in the garage much like other husbands head off to work every day, where the audience gets used to the routine, with the husband returning into the home later that evening where they all sit down for dinner.  There is little back and forth banter between the parents, as mostly they ignore one another, while the mother and daughter say grace before meals and then chat away, with the father remaining silently isolated and alone.

Without a word to his wife and daughter, Toshio is unexpectedly met in his garage by an old friend, who is invited to stay with them temporarily, where he will help with the needed work while living with the family.  Yasaka, the invited guest, is played by Tadanobu Asano, who has a storied career in Asian cinema working with some of the best directors, most recently in Kiyoshi Kurosawa’s JOURNEY TO THE SHORE (2015) and his earlier BRIGHT FUTURE (2003), Pen-ek Ratanaruang’s LAST LIFE IN THE UNIVERSE (2003) and INVISIBLE WAVES (2006), playing the uncle in Katsuhito Ishii’s The Taste of Tea (Cha no aji) (2004), a samurai swordsman in Takeshi Kitano’s ZATOICHI (2003), and the sadomasochistic killer in Takashi Miike’s ICHI THE KILLER (2001), but also has appeared earlier in Nagisa Ôshima’s GOHATTO (1999) and Hirokazu Kore-eda’s first film MABOROSI (1995).  To say the man carries dramatic weight is an understatement, yet we learn he was recently released from prison, but more about his past remains a mystery, so it’s not clear why Toshio offers him the job and invites him into his home.  What is immediately apparent is the stilted and impassive manner in which Yasaka carries himself, always dressed for a funeral in a clean white shirt buttoned up to the neck, retaining an eerie air of stillness, suppressing all emotions, speaking in a hushed and halting deadpan, yet always exceedingly polite.  He’s a bit spooky, with unclear motives, turning up mysteriously, seemingly appearing out of thin air like a ghost, where he simply has a strange and daunting presence.  When Akié asks about their longstanding friendship, as she never heard her husband mention him before, nothing about his past is revealed, where the husband’s usual stoicism is to remain tight-lipped.  Yasaka’s table manners, however, are amusing, as he noticeably slurps his noodles while instantly devouring a meal in seconds.  Still unconvinced, Akié remains suspicious of his presence until Yasaka takes an interest in Hotaru and teaches her a melodic song to play on the harmonium, which she eagerly wants to play at her recital.  In fact Yasaka develops a closeness to Hotaru that is missing with her own father.  As if that’s not enough, he makes flirtatious moves on Akié as well, who at first seems open to the idea, a comment on her diminishing relationship to Toshio, but then firmly slaps him on the face, a jolt that seems to kickstart the film into another gear.

While the first hour cleverly reveals the hidden illusions of a marital couple, where the stranger pinpoints and accentuates their weaknesses, we also learn bits and pieces of Yasaka’s unraveling mystery, namely that he served eleven years in prison for murder.  Without warning, the pace of the film quickens for one chilling moment that is simply shocking.  Coming on the heels of the slap, and the revelations of his prior crime, Yasaka suddenly finds himself in a precarious position hovering over a fallen Hotaru and disappears from sight, where she is never the same afterwards.  One mysterious event shakes the family’s tenuous equilibrium, leaving them heartbroken and despondent, as if touched by a permanent stain of guilt that they can’t wash away, though we see Akié constantly scrubbing her hands in Lady Macbeth style, refusing to allow anyone to touch her, as her obsession with momentarily failing her daughter can never be scrubbed clean.  The film jumps ahead another eight years with the arrival of another new young worker, Takashi (Taiga), who seems helpful and respectful, until they learn of his connection to the past.  As if resurrected by their own internal shame, the film suddenly surges into foreign territory, becoming wracked with tension, with the family descending into a neverending pit of emotional chaos, with viewers along for the ride, as Toshio and Akié sense the unseen presence, once again, of Yasaka drawing near, throwing the family into disarray.  With waves of dread creeping back into their lives, the couple is tormented by their past, revealing scenes of searing emotional power, as they are quick to search for answers.  Believing Yasaka may be living nearby, they curiously explore what appears to be a pristine Japanese neighborhood that could be the subject for wood prints or brush paintings, as the wooden houses blend so perfectly into the abundant foliage of the hilly landscape, with few roads or sidewalks, like a throwback to the interior of Japan before modernization, just a gorgeous, beautifully developed paradise on earth.  They believe they hear the sound of Yasaka’s song that he played on the harmonium, as if calling out for them, or it may simply be their own drudged-up memories coming back to haunt them, as they are shaken to the core, unable to distinguish between reality and fantasy.  Elegantly shot by Kenichi Negishi, the formal minimalism includes a few startling cuts, where the sheer look of the film grows increasingly impressive.  A film about guilt, sexual repression, and personal boundaries, when there is a violation of personal space, an inevitable explosion occurs, where by the end of this film it’s hard not to feel like something extraordinary occurred.
Posted by Robert Kennedy at 12:02 AM