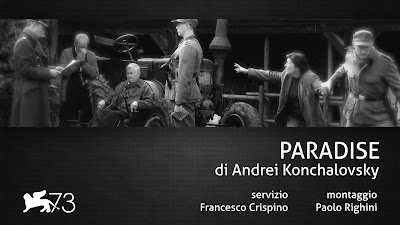 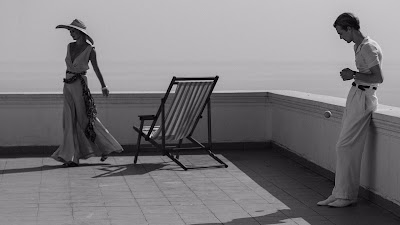 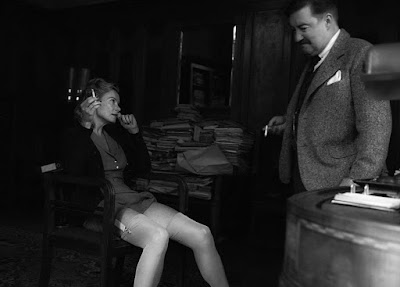 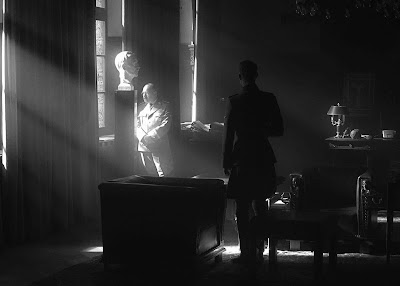 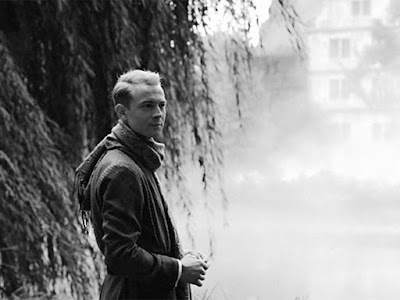 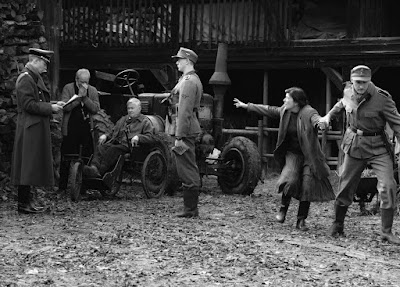 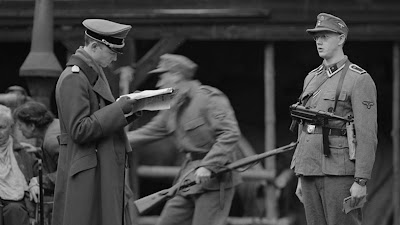 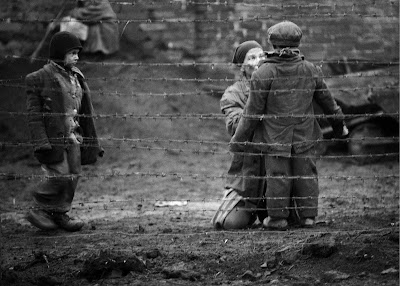 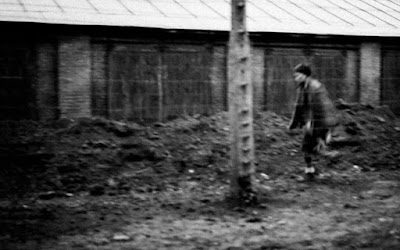 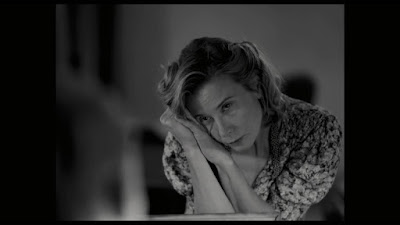 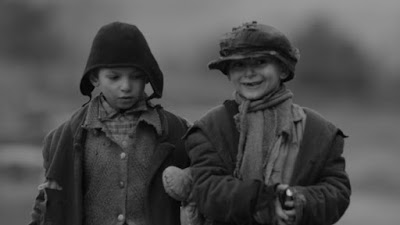 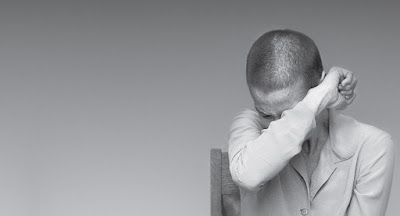 A revisionist film that appears to be a fairly blatant attempt by Russia, in other words Putin, to rewrite history and place themselves in a better light on the Holocaust, all of it staged in a historical setting, shot entirely abroad, where the characters and languages spoken are largely French and German, where until a message at the end about Russians saving Jews in the Holocaust you’d be hard pressed to even realize this is a Russian film.  Let’s start with the director, born into an aristocratic family that can trace their roots back to the Grand Duchy of Lithuania, son of author Sergei Mikhalkov, who according to a Wikipedia entry, “ingratiated himself to Stalin, Brezhnev and Putin, whose work appeared frequently on the front page of Pravda, writing three different versions of the Russian national anthem, while also taking the side of the state in the campaign against Boris Pasternak, as well as the campaign against Alexander Solzhenitsyn, receiving the Stalin prize three times.  In 2005 Putin bestowed upon Mikhalkov the Order of St Andrew, Russia’s highest award, for his services to literature.”  Konchalovsky was a compatriot of Andrei Tarkovsky, who he met at VGIK, the major state film school in Moscow, actually collaborating on Tarkovsky’s student film, THE STEAMROLLER AND THE VIOLIN (1961), also Ivan's Childhood (1962), and co-wrote ANDREI RUBLEV (1966).  He is perhaps best known in Russia for his epic historical film SIBERIADE (1979), while he went on to direct such forgettable American action films like TANGO & CASH (1989), but he also made the outstanding backwoods bayou classic SHY PEOPLE (1987), an art film starring Barbara Hershey and a teenaged Martha Plimpton, listed as #4 on Roger Ebert’s list of Best Films in 1988 (Roger Ebert: 1967-2006).  Konchalovsky really hasn’t made a notable film in decades, so his resurgence with this film, a shared winner of the Silver Lion for Best Director at Venice, is something of a complete surprise.  Selected as the Russian entry into the Best Foreign Film category of the Academy Awards, it feels a bit like a gimmick film, where its motives and possible connections with Putin’s global disinformation campaign are questionable, where red flags are waved all over the place with this film, where it’s hard to believe any historical view coming out of Russia today doesn’t have Putin’s tacit approval, creating a high degree of suspicion.

Even if those suspicions are unwarranted, this is a less than impressive film, one that attempts to “humanize” at least one high-ranking Nazi SS officer, one of the three central characters, laughably suggesting his aristocratic background and his love of Chekhov would not allow him to carry out Jewish extermination, resorting to excessive melodrama and major overreach by the end, as if crying out for attention.  Presumably Konchalovsky would also like the Russians included in Renoir’s humanistic portrayal of a fading aristocracy in THE RULES OF THE GAME (1939).  If only it were that simple, where knowledge and understanding might actually play a part in human history “before” it plays out, preventing wars and innumerable deaths, where perhaps that’s the imaginary Paradise referred to in the film’s title, with Konchalovsky creating a double entendre.  Well that is an idealization, and one that shares little in common with the trappings of world history.  Largely a vehicle for Konchalovsky’s wife, actress Julia Vysotskaya, the black and white film uses a confessional device, where those already arrested are held for questioning, which the audience presumes is part of a larger police inquiry, using three interrelated characters staring straight at the camera recounting their stories of what happened to them during the war, which is then shown in flashback imagery, comprising the basis of the film.  Shot by Alexander Simonov with a combination of 35mm and 16mm film, reproducing the aesthetics of war photography in the 40’s, we are introduced to Jules (Philippe Duquesne), a French collaborator with the Nazi’s, Olga (Vysotskaya), a Jewish/Russian aristocrat and member of the French Resistance, and Helmut (Christian Clauss), a Nazi SS officer.  Olga is arrested for hiding Jewish children in a raid, interrogated by Jules, a French officer who offers leniency for sex, but before he can carry out his plan he is shot by Resistance fighters.  Olga and the protected children are sent to the concentration camps where she encounters Helmut, a former love who revives his interest in her, though she’s a prisoner in a concentration camp he’s assigned to oversee.  All three are portrayed as traitors to their respective nations, with Jules cooperating with the occupying invaders, Olga, a one-time Vogue fashion editor, flees her homeland in pursuit of aristocratic, petty-bourgeois values, while Helmut’s resuscitated love for Olga, who he was once madly in love with, can save her from the wretched hell of the concentration camps.  And all three had their own views of paradise, where Jules simply wanted to be part of a closely-knit family, Olga tried to create a refuge for Jewish children, while Helmut’s paradise was fulfilling the German dream of a nation consisting entirely of an Aryan master race, proclaiming “I don’t have to justify my actions. I’ve become an Übermensch.”

Following in the footsteps of last year’s Cannes favorite, a stylistically inventive Holocaust film by László Nemes Son of Saul (Saul Fia) (2015), Konchalovsky, along with co-writer Elena Kiseleva, create another unique scenario to address the most horrifying moment in human history, suggesting the extermination of millions of Jews occurred because they didn’t fit the Nazi ideal of a perfect German paradise.  The ease with which this was accomplished, the hateful thinking, the atrocities committed, the complicity of collaborators, and the true horrors that occurred reveal the depths of mankind’s capability for evil, the power of which is unlike anything else in human history.  In contrast, the film’s artificial structure, largely ignoring the horror of what happened in the camps, moving back and forth between staged interrogations and recreated flashback sequences, where one is constantly interrupting the other, creating, in effect, an invisible wall distancing viewers from the characters onscreen and their projected emotions, hindering any narrative flow, all but taking the air out of the balloon with each fragmented segment.  Making matters worse, the poor sound synchronization, including very conspicuous dubbing, is extremely noticeable, along with a stream of scratched film and abrupt rough cut edits that are meant to simulate raw archival footage, all serving to highlight intentional flaws that pop-up and reoccur throughout the entire picture, which has the damning effect of continually breaking one’s concentration to what’s happening onscreen, not to mention staging a contrived romance between a prisoner and an SS officer, feeling more like the director is using a gimmick to address history.  Despite the director’s supposed propensity for authenticity, forcing the editor to review untold hours of wartime newsreel footage, handing actor Christian Clauss a compulsory reading list of about 40 books to read ahead of time, or having his wife shave her head to play the sacrificial role of Maria Falconetti as portrayed in Dreyer’s THE PASSION OF JOAN OF ARC (1928), none of this matters when the stagey structure itself subverts the film’s actual intent.  Arguably the most striking look of the film comes from the staggering production design of Europe’s aristocrats before the war, dressed in white suits, straw hats, smoking cigarettes and sipping wine on the terrace overlooking a placid lake, and saying things like, “He knows and appreciates Brahms and Tolstoy,” where you expect to see F. Scott Fitzgerald, Ernest Hemingway, Josephine Baker, Gertrude Stein, or Picasso, as none of them seemed to have a care in the world, yet this is strangely interjected into a memory play about the historical effects of the Holocaust, where at least one SS officer comes to realize Hitler’s utopia is a sham, hoping to usher his love out of the hell of the death camps, yet remains utterly paralyzed once he realizes the Nazi dream is doomed.  The big reveal at the end only adds to the detrimental artificiality of the film’s design, feeling more like a stunt.  A cold and alienating portrait, none of this feels remotely convincing.
Posted by Robert Kennedy at 12:01 AM