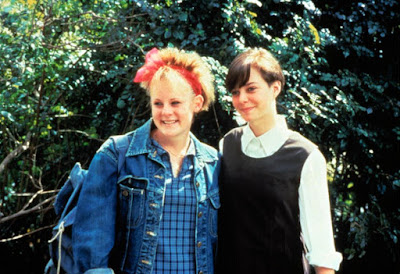 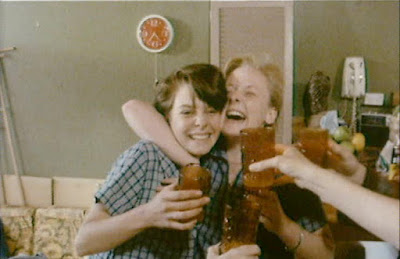 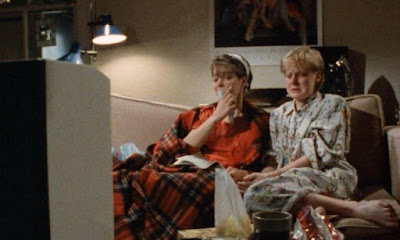 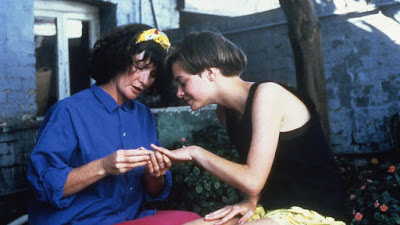 Hard to believe this was made thirty years ago, yet this is an early, rarely-seen, first feature film by Jane Campion, screening at the Un Certain Regard section at Cannes, originally made and broadcasted on Australian television in 1986, the same year CROCODILE DUNDEE rivalled TOP GUN for top grossing films of the year, Spike Lee made his first film SHE’S GOTTA HAVE IT, Mike Tyson became the youngest world heavyweight champion ever at the age of 20, Philippe Petit audaciously walked a tightrope hastily strung between the two twin towers of the World Trade Center in the early morning hours high above New York City, Cory Aquino was elected President of the Philippines, the first female President in Asia, toppling the 21-year authoritarian rule of Ferdinand Marcos, where Time magazine named her “Woman of the Year,” but it was also the year the space shuttle Challenger exploded shortly after liftoff killing the crew of 7 astronauts, the worst disaster in the history of the American space program.  An understated portrait of adolescence with complex and subtly developed relationships, a trademark of Campion’s defining works, the film portrays the decaying relationship between two 15-year old girls, the straight-laced Louise (Emma Coles) and her more rebellious, punk friend Kelly (Kris Bidenko).  Focusing on small personal details contrasted against the authoritative influence of their parents, the story reflects the changing nature of their relationship, where the brilliance of the narrative is that it’s inventively told backwards, much like Gaspar Noé’s Irreversible (Irréversible)  (2002) and François Ozon’s 5 x 2 (2004), so as the film continues, they get younger, happier, and much closer together.  The film wasn’t released in the United States until 1996, making critic Amy Taubin’s #6 film of the year, Amy Taubin's Top Ten Lists 1987-2005, yet it certainly exemplifies Campion’s typical fragmented structure, including language, which is often unintelligible at first and hard to follow, where the use of subtitles can be of considerable assistance to American audiences, while also presenting heroines that don’t conform to existing societal norms, often rebelling against male paternalism, where the childhood friends are mismatched, like the siblings in Sweetie (1989), yet the offbeat character of Kelly sets the precedent for the remarkable emotional range of mental disturbance expressed by Sweetie (Genevieve Lemon) in Campion’s next film.

Ozon was inspired by the realisation that he knew few people whose relationships had lasted more than five years. “I wanted to ask why people find it difficult to maintain a relationship for 10, 15 or 20 years, like our parents did. Because the story was about something ending, I wrote the end first. Then I realised that was the starting point.”

Telling the story in reverse order allowed Ozon to scatter clues to the marriage’s failure for us to collect backwards — like following a trail of pebbles in a forest, as he puts it. We’ve seen the reverse structure applied to the thriller (Memento) and, in Gaspar Noé’s Irréversible, to the po-faced contention that “time destroys everything”; Ozon brings a simpler, though no less caustic touch to the technique. He acknowledges two models in particular: Harold Pinter’s play Betrayal and Jane Campion’s 1986 TV film Two Friends. Otherwise, his key references in diagnosing the conjugal malaise are Bergman’s Scenes from a Marriage and Maurice Pialat’s Nous ne vieillirons pas ensemble (We Won’t Grow Old Together); Ozon says he could easily have borrowed either title. “What I love about the Bergman film is that he conducts a sort of autopsy — he goes where it hurts.”

5 x 2 may be classical in tone, but it remains experimental in method. It was shot in reverse chronological order, and neither Ozon nor the actors knew where they were heading. He started by filming the first three sections, then stopped for four months to edit what he had and write the rest.

Written by Helen Garner, one of Australia’s greatest writers, showing enormous range in her work, utilizing what’s described as a savage honesty, where Australian literary critic Peter Craven writes that “Two Friends is arguably the most accomplished piece of screenwriting the country has seen and it is characterised by a total lack of condescension towards the teenage girls at its centre.”  With an oblique, puzzling, and often abstract narrative at the outset, with characters that only slowly come into view, where a young girl’s funeral from an overdose draws together disparate forces, where the presence of punks in weird hairdo’s are hanging out alongside conservative establishment figures, each carefully avoiding the other, all contributing to a working class world of detachment and emotional discord.  When we first meet the two girls, it’s in the past tense, as they are no longer friends and seem to be living entirely different lives, where Kelly’s name comes up in the form of friendly gossip, a girl that was once a fixture in their home, as suddenly the ears perk up for both Louise and her divorced mom Janet (Kris McQuade) who want to know all the details, which are decidedly slight, though rumors suggest she may be living a drug-addled life with friends in abandoned buildings.  The funeral comes to represent the death of a close-knit relationship between two teenage girls, as the dire outcome foreshadows what possibly lies in store for Kelly.  While Louise has a more supportive environment, she’s disciplined, conscientious, and self-aware, an obedient child that always makes sure she does her homework, while Kelly is a restless soul, rebellious and irresponsible, who impulsively can’t wait to stray into the world of sex, alcohol and drugs, often distancing herself from Louise in social circles, as she instead gravitates towards the boys.  Campion has experiences of teenage girls cropping up throughout her films, as they are the formative years that have such a strong influence on the person they eventually become.  Perhaps what draws these girls together initially is the shared experience of puberty, having a friend and ally to help you navigate your way through the social minefields.  Unlike Louise, who has a relatively calm and unadventurous middle class life, Kelly’s home is an incendiary picture of working class discontent, with her mother (Debra May) remarrying an unsympathetic jerk named Malcolm (Peter Hehir), likely a former radical who is now disillusioned, whose self-righteous, authoritative manner and domineering presence controls their lives, never bothering to listen, but making judgments all the time, forcing others to live by his rules.  As a result, Kelly spends plenty of sleepovers with Louise, where her less combative home is like a shelter from the storm.


As raw and graphic as Terry Zwigoff’s Ghost World (2001), Campion has a clever way of revealing the discord in the form of a letter Kelly sends to Louise on her birthday, where Kelly’s already left her home, living on the streets, where we hear Louise reading the contents, with her friend claiming “So far so good.  I’m not yet a junkie or a prostitute.”  But Louise grows distracted or loses interest and instead starts a mechanically repetitive piano lesson, where we hear Kelly’s voice continue reading the unfinished letter, yet can’t be heard over the clamor of the musical notes.  This uncomfortable dissonance shows just how far they’ve grown apart. While much of the material is unveiled in a near documentary manner, it’s filled with ordinary moments where kids are being kids, seen gleefully going shopping or sprinting through the shopping malls, where every moment feels like an inspiration, while parents are always an awkward presence in their lives, where everything slows down and becomes dull to the senses, like something to be endured between the more exhilarating and ecstatic moments when kids simply run free.  Each of the teenage girls seems to bring out something from the other, as they’re both obviously smart, where early on they both can’t wait to go to high school together, seen gabbing away in their drab school uniforms, where Kelly is every bit as smart as the more conventional Louise, but you’d never notice as she’s such a wild child.  But Kelly’s dreams are obliterated by Malcolm, her stepfather, whose abusive treatment includes his refusal to allow her to go to the school of their choice, which is a school for gifted students that must pass an entrance exam.  Claiming the school is reactionary and elitist (and it may be, but it also provides the most challenging student option), he infuriatedly expresses no wiggle room, where this turns out to be the single most drastic event that leads to their separation, as they end up at different schools.  Moving backwards in time, the two become more and more alike, sharing the same dreams, as it seems the girls are inseparable, where Kelly is like a member of the family, with Campion shifting from social realism to more colorful fantasy sequences with the girls play acting their hopes and fears, using a variety of techniques, including speeding up the frames, using different film stocks, garish colors, animation, coloring within the frame, stop-motion photography, all of which add a jubilant spirit of childlike innocence and giddy exhilaration, a beautiful expression of childhood’s fleeting moments, yet it’s also a wonderful eruption of abstract cinematic expressionism.  The tonal shift exerts its power on the viewers, causing a dizzying rush of euphoria, leaving the two in a freeze frame of unbridled joy, a celebratory moment when both have passed their entrance exams with the families gathered around drinking congratulatory champagne, capturing a remarkable moment where the future never looked brighter.
Posted by Robert Kennedy at 12:05 AM