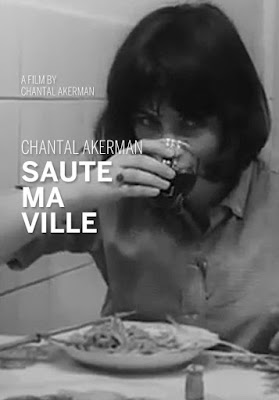 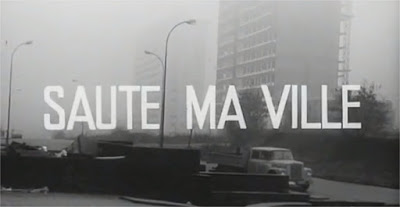 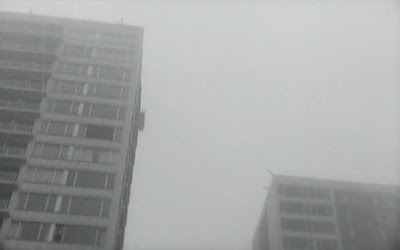 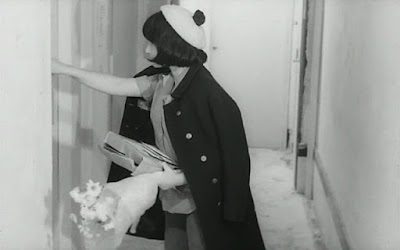 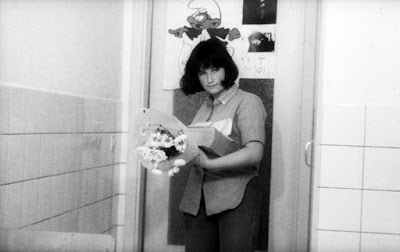 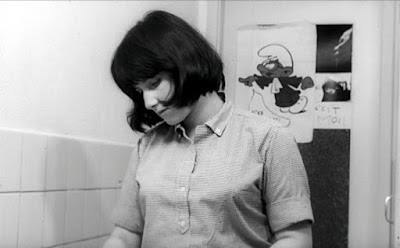 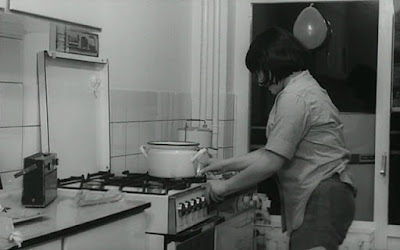 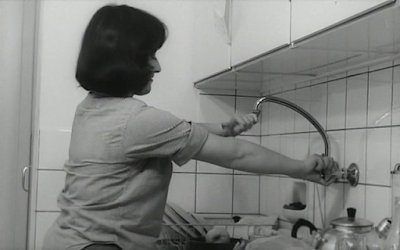 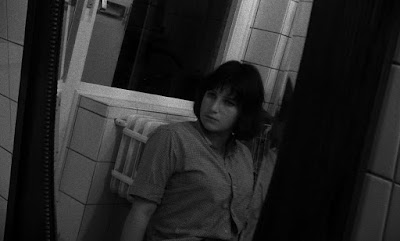 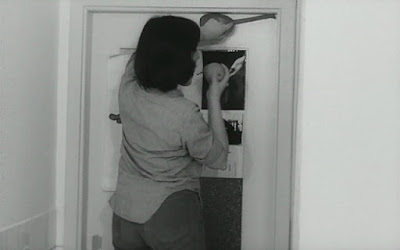 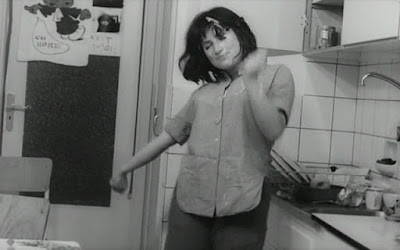 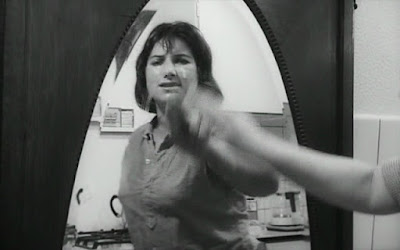 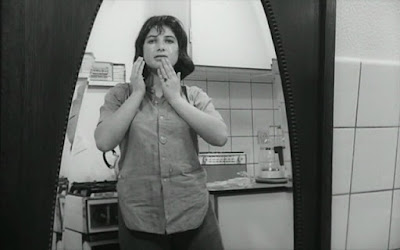 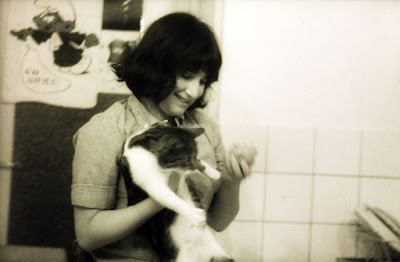 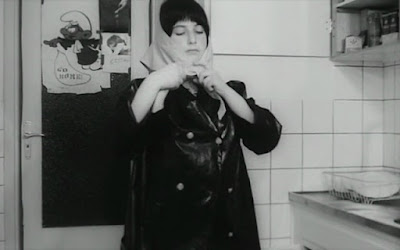 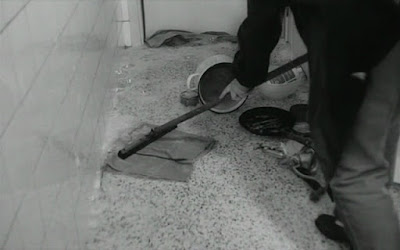 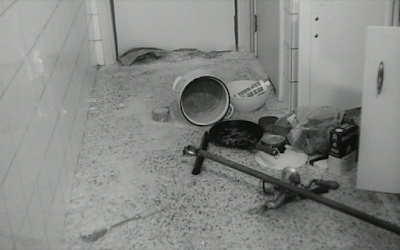 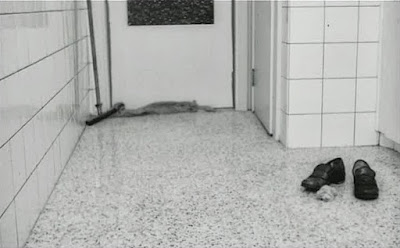 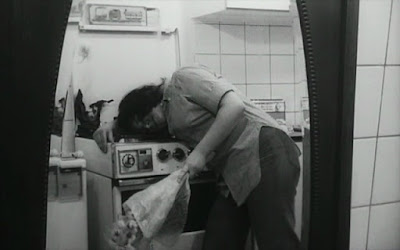 A whimsical short starring the perky director herself at age 18, feeling very much in the moment of the French New Wave, made in one night with no retakes, heavily influenced by having seen Godard’s PIERROT LE FOU (1965), feeling more like a mad rush of combustible energy, yet for the first time in her movie experience Godard allowed her to view cinema as an art form, where she suddenly had the freedom to express herself, though in a 2010 interview with Sam Adams at The Onion, AV Club interview with Akerman, “I have told that story one million times.  And I am so angry at Godard that I don’t even want to think about it.  Because he is getting to be such an asshole now, and he’s anti-Semitic.  He gave me the push, but that’s it.”  Dropping out of high school, she enrolled in film school at the INSAS - Institut Supérieur des Arts in her native Brussels, but also dropped out after a few months, making her directing and acting debut with this short film, an apocalyptic romp with a Godardian sneer of contempt, expressing her views of a woman being cooped up in the kitchen all day, refusing to allow her gender to be shackled, like previous generations, and literally blowing up the stereotype, where themes of feminism, suicide, and mental health are all jumbled together.  With tongue in cheek, this absurd black comedy makes a statement of liberation through annihilation, perhaps more in debt to the mad antics of Věra Chytilová’s film DAISIES (1966), a key feminist film in the Czech New Wave movement that was banned for potentially inciting a riot, where art stands for obliterating the banal routine.

Described by Akerman as “the opposite of Jeanne Dielman, that was resignation. Here it is rage and death.”  Something of a shock to the system, resorting to a kind of punk nihilism in the climax, Akerman’s film is all about destroying old models in order to make way for something new, no longer accepting the domestic acquiescence that their mothers and grandmothers were forced to endure, where the kitchen is viewed as a feminist battleground, a place where you could go mad, as her character literally comes unhinged.  With a free-spirited tone of casual indifference and nonchalance, a young woman played by Akerman herself breezes into her apartment building, humming loudly, seemingly youthful and carefree as she picks up her mail, goes into her kitchen, locks the door, seals the edges with tape, ignores the phone ringing, and cooks a pot of pasta.  Feeling like performance art, a kind of provocation, she strangely puts on a raincoat and makes a concerted effort to do the dishes, but fails miserably, growing increasingly agitated, still humming, occasionally breaking into recognizable notes, singing “la la la la la la,” where all the pots and pans end up on the floor, yet she makes a concerted effort to scrub the floors clean, which includes polishing her shoes, which extends to her legs, before squirting lotion on her face, making faces in a mirror before writing the message “It’s all over” on the mirror with lotion, more of a pointed reference to the past than any cryptic message about what she’s about to do, which is light a paper on fire and turn on the burners on the stove, laying her head down, curled around the flames as she waits for her death.  The film ends with a gigantic explosion, though we still hear her singing her little tune before reciting the credits.

A clue to the film’s absurdly comical mood is a cartoon Smurf on the kitchen door that reads, “Go Home!”  Expressing sheer irreverence and a sense of anarchy, the film blends comedy with an unmistakable anxiety, making an apocalyptic comment on the juxtaposition of seemingly ordinary spaces with extraordinary inner conflict, reinforced by Akerman’s signature style of claustrophobic framing and oblique camera angles.  The film expresses not only dissatisfaction with the norm, but alienation, conveying a particularly feminine sense of isolation and ambivalence, where it’s important to understand Akerman never saw herself as a “feminist” or “gay” artist, refusing to allow her films to be screened at gay film festivals, contending “You wouldn’t say of a Fellini film that it’s a male film … When people say there is a feminist film language, it’s like they’re saying there is only one way for women to express themselves.”  Akerman’s films, however, are highly personal statements, more like intimate essays than fictional works or documentaries.  In keeping with the times, the late 60’s and early 70’s was an emancipating era, where it was important for individuals to rediscover their own identity, not the one handed down from past generations, but something new and liberating.  Easily missed in the title sequence is a dedication, as the film is dedicated to Claire, most likely Claire Wauthion, a French actress with whom she was involved in real life, shown having sex with her at the end of JE, TU, IL, ELLE (1974), suggesting that at least in Akerman’s eyes, this “Chaplinesque” farce that mocks obsessive housekeeping with its own hilariously energetic yet disastrous attempts at it, is probably a love poem to her girlfriend at the time, describing it in an interview with French art critic Élisabeth Lebovic in Maniac Shadows - Kunstenfestivaldesarts | Kunstenfestivaldesarts as her “queerest movie.”

Akerman saw Pierrot le fou by chance when she was 15; she had never heard of Godard and she didn't think much of movies. The experience led her to realise that she wanted to make films that, like Godard's, would carry an erotic charge of immediacy, would be "like talking to one person". She made her audacious gem of a first film - Saute ma ville (1968, 13 minutes) - when she was only 18, in 35 mm, with no money and no institutional support. "One day I wanted to make a film about myself. That was Saute ma ville. I needed a camera, some film, some lights and someone to operate the camera. I asked somebody I knew if he would help me make the film and somebody else loaned me a camera, we bought a little film stock and we made the film in one night. And then I edited it." Akerman had spent several months in a Brussels film school (INSAS) before she dropped out because she wasn't allowed to plunge immediately into film-making. But even after she had completed Saute ma ville no one around her believed she was a film-maker. Her sense of isolation and uncertainty was so great that she left home for Paris, where she stayed for two years. She wanted to work in films but she didn't know how.

Akerman describes Saute ma ville as follows: "You see an adolescent girl, 18 years old, go into a kitchen, do ordinary things but in a way that is off-kilter, and finally commit suicide. The opposite of Jeanne Dielman: Jeanne, that was resignation. Here, it is rage and death." The adolescent is played by Akerman. The film is structured around ordinary domestic routines; the humour, or horror, emerges from the way simple tasks veer out of control. The girl 'sings' (la-la-la-la) with the intrusiveness of a troubled child vying for attention; every gesture looks like the externalisation of psychic implosion, for instance, her disturbing dance with her mirror image. The girl's dislocated activity is the despairing prelude to suicide. The explosion that blows up not only "her city" but first of all herself is set off when she sets fire to a letter (which we cannot read) as she leans over the stove with the unlit gas turned on full blast. A sound-image carried over from this scene opens Jeanne Dielman: before the names appear in the credits the loud sound of a jet of gas can be heard, a noise repeated every time Jeanne turns on the stove.

Saute ma ville sat in a lab for two years because Akerman didn't have the money to claim it and because she was so uncertain about its worth. Finally, when the head of the lab told her to take it away, she asked him to watch it and give her his opinion. Not only did he like it, he also gave her contacts in Belgian television, which led her to Eric de Kuyper, who broadcast Saute ma ville in his Alternative Cinema series. The next day Akerman heard André Delvaux, Belgium's best-known film-maker, give her film a glowing radio review. Overnight she became "a film-maker", not least in her own eyes.
Posted by Robert Kennedy at 12:02 AM