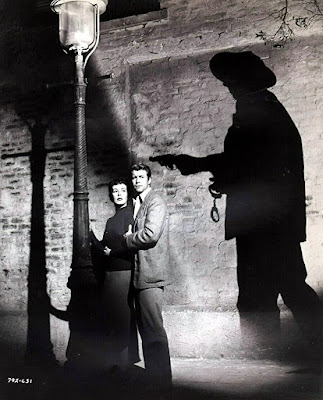 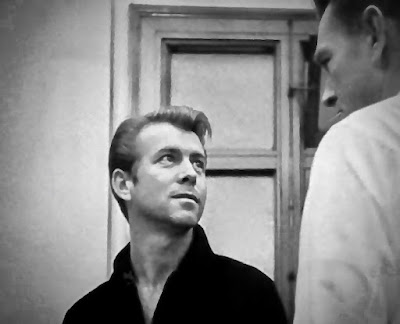 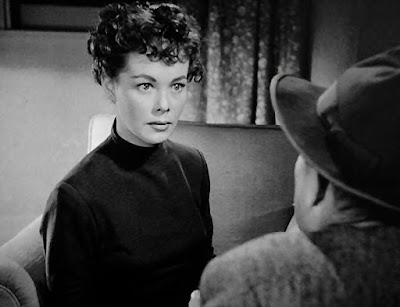 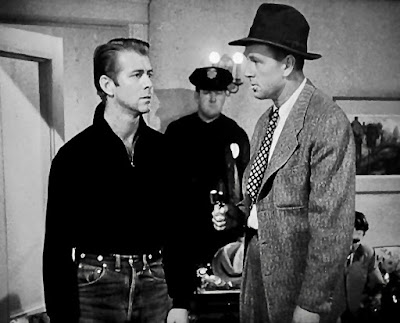 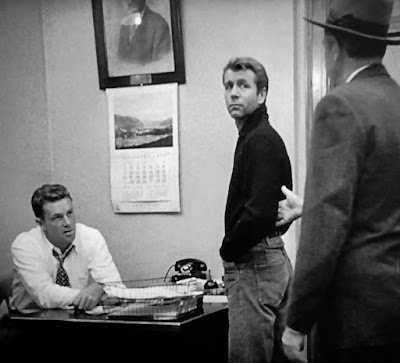 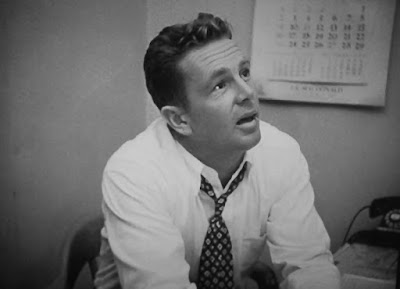 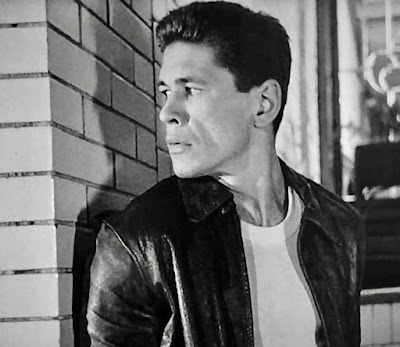 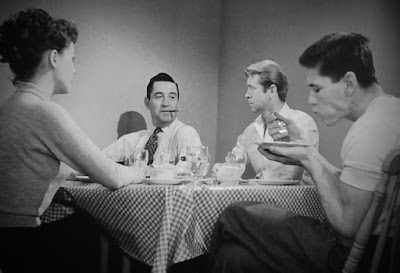 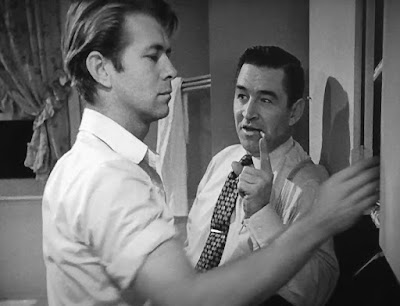 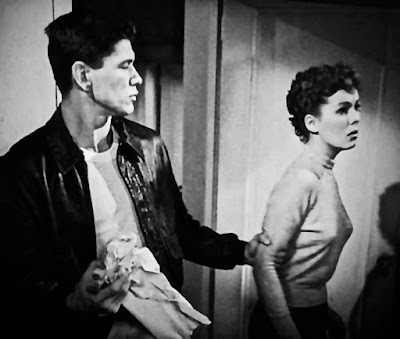 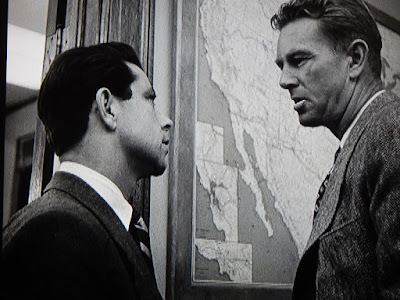 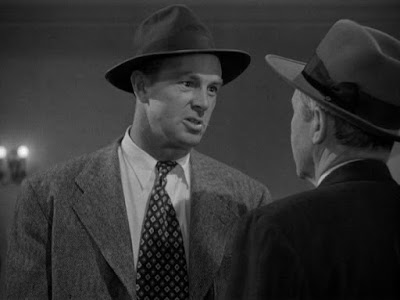 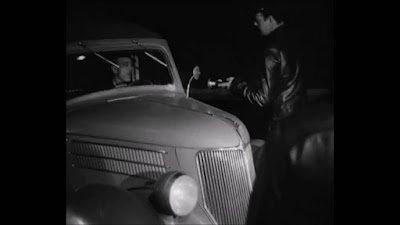 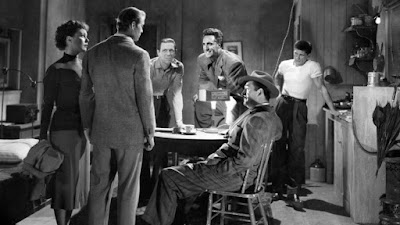 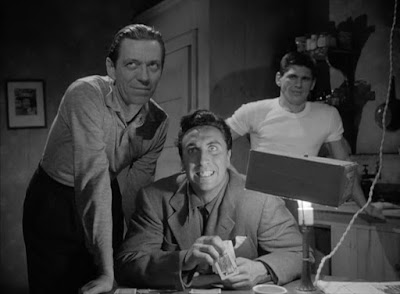 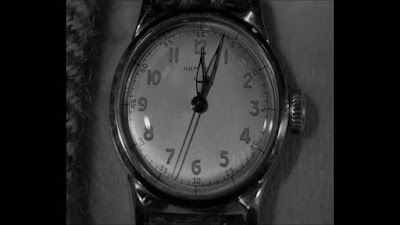 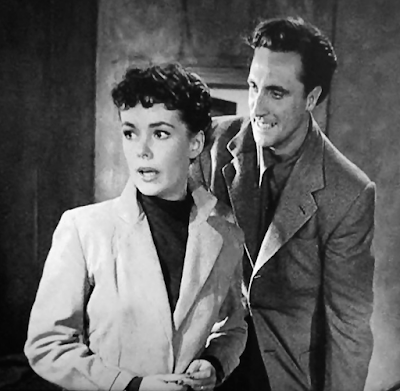 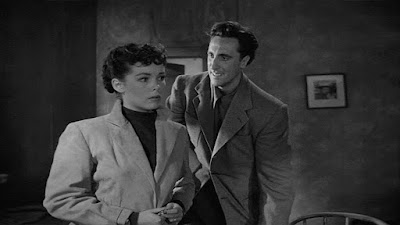 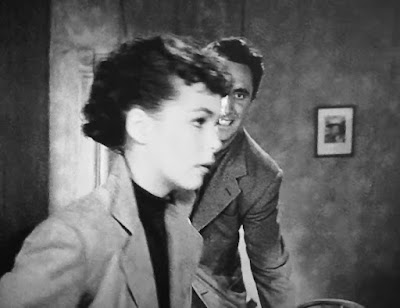 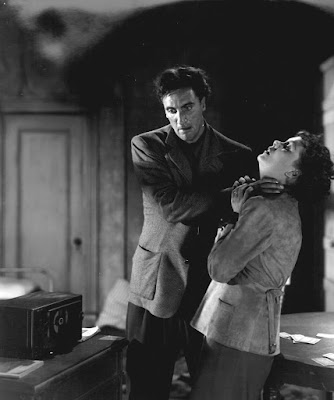 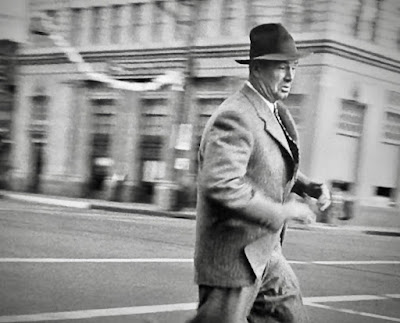 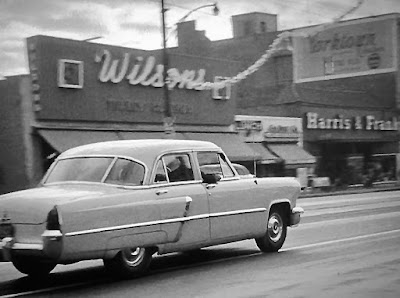 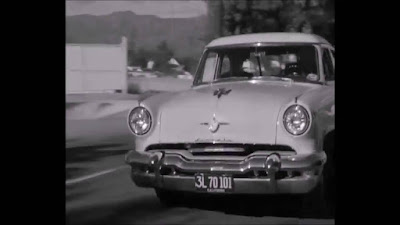 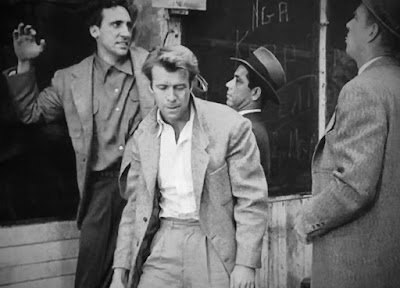 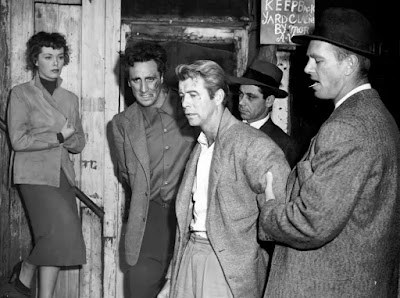 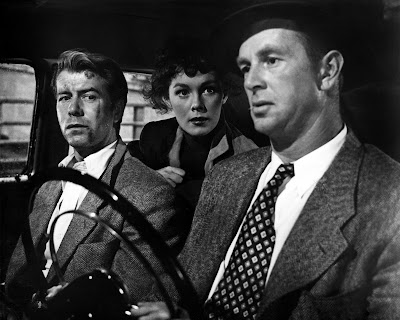 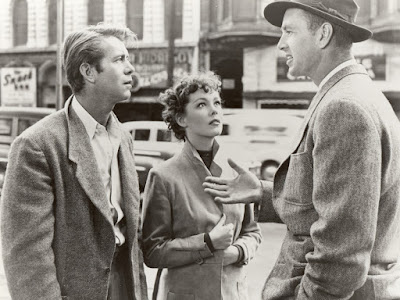 You know, it isn’t what a man wants to do, Lacey, but what he has to do.  Now take me — I love to smoke cigarettes, but the doctors say I can’t have them.  So what do I do?  I chew toothpicks, tons of them.
—Detective Lieutenant Sims (Sterling Hayden)  Note – de Toth refused to allow Hayden to smoke on the set, hoping to contribute to an extra level of grumpiness and hostility from Hayden’s performance

A film that wastes no time getting into the heart of the action, becoming a fast-paced, hard-edged crime caper, an obscure, underrated low-budget noir thriller that unfolds in something approaching real time, a formulaic story driven by detail, shot with visual flair and a heavy dose of authenticity, highlighted by tough-as-nails Sterling Hayden as Detective Lieutenant Sims, an intimidating presence, always shot from a low angle by cameraman Bert Glennon, making sure he towers over everyone else, a cop on the case who wants to use ex-felons as stool pigeons, a model for CHINATOWN (1974) and L.A. Confidential (1997) in the stark realism and use of actual shooting locations, featuring an all-too-jaded Los Angeles landscape.  Directed by Hungarian émigré André de Toth, who lost his sight in one eye from a childhood accident, wearing a black eyepatch, which nearly cost him his life, according to his own personal memoirs entitled Fragments: Portraits from the Inside, as he was kidnapped while scouting for locations in Egypt shortly after the the Yom Kippur War of 1973, pistol-whipped and beaten to a pulp during a fierce interrogation session, mistaken for Moyshe Dayan, Israeli General and Defense Minister, released only after an examination of his genitalia revealed he wasn’t even Jewish.  After obtaining a law degree in Budapest, he wrote plays and worked in the theater before making the jump to movies, making seven Hungarian films before fleeing the country when he was forced to direct Nazi propaganda movies, eventually making his way to Hollywood where he directed the searingly intense war drama NONE SHALL ESCAPE (1944) before pivoting to making a series of grim, psychological westerns.  Marrying screen siren Veronica Lake, he retained a strong Hungarian accent, cut from the same mold as other hard-living men like John Ford or John Huston, where he was known in Hollywood as a cowboy, painter, and sculptor, developing a reputation as a thrill-seeker who piloted his own airplanes, drove race cars, and loved playing polo, marrying seven times with 19 children.  When offered the film, the studios wanted Humphrey Bogart and Ava Gardner to star, anticipating a 35 day shoot.  The director refused to use big named stars, preferring more autonomy on the set and the ability to select his own cast.  Jack Warner threw a fit, cutting the budget while reducing the film shoot to just 15 days, and then didn’t release the film until 2 years after it was completed, perhaps out of spite.  But this film, an intense psychological study of crime and punishment, caught the attention of not only Stanley Kubrick, using many of the same themes and actors in THE KILLING (1956), including its documentary visual style as well as the impossible notion of pulling off the “perfect crime,” but it was also one of the favorites of Jean-Pierre Melville, listed at #4 on a list compiled by crime writer James Ellroy, James Ellroy Selects His Ten Favourite Crime Films – July '98.

Adapted from the short story Criminal Mark by John and Ward Hawkins, originally appearing in The Saturday Evening Post, the film opens from the back seat of a car, much like the heralded scene in Gun Crazy (1950), now standard Hollywood procedure as the car pulls into a gas station, where we hear the radio sounds of Doris Day singing George and Ira Gershwin’s Doris Day - S'Wonderful - YouTube (1:36), and right off the bat the lighthearted mood disappears when something goes terribly wrong during a heist, making off with only chump change, but shooting a cop, while one of the robbers takes a bullet to his gut, breaking up afterwards, with the injured man in a car while the other two exit on foot.  What sets this apart is the use of radio broadcasts, as immediately details go out over the police airwaves, identifying the location of the incident, a description of the robbers, and the make of the car, which repeats incessantly, adding the location of a stolen vehicle, as we see the woman speaking into the microphone relaying the messages, leading to the transmission inside the police station where Sims has been listening, setting up a perimeter around the stolen vehicle, including the names and addresses of former convicts.  With police roadblocks set up to block all avenues of escape, criminals routinely seek help and assistance from former convicts now on the outside, like their own version of the Underground Railroad, offering them protection and safety, though sometimes at the point of a gun, with suggestions that you can never outrun the mistakes of your past.  Rounding up the usual suspects and informers (actually borrowing footage from Gun Crazy), where routine police work is viewed as bullying reluctant witnesses, who appear as ordinary citizens, with the camera following Sims as he moves down a line of desks, one by one, each a revelation of harrowing backstories that feel as if they’ve been interrupted midstream, quickly realizing this is the work of a trio of convicts who recently escaped from San Quintin prison, doing a series of smalltime holdups on their way down the highway to Los Angeles.  Simultaneously, Morgan (Nedrick Young, blacklisted writer and actor), the wounded man, shows up at the doorstep of Steve Lacey (professional dancer Gene Nelson), a former convict trying to go straight, along with his assertive wife Ellen (model turned actress Phyllis Kirk), joined shortly afterwards by Otto Hessler (Jay Novello), another former convict, an alcoholic veterinarian who lost his medical license, summoned to patch up Morgan, but he dies before any work can be done to save him, with Hessler rifling through his pockets taking the money.  Sims hauls in Lacey, suspecting his involvement right from the outset, but he doesn’t squawk, so he learns little, letting him cool his heels in jail for 3 days before trying to enlist him to work a sting operation in San Diego, the most recent sighting of the convicts, but he refuses to play along, eventually releasing him.

The other two convicts are identified as the smooth talking ‘Doc’ Penny (Ted de Corsia) and his muscle, Ben Hastings (Charles Buchinsky, aka Charles Bronson), who circled back to LA, thinking the cops would never suspect to look for them there, hiding out in Lacey’s apartment, surprising him upon his return home, enlisting him in their foolproof getaway after pulling off a bank heist Penny has been planning for seven years, right down to the last detail, arrogantly thinking he can outsmart the cops, embracing the idea of the “perfect crime.”  Using Lacey’s pilot skills, their getaway includes flying safely into Mexico, as Lacey works nearby at a small airport as an engineer, knowing the ins and outs of the operation, including the security rounds, pulling him into their heist, threatening to harm his wife if he doesn’t play along.  Having no options, basically kidnapped at gunpoint, he becomes the getaway driver, quickly moving to new quarters where a lecherous ex-con Johnny Haslett (Timothy Carey) will keep a close watch over the wife while the heist takes place, refusing to release her unless the police radio confirms a successful getaway.  Another backseat camera leads viewers to the bank, circling around the block after dropping off Penny and Hastings, who enter as typical customers, while a third man Zenner (James Hayward) is disguised as a meter reader, entering through the back, cutting off the bank’s electricity at a designated time, when all mayhem breaks loose, with Lacey hearing the gunshots.  Using a series of rapid edits, the scene erupts into utter chaos with everyone caught offguard.  As Sims approaches Lacey sitting in his car, he speeds off, with Sims following in hot pursuit, making a mad dash back to his wife, who is being manhandled by Haslett when he arrives, quickly pouncing on him.  By the time Sims gets there, the two have tumbled down an outdoor staircase with police standing by (among the most incredible stairway falls in film history).  While an All Points Bulletin has been announced over the airwaves with Lacey “Wanted for Murder,” it appears that his worst fears have been realized, that Sims has him dead to rights, following his lead right from the beginning, believing “once a crook, always a crook.”  Despite Lacey’s insistence that he had no choice, Sims cuts him off, revealing the bank clerks were all planted cops, laying in wait for the outlaws, offering a perfect counter defense, which is like rewinding the crime scene in our heads, putting a different spin on each face.  At 73-minutes, set in an ever expanding nocturnal cityscape, the meticulous precision of the shot selection reveals an economy of no wasted material, finishing under budget and under schedule, shot in just 13 days, tense and suspenseful throughout, and still full of surprises, where Sterling Hayden, in particular, is terrific as the brash toothpick-chewing cop, used by James Ellroy as the model for hard-boiled cop Bud White in L.A. Confidential (1997).
Posted by Robert Kennedy at 12:03 AM