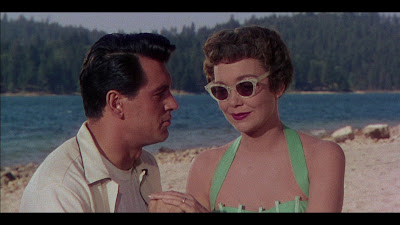 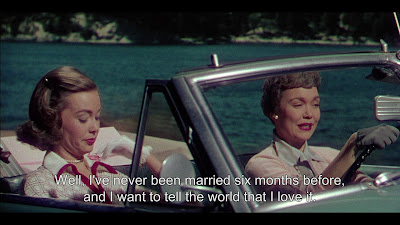 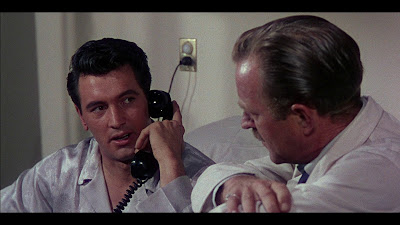 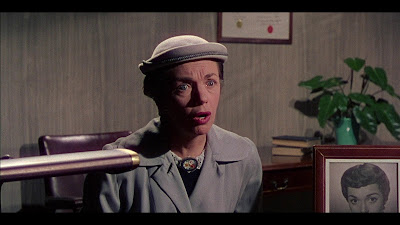 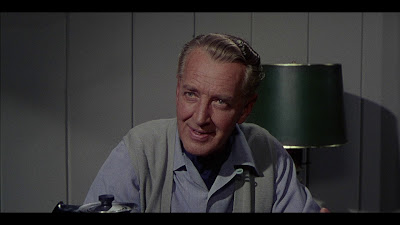 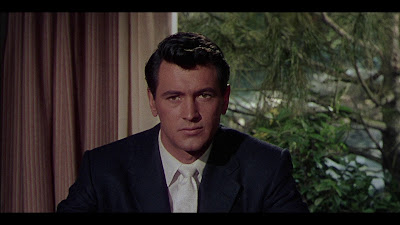 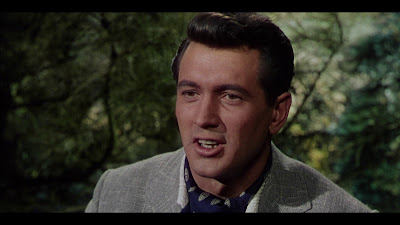 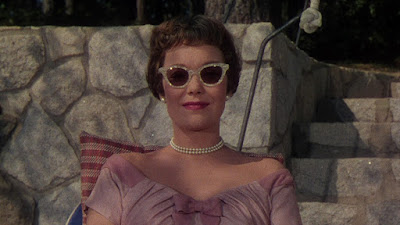 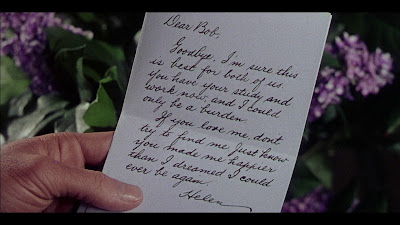 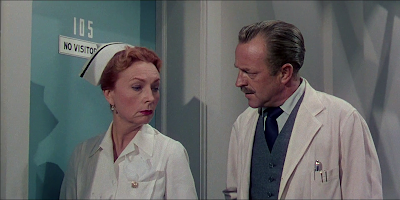 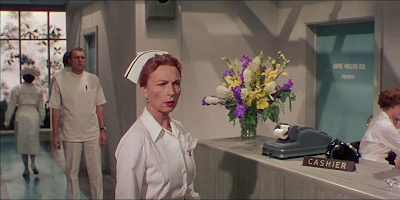 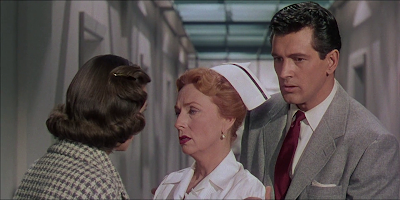 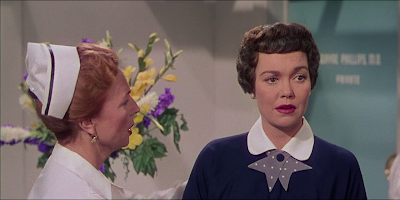 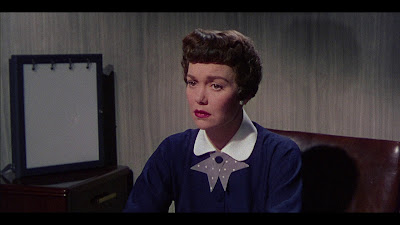 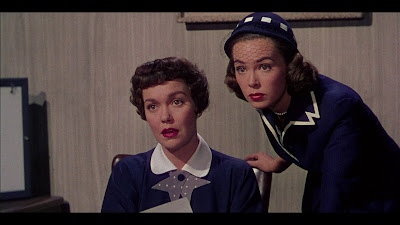 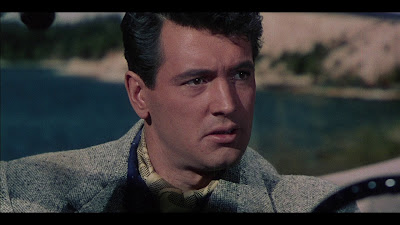 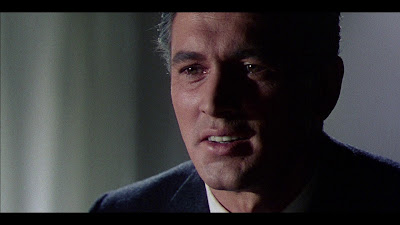 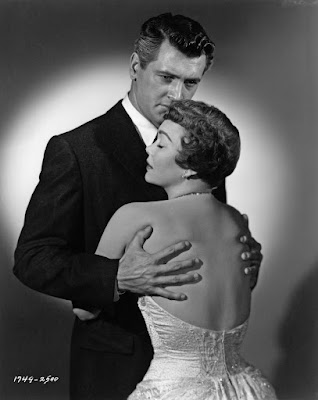 There is a wonderful expression: seeing through a glass darkly. Everything, even life, is inevitably removed from you. You can’t reach, or touch, the real. You just see reflections.          —Douglas Sirk, Sirk on Sirk

One of the granddaddy of Hollywood soaps, based on an earlier 1935 film version, this is the first of a series of Douglas Sirk films that features Rock Hudson in his first major starring role alongside Jane Wyman, given the full Hollywood treatment with this overblown melodrama shot in glorious Technicolor.  While this overtly fits into the women’s weepy category, with Wyatt the long-suffering woman who spends plenty of time in a hospital setting, the sentimentality factor has to be seen to be believed, complete with a lush orchestral score of strings with a women’s chorus rising above as if a cue sent from heaven on high.  Shot by Russell Metty, the color scheme alone and Sirk’s brilliant use of rear screen projection is enough to capture anyone’s attention in this or any era, actually standing out as pointedly vivid, distinguishing itself from other standard Hollywood fare by the sheer artistry of the composition.  The contrived narrative and rather stiff acting is another story altogether, and it remains an open question whether audiences in the 1950’s even understood what Sirk was getting at, as he’s intentionally hyper-accentuating certain characteristics of American middle class life, criticizing the smug, materialistic mindset of the 1950’s American dream, highlighting the tragedy in false ideals, something more like what a theatrical director would do, enlarging the size and noticeability of what’s shown onscreen, much like what’s depicted in magazine advertising.  Today, some might find it subversive and politically satirical, as it uses the very women’s film category that stereotypically depicts women in repressed, emotionally straight-jacketed roles in order to draw attention to women’s plight through this kind of idealized, artificial, over-stylized melodrama.  In the 50’s, the audacity of Sirk’s vision was sneered at and laughed at by many who simply felt this kind of over-exaggerated mush was patently absurd.   And to some extent, it is—which is precisely the point—as it intends to draw attention to itself.

Sirk was one of Germany’s leading stage directors and was schooled in German expressionism at the Berlin UFA Studios before fleeing Germany in the late 1930’s, making a few B-movies before this became the 2nd biggest box office hit of the year after THE ROBE in 1953.  Filmed in the early 50’s during the dawn of the television era, Hollywood needed to lure people out of the comfort of their homes back into the movie theaters again, creating lavish spectacles shot in Cinemascope that couldn’t be duplicated on their little black and white television sets.  Showcasing the onsite location of nearby Lake Arrowhead, California, not to mention the snow capped mountains of what is supposed to resemble Zurich, Switzerland, this is something of a visual travelogue that simultaneously accentuates a brilliantly colorful set design along with a bizarre but nonetheless darkly disturbing interior world, showing how the two can be completely at odds with one another.  Both Rainer Werner Fassbinder and Todd Haynes adore Sirk and have done more than anyone to keep the flame of Sirk alive in the medium.  Two of Haynes films are conceived with Sirk in mind, 2015 Top Ten List #6 Carol and FAR FROM HEAVEN (2002), while Fassbinder’s THE MERCHANT OF FOUR SEASONS (1971), THE BITTER TEARS OF PETRA VON KANT (1972), and ALI: FEAR EATS THE SOUL (1974) are all deeply in debt to Sirk, as Fassbinder in the 1970’s borrowed liberally from Sirk’s expressed use of screen artificiality to heighten the interior emotional reach of his melodramas, thoroughly embracing Sirk’s artistic vision, while at the same time the women’s feminist movement also discovered Sirk, suggesting he championed the idea that women didn’t always fit into certain prescribed roles in society, that there was an unseen psychoanalytical consequence in play under the surface which explains the heightened exaggerations.  Known for making “women’s pictures,” called the maestro of the Hollywood soap opera in the 1950’s, the stronger, more fully realized characters in Sirk’s films happen to be the women, while the men, like Hudson, are portrayed as sex objects, usually seen as unimaginative, reserved, stiff cardboard cut-outs who become the objects of women’s desire.  This film made Rock Hudson a star, with movie magazines citing Hudson as the most popular actor of the year, receiving 3000 fan letters a week.

Hudson plays Bob Merrick, a despicable millionaire playboy who’s something of a thrill seeker that gets in a high-speed boating accident in the first few minutes of the film, only to survive, somewhat ungraciously, as it comes at the expense of one the community’s most beloved citizens, Dr. Phillips, who practices at the local hospital.  Emergency resuscitation equipment was not available for Dr. Phillips, as it was being used to save the life of Merrick.  Completely by accident, Merrick runs into Helen, the surviving widow (Jane Wyman), and learns that he’s responsible for her husband’s death.  While attempting to make it up to her, she contemptuously refuses his cash offer, and when he persists, like a mad stalker on the loose, she’s accidentally run over by a car trying to get away from him, leaving her in a permanent state of blindness.  There’s a wild development where Merrick meets the blind Mrs. Phillips on the beach at her home, but pretends to be someone else, where the near surrealistic shots of family bliss are shocking, to say the least.   In perhaps the wackiest narrative development, Otto Kruger plays Edward Randolph, a friend of Dr. Phillips who attributes his success as a painter to a mysterious spiritual theory about selflessly helping others in need without ever taking any personal credit for it, the so-called “magnificent obsession,” a kind of screwy, nonsensical saintly philosophy (“a source of infinite power”) that soon becomes the dominating theme of the movie, as it is just the ticket for Merrick’s complete transformation into the ultimate do-gooder, whose amazing journey from a super rich wacko sleazebag to the ultimate Mr. Clean, gentlemanly nice guy, model citizen of the year is nothing less than astounding.  Who says any of this needs to make sense?  It’s so over the top that it borders on being amusing, at times crossing into that hysterical territory, as even Sirk himself described this material as “trashy stuff.”  But it’s what he does with it that’s so miraculous, not the storyline, as in doing so, he has invented an idealized melodramatic film style that in its exaggerated artifice will forever be known as Sirkian.