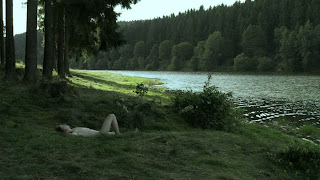 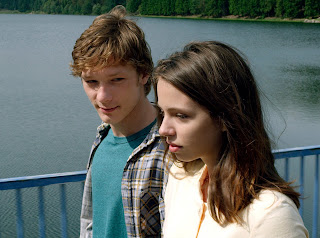 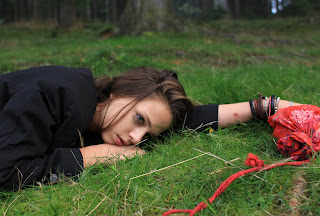 The Dreileben Trilogy is the product of director Christoph Hochhäusler, who was looking for something to write in his film magazine Revolver on the 40th anniversary of the German Film and Television Academy, initiating a public correspondence on film aesthetics and the lack of genre films in Germany with two other filmmakers from the Berlin school, Christian Petzold and Dominik Graf, deciding the only remnants they could find of the genre school was to be found on television.  So they decided to jointly participate in a project for German television, not a mammoth omnibus project like GERMANY IN AUGUST (1978), which featured a critical analysis of the German political landscape of the 1970’s as seen from 11 different directors, but instead combining three individual stories, each about 90-minutes in length, revolving around an escaped mental patient who is also a murderer and sex offender, all set in the small town of Dreileben (meaning three lives), using various genre styles to heighten the suspense, offering a unique perspective on a world where people’s lives may overlap and intersect, and where old feelings buried in the past may have a profound influence on the present.  Christian Petzold may be the most familiar of the group, where Yella (2007) and Jerichow (2008) are both widely acclaimed, each a standout in cleverly creating multiple layers of suspense, including the added twist of interchangeable psychological worlds, where Yella offers a dreamlike Antonioni reverie replacing the meticulous minutiae of drab or ordinary reality, using offscreen sound and a clever editing scheme to continually tease the audience with completely indistinguishable states of mind, while Jerichow is a surgically precise psychological thriller, both notable for the accumulation of small, banal details and characters nearly paralyzed by unseen or imaginary forces.

Shot on 35 mm, the opening slow-paced and character driven segment beautifully lures us this into this remote locale, almost perfectly integrating the psychological state of mind of a disturbing incident in town with the nearby woods, which is an enchantingly beautiful green forest, offering a pristine walkway to and from town that characters continually use, where each successive trip into the darkened interior touches on a mounting state of dread, as one continually wonders what may be lurking nearby, where the director offers offscreen sounds and a camera vantage point that apparently offers the sightline of the escaped convict, turning this into a Hansel and Gretel story of two young lovers that get lost in the woods.  Jacob Matschenz is Johannes, a somewhat inattentive orderly at the local hospital, supposedly studying to become a doctor, who may have inadvertantly left open a door allowing the escape of a demented murderer and sex offender, where the continual police presence throughout of sirens wailing, helicopters combing the vicinity, and officers on the street confirm he’s still on the loose.  Nonetheless, Johannes pays little attention to this escalating crisis developing right outside his window at a nurse hostel, offering him a superb view of the enveloping forest nearby.  Instead, he daydreams about the hospital director’s daughter, Sara (Vijessna Ferkic), while becoming infatuated with another young girl, Ana, Luna Mijovic, recently seen in Breathing (Atmen), that he voyeuristically sees having oral sex with the leader of a biker gang at a nearby lake where Johannes has gone innocently enough for a naked swim, carefully concealing himself while she’s left behind after a demeaning and humiliating experience when the biker shows the rest of the gang a video of them having sex, where she angrily tosses his iphone into the lake.  After initially rejecting his offer of help, she’s subjected to a brief attack by the escaped patient in the woods before Johannes intervenes, becoming inseparable afterwards, as if fate had brought them together.

The two spend the rest of the film in the throes of love, where they spend nearly every waking moment together, often seen in bed or playfully hanging out in his room, where Ana can continually be seen walking back and forth through the woods on her way into town where she works as a housekeeper in the local hotel.  This pattern of continually tempting fate is the underlying suspense of the film, accentuated by hyper-expressive chords of pulsating musical hysteria, as the two routinely ignore the ominous presence of an unseen danger lurking nearby, instead lost in their own little world where nothing else matters.  Occasionally brief flare ups occur between the young lovers, where quick tempers and adolescent naiveté seem to account for their momentary blind spots, both exhibiting short attention spans.  Accordingly, Johannes can occasionally be seen falling asleep at work while charged with watching the security video monitors, showing yet another voyeuristic side to his personality, often becoming obsessed with what he sees on the monitor, where Ana may be waiting outside for him.  Initially, he was excited by her presence, running off to see her, but over time her presence becomes an unanticipated added weight.  But it’s at an upscale party at a local resort where the relationship is truly tested, where this on-again, off-again mating ritual inexplicably takes on a hideous dimension, where the motives of both Johannes and Ana undergo a thorough transformation, where their previously inseparable paths diverge into uncommon territory, like split personalities, both becoming unrecognizable to the audience, mysteriously spiralling out of control in a dreamlike finale, leaving the audience emotionally adrift in a suspended state of paralysis.  Petzold may spend an inordinate amount of time in his films establishing a meticulous rhythm of ordinary detail, but he also has a way of shifting our attention on a dime into a netherworld where it’s near impossible to distinguish between what’s real and what’s not.
Posted by Robert Kennedy at 1:47 PM