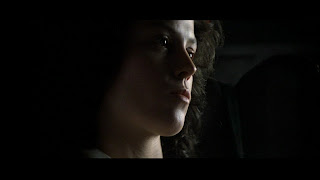 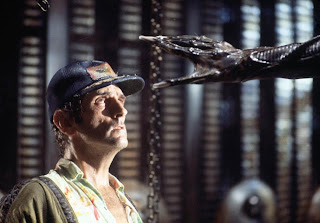 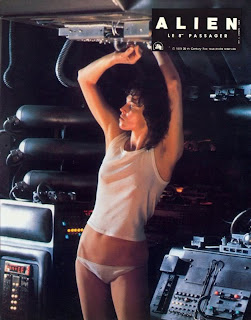 ALIEN             A
USA  Great Britain  (116 mi)  1979  ‘Scope  d:  Ridley Scott       Alien Trailer
In space, no one can hear you scream
Ridley Scott’s warm-up for his real masterpiece, BLADE RUNNER (1982), that would come several years later, including similar uses of robots or replicants as well as the infamous rain sequences.  Each deal with the idea of technology run wild, while ALIEN has an extremely subversive view of corporate corruption and deceit, particularly the idea of lying to employees in order to protect top secret military aims, where the lives of employees in outer space are literally owned by the corporation, requiring each to sign a contract to that effect, alleviating the company of all liability in the event something disastrous occurs.  Therein lies the cold-hearted, underlying premise to this story, where reality isn’t what you think it is, as it’s disguised under the lies of an alternative space mission, where only the top officers are aware of the circumstances, so some of the shudders in this film is the degree to which corporate greed is emphasized—very much ahead of its time in that respect.  With several nods to Kubrick’s 2001 (1968), certainly at the center of this premise is a ship computer, known as mother, that no one has access to except the top officers.  The rest are excluded from the chain of command and thereby shielded from the truth of their real mission.  This story concerns an outer space cargo ship that is returning home from a mining expedition, where its passengers are in a scientifically imposed deep sleep, but woken up 10 months before their anticipated arrival time to answer a distress signal on an isolated asteroid where they encounter an alien life form that horrifically makes its way inside their space vessel, eventually picking off the crew one by one.  The pervasive sense of dread turns this into a haunted house story with a monster on the loose, as in no time this crew is lost in the woods with no way out.

Adapted from a Dan O’Bannon story, who previously wrote the story and screenplay for John Carpenter’s DARK STAR (1974), assisted by Ronald Shusett, with amazing visual effects from H.R. Giger (surrealist alien creator), Carlo Rambaldi (alien head design), Brian Johnson and Nick Allder (special effects), and Denys Ayling (miniature photography), with an extremely elaborate and intricately created set design by Michael Seymour (production design), Leslie Dilley and Roger Christian (art), and Ian Whittaker (set).  From the outset, the camera is the only stirring creature as it slowly moves around corners and gazes at the dark cavernous design of the space ship interior, taking on the attributes of inquisitiveness and curiosity.  When the humans awake to discover their situation, all done by computer (perhaps the most archaic presence in the entire film), there’s an interesting use of improvisation in their conversation, using the Altman style of overlapping dialogue which creates a sense of authenticity in the moment, where soon each of the characters begins to take shape in the eyes of the audience.  The corporate hierarchy (and great cast) is immediately established, where the chief mechanics, the two guys that fix things and make the ship go are on the lowest pay grade (Yaphet Kotto and Harry Dean Stanton as Parker and Brett), while Sigourney Weaver and Veronica Cartwright are Ripley and Lambert, the middle management officers under John Hurt (Kane), commanded by chief science officer Ian Holm (Ash), and ship commander Tom Skerritt (Dallas).  For openers, the engineers complain they’re not getting equal shares of the bonus pay for the work they’re doing, while in no time, Ash reminds them of a hidden clause in their contract that if they fail to carry out their mission, as assigned, they will forfeit all wages.  So immediately they are put in their place by the ship foremen, where life in outer space resembles the same working conditions on earth of an overworked and underpaid work force.  But that similarity ends as soon as they explore the asteroid, where with shuddering efficiency, there is a stunning violation of standard protocol as they allow the alien to enter their ship.
What immediately becomes noticeable is the lazy nonchalance in the way this is handled, and the lack of precaution used.  Anyone with a pet dog or cat, or even a bird, knows the care one uses to keep them from escaping out of the house—by closing the windows and doors behind you.  This crew routinely leaves doors open allowing the alien free access to their entire ship.  And despite the obvious danger to all, when they have it in their possession, no one is assigned to watch it.  So they display a rather casual display of ignorance in their approach to this alien intrusion, all of which takes on even greater significance when the alien grows to monstrous size and slowly starts attacking the crew.  The monster itself, whose appearance is delayed and only gradually seen until the end, is a marvel of grotesque proportion, yet what we remember is the gooey slime it leaves behind and the continually drooling giant teeth, where it stealthily moves mysteriously overhead through the ventilation ducts.  Despite the passage of thirty years, the film still holds up because Scott does an exquisite job conveying a creepy sense of panic and fear and things that go bump in the night, even while most of the horrific violence takes place offscreen, where the body count, quicker edits and dark claustrophobic interior adds to an increasingly developing paranoia on the ship.  The pulsating strobe lights and emergency siren sound loop become almost unbearable as the film races to its spectacular heavy breathing finale, which is an interesting mixture of frantic desperation, matching Weaver’s sensuous vulnerability and cool head against a ghastly beast that obviously uses and consumes humans at will.  In the director’s cut, the added scenes are a nasty confrontation between Lambert and Ripley outside the infirmary, a brief shot of the alien hanging like one of the chains hanging from the ceiling above Brett in the interior rain (from condensation) as he’s looking for the cat, Parker gets Brett’s blood splattered on him as Brett is carried off, and the infamous ‘cocooning’ sequence where humans become stored fuel for the monster.  Along with his next film BLADE RUNNER, Scott has created two of the best sci-fi films ever made and could never have made that film without the meticulous precision shown here working with such extraordinary special effects, creating one of the great monster movies ever, certainly better than all the follow ups which resemble the CGI assault to the senses shown today, a blitzkrieg of explosions and mayhem which the audience substitutes for excitement.  The thrill of ALIEN is largely due to the deliberate pacing and stunning futuristic visual innovation of the time which precedes the CGI revolution in cinema, where the director himself had to know how, from the wordless opening restraint, he could use the audience’s natural fear of the unknown along with a pervading sense of gloom to help build the mounting tension to a peak of madness and hysteria, all the while embracing the fundamental essence of what it is to be human.
Posted by Robert Kennedy at 9:24 AM