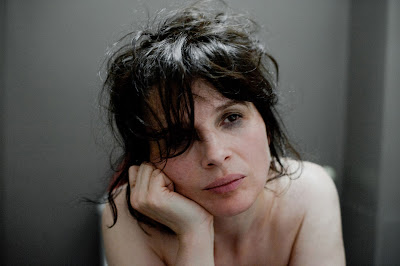 In something of a twist, and a comment on how far we’ve come from the Feminist Movement of the 60’s that called women’s sex scenes in magazines or in the movies exploitive, the primary filmmakers today that are shooting soft-core sex scenes are feminist women, such as Julia Leigh’s Australian Sleeping Beauty (2011) or Hagar Ben-Asher’s Israeli The Slut (Hanotenet) (2011), and now Polish filmmaker Malgoska Szumowska co-writes what feels like the quintessential French film, especially as seen through the emptiness of the middle class in yet another film that exploits female nudity while offering a social comment on the status of women in society.  Juliette Binoche, no less, plays Anne, an intelligent and independent woman who leads a typically bourgeois lifestyle, wealthy and materialistic, but unhappily married with two spoiled children, leading an empty existence in an enormously vacuous Parisian apartment.  As a reporter for Elle magazine, the film is split between her troubled home life, which requires plenty of time-consuming organization and hands on care, and her interviews with two college students that pay for their studies as high priced call girls, Charlotte, Anaïs Demoustier from Belle Épine (2011), a French girl, and Alicja, Joanna Kulig, so good in Pawlikowski’s The Woman in the Fifth (2011), a party girl, Polish student, whose graphic sexual exploits are revealed as part of the interviews.  Initially, Anne takes the typically feminist view asking if the women feel exploited or degraded, and is surprised to find neither one feels morally conflicted in any way.  Both seem most pleased at their financial independence, where they are set up in small but luxurious apartments themselves, where the initial surprise is how much money they can make with relatively little effort in terms of working hours.  Anne, on the other hand, leads a busily harried life trying to look after her overly selfish sons, a distant husband, and a rapidly approaching work deadline, where she’s the one that feels exploited and degraded.  Anne tries to get to the bottom of the women’s supposed sense of empowerment, but gets nowhere with either one of these women.

In fact, this moral ambivalence seems to be at the center of the film, as despite the seemingly frank answers of the women, they provide few clues that can explain their behavior, though it suggests women have more choices in the workplace and can lead highly successful professional careers, but it doesn’t change how women are viewed in society, a perception that remains exclusively male dominated.  Despite the assignment, Anne seems to be exploring her own sense of fulfillment, or lack thereof, through these young girls who have their lives ahead of them.  While men immediately label the women prostitutes or whores, which carries with it negative stereotypes, power trips, and even open hostility, Anne sees them for who they are, two young girls who have no more of a clue how to achieve happiness than anyone else.  Without judging them, she spends most of the interview time simply sharing feelings and experiences, where she develops a closeness and even an affection to both girls without ever crossing the line of professionalism.  Still, even from the audience’s standpoint, there is definitely moral ambiguity about what they do, as even with a positive spin, not every experience is without its personal horrors.  As these women don’t work for an agency, there is no one to protect them should clients get ugly or violent.  The subject of condoms never comes up, except humorously, where the film never really explores this territory, but it does veer from the pleasant, somewhat idyllic picture described by the two girls, casting doubt on their understanding of the profession, as there are most certainly risks involved, just as there are sacrifices and emotional suffering in any marriage, where in the long run, one must weigh the costs.  Stripping and/or prostitution are usually seen as short term investments, while marriage is certainly designed to last forever.  The director beautifully intercuts the sexual acts of the women with Anne’s work at home, looking after her kids, doing laundry, spending time in the kitchen preparing meals, where the picture of work in both cases is depicted as a tedious routine and hardly synonymous with personal pride.

The women seem to be on a shared wavelength, but not the men, who are completely outside this sphere of rationale except as necessary irritants and sources of money.  Neither woman feels sexually degraded performing unusual requests, as they are asked to do, as they’re being paid extravagant sums.  The weirdness aspect, as far as they’re concerned, is the sexual hang-ups of the men who seem to need strange, kinky outlets for sexual gratification.  While remaining somewhat muddled, the suggestion is that Anne is part of an older generation with moral hang ups, as she sacrificed her own sexual satisfaction long ago for the good of a family, and along with it a certain spontaneity and cheerful nature, leaving behind an embittered person who goes through the routines but feels cheated by the failure of her own marriage, leaving an interminable silence where joy once reigned.  Getting somewhat short shrift here is Anne’s husband (Louis-Do de Lencquesaing), who apparently means well, for the most part, but is too busy at work and has little emotional connection to his wife, and too often plays the blame game, where as far as he’s concerned she’s some kind of embarrassing feminist firebrand.  Unfortunately, a large part of the story involves his boss and friends coming to dinner, where Anne is expected to cook dinner and make a favorable impression, which from her perspective is just an extra amount of unneeded pressure, which she attempts to handle gracefully, but when the guests are such nauseatingly pretentious, self-centered bores, people who are just too full of themselves, it’s hard to pay them any mind and not feel used and disgusted.  Instead, in something of a Michael Haneke final long shot, reminiscent of CACHÉ (2005), where the observant clues are everpresent, the family civility is there the next morning for breakfast, but not an ounce of life or joy can be seen, as it’s all suppressed into a tired morning ritual that feels like a recurring nightmare that will play out again and again like the myth of Sisyphus, where everyone feels stuck and manipulated into their various corners where its simply easier to accept defeat in resigned silence.  The dreary and somewhat aloof tone of the film is hardly engaging theatrically and may turn off many viewers as insufficiently shallow, never offering any level of dramatic tension or suspense, and only really works on an intellectual level, as this is really a film built upon images and ideas, shots and counter shots, given a classical music score, constantly questioning the reality of the image.  Of note, the scene where Anne visits an older man in a hospital is Binoche’s real life father.
Posted by Robert Kennedy at 9:05 AM