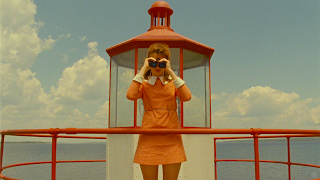 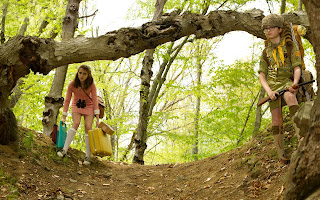 A candidate for the most delightful and thoroughly enjoyable film of the year, much of which feels autobiographical and is curiously fascinating from the opening few shots, showing a doll’s house view of a comfortable old home (a converted lighthouse), with various inhabitants seemingly occupying each individual room, with kids keeping separate from the parents, Bill Murray and Frances McDormand, who are themselves seen in separate rooms, the camera quickly moving from room to room in an inquisitive fashion, where one can only marvel at the meticulous detail.  Each shot is perfectly composed and color coordinated, which continues throughout the entire picture, shot on 16 mm by cinematographer Robert D. Yeoman in what is surely one of the most gorgeously composed films seen in awhile.  In addition, what is immediately noticeable is how perfectly edited each shot is, all in tempo with the music, which is the narrator’s version of Leonard Bernstein playing Benjamin Britten’s “The Young Person’s Guide to the Orchestra” Moonrise Kingdom Soundtrack 01. The Young Person's Guide To .. YouTube (3:24).  This highly structured musical piece provides a leitmotif for the film, continually interjecting itself throughout, adding variations on a theme, which becomes the working narrative for the film, a simple children’s story accompanied by changing variations in music.  Set in 1965, supposedly simpler times, on the fictional New Penzance Island off the coast of New England, with blown up maps provided for the audience’s assistance, Anderson has really outdone himself here in providing such a layered texture, as his two 12-year old leads, escaped Khaki Scout Sam Shakusky (Jared Gilman) and local girl Suzy Bishop (Kara Hayward) run away together, becoming a child’s version of BADLANDS (1973) constantly seen and experienced through the eyes of the kids, featuring outlaw children on the run from their parents, a Scout Master, and the law.  The moral reverberations resound through the ears of the highly impressionable and active imaginations of other kids, most all of whom think Sam is so different he must be mentally deranged.


Accordingly, Sam leaves a note for his Scout Master (Edward Norton, wonderfully buttoned-down and straight-laced) resigning from the Khaki Scouts, claiming none of the other scouts liked him much anyway, placing a poster over the hole in his tent where he escapes, in an obvious nod to THE SHAWSHANK REDEMPTION (1994).  His escape is all part of an elaborate plan that has been carefully choreographed with Suzy ahead of time, mostly by correspondence through the U.S. Mail agreeing to meet at a designated spot and then hike into secret oblivion, hoping no one will ever find them.  What’s apparent is that both kids are viewed as troublesome because they’re the smartest kids around, immune to typical conformity measures used by authority figures to make kids act alike, making them both outcasts where they’re easily drawn to one another.  The two are a marvel of casting, as they’re probably smarter than the adults around them as well, making them undeniably appealing characters for their beguiling ingenuity, where Sam shows a surprising outdoorsman scouting aptitude for taking care of Suzy in the wild.  Interestingly, they meet backstage at the town church during a performance of Benjamin Britten’s Noye's Fludde, Moonrise Kingdom Soundtrack 18. Noye's Fludde, Op.59 - Noye, take thy wife anone YouTube (2:13) which includes a children's chorus of colorfully costumed animals and birds, where Sam is immediately drawn to Suzy’s bird outfit, that and the fact she isn’t smiling gleefully like the others.  Actually all the children in the film exhibit plenty of individual flair and personality, adding a bit of theatrical showmanship and are in perfect synch with Anderson’s idealized child fable, made even more clever by Suzy’s habits of reading her favorite books at night out loud for Sam, amusingly putting him to sleep initially, but later sustaining his interest completely, where the stories within the story are always wonderfully inventive and near revelatory.  Elfish narrator Bob Balaban shows up intermittently in unexpected places, always absurdly dressed, reinforcing the element of a magical realism and whimsy.
Adding a level of seriousness (and complete lack of sentimentality) is Sam’s back story where he’s an orphan, having lost his parents early on and grown up in an orphanage, pictured in flashbacks from the 50’s as all boys with wild hair in jeans and white tee-shirts standing around working on cars while Sam remains in his bed reading, the subject of constant humiliation and torment.  When the local police (Bruce Willis) contact his parents to report him missing, they don’t want him back, finding him too much trouble, thinking he’s a bad influence on their other children, whereupon social services is contacted, Tilda Swinton in her matching blue uniform and cap, exhibiting the pious and rigid attitude of the highly repressed, Christian women who founded the social work movement providing charity while administering the church's mission to the poor.  Listening to her, Sam’s chances for the future are doomed, as adding charges of a runaway to his record will only mandate intense psychological testing, perhaps even electric shock therapy.  While this may sound outrageous, and hearing it from the emotionally severe Swinton it most certainly is, what reverberates throughout the minds of all the kids is what an utterly barbaric experience that must be, and while none of them particularly like Sam much, they don’t hate him enough to wish that upon him.

So this turns into an utterly enchanting children’s story about wild adventures in the woods, featuring the obligatory love song (in French, of course) Françoise Hardy - Le Temps de l'Amour - YouTube (2:26), and the dysfunctional and often irrelevant parents searching for them, lavishly decorated in Britten’s Shakespearean Midsummer Night’s Dream subtext, Moonrise Kingdom Soundtrack 09. A Midsummer Night's Dream ... YouTube (3:05), thoroughly enhanced by the use of children’s songs and a children’s chorus, cleverly intermixed with a little playful Hank Williams, which beautifully accentuates the children’s fairy tale aspect of the film, heard here by Alexandre Desplat’s “A Veiled Mist” Moonrise Kingdom Soundtrack 06. The Heroic Weather-Conditions ... YouTube (3:18).  Life on this quiet island is not like anyplace else and couldn’t be more intimate, becoming a journey of isolated adolescence and first love teen romance given a strangely magisterial beauty all its own, where Anderson’s intoxicating artistry works its own magic.  Because the ages of the kids are so young, this film is unlike anything else in Anderson’s career, where the usual mocking, smart-assed tone is transcended by tenderness and the actual intelligence and compelling wit of the lead characters, where their chemistry is a refreshing portrait of understatement, suggesting the world must find a place for kids who are different, who due to no fault of their own just happen to be smarter (and perhaps geekier) than other kids and adults around them, where Anderson’s emotional deadpan and comic caricature finally have a purposeful release, becoming a wonderfully inventive children’s theater
Posted by Robert Kennedy at 10:08 AM