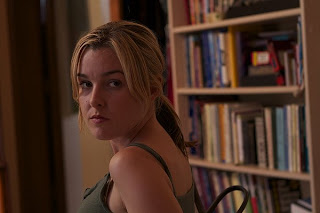 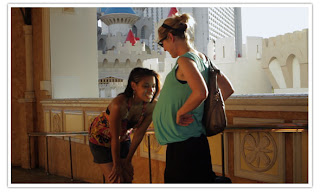 SMALL, BEAUTIFULLY MOVING PARTS             B-
USA  (73 mi)  2011 d:  Annie J. Howell and Lisa Robinson       Official site
This is a modest feature and a somewhat unorthodox film, spawned as a pregnancy fantasia expressed in the form of a road movie, where having a baby is partly looking backwards at family recollections and photos, and also a journey ahead into the unknown.  Sarah Sparks (Anna Margaret Hollyman) is a fairly level-headed young woman with a fondness for electronic gadgets and fixing things, where she expresses elation (“Well hello there!”) at the idea of seeing the electrical circuitry inside an old broken down radio picked up for fifty cents.  But when a simple pregnancy stick records that she’s pregnant, she’s instantly befuddled and seems to lose all sense of coherency, suddenly becoming a klutz in every respect.  While her partner Leon (Andre Holland) is totally supportive, both literally jazz-riffing with joy off the ultra sound baby movements, he’s not the part of the puzzle that needs to be put together, instead it’s a missing piece of her life, as her mother abandoned her and her sister without explanation some time ago and has simply disappeared from her life.  Not knowing what to expect, she insists on paying her mother an unexpected visit, which will be part of a combined West Coast Los Angeles visit to see her father and sister.  While her father is completely engrossed with exploring online relationships, he barely has a moment for her except to use her computer repair expertise to fix sudden inexplicable Skype blackouts and intermittent sound loss, where once everything’s back in order, he’s never off the computer.
Sarah’s visit to her sister is a little more involving, as she’s already a mother, though admittedly a poor excuse for one as evidenced by her insistence that her daughter be potty trained in a day, and is part of a community of mothers with kids that are used to getting together and providing collective child care.  Sarah is called upon to fix their laptop computer as well, suffering an unexpected child “accident.”  The tone of the film reaches darkly comic proportions when her sister throws the inevitable baby shower from Hell, where Sarah is literally attacked by a small army of loudly misbehaving children who don’t pay the least bit of attention to their cluelessly inept mothers, which leaves her shell-shocked and a bit traumatized, right alongside the news from her father that her mother doesn’t care to see her, claiming “I Fed-Exed her a postcard and she faxed back.”  Sarah makes a vain attempt to write her an actual letter, but finds this too painstakingly old school and decides to drive into the middle of nowhere in the desert regions of Arizona instead, where word is her mother has “fallen off the grid.”  Maintaining constant phone contact with Leon, who willingly suggests he join her, Sarah insists this is something she needs to do on her own, becoming a metaphor for her physiological pregnancy, which comes complete with side effects, like altered mood swings, unexpected tearfulness, and strange food cravings.  Sarah actually breaks out into a smile when the GPS equipment (actually the voice of the director) in her rented car starts calling her by her name.
But when electronic things inevitably start breaking down, Leon urges her to visit his sister in Las Vegas, the last place anyone would seemingly seek comfort during a pregnancy.  Nonetheless, Towie (Susan Kelechi Watson) has magical hands in touch with the spiritual world and finds a strangely alluring invisible parallel creature, a lizard with a light bulb for a head, living just outside her skin, giving her a drawing to take with her on her journey.  After a lengthy drive through the Grand Canyon, to the exact same site of an old photograph of her as a baby in her mother’s arms, where Sarah gets downright dour with a traveling family (the director again) that just wants their picture taken, she loses all traces of electronic communication in an apparent dead zone, where somewhere out there among the cactus trees in the dirt roads of the desert are traces of her missing mother.  What she discovers is somewhat eccentric, but very West Coast, as people take their cult worshipping very seriously, where like her father, they are totally engrossed in silent meditating, without an ounce of free time to spare for anybody else.  What seems brazenly selfish is exactly that, yet spun in some mysterious hodgepodge of philosophical selflessness, to be at one with the universe, but lost, apparently to the world around you and everyone in it.  The film is a depository for missed and failed communication, which is certainly a stand-in for all the fears and doubts that suddenly take center stage during pregnancy, especially the closer one comes to full term.  Hollyman, herself, beautifully understates the role with tiny bits of humor throughout, where perhaps the ultimate irony is the circuitry she’s finally called upon to fix is none other than her own, where the title beautifully expresses that slowly developing life form growing inside.  Filled with vague and ambivalent feelings throughout, always expressed through small details, never with a big picture approach, this is as loving and gentle an offbeat portrait of pregnancy and having a baby as you’re going to find.
Posted by Robert Kennedy at 10:07 AM