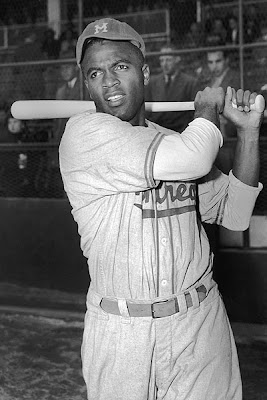 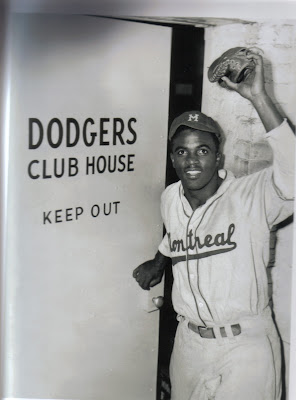 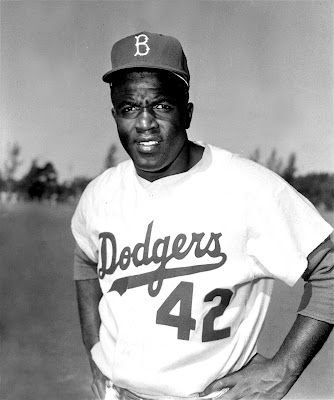 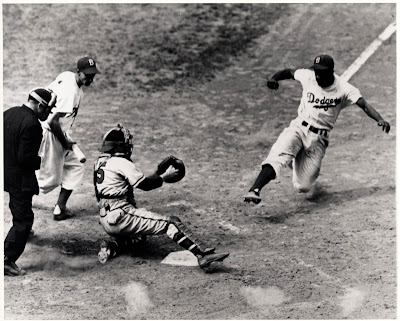 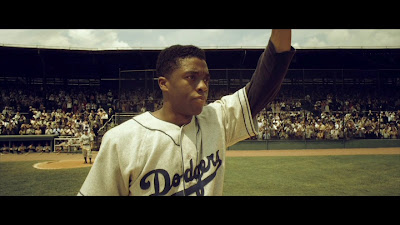 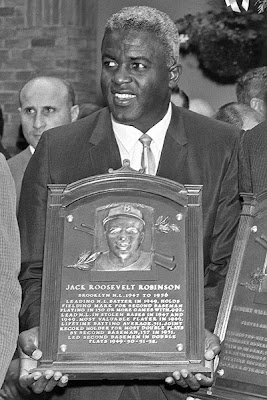 He (Jackie Robinson) knew that the future of blacks in baseball depended on it. The pressure was enormous, overwhelming, and unbearable at times. I don't know how he held up. I know I never could have.  —Duke Snider, Dodger teammate in the Hall of Fame

The Jackie Robinson story is a film black director Spike Lee has been wanting to make literally for decades, but never received funding for the project, so it will likely never get made.  Instead the film gets the exaggerated Hollywood treatment, finally getting onboard with a young, white filmmaker writing and directing the story, a maker of three fairly ordinary action thrillers to his credit, including two Health Ledger ventures, A KNIGHT’S TALE (2001) and THE ORDER (2003), and nothing since, telling the story in the most narrow view possible, anointing Robinson to the sainted hero status, making him all too flawlessly perfect and larger than life, where if you listen to Harrison Ford’s Branch Rickey tell it, with Robinson following in the footsteps of Jesus and turning the other cheek, this historical event unfolds like a Biblical crusade.  Focusing on only three years, 1945 – 47, Robinson is seen making the transition as the only black player on otherwise all-white minor league teams to becoming the first black player in major league baseball, starting the season with the Brooklyn Dodgers in 1947, making an impact hitting .297 and winning Rookie of the Year honors while leading his team to a pennant.  End of film.

Of interest to viewers, though left out of the film, the Dodgers didn’t win the World Series until 1955, the worst year of Robinson’s career as his skills had diminished considerably at age 37, playing one more year before being diagnosed with diabetes and retiring from baseball, where the Dodgers left Brooklyn and moved to Los Angeles before the 1958 season.  Perhaps the biggest disgrace is Robinson’s inability to obtain employment with the Dodger organization after his career, where they were too busy redefining themselves in the leisurely image of Southern California.  Even after being elected into Baseball’s Hall of Fame, Robinson reached out with a letter to Walter O'Malley, the owner of the Dodgers, attempting to bridge the supposed communication gap, but nobody anywhere in baseball, including General Manager Branch Rickey (who was in Pittsburgh at the time), offered him a job, despite the mythical hero status that the game of baseball supposedly pays him today, making an exception for Robinson alone when they retired his number 42 from baseball on the 60th anniversary of his major league debut, celebrating the first Jackie Robinson day on April 15, 2007, twenty-five years after he died.  What this film doesn’t tell is the untold story of how much of a tortuous psychological beating Robinson endured and how it effected him for the rest of his life, literally killing him prematurely at the age of 53.

Chadwick Boseman, the actor playing Robinson, is a Chicago playwright whose play Deep Azure was performed by the Congo Square Theatre Company in Chicago and was nominated for a 2006 Joseph Jefferson Award for Best New Work, while he also has an extensive television acting career.  While the film balances his baseball playing days with his steamy romance with his wife, Nicole Behaire from Shame (2011), it is also divided in half, where the first half documents his progression through the minor leagues and the second half shows his first year in the big leagues.  What’s clear early on, however, is the equally heroic depiction of Dodger General Manager Branch Rickey by Harrison Ford, giving it the aw shucks treatment, where his vision-defining nobility make him a co-equal star in the film.  Needless to say, Boseman and Ford are both excellent, Boseman in exuding that electrifying joy and affection for playing the game, and Ford for having the moral mettle to see through and stand up to all the racial guff leveled at his player, basically running interference for him, offering alternative black housing in an era of “white only,” or pep talks from time to time, resuscitating his dwindling spirits.  Ford plays him like a country preacher, as if he’s been to all the rural revival meetings and can quote scripture with ease, where his cause is driven as if by divine understanding, making it all the more evident that the white writer/director cannot imagine how it must have felt being slurred and scorned as relentlessly as Robinson was.

While Rickey maintained a deep Christian faith, he was first and foremost a baseball man who wanted to win and saw that Robinson’s talent added value to the team on the field and at the gate, bringing in additional black customers, where he saw a future for blacks in baseball.  Anyone who saw players in the Negro Leagues at the time would have come to the same conclusion, as so many were major league quality players, but Rickey was able to get them at bargain basement prices.  Other forces were in play to integrate the game of baseball, including a long drawn out crusade led by the leading black newspapers at the time, The Chicago Defender, Pittsburgh Courier, and Baltimore Afro-American who were also interested in integrating other American industries after the war, including the military, but Robinson was America's first taste of affirmative action, as he was a qualified black applicant denied the opportunity to advance in his chosen profession by an institutionally racist industry.  Later on at Pittsburgh, Rickey signed a contract with Roberto Clemente, the first Latino in baseball in 1955.  In this film, Rickey is Robinson’s closest confidante, the one who accurately predicted the death threats and racial hatred that Robinson would be forced to endure, while also foreseeing how easily Robinson could jeopardize the chances of other blacks coming after him if he ever responded to the taunts, as he would be blamed as the instigator, as was the racial superiority custom of the times.

The film fails to mention Robinson’s tryout (closed to the public, consisting of only management personnel) along with two other black players with the Boston Red Sox at Fenway Park in 1945, an event prompted by the persistence of several black journalists, which was mostly a humiliating travesty designed to placate baseball traditionalists, where the players were subjected to endless racial epithets and Robinson left the tryout angry and disappointed.  It wasn’t until 14-years later that the Red Sox were the last major league team to eventually integrate in the summer of 1959.  Also left out is the largely triumphant 1946 Triple A minor league season with the Montreal Royals, where in contrast to America, Canada embraced Robinson and two other black pitchers on the team, winning over the initial racial resistance of his southern Mississippi manager Clay Hopper on day one with his spectacular play in the field and by hitting .349 and stealing 40 bases in 124 games, laying the groundwork for 2 subsequent major league baseball franchises in Canada.  Like the jingoistic sentiment expressed in the Academy Award winning Argo (2012), both Hollywood films leave out significant Canadian influence.  Also inexplicably, the film leaves out other blacks that followed on the heels of Robinson in that same year, like Larry Doby playing for the Cleveland Indians just two months afterwards, both ending up in the Hall of Fame, or pitcher Dan Bankhead, baseball's first black pitcher, and the first black player to hit a home run in his first major league at bat, who happened to be Robinson's roommate with the Dodgers in 1947, as they were the first blacks to play in a World Series, eventually losing in 7 games to the New York Yankees.


Born into a family of sharecroppers, Robinson starred in 4 white-dominated sports in college at UCLA, baseball, basketball, football, and track, where he was the nation’s college Long Jump champion.  His older brother Mack won a silver medal at the 1936 Olympics in the 200 meter dash, only 0.4 seconds behind Jesse Owens.  Robinson was actually pursuing a football career as a running back until Pearl Harbor intervened.  So while there are gaping holes in the film, it is well acted and inspirational, providing important perspective about the historical relevance of Robinson's life and accomplishments.  But the threadbare script just doesn’t do Robinson justice, especially in establishing his legacy as a groundbreaker, as the American public grew to appreciate the unbridled enthusiasm that he brought to the game, where kids growing up on the 50’s and 60’s learned to appreciate racial diversity not through landmark legislative or Supreme Court decisions, but through everyday exposure to so many black and Latin baseball players who became not only their favorites, but among the greatest players of all time, like Roberto Clemente, Rod Carew, Juan Marichal, Frank Robinson, Bob Gibson, Willie Mays, or Hank Aaron.  Robinson’s stature transcends sports, as he almost single handedly dispelled the notion of black inferiority, where his Hall of Fame career subsequently spoke for itself, becoming a role model for courage and grace, both on the field and off as he opened doors, calling into question the senseless injustice of a segregated white and black America, becoming a good will ambassador for integration and equality, an advocate for Civil Rights, where his life serves as a personal and professional inspiration, posthumously awarded the Presidential Medal of Freedom and the Congressional Gold Medal.  He’s a man that helped blacks believe that things they could not imagine were now possible, where Robinson took the hateful insults, racial slurs, death threats and abuse and made it just a little bit easier for the next person of color to become the “first” or second in their school or workplace.
Posted by Robert Kennedy at 2:05 AM