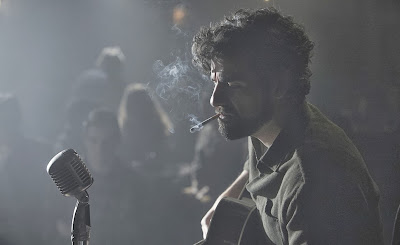 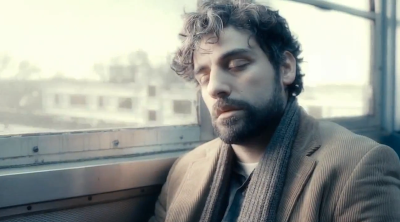 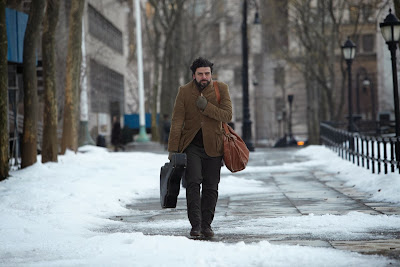 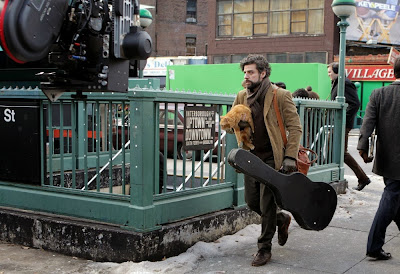 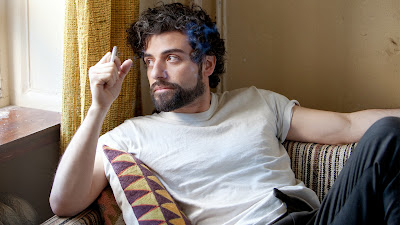 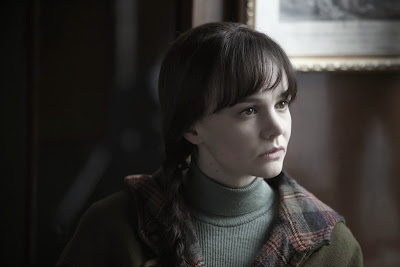 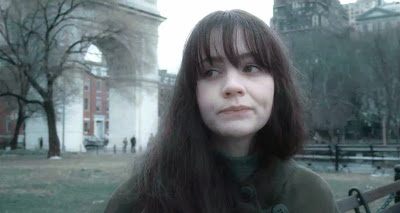 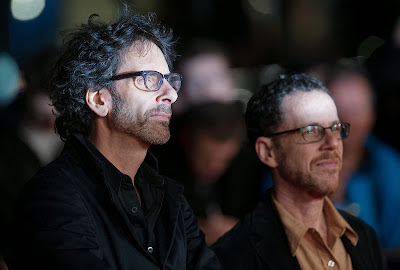 
An oddly melancholic film set in the early Greenwich Village folk music era of 1961, when musicians with guitars played at coffee shops and folk clubs, mostly singing traditional folk songs set to their own arrangements, where some are still overly clean cut, like holdovers from the 50’s, while others click with the audience, developing an instant rapport, while a few like Llewyn Davis (Oscar Isaac) hold their audiences pretty much in contempt, thinking they know squat about music, as they listen to such crappy musical groups that are all copying the songs and style of more successful groups.  While Llewyn is able to give heartfelt performances, where there are many songs sprinkled throughout the film that reek of soulful authenticity, he doesn’t have the overriding trust in himself or the needed ambition to get him over the hump.  Described by Ethan Coen as “An odyssey where the main character doesn’t go anywhere,” Llewyn is constantly in motion, but it feels like he’s moving in circles where he remains stuck in a state of suspended animation, constantly trying to get into somebody’s door, where a recurring motif is looking for a sofa to sleep on for the night.  With no place to call home, he’s constantly lugging his guitar around with him on the subway, hoping to catch a lucky break somewhere.  When we meet his agent Mel (Jerry Grayson, in his last role before he died earlier this year), we know immediately that this guy isn’t getting him anywhere, yet he sticks with him, perhaps only because Mel is perceived to be somebody “in the business.”  Perhaps it’s no accident that the Coen brothers grew up outside Minneapolis, Minnesota, about three hours from Hibbing, Minnesota where a young Bob Dylan grew up as Robert Zimmerman.  Both moved to New York City to eventual fame and fortune, but this film imagines someone who wasn’t so fortunate.  The question the movie asks is if the 60’s era conservatism is all that interesting, as it’s been completely overshadowed by the late decade’s more violent Vietnam anti-war protest movements that ushered in a new focus on Civil Rights, Global Ecology, and the Women’s movements.  This film takes place before Roger Maris hit 61 home runs, during the idealism of a new era from newly elected President Kennedy, the first Catholic to win the White House, with a youthful vigor and fashionable wife that swept the nation, whose era of Camelot was considered a visionary time filled with a promise for the future.


While this has a familiar ring with David Chase’s Not Fade Away (2012), teenage kids from Jersey forming a rock ‘n’ roll band in the late 60’s playing covers of songs admired by the Rolling Stones, where they were confident they would hit it big, but never did, much to their personal dismay.  Dylan describes the difference between rock ‘n’ roll and folk music in a Cameron Crowe interview contained in the liner notes to the 1985 multi-album Biograph:


The thing about rock ‘n’ roll is that for me anyway it wasn’t enough ... There were great catch-phrases and driving pulse rhythms ... but the songs weren’t serious or didn’t reflect life in a realistic way.  I knew that when I got into folk music, it was more of a serious type of thing.  The songs are filled with more despair, more sadness, more triumph, more faith in the supernatural, much deeper feelings.


There is no question that from the opening number in the Gaslight Café, “Hang Me, Oh Hang Me,” (Daniel Rossen version) Daniel Rossen - Hang Me, Oh Hang Me (Dave Van Ronk cover) YouTube (3:22), Llewyn is a very talented young man, more authentic and not so much a copycat as the other groups seen, but as we soon learn, he has major character flaws that alienate him from just about everybody.  Opening and closing at the same point, the film is a brief flashback in time representing the travails of a few harrowing days in the life of folksinger Llewyn Davis.  While the film is a time capsule of the era, where the Coens love to make authentic period pieces, what’s missing performance-wise are the Beat poets that often introduce the music in the early 60’s, and the beginnings of free form jazz from musicians like Ornette Coleman, John Coltrane and Eric Dolphy, often playing in the nearby Village Vanguard.  But it is Dave Van Ronk's 2005 memoir Mayor of MacDougal Street that inspired the Coen Brothers' latest film, as he performed in GreenwichVillage for five decades beginning in the 50’s, where three of his songs are heard, and the title comes from Van Ronk’s 1963 album Inside Dave Van Ronk.  Other autobiographical Van Ronk tidbits making their way into the film are spending time in the Merchant Marines (as did Jack Kerouac), taking a trip to Chicago to unsuccessfully audition for owner/manager Albert Grossman at the Gate of Horn, refusing to join a Peter, Paul, and Mary-style folk trio, and complaining to his record company that he was so broke he couldn’t afford a winter coat.  But Van Ronk was more of an established musician, where according to Elijah Wald, who co-wrote the memoirs, “People slept on his couch — he didn't sleep on theirs. And the reason Dave became who he was in the Village was the way he welcomed anyone who cared about the music.  Llewyn is clearly not that guy.”


While authenticity is paramount, the Coens love to get the details right, including the placement of Van Ronk’s collection of primitive art from New Guinea and the Pacific Northwest into the homes of some of Llewyn’s wealthier academic friends.  Especially significant is the film’s setting in the dead of winter, somewhat reminiscent of the 1963 cover of The Freewheelin’ Bob Dylan, where Dylan’s presence lurks in the shadows, as he transformed the folk scene’s focus from traditional songs to original compositions, leaving performers like Llewyn out in the cold.  What was more interesting to the Coens was the period that came just before this happened, where there were so many more that *didn’t* make it in the music business.  The film is an unsparing look at one such performer who, unlike many of his contemporaries, can’t overcome his character flaws and remake himself in the image of someone else.  Instead he’s stuck with who he is, a somewhat gloomy guy with a flair for bad taste that eventually ticks off everyone he meets.  Often beleaguered at his status at the bottom of the food chain, where despite his talent, he has nothing to show for it, where he’s forced to live a hand-to-mouth existence, yet he feels he deserves better.  To his credit, his sincerity is something he wears proudly on his lapel, but he chooses to lead a miserable life, continually forcing others to contend with his misfortune.  The problem with the film is Llewyn is a particularly loathsome character, where there’s little emotional connection to what happens to him.  He fails to establish even basic level relationships with friends and family, leaving him a loner, unable to pull himself out of his predicament.  Onscreen throughout the entire picture, it’s one of the more extensive character developments in any recent Coen brothers movie.  It’s only when he takes a road trip to Chicago that we learn a portion of his past that continues to haunt him, that leaves him feeling like damaged goods, where he can’t help but repeat the same mistakes from the past, which only further isolates him.


That surreal road trip, something of a hilarious satire of Kerouac’s On the Road, where Chicago has never been used to gloomier effect, includes two of the best secondary characters in the film, John Goodman, terrific as always, playing a highbrow jazz aficionado who sarcastically thinks of folk musicians as social misfits that can’t do anything else, while his driver is Garrett Hedlund as Johnny Five, completely silent for the first 800 miles or so until he launches into free form Beat poetry in the middle of the night from behind the wheel.  These two guys add edge, completely lost in their own self-contained worlds, where Llewyn is a nobody in their eyes.  It’s the perfect lead-in for his existential journey to nowhere, having burned all his bridges and alienated everyone around him.  Only familiar with the old songs, where the appeal is drying up even for Llewyn, he’s starting to hate folk music and everything it represents, “If it’s never been new and it never gets old, it’s a folk song,” where he can be heard screaming at one point “I hate fuckin’ folk music!”  When his sister Joy (Jeanine Serralles) asks if he might consider a life outside of folk singing, Llewyn replies, “What, quit?  Just exist?” to which she responds, “Exist?  Is that what we do outside of show business?”  Spending a good portion of the film carrying and/or chasing after a cat named Ulysses, even on the subway, a journey unto itself, expressed in a long and beautiful ride through the heart of New York showing Llewyn lost in thought while the camera captures a reflection of the cat’s ponderous stare in the window, the film has no structured narrative, but simply provides an impressionistic mosaic of all the things Llewyn does wrong, how he blows every opportunity, blaming everyone but himself, alienating all his friends with his abrasive personality, never able to successfully channel his mania for music, where he seems doomed to wander like a Sisyphus character, waiting for a future that never arrives, becoming another one of the classic anti-heroes in the Coen mythology, where over the end credits an uncredited Dave Van Ronk can be heard singing The Late, Great Dave Van Ronk: "Green Green Rocky Road" YouTube (5:54).  Somehow, the film took the second prize with the Grand Prix Award at Cannes.  Unlike O Brother, Where Art Thou? (2000), which featured a musical soundtrack that lead to a revival of bluegrass country music, folk music is slower and more seriously downbeat, much of it a reflection of the hard years of the Great Depression, where its era 50 years ago *before* the violent student demonstrations of the late 60’s and before the influence of urban hip hop rhythms is not likely to experience a similar rebirth, where the Coen’s parody of the boring verse repetition in “500 Miles” Peter Paul and Mary, 500 Miles YouTube (2:53) with a hootenanny audience obediently singing along suggests it would simply not be tolerated by today’s more restlessly uptempo youth.
Posted by Robert Kennedy at 8:19 AM