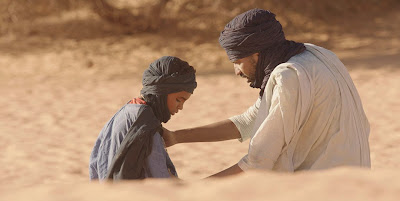 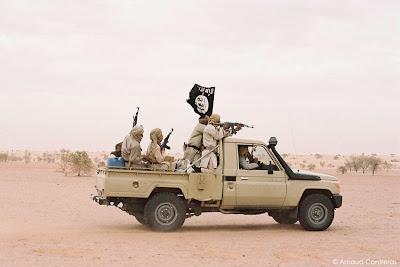 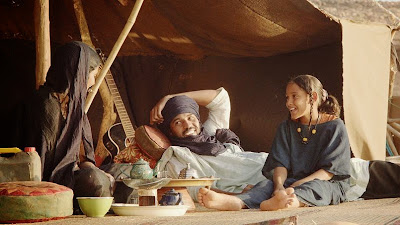 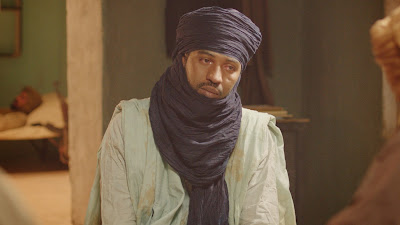 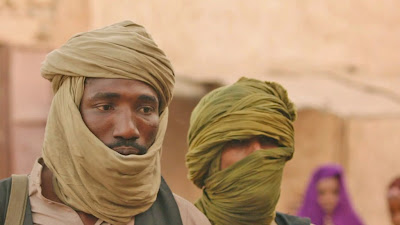 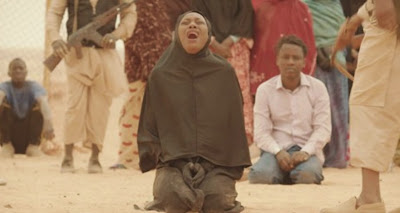 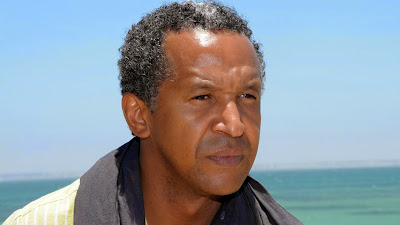 They’re singing praise to the Lord and his prophet; should I arrest them?
—young soldier radioing his superior

This film couldn’t be more timely, as it’s perhaps the only film that predicts the presence of a murderous rogue Islamic militant group like ISIL currently grabbing the headlines with beheadings and unparalleled violence, as it’s based upon real incidents that took place in Northern Mali in 2012 when Ansar Dine Islamic militants occupied Timbuktu, once the center of scholarly Islamic learning in Africa, burning down the only public library, the Ahmed Baba Institute, including 18,000 historical manuscripts in the process.  But in particular what captured the director’s attention was an event depicted in the film, the public stoning of a young unmarried couple in the northern town of Aguelhok, both buried up to their necks and stoned to death in front of hundreds of watchers, a horribly tragic incident precipitated by their view that the couple was committing a crime against divine law.  According to Sissako, “Aguelhok is neither Damascus nor Teheran, and in no way am I looking to over-emotionalize these events for the purposes of a moving film.  What I do want to do is bear witness as a filmmaker.  Because I will never be able to say I didn’t know.  And because of what I know now, I must tell this story — in the hope that no child may ever have to learn this same lesson in the future.  That their parents could die, simply because they love each other.”  Historically, different tribes controlled Timbuktu until the French colonized Mali in 1893, granting their independence in 1960, where it remains one of the poorest regions in the world.  At the request of the government, the French military was eventually called in to run the Tuareg rebels out of the region and re-establish order, where the country recently conducted democratic elections.  While the filmmaker was born in nearby Mauritania, where he was forced to shoot the film due to the actual turmoil taking place in Timbuktu, he completed his early childhood education in Mali before returning home.  He studied cinema in Moscow at the prestigious VGIK (Federal State Film Institute) and now lives in Paris, where he discovered most of the non-professional cast he used, as well as the cinematographer Sofian El Fani, who shot Kechiche’s Blue Is the Warmest Color (La Vie d'Adèle, Chapitres 1 et 2) (2013).  Many of the lead roles are played by professional singers, the most prominent being Malian musician Fatoumata Diawara, seen here Fatoumata Diawara - Bissa (OFFICIAL VIDEO) - YouTube (3:24).

Initially screened in competition at Cannes, the film reportedly received a 10-minute standing ovation afterwards and won the Prize of the Ecumenical Jury honoring works inspired by “the spiritual dimension of our existence,” and also the François Chalais Prize recognizing “the values of journalism.”  What Sissako brings to the subject is pure cinematic poetry, a common thread throughout his films, including WAITING FOR HAPPINESS (2002), winner of the FIPRESCI Award at Cannes, while also awarded the French Culture Award as the Best Foreign Cineaste of the Year, and BAMAKO (2006), a thought provoking film that examines the effects of globalization in Africa, specifically Mali, where the first world G8 nations historically stole what they could from African nations through colonialist exploitation, only to be replaced today by the World Bank and the International Monetary Fund financial systems that remain even more deeply entrenched through the huge debts these impoverished nations supposedly owe to these international institutions, ranging from 40 to 60% of the nation’s total income.  Perhaps even more prescient was the director’s humorous insertion of a film within a film, a fictitious, rather cartoonish American film playing in the region called DEATH IN TIMBUKTU starring Danny Glover in a Sergio Leone style Hollywood western depicting a small African village falling under a torrent of bullets to rebel outsiders, watched in a feverish trance by children, a rather unfathomable intersection of fiction and reality.  While most of the news reports focus upon the wanton jihadist destruction of Timbuktu’s cultural heritage sites, outrageous acts that are themselves unconscionable, Sissako instead focuses upon the day to day effects it has on the local population, a tribal culture that has survived centuries in a brutally harsh sub-Sahara desert climate.  Opening in a stunning moment of lyrical beauty juxtaposed against the madness of ongoing violence, we see a truck of jihadists inexplicably firing machine guns at a deer/gazelle streaking through the desert, where the movement is captured as poetry in motion.  In the next shot, tribal carvings are destroyed by machine gun fire, where the centuries-old traditions of the past are wiped away in seconds.  The incomprehensible aspect is our entryway into understanding the presence of this occupied force, which goes against the laws of nature.  When they enter the mosque with their weapons, explaining they are practicing jihad, the local imam (Adel Mahmoud Cherif) tells them he is practicing jihad as well, but in Timbuktu they use the mind instead of weapons, where bringing guns into the mosque is a disgrace to the piety of God.

The film recalls the insidious terror expressed in Raoul Peck’s Haitian film The Man On the Shore (L’Homme sur les quais) (1993), shot during the reign of the Duvalier dictatorship and his armed militia, the Tontons Macoute, who similarly terrorized the population.  The villagers in Timbuktu are comprised of various ethnic groups speaking French, Bambara, Songhay, and Tamasheq living in harmony with the nomadic Tuareg people, while these militants bring with them Arabic and even English speaking jihadists from around the globe, where the irony is they have soldiers drive around the city in trucks with loud speakers warning residents of the new laws, where they are not allowed to sing, play music, or dance, while covered women must wear socks at all times and gloves on their hands, but they require multi-lingual interpreters to get their ultra orthodox message of forbidden activities across.  Easily the most absurd example is banning the game of soccer, with armed men with machine guns taking the ball away, leaving the fully dressed players in uniform to continue playing without the ball in a choreographed, ballet-like pantomime that expresses the joy and beauty of movement, where these guys revere the skill level of Lionel Messi and imitate his post goal scoring celebratory moves on the field.  Mali is also known around the world for their intricate music, where the names of Ali Farka Touré and Oumou Sangaré spring to mind, where the idea of soldiers silencing these voices is catastrophic, but real, as they go house to house hunting down the origins of musical sounds, arresting those responsible, including Fatoumata Diawara and others who are then given 40 lashes in public, where she breaks out in song midway through her punishment.  Anyone who has seen Steve McQueen’s 12 Years a Slave (2013) will appreciate the profound difference in how this is visually expressed, losing the grotesque aspect of mutilated flesh, where the focus is on pain, and instead adds a poetic lyricism that highlights the injustice.  Inflicting punishment, like the public stoning, appears to be the goal of Ansar Dine rebels, where they round up villagers and subject them to a fundamentalist interpretation of Islamic sharia law, bringing the imam out of the temple to question where does God enter into these ungodly actions?  When a young girl is hauled out of her home and forced into marriage to one of the armed rebels against the protests of her family, the ruling court claims this is perfectly legal, as “We are the guardians of all deeds.”  Against this backdrop, another local family is destroyed, where Kidane (Ibrahim Ahmed, aka Pino) is a goat and cattle herder living in the freedom of a tent out in the desert with his wife Satima (Toulou Kiki), young daughter Toya, while also raising a young orphan Issan, who tends to the cattle every day.  When a local dispute over a dead cow results in an accidental death, Kidane is arrested and immediately sentenced to death, where the harsh and excessive punishment contrasts against the sight of rebels routinely violating their own rules, including one that lusts after Kidane’s wife, where the lingering question raised at the end is who will they be coming after next, as instead of a deer they are chasing down humans.
Posted by Robert Kennedy at 1:08 AM