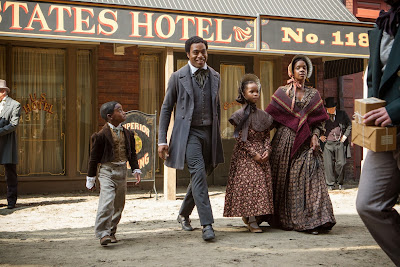 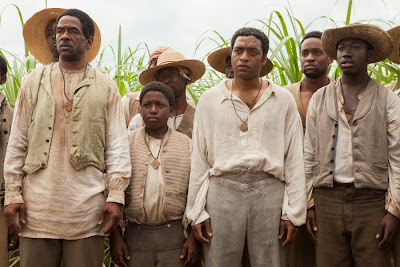 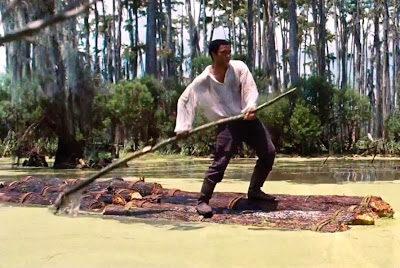 I can speak of Slavery only so far as it came under my own observation—only so far as I have known and experienced it in my own person.  My object is, to give a candid and truthful statement of facts: to repeat the story of my life, without exaggeration, leaving it for others to determine, whether even the pages of fiction present a picture of more cruel wrong or a severer bondage.
—Solomon Northrup, 12 Years a Slave, 1853

The world has still not come to terms with the slavery issue, as it continues in various forms, such as the trafficking of underage sex slave rings in a criminally underground Asian black market.  But the historical implications of the African slave trade from the 16th through to the 19th centuries remains thoroughly grounded in emotional hysteria as far as American movies are concerned, as the only way these stories are told, if at all, is to melodramatically elevate the misery so it’s nearly unwatchable, then afterwards overpraise the film as a way of overcompensating for the nation’s surprising disinterest in the subject.  Since the Civil Rights era, little has changed to alter the sheer ignorance this nation suffers on racial matters, where despite being a racially diverse country overall, the large majority of the country never lives with or mingles with persons from other races, where in some states you can live there literally for years without ever seeing a person of color.  So while laws have been passed and school textbooks updated, they remain largely ignored, as they matter little in the everyday ordinary lives of most people, as they continue to live separately and lead segregated lives.  Races are brought together in the military, civil service jobs, or in racially mixed schools, but even then they tend to separate by race.  What does this tell us?  Only that we continue to ignore this issue overall, and with our first black President, it has a way of rearing its ugly head so that even good intentions are misread and given hateful implications, continually believing that no good can ever come out of racial harmony.

You’d think Nelson Mandela’s inspirational rise from serving a 27-year prison sentence during the Apartheid era in South Africa to becoming the nation’s first black President at the age of 76, showing no malice towards those who imprisoned him all those years, would be inspiration enough for the world to take note and rethink its views on race.  But that would make too much sense, while racism is an insidious disease that spreads throughout society out of sheer ignorance, where often even the educated haven’t a clue.  While this film is receiving plenty of accolades, it unfortunately doesn’t deserve them, as the film does next to nothing to elevate the discussion, and instead turns racial injustice into a depiction of psychopathic hysteria, as if only crazy people owned slaves, driven by psychotic sadistic delusions about superiority and property ownership, where the movie mindset is continually stuck in this stereotypical realm of inflicting as much misery on the audience, as if this represents dramatic or historical truth.  When it comes to slavery, subtlety is never a possibility, as instead the audience is hammered over the head with neverending images of cruelty and torture, really not much different than standard Hollywood action thrillers, but then the film is prefaced by the favored phrase, “based on a true story,” which suggests it’s all in the name of truth, which hides the fact it’s more likely about the almighty dollar, where truth and melodrama are often confused as one and the same.

Steve McQueen is no slouch as a black British director, winner of a Turner Prize and the maker of the exquisite film HUNGER (2008) about the 1981 Irish hunger strike when one by one Irish prisoners were allowed to die in prison for a political cause in order for the British to absurdly prove a non-existent point that they were not political prisoners, prompting international media attention when 10 prisoners starved themselves to death, including their leader Bobby Sands who was elected as a Member of Parliament while in prison, a thoroughly complex film that at its center becomes a twenty-minute uninterrupted dramatic scene between Sands and a Catholic priest arguing the moral principles.  Why that film is hauntingly dramatic and this film is emotionally stagnant most likely lies in the way the subjects are portrayed, as one has a life or death urgency, while the other uses familiar movie stereotypes to accentuate the punishment.  In HUNGER, through a build-up of meticulous detail, it’s about a clarity of vision elevating the material, while in 12 YEARS A SLAVE, it’s about the misery inflicted, even more grisly than it was portrayed in ROOTS (1976), a made-for-TV miniseries that was made 35 years ago, becoming yet another example of the latest trend for the movies to utilize torture porn.  The problem with McQueen’s film is that it offers us nothing new, with slavery defining blacks as inferior and sub-human, telling us what we already know using the same stereotypical images of plantation slavery, where the grueling experience is exaggerated to epic proportions by the sheer cruelty of the slaveowners.

While this film is based on free blacks being kidnapped into slavery, only this one example is cited, lending no historical perspective whatsoever, as there’s no mention of other American citizens facing similar abductions, so the audience hasn’t a clue how often this happened.  It appears to be a rare instance, and especially fortunate that Solomon just happened to be assigned to work with a liberal thinking white man (Brad Pitt), the only instance of slaves assigned to work side-by-side with whites in the entire picture.  Even the actions of the local sheriff in offering such little resistance and obeying a “Yankee law” seems far-fetched, as even one-hundred years later Southern governors were notoriously defying government imposed laws that differentiated with their highly prized concept of race and state’s rights.  Better films on slavery would be Jonathan Demme’s adaptation of the Toni Morrison novel in the film BELOVED (1998) which uses the supernatural as a near religious, transcendent experience in order to comprehend the depths of grief and trauma involved, while Pierre Yves-Borgeaud’s RETURN TO GORÉE (2007) follows Senegalese singer/songwriter Youssou N'Dour on a jazz pilgrimage, recognizing the music of jazz is a byproduct of slavery, tracing the origins to the original slave routes in Africa where many of the same complicated rhythms can still be heard by musicians on the streets, as music is again used as a transcendent experience, where the chilling horrors of slavery are poetically rendered while offering a remarkable gesture of grace and human reconciliation.

Chiwetel Ejiofor is excellent as Solomon Northrup, a free black man living in the north in 1841 who was kidnapped and smuggled into slavery in the deep South, based on a book that’s a hundred and sixty years old, originally published in 1853, turning into a Pinocchio story where his role in the movie is basically to witness and/or endure every last bit of human depravity associated with slavery, which has a way of deadening one’s humanity in order to preserve the plantation way of life for white slaveowners.  Interestingly both male and female slaveowners inflict with equal measure the same horrifically brutal punishments, at times hanged or beaten to death, where slaves are relentlessly attacked under one hideously sadistic assault after another, supposedly proving a point about power and superiority.  While the dehumanization depicted in Pinocchio becomes a moral tale on discovering one’s true humanity, not so here, as slavery remains mired in barbaric treatment, where the picture assumes viewers need to relive this experience for themselves and suffer the same indignities and savagery that is connected to slavery.  The problem is the director never elevates the material above the hellish conditions, keeping the viewer imprisoned in the most demoralizing mindset possible, so the entire film is a portrait of that hell.  Like a plethora of Holocaust films that all tap into the same feeling of wretched misery, this is another venture into unending and unimaginable horrors, though it is beautifully photographed and artfully presented, not that this framing technique in any way enhances or detracts from the experience, as it remains pure and utter miserablism, an artform unto itself.
Posted by Robert Kennedy at 1:21 AM