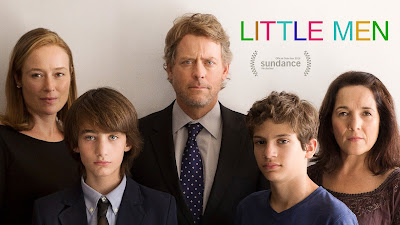 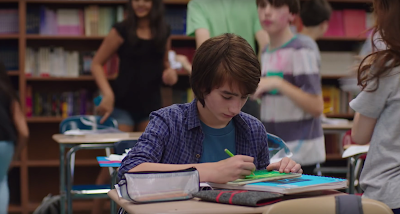 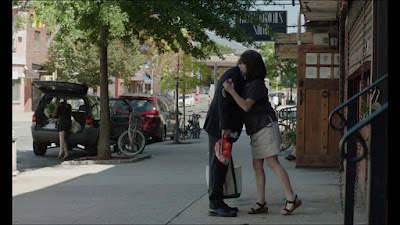 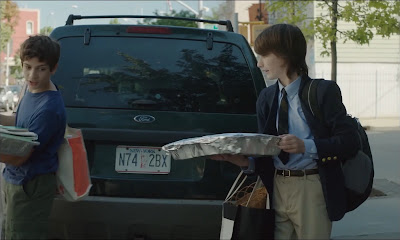 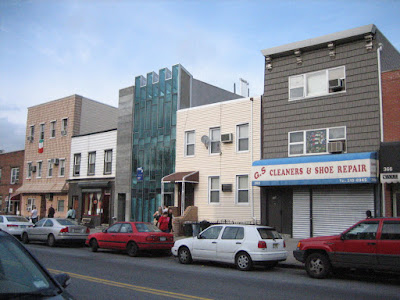 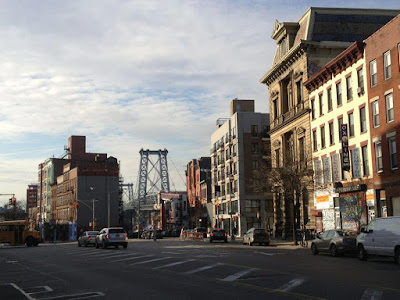 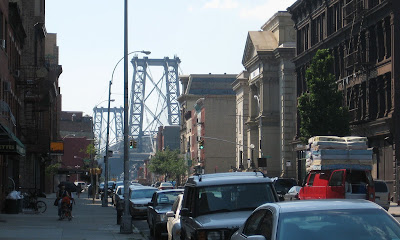 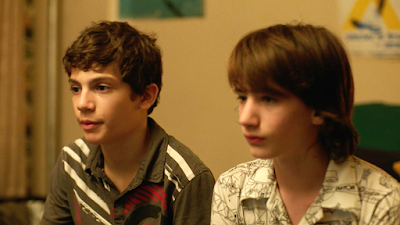 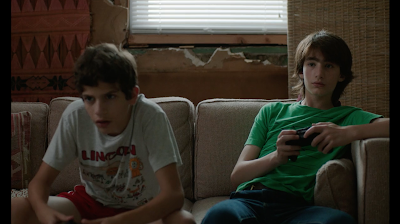 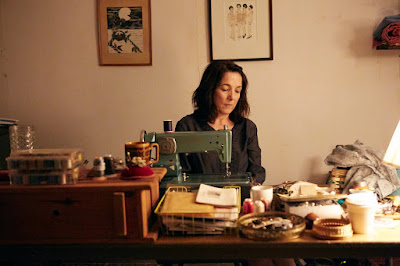 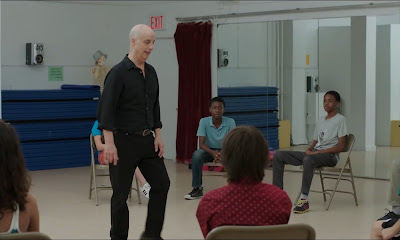 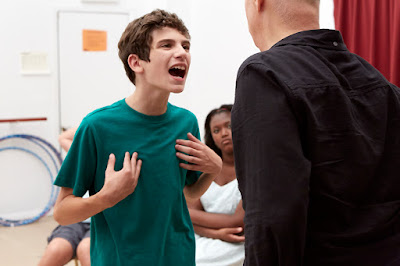 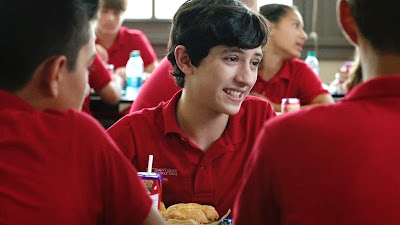 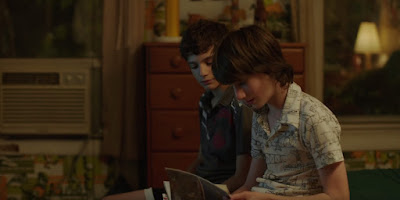 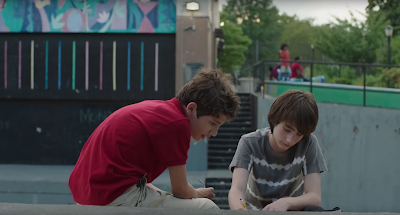 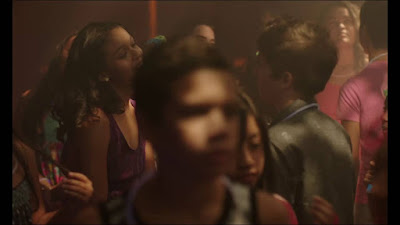 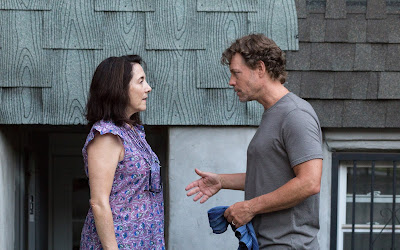 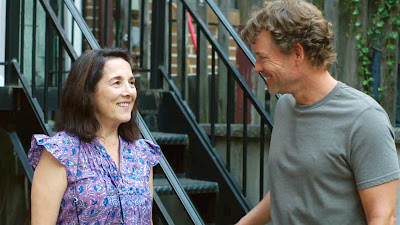 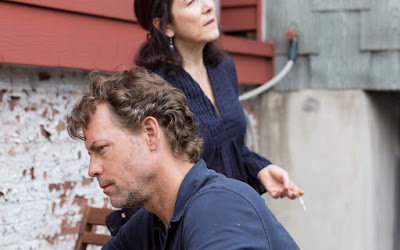 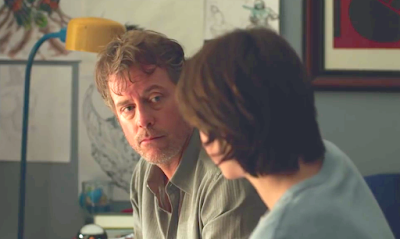 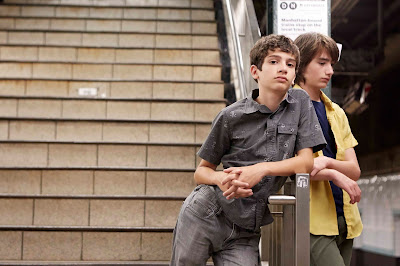 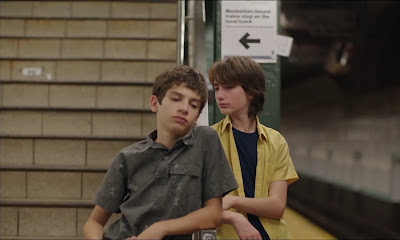 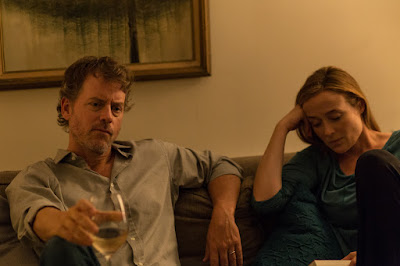 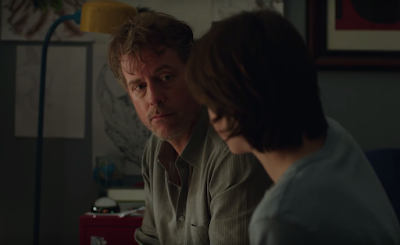 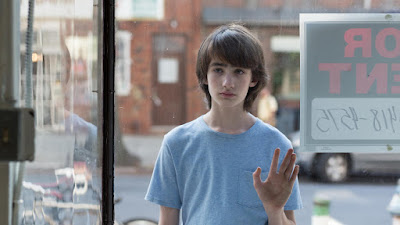 Our parents are involved in a business matter, and it’s getting ugly, so they’re taking it out on us.   —Tony Calvelli (Michael Barbieri)

Ira Sachs has been described as a New York City filmmaker, where like many who have come before him, the city is used as a backdrop throughout the film, highlighting the scintillating streets of New York, feeding off the thriving neighborhood energy, where diversity in the population goes almost unnoticed, viewed as part of the changing landscape, yet has a major impact in his intimate dramas.  Quoting Bilge Ebiri, Sundance Review: Little Men -- Vulture:  “If Martin Scorsese was the quintessential auteur of New York in the 1970’s and 80’s — with its wise guys and street toughs — and Spike Lee that of New York in the late 80’s and 90’s — with its Balkanized enclaves and attitudes — then Ira Sachs is gradually becoming the quintessential auteur of today’s New York — the one of class inequality, and of relationships transformed by the changing city around them.”  Offering expansive ideas in a small film, the drama is concise, yet very powerful, feeling like a follow up to Fred Wiseman’s In Jackson Heights (2015), highlighting the ethnic diversity that exists within this New York City neighborhood in north-central Queens that’s being driven out by real estate prices and gentrification, yet while Wiseman’s is filled with detail and minutiae, this film provides all the heart that is missing in that film.  New York is increasingly just for the rich, with entire neighborhoods driven out of existence by rising costs.  Specializing in stories about people in crisis, this film focuses on two different families living in the same building where common interests unite them and bring them together, only to eventually be separated by class distinctions, where the exorbitant price of real estate in New York City ultimately becomes a wedge that becomes more powerful than existing bonds of friendship.  It’s a traumatizing story filled with heartache, yet offers a distinct view of how urban neighborhoods drive out the minorities through supposed economic concerns, never admitting to any prejudicial views, yet the racial component is unmistakable.  The future in each case is uniquely different depending on whose shoes you happen to be in, where white privilege and a sense of yuppie entitlement aggravates existing tensions, creating an anxious divide of class hypocrisy where there was once harmony, or at least tolerance.  The gentrification conflict is one most urban residents can recognize, as few neighborhoods are spared, where tense Brooklyn real estate dilemmas have been seen in movies before, including Hal Ashby’s THE LANDLORD (1970), Spike Lee’s Do the Right Thing (1989), and Noah Baumbach’s THE SQUID AND THE WHALE (2005), but this is one of the few that cares to explore the personal impact.  Lest we forget, cities across America were formed by an influx of people migrating from different parts of the country and from around the globe all seeking work, where the postwar generation after WW II felt a special obligation to shelter those that were driven from their homelands during the war, where a welcoming spirit was synonymous with the American spirit, where the Statue of Liberty reads, in part:

Give me your tired, your poor,
Your huddled masses yearning to breathe free,
The wretched refuse of your teeming shore.
Send these, the homeless, tempest-tossed to me,
I lift my lamp beside the golden door!

But generational shifts have changed that sentiment, with greed playing its part, where people only care about themselves.  This film is like a time capsule into the mindset of the modern era revealing how once revered values have been excoriated and tossed aside to make way for more selfish concerns.  This is the changing face of America, where minorities are once again excluded, but this time there’s no redlining, no mention of housing discrimination, no need to establish malicious intent, as it’s all done legally, where the competitive market drives the jacked up prices, and those on the economic fringe are sent away in droves.  Whites left the inner cities in the 50’s and 60’s for safety concerns, superior schools, and the promise of a better life in the mostly white suburbs, but now, with newly attained wealth, they’re moving back into the cities building million dollar mansions that drive up the real estate prices.  While this film never provides any political backstory, it clearly shows the drastic human impact of gentrification on ordinary families.  The film was shot in the Williamsburg neighborhood in Brooklyn, though it’s never mentioned by name.  “You’re gonna like this neighborhood, it’s become a very…bohemian area.”  Meet Tony (Michael Barbieri), a charismatic and wildly precocious 13-year old as he introduces himself to Jake (Theo Tapitz), a contemplative, aspiring artist who likes to draw but keeps to himself most of the time and doesn’t make friends easily.  These two are the titular heroes of the film, snubbed and socially excluded around others, yet easygoing and likeable with each other where they instantly flourish, becoming inseparable over time, probably the best thing that ever happened to either one of them, as they’re simply on the same wavelength.  Like a shelter from the storm, protected by the innocence of childhood, the two remain immune to the various problems of the adult world, which strike at the opening with the death of Jake’s grandfather, where a memorial service is held in his behalf.  We are quickly introduced to Jake’s parents, an Upper West Side couple from Manhattan that includes Brian (Greg Kinnear), an actor on the fringe doing scantily paid non-profit works, and Kathy (Jennifer Ehle), a psychotherapist who supports the family, often called away for emergency medical situations.  In order to help make ends meet, they move to their grandfather’s home in Brooklyn, something he left for his family, where one of the first things we hear from Brian, “You know, I grew up in this house.”  While they live on the second floor, the first floor has a dress shop, a small boutique with handmade dresses made and designed by Leonor, Paulina García from Gloria (2013) , almost always seen working tirelessly at her sewing machine, a single Chilean immigrant mother who lives with her son Tony, the same age as Jake.  By some apparent oversight that seems benign at the time, Leonor was not even invited to the funeral services, yet both sets of parents seem thrilled that their children have taken an instant liking to one another, apparently filling a previously existing social void.

The rhythm of the film is established by the brash energy of the two kids, who also carry the dramatic weight of the film, often seen careening around the sidewalks of the city, Tony on his kick scooter with Jake on rollerblades, accompanied by long musical interludes composed by Dickon Hinchliffe, known for his poetic music in Claire Denis films, where the kids discover the city around them at the same time they explore their developing relationship.  Stylistically, shot by cinematographer Óscar Durán, these are among the best scenes of the film, as they broaden the compositions to include a wider canvas of New York City in flux, often seen in painterly images, like views of the Verrazano–Narrows Bridge expressed with a liberating fluidity of movement, where it’s as if the kids are clearing their heads of any and all emotional baggage, leaving them open and more receptive for something new.   Both decide they want to attend the LaGuardia High School for the Performing Arts, the same one, Tony notes, attended by Al Pacino and Nicki Minaj, though apparently Pacino dropped out.  Tony, the true revelation in this film, wants to be an actor, while Jake draws and paints.  One of the scenes of the film is an acting exercise with Tony mimicking his screaming instructor (Mauricio Bustamante), each trying to gain the upper hand, with the kid holding his own throughout, Little Men CLIP - You Did it Again (2016) - Michael Barbieri Movie YouTube (1:49).  But reality intrudes, where flamboyance is replaced by the claustrophobic inertia of the adult world, reflected by Brian’s performance in Chekhov’s The Seagull, and a decision made to restructure their finances.  With the intervention of Brian’s sister Audrey (Talia Balsam), who has also inherited a share of the home, they have come to realize that the downstairs apartment is worth five times more than the current rent, which hasn’t been raised since the neighborhood changed.  When Brian personally delivers a new lease tripling the rent (“still below market value” according to Audrey), Leonor doesn’t even have to look at it, as she knows the message being delivered.  Relations grow tense, as a seething Leonor refuses to respond, knowing she can’t pay what they demand, so Kathy intervenes, claiming she’s an expert in conflict resolution, but it feels a lot like bullying, as the point of view is one way only, as Leonor’s position is completely ignored, blocked from reality, as it’s all about dollars and cents.  While Brian tries to be a decent guy, it’s clear he’s not at all like his father, who was the epitome of a decent guy, willing to overlook financial concerns as he felt the neighborhood benefited from the presence of Leonor’s one-of-a-kind boutique.  Their talks grow colder and more personally hurtful, where Leonor suggests she was actually closer to his father than Brian, speaking every day for years, where she tended to him when he grew sick and frail, reminding Brian that he was never there.  None of that matters, however, even after the kids give their parents the silent treatment, knowing something poisonous is in the air, but they are thunderstruck to learn Leonor is getting evicted, with Jake breaking the silence, offering a tearful, desperate final plea that is also ignored.  So much for conflict resolution, or the best interests of your kids, who end up being pawns in a grown-up battle, where class and country of origin are never mentioned, as only money matters.  The unseen emotional toll in this film is reminiscent of Baumbach’s THE SQUID AND THE WHALE (2005), with divorced parents fighting to supposedly maintain the best interests of their children, but only end up inflicting further harm.  The final epilogue sequence has an air of inevitability around it, filmed inside the Brooklyn Museum, offering a tragic sense of something lost.
Posted by Robert Kennedy at 6:09 PM