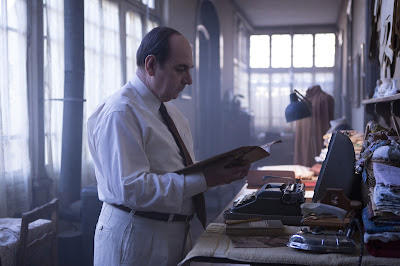 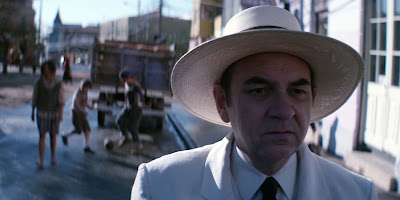 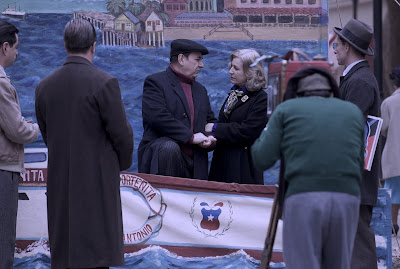 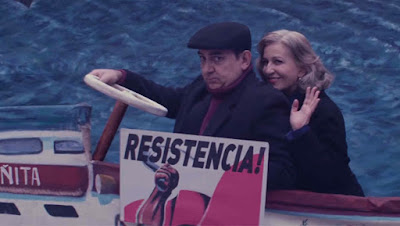 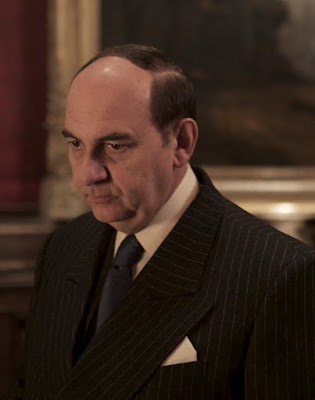 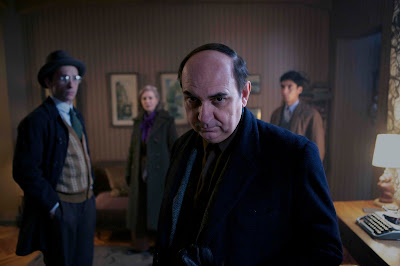 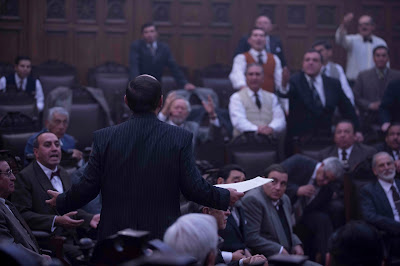 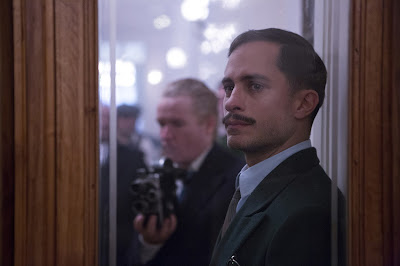 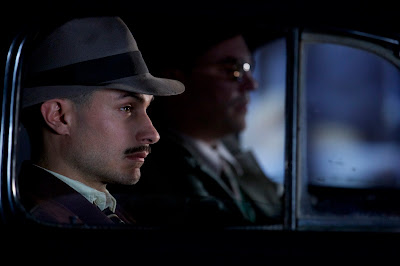 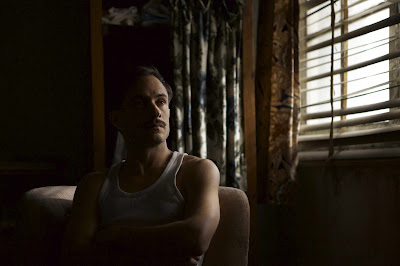 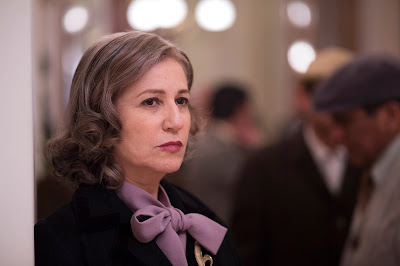 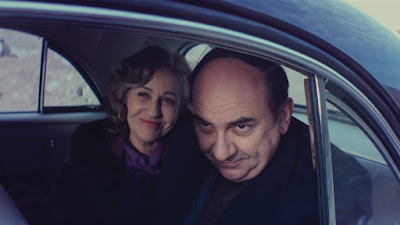 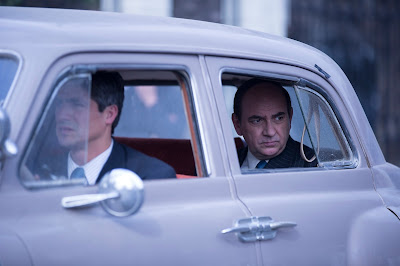 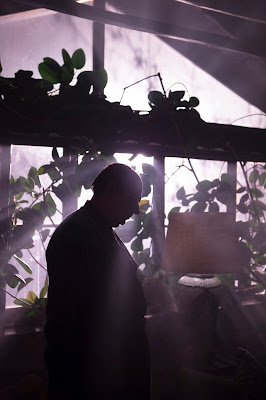 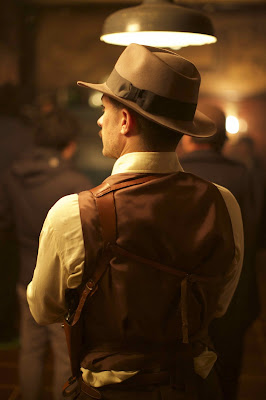 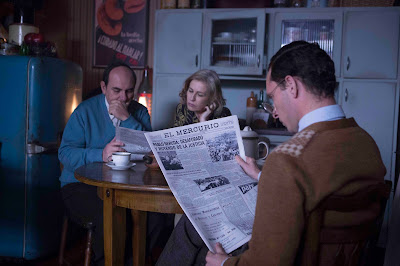 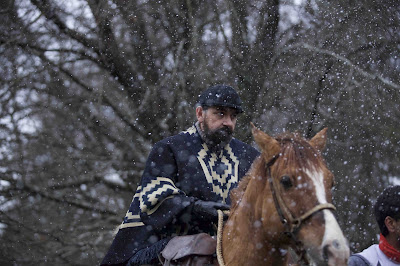 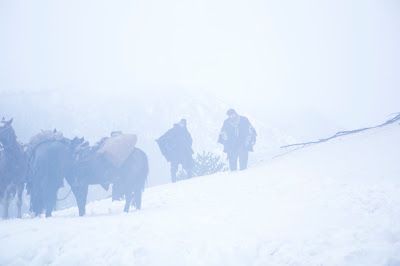 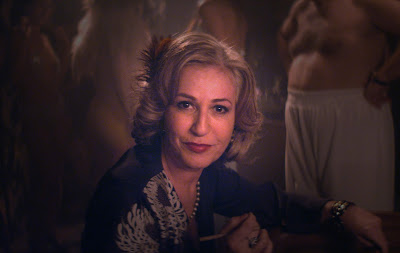 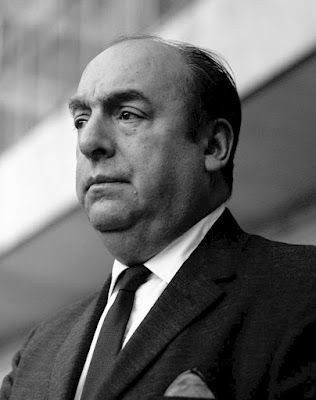 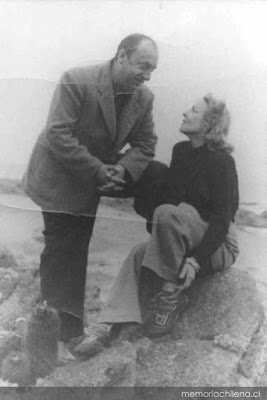 On our earth, before writing was invented, before the printing press was invented, poetry flourished.  That is why we know that poetry is like bread; it should be shared by all, by scholars and by peasants, by all our vast, incredible, extraordinary family of humanity.
—Pablo Neruda

One might think this is a wildly imaginative and somewhat chaotic way of revealing the interior thoughts of one of the world’s greatest poets, Pablo Neruda, yet instead, like Larraín’s other works, it remains coolly ineffectual, revealing next to nothing about the man or his poetry, becoming a kind of man-on-the-run political spoof, as the director’s mocking style simply deludes reality.  What we do know about Neruda cannot be found in this film, as it makes no attempts to be biographically informative, but instead persists on examining just one of the post-World War II years in Chile when Gabriel González Videla was President from 1946 to 1952.  After receiving support from communists to get elected, which at that time were split with the socialists, at the urging of the United States the nation banned the Communist Party, first expelling them from the cabinet before outlawing them as a political party in 1948, a ban that remained in effect until 1958.  With a crackdown on communists who were subjected to mass arrests, stripped of their right to vote, poet and Communist Senator Pablo Neruda (Luis Gnecco) offered a seething rebuke to the President, first at an outrageously surreal political gathering set inside a lavish public urinal the size of a department store with all the distinguished guests present before criticizing the President for “selling out to the United States” in a speech before the National Congress.  Shortly afterwards he was forced underground where he remained in hiding for the next thirteen months before spending the next three years in exile after escaping over the Andes Mountains to Argentina on horseback, a story dramatically recalled during his Nobel Prize acceptance speech in 1971.  From the champagne parties with naked revelers to his bohemian relationship with fellow artist Delia del Carril (Mercedes Morán), it’s clear Neruda was no ordinary communist, where the rules of the game made exceptions for his presence.  Delia joined the French Communist Party after the First World War, as she was studying painting in Paris at the time, where they initially met in the mid 1930’s when she was 50 years old and he was only 30, but their age difference was offset by her intelligence, vitality, and beauty, as their home became a meeting place for the great intellectuals, artists and writers of the time.

Unfortunately Larraín’s unsettling and overly confusing film won’t make a dent in Neruda’s popularity, which was buoyed immensely by the massive popularity of the film Il Postino (The Postman) (1994), a fictional film based on a novel inspired by an incident in Neruda’s life, the only foreign-language film to be nominated for a Best Picture Award in more than 20 years, where the theatrical run was so long (almost two years), it was still in theaters after the video release and its initial cable run.  Gabriel García Márquez called Neruda “the greatest poet of the 20th century in any language,” while New York Times book review critic Selden Rodman observed after the poet’s death, “No writer of world renown is perhaps so little known to North Americans,” yet surprisingly this film contains little poetry, doling it out almost exclusively through narrative passages, as instead the film invents a plot device in the questionable character of Oscar Peluchonneau (Gael García Bernal), a fascist police inspector that hounds him through his various escape routes, always one step behind, taunted along the way with notes placed in books of poetry left behind by Neruda.  This fascination with an alter-ego is along the lines of Sherlock Holmes and his infamous Moriarty, while the cat and mouse game alters the entire mood of the film, offering a playful, illusionary tone that has the effect of keeping the viewers off-guard as well, as Peluchonneau is something of a delusional fool, “half moron, half idiot,” as he’s described near the end, yet the film is narrated throughout by his less than trustworthy character, where the entire film exists in a kind of bogus stream-of-conscious netherworld.  It’s a choice made the director that has a way of preventing identification with any of the characters, remaining elusive and overly detached.  If interior passages of Neruda’s poetry had played a more significant part, adding emotional resonance to the communist struggle, for instance, this might have been an ingeniously inventive film, but as is, it feels strangely convoluted, where the artist himself remains distanced from those workers and peasants that he claims to maintain solidarity with throughout his journey.  Instead, while he escapes, we see them rounded up, arrested, and simply thrown into prison while he continually remains protected.  The chaotic nature of the film may reflect the extent of his alienation, but it offers little contact with the struggle, and no evidence of hope, where instead he remains bogged down by his own existential struggles.

Perhaps the most damning part of the film is its refusal to embrace the artistry of the poet, where we rarely, if ever, actually see him write or spend any time in reflection, where instead he’s shown as aloof and indifferent, having little regard for others.  While this is a landmark moment in Chilean history, onscreen we find Neruda partying in brothels with the bourgeoisie, showing a fondness for his sensual vices, where we never see that side of him that millions embrace through his writings.  While there is a reference that 10,000 union workers were moved to a stunned silence when he brought a piece of paper out of his pocket to read, or that he read his poetry before 100,000 citizens in Brazil, it is the power of his words to embrace human equality and to discover a common worldwide humanity, where his message of communism and worker’s rights is what made him dangerous to the government.  Yet we don’t get a hint of that, instead we’re bogged down by this idiot game with a delusional police inspector that doesn’t even exist, where the best he can do is drive around in circles in front of the Presidential Palace blowing the car horn to ensure the President doesn’t get a good night’s sleep, adding the comical element of farce to the psychological deficiencies of his tracker, continually moving from place to place, becoming a road movie simply by the changing locations.  While new poems are presumably mailed to the masses to keep the underground movement thriving, all we see are trips to the mailbox, as we don’t hear the poems, or see anyone other than the inspector reading them.  This disconnect prevents the viewers from learning more about the significance of this artist, as what lines of poetry we hear are mentioned right alongside the mysterious inner thoughts of the psychologically challenged police inspector, who yearns to catch his man, gather fame and adulation, while learning to be a bit of a poet himself.  Of course, none of that ever happens, so the messenger actually dilutes the message.  There is no transcending force that unites the artist with the struggle, instead the film seems more concerned about showcasing the police inspector’s ultimate failure, as if fascism would be overthrown or undermined by a lack of conscious, all of which feels strangely disconnected from the real cause.

Postscript (not in the film)

The ultimate irony is that Neruda was awarded the Nobel Prize for Literature in 1971, the year after the Chilean Communist Party nominated him for President.  He withdrew his nomination to make way for Socialist nominee Salvador Allende, who in 1970 became the first Marxist candidate to be a democratically elected President in any South American country, appointing Neruda to be the ambassador to France, returning to Chile in 1973 due to poor health, just in time for America’s intervention in a CIA sponsored coup d'état, surrounding the capital with troops, removing Allende from power by force (he allegedly committed suicide the next day), replacing him with a fascist military dictatorship lead by General Augusto Pinochet that remained in power until 1990.  Pinochet’s dictatorship dissolved Congress, suspended the Constitution, and began a persecution of alleged dissidents in which thousands of Allende supporters were kidnapped, tortured, and murdered.  Among them may have included Pablo Neruda, who was hospitalized with cancer, where he died under mysterious circumstances, with a doctor injecting an unknown substance into his stomach, with Neruda’s driver, Manuel Araya, claiming he was poisoned, perhaps under the orders of Pinochet, as he died six hours later.  What ultimately happened remains a mystery.  In contrast to JFK’s historic funeral procession, as shown in Larraín’s film Jackie (2016), where over 100 foreign dignitaries showed up and the entire nation watched on public television, Pinochet refused to allow Neruda’s funeral to become a public event, where it took place under a massive police presence, with Neruda’s house broken into, his papers and books taken or destroyed, while thousands of Chileans disobeyed the curfew and demonstrated on the streets.
Posted by Robert Kennedy at 12:00 AM