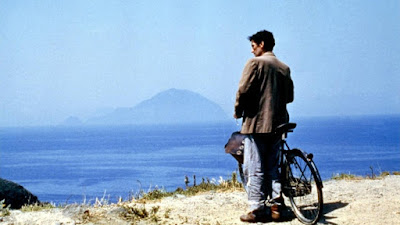 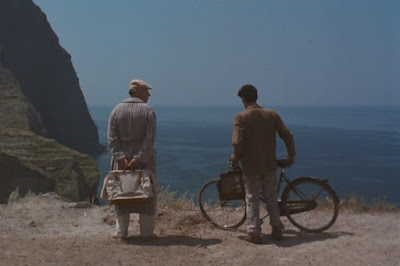 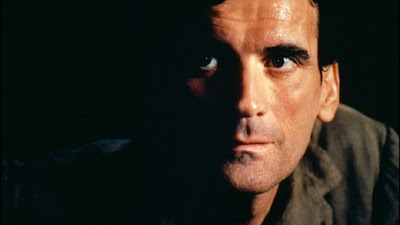 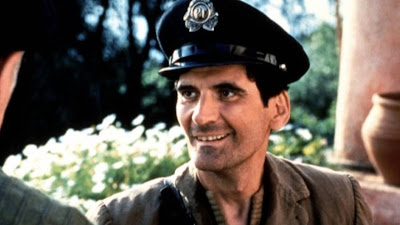 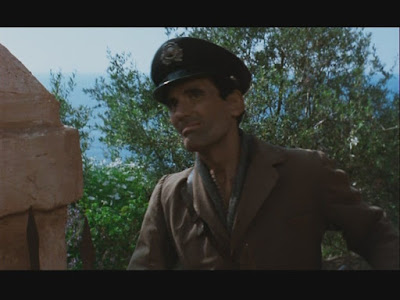 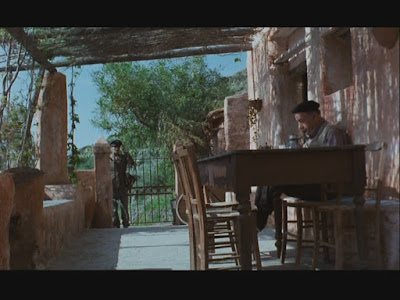 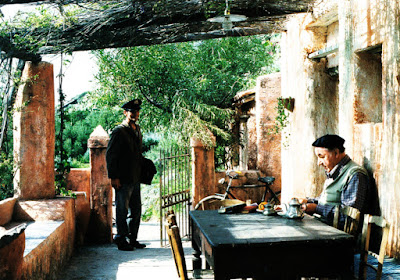 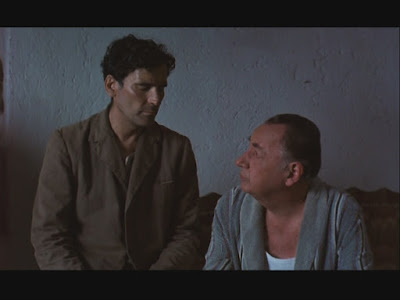 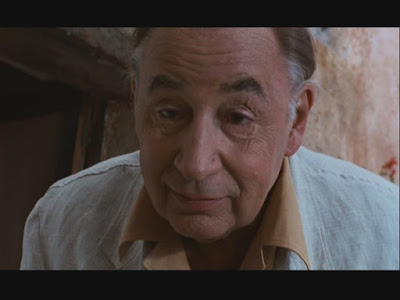 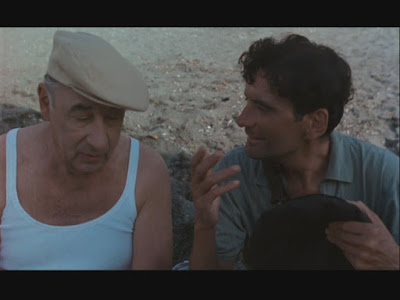 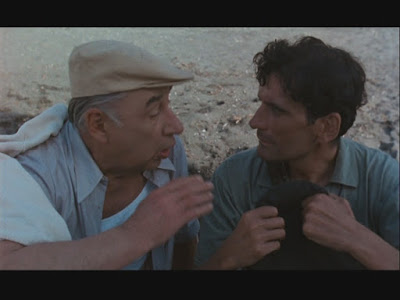 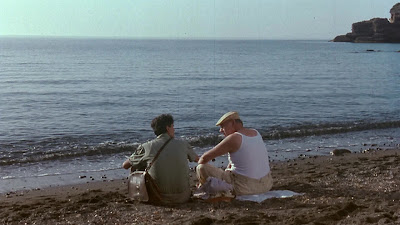 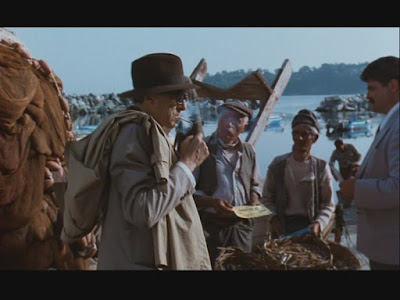 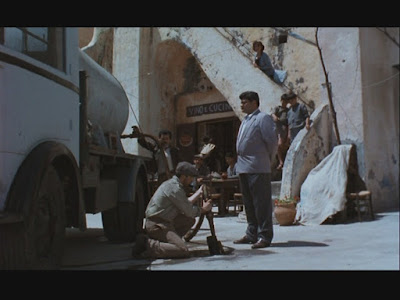 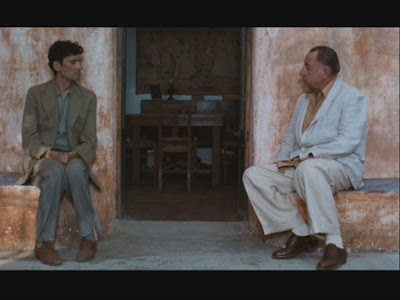 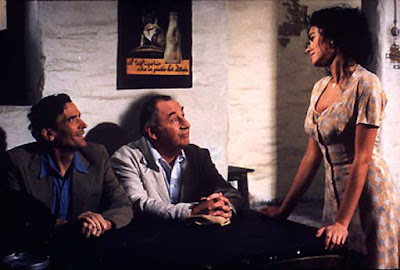 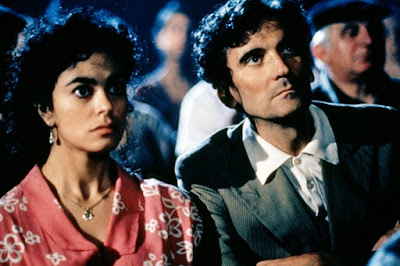 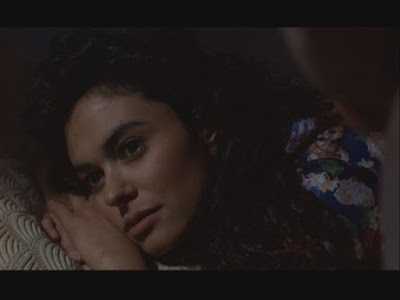 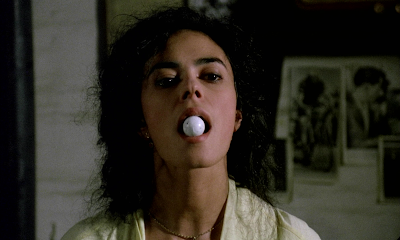 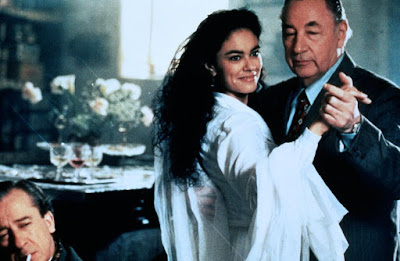 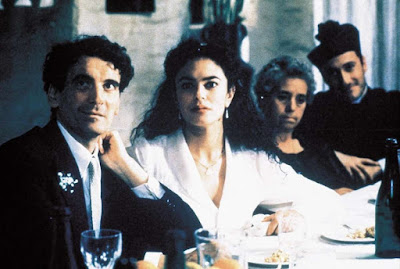 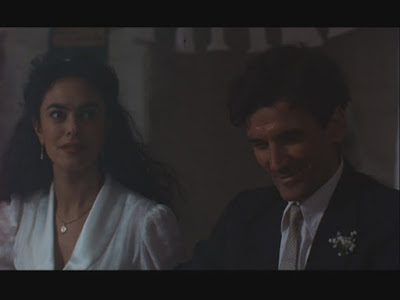 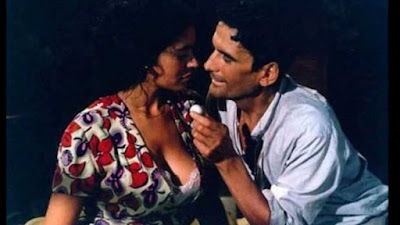 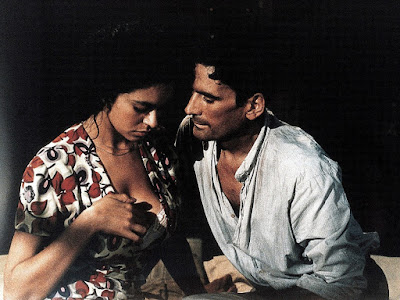 And it was at that age...Poetry arrived
in search of me. I don't know, I don't know where
it came from, from winter or a river.
I don't know how or when,
no, they were not voices, they were not
words, nor silence,
but from a street I was summoned,
from the branches of night,
abruptly from the others,
among violent fires
or returning alone,
there I was without a face
and it touched me.

An immensely popular Italian film that screened in American theaters for nearly two years, long after the video release and its initial cable run, spawning millions of new Pablo Neruda fans across the globe, as the film is a fictionalized account of an incident in Neruda’s life, adapted from the 1985 Chilean novel Burning Patience (Ardiente Paciencia, or El Cartero De Neruda) by Antonio Skármeta, which takes place in the early 1970’s on Isla Negra, the tiny Chilean village where Neruda lived, but is transported to a small Sicilian island in the film shortly after his exile from Chile in the early 1950’s when the Communist Party, embraced by the Marxist poet Neruda, was outlawed in Chile.  Nominated for five Academy Awards, winning for Best Musical Score, where for several years it was the highest grossing film ever made in a language other than English, the film is one of the few foreign-language films to be nominated for Best Picture, something that hadn’t happened since Bergman’s CRIES AND WHISPERS (1972) and the Costa-Gavras film Z (1969).  The film is largely a dream project of the lead actor, 41-year old Massimo Troisi, who was known mostly as a comic actor in Italy, but bought the rights for this movie and even helped write the screenplay, as he identified with the lead character.  Postponing heart surgery to make the film, the actor was extremely limited by his physical restrictions on the set, yet provided a poignant and enduring performance for which he will always be remembered, yet died tragically of heart failure one day after the shooting finished.  The film’s fascination with the poet Pablo Neruda (Philippe Noiret) is instantly compelling, as he’s known as the greatest poet in the history of the Spanish language, so when he decides to make this remote little island his home in exile, the residents, nearly all illiterate fishermen and their families, light up with excitement while watching cinema newsreels of the upcoming event, where the railway station in Rome that greets Neruda’s arrival was actually commissioned by Mussolini for the arrival of Hitler, but it wasn’t finished in time.  Choosing a charming mountainside villa with an outdoor terrace located between a volcano and the sea, the high cliffside location is probably the only luxurious home on the island, reachable by a winding dirt road that overlooks the Tyrrhenian Sea.  While Neruda once lived on the island of Capri in a villa owned by Italian historian Edwin Cerio, this film was shot on the nearby islands of Salina (rural and beach scenes), part of the Aeolian islands north of Sicily, and also Procida (harbor and village scenes), one of the Flegrean Islands off the coast of Naples, where the sunny, idyllic locations lend themselves to a dreamy, slow-moving, romantic adventure.

Set in a tiny Italian seaside village, it’s the story of a simple man, Mario Ruoppolo (Massimo Troisi), who breaks from tradition by being disinterested in being a fisherman, which makes him a bit of an outcast, and also out of a job.  So when he sees a sign on the post office (which doubles as a telegraph office) for a mail delivery man who has his own bicycle, it’s like a scene out of de Sica’s BICYCLE THIEVES (1948).  Inquiring within, he meets the rotund telegraph operator (the marvelous Renato Scarpa) who is looking to hire a temporary postman to deliver mail to the island’s lone customer, Pablo Neruda, where he’ll need a bike to climb up the cliffs.  The anonymity of the island is part of its charm, as there are no cars, few roads, but there are plenty of fishing boats in the harbor, which, outside of the church, becomes the town’s only thriving activity.  So when Mario arrives at Neruda’s door, he’s viewed as just another one of the nameless citizens inhabiting the island, all but ignoring him.  While Mario can read, he’s flabbergasted to learn that nearly all Neruda’s mail is coming from females, an observance he amusingly shares with his boss, who never forgets to remind him that Neruda is also a fervent communist, where concerns for social justice are something his boss admittedly shares with the poet, perhaps taking refuge in his political beliefs, as nearly all the residents on the island are poor.  To Mario, Neruda is a poet of love, jealous of all the women that flock to him, while to his boss, Neruda is a man of the people, a poet of the mistreated, reminding Mario that he shouldn’t linger and bother such an important man, but should at all times show him the respect he deserves.  Of course, Mario is a man who can’t help himself, as he’s a dreamer who’s curious about such an important man in their midst, where he can’t take his eyes off the poet (who looks surprisingly like the man himself), wondering about each and every thing, eventually blurting out his own interest in becoming a poet.  Neruda’s advice, upon reflection:  “Try to walk along the shore, as far as the bay, and look around you.”  Over time, Mario’s incessant questioning leads him to spend more time with Neruda, where his quizzical nature and halting speech seem so pure and innocent, almost childlike, yet the ever patient poet seems to delight in offering paternal wisdom, as it probably breaks up his day with these daily visits, often coming even when there’s no mail to deliver.  But there is no more excitable moment than when Mario rushes up the mountainside with earth-shattering news, where you’d think the Pope had died, but like a mandatory trip to the confessional, Mario needs the poet’s advice, as he has fallen madly in love.

The woman in question is Beatrice Russo (Maria Grazia Cucinotta), the lovely barmaid that works in her mother’s restaurant and bar, spending her days all to herself for the most part as the men are away at sea.  Mario is literally starstruck upon laying eyes on her, stunned, tongue-tied, unable to speak, where she may as well be an imaginary woman that exists only in his imagination, a beautiful woman loved from afar, where he excitedly asks the poet to write a poem to help him win the girl’s heart.  Reminiscent of Cyrano’s poems to the beautiful Roxane in Edmond Rostand’s classic Cyrano de Bergerac, Mario is positively befuddled when the poet refuses, stumbling over himself with unleashed anxiety, “Poetry doesn't belong to those who write it; it belongs to those who need it.”  Exasperated, with a sense of utter desperation, the poor man is flummoxed, lashing out sarcastically at the poet, “If you make this much of a fuss about one poem, you’re never going to win that Nobel Prize.”  Neruda, of course, takes it all in stride, as he’s romantically living with a mistress that will eventually become his third wife, Chilean singer Matilde Urrutia (Anna Bonaiuto), seen dancing together on the flowered outdoor terrace overlooking the sea.  While this may sound like the most far-fetched and sentimentalized story, it’s far from it, where both Troisi and Noiret are brilliant together, like long lost brothers who affectionately shelter each other from the storm, always warmhearted and intimate, having long conversations on the beach, where Mario’s driving needs are constantly spoiled by the seething rage of Beatrice’s mother (Linda Moretti), who is sure that communist poet is leading that boy into her daughter’s pants, pleading with the local priest to do something about it.  But sincerity wins out in the end, where the film becomes a brilliant blend of romanticism and social realism, where Neruda’s time on the island is short, able to return to his native land, where time goes by and Mario feels the poet has all but forgotten him, where he has to assume his own responsibilities.  But there’s a lovely turn of events when Mario returns to the villa to send items left behind, a nostalgic twist that gets at the heart of love and friendship, where he makes a recording of all the beautiful sounds that are unique to the island, including the heartbeat of his soon-to-be-born son, and sends them along, finding an extremely eloquent way to express a poetic finale, reminding viewers of the universal appeal of poetry and its ability to touch the very heart of humanity.  Neruda’s work is deceptively simple in the way it celebrates the beauty of everyday objects and people, loving women, loving life, and his fellow man.  The passion that Neruda exudes in his writing made him the object of great affection by women all over the world, where he was married three times, though his final love was Matilde Urrutia, the eventual love of his life, for whom he wrote The Captain’s Verses (Los Versos del Capitán) which were published anonymously in Italy in 1952 and not released under his own name until published in Chile in 1963.  Neruda’s home in Chile was also a seaside residence, where he identifies with the ocean because of the internal movements of the waves, becoming something that remains alive in the rhythm of his poems.  Surrounding himself with the vocabulary of his poems, “Her eyes were the color of faraway love,” he never accepts reality as it is, but expects us to relate to history in a creative way, to offer a better alternative.  Much of his life was spent in exile, yet as a poet he is a national hero in Chile (no one fills that position in America), where his poems give identity to a continent and to a country.
Posted by Robert Kennedy at 12:01 AM