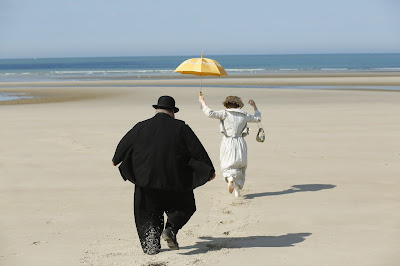 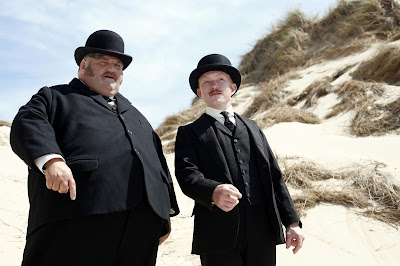 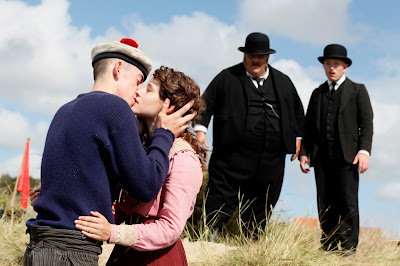 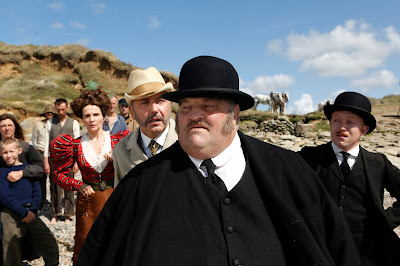 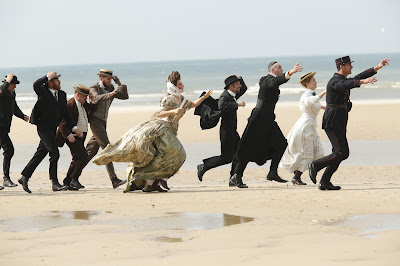 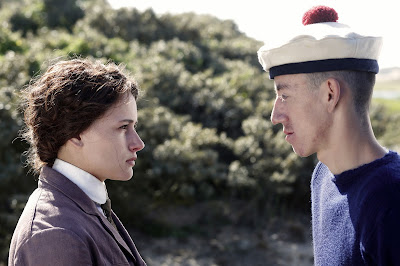 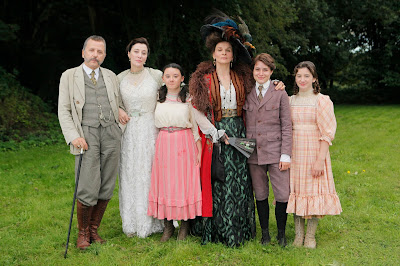 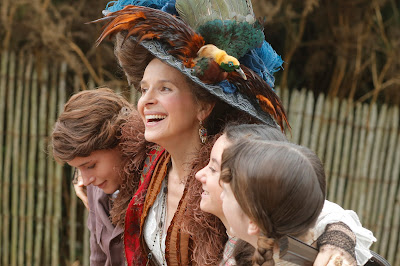 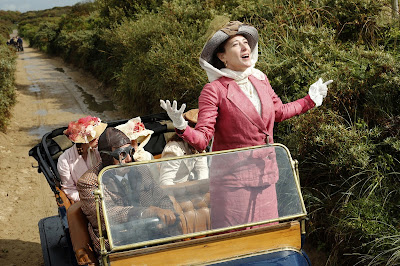 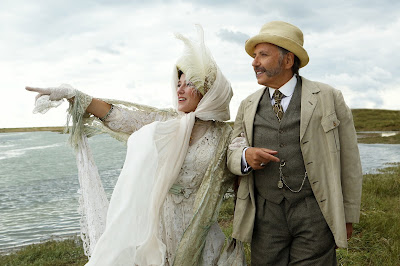 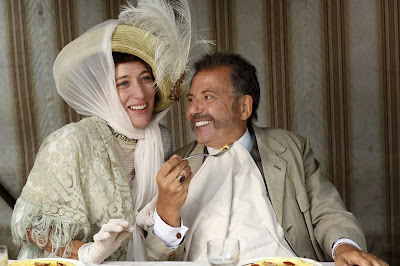 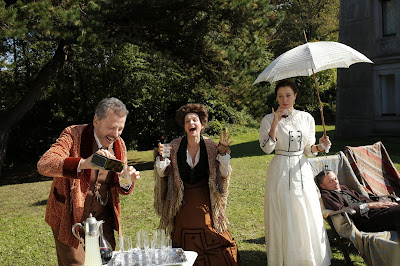 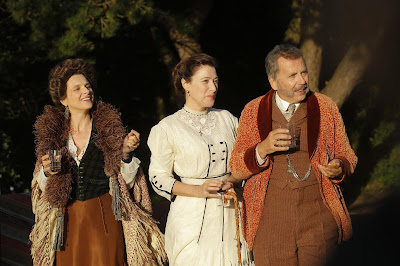 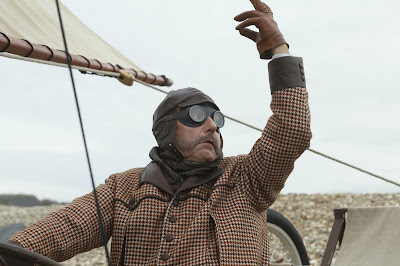 This is a film that will scramble your brains, leaving nothing but mush afterwards, a surreal remix of L'il Quinquin (P'tit Quinquin) – Made for TV (2015), where again people mysteriously disappear in a small seaside village on the coast of Northern France, while the befuddled and constantly inept police inspectors on the scene make no progress whatsoever in solving the crimes, yet this version is more over-the-top, as everything’s done to such horrific excess that bad taste is essentially the theme of the film.  Ironic, then, that what is arguably the worst film in the Dumont repertoire will have the most commercial success, as theaters, for no apparent reason, are willing to book this film as an outlandish, cutting edge comedy, and people are flocking to the theaters in droves.  Is there no accounting for bad taste?  Perhaps this, in itself, is a comment on the current state of arthouse cinema, where Dumont in the past was a Bressonian disciple, one of the most ardent masters of bleak and austere dramas, yet then somehow in mid-career he completely altered his style, as he now makes proletariat comedies, as if they are an essential component to modern life, using escapism as an alternative to the brutally harsh realities of his earlier films, like Flandres (2006), 2010 Top Ten Films of the Year: #5 Hadewijch, and Hors Satan (2011).  Dumont was known for his use of non-professional actors, but all that changed with Camille Claudel 1915 (2013), where actress Juliette Binoche’s understated performance was the centerpiece of the film, a punishingly uncomfortable historical drama.  You’d never know this is the same actress in this new film that features a collection of highly recognizable French actors, none more pretentiously overwrought than the forever swooning, high-pitched histrionics of Binoche, just one of the lunatics in the asylum of this exaggerated comic farce, an apparent revival of sorts to Buñuel’s THE DISCREET CHARM OF THE BOURGEOISIE (1972), a scathing attack on the hypocrisy of the middle class.  Honestly, this film, as written, may have been better served by the minimalist experimental filmmaker Guy Maddin, whose silent era homage and subversive humor is more in line with the ridiculous aspect of the material, where actors aren’t nearly as accentuated as the surrealist production values.

As is, the film is like an experiment gone wrong in a highbrow acting class, pushing actors well beyond the comfort zone, each making contact with the grotesque in bizarre and wildly grandiose performances, where each one has some sort of noticeable physical impairment or deformity that is played for effect, where humans become caricatures instead of real, as if playing in front of mirrors in order to amuse themselves for heightened pleasure.  Viewers may find this kind of shtick overly ridiculous, especially since it continues throughout the entire film, growing tiresome after a while, lacking the subversive wit of Monty Python style comedians who do this kind of thing for a living.  The French title, by the way, also the name of one of the lead characters, loosely translates to “my dick,” used to great effect in several of the overly raucous group scenes, causing near mayhem, but never resorting to pie-throwing incidents.  Set in the summer of 1910, the film is a comedy of manners, a satiric dissection of class structure, with the poorer class living along the seashore, having to collect oysters in the bay and scavenge for what the sea has brought in at low tide, led by a rugged seaman known as “The Eternal” (Thierry Lavieville), whose Keatenesque face is filled with world weary crevices, the patriarch of the Bréfort family that includes his hardened wife (Caroline Carbonnier), usually seen with a butcher’s knife in her hand, as she carves and cooks human flesh for her family, taking tourists out on boat rides and knocking them unconscious with the boat oars before serving them for dinner, also 18-year old Ma Loute (Brandon Lavieville), a seaman following in his father’s footsteps, recognizable by his gigantic ears, and three young ruffian brothers that seem to fight all the time.  Living high atop the hill overlooking the bay is the aristocratic Peteghem family, never seen doing a bit of work, with servants to prepare everything for them, including the overly anxious matriarch Isabelle (Valeria Bruni Tedeschi, sister of the former First Lady Carla Bruni), her nitwit husband André (Fabrice Luchini), who walks hunched over with a cane speaking utter nonsense, but smiling to everyone, as if in post-lobotomy mode, the wayward brother Christian (Jean-Luc Vincent), who seems demented, all supposedly creatures of a degenerate family history of incest and inbreeding that has wreaked havoc with their brains and genetic make up, with two near identical daughters in braids that are always dressed alike and never speak, but just make faces all the time.  Visiting her sister is the elegant and always glamorous Aude (Juliette Binoche), wearing a feathered boa and a shamelessly ostentatious, flowered hat, bringing along with her a young androgynous daughter Billie (Raph) with transgender tendencies, though she may simply be a punkish cross-dresser who enjoys altering her sexual identity.

Like a variation of the Montague’s and the Capulets, Ma Loute and Billie are romantically inclined from the first moment they lay eyes on each other, where their rhapsodic moments together require no words, just rapturous expressions on their faces, causing extreme consternation on the faces of their less than amused families, where each reviles the other.  The film is largely a slapstick choreography of human misfortune, where despite the comic overtures, Dumont continues along the same misanthropic path, exposing the worst side of human behavior, where humans are little more than carnivores feeding on one another, reduced to cannibalism to survive.  Deeply separated into a society of the haves and the have nots, the Bréfort family have become human ferries, carrying individuals in their arms, transporting them across the shallows in order to reach the other side, where it seems all but impossible that the haves would actually get their feet wet.  This silly ritual is repeated at least half a dozen times, and is how Ma Loute and Billie met in the first place, as he seemed to take great delight in hoisting her in his arms, while she viewed him as her great protector.  Adding to the comic absurdity is the highly illogical services of the town constable, Machin (Didier Desprès), an oversized gentleman wearing a dark suit and bowler hat, accompanied by a miniature version that follows him around, Malfoy (Cyril Rigaux), a sounding board that allows him to test his dubious theories, a Laurel and Hardy team where the two remain oblivious to what’s happening right under their noses.  With law and order firmly resting in their hands, perhaps it’s no surprise that all hell breaks loose, with the inflated looking Machin actually floating into the sky, with Malfoy keeping him tethered to a rope, or he would simply fly away.  Similarly, there are other levitation sequences, a preposterous and surreal response to the subtle use of this device in earlier Dumont films, like HUMANITÉ (1999), containing a brief, almost overlooked moment that represented a transcendence from earthly matters.   While the cinematography by Guillaume Deffontaines is superb, expressing a gorgeous array of brilliant colors on the northern Pas de Calais coastal region that are only brightened by the sunlight, the storyline is slight, to say the least, seemingly intent on grotesque physical comedy, where going for laughs and guffaws take the place of ideas.  The film is likely to be extremely divisive, in the love or hate category, with the French film magazine Cahiers du cinema naming it the 5th best film of 2016, though the crude humor may alienate many viewers, none more than when Ma Loute realizes he’s been conned, discovering Billie is a boy, where he savagely beats him, holding nothing back, becoming a sick comment on a brutal reality that is all too prevalent in society, as transgenders are often targets of abuse, known as Trans bashing, and to the actor’s credit, this androgynous identity was maintained throughout all Cannes public appearances.  Nonetheless, Billie is the heartbeat of the picture, where the malicious treatment leaves viewers feeling violated, where the lawless, anarchistic tinge of lunacy prevails, like an ill wind sweeping the landscape, supposedly wiping away all sins, yet the residue of moral rot remains.
Posted by Robert Kennedy at 12:00 AM