A Woman Is a Woman (Une femme est une femme) 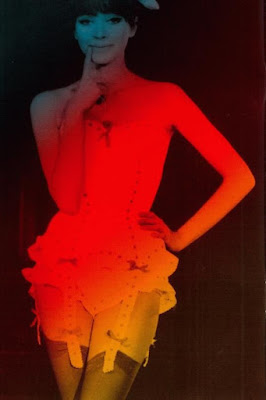 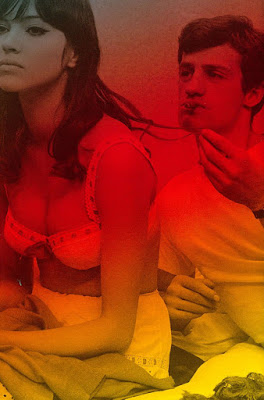 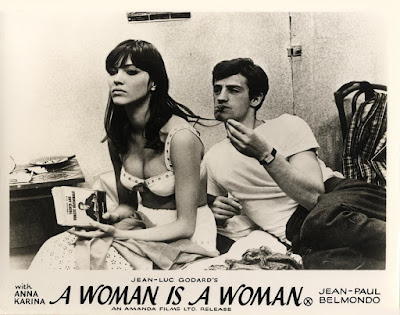 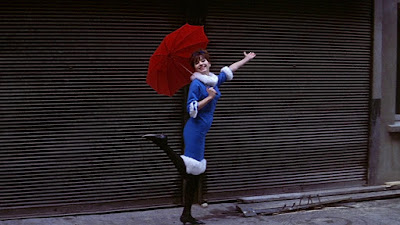 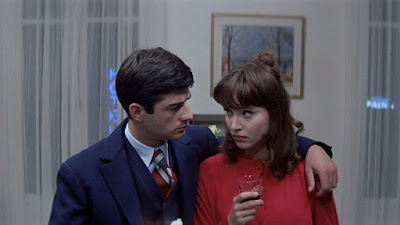 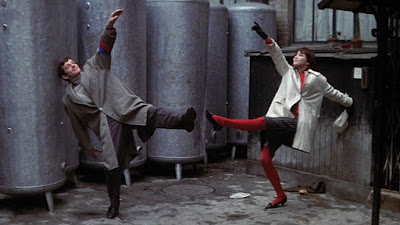 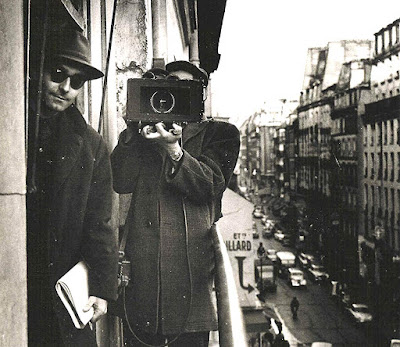 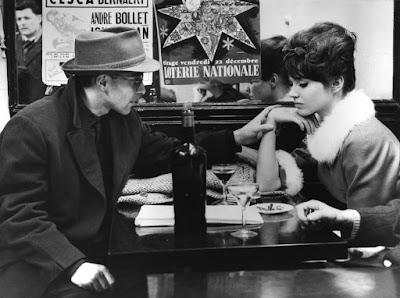 Godard on the set with Anna Karina 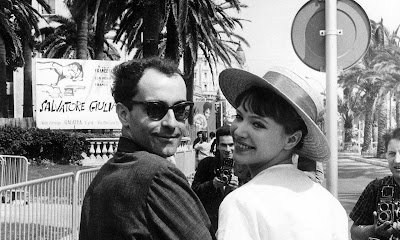 This is a film about aesthetics, creating a jumbled effect from a variety of cinematic techniques used throughout the history of cinema, seemingly having fun behind the camera, challenging the audience to play along, while also shooting a film about the female aesthetic.  His first film in a studio shot in just five weeks in late 1960 largely without a script, Godard was smitten by his lead actress, Anna Karina, marrying her shortly after finishing the shoot in March 1961, creating a short-termed cinematic love affair with her in front of the camera, making six of his most impressive early films together in the next five years, divorced in December 1964 when Godard began a more political/intellectual period of his life, losing interest in what he would later call his bourgeois phase.  Describing their marriage, she recalls “It was really a great love story, but very tiring in a way for a young girl because he would go away a lot.  He would say he was going to buy some cigarettes and he would come back three weeks later.”  Yet Godard will forever be associated with the films he made with Karina, like Masina with Fellini, Vitti with Antonioni, and Bergman with Rossellini, as they all reflect a partnership with an artist and his muse during a period many think is the most creative of their career.  Their relationship was a classic example of the male auteur constructing his personal film universe, where what he liked, apparently, was Karina’s pliability, where he could mold her into whatever he desired, which, when viewed today, includes a certain amount of sexist condescension.  Karina showed an awkwardness on the screen that he used as an asset by emphasizing her vulnerability, displaying a melancholy fragility that became her most distinguishing characteristic.  Godard’s work with Karina is the best of his repertoire, while Karina’s work with most other directors is merely ordinary, with Rivette’s LA RELIGIEUSE (1966) and Fassbinder’s Chinese Roulette (Chinesisches Roulette) (1976) being the exceptions.  His third film in fourteen months, though his second, LE PETIT SOLDAT (his first film working with Karina), was banned in France due to the controversial subject matter of a French draft dodger during the Algerian War and not released until two years afterwards, Godard was surprised by the outburst of popularity that met his initial work Breathless (À Bout de Souffle) (1960) and was completely caught off-guard, having spent a decade working as an outsider offering critical analysis of films for the prestigious film magazine Cahiers du Cinéma.  This is basically a cheesy love story reflected through an endless relationship squabble, a battle of the sexes between lovers Angela, Anna Karina, and by extension all women (forced to deal with an immovable trait of male stubbornness), and Émile (Jean-Claude Brialy), largely improvised yet expressed in the satiric manner of a neo-realist musical, with garish costumes, brilliant colors, and a breezy musical score from Michel Legrand.  More of a tribute to the American musical, Godard subverts the audience’s expectations, leading up to but never breaking out into song and dance, then cutting off the sound completely for brief periods of time, where the effect is intentionally jarring, especially during street scenes with the bustling sounds of traffic and street noises, but also during the performance of Karina’s lone song, where the rousing cabaret music plays up to the moment that she sings, but then stops, so her song is completely unaccompanied by music, picking up again the moment she’s finished, creating a curious moment of intimacy that is stylistically unique.  What’s undeniable is the playful manner that exists throughout, often overlooked, yet easily the most lightweight comedy in the Godard repertoire.  (Nobody dies).

Winner of the best actress award at the Berlin Film Festival, Karina works with two French superstars at the peak of their popularity, including Jean-Claude Brialy as her boyfriend, sharing a dingy flat together, and Jean-Paul Belmondo as his friend Alfred Lubitsch (a variation on the small talk from the 30’s screwball comedies of Ernst Lubitsch, The Cinema of Ernst Lubitsch: The Lubitsch Touch, in particular DESIGN FOR LIVING, 1933), a friend who is also in love with Angela, making this a friendly ménage à trois, where there’s surprisingly little jealousy between the rival men.  When Angela announces out of the blue that she wants to get pregnant (Karina actually became pregnant during the shoot, but had a miscarriage), there is a running argument that lasts throughout the film, with Émile preferring to wait, suggesting they have plenty of time, while she insists he’s not taking her seriously.  There’s an interesting stand-off between them, as the camera follows each standing to one side of the room with their thoughts projected onscreen, moving back and forth between them.  Similarly, when they have arguments that extend past bedtime, they insist upon not speaking, so after they turn out the lights, they can be seen carrying a stand-up lamp to the bookshelves, each choosing various books, then getting back into bed where they wordlessly continue their argument by displaying book titles.  Turning instead to best friend Alfred, early on Angela announces that she wants to be in a musical with Cyd Charisse and Gene Kelly, with choreography by Bob Fosse, while the two of them strike poses in colorful costumes along an otherwise rundown section of Paris.  While it’s clear that the era of the grandiose 50’s musicals are over, this is nonetheless a nostalgic tribute, complete with red, white, and blue color schemes from the French flag and lush Cinemascope color compositions.  Curiously, the lavishly colorful musical productions of Jacques Demy had not yet been made, like The Umbrellas of Cherbourg (Les Parapluies de Cher... (1964) and The Young Girls of Rochefort (Les demoiselles de Rochefort) (1967), both of which hold up better to the test of time than this Godard miniature, which simply doesn’t age as well, accentuated throughout with a kind of modernist pop art, but it is an example of Godard making a musical.  “But the film is not a musical,” according to the director, “It’s the idea of a musical.”  While there are certainly plenty of moments of tediousness and trivialities in this film, feeling overly superficial, where there’s really not much of a storyline, with Émile actually asking people on the street if they’d like to father Angela’s child, while also reduced to making inside jokes, including Jeanne Moreau in a brief aside about working on JULES AND JIM, which wasn’t even made yet, released the following year, or Belmondo making a comic reference to wanting to watch Breathless (À Bout de Souffle) on TV, yet there’s a quizzical nature to it all, at times audaciously speaking directly to the audience, even questioning the meaning of the film itself, with Émile perhaps overstating the case, “Is this a tragedy or a comedy?  Either way it’s a masterpiece.”

The only song that plays in its entirety is a Charles Aznavour song played on a jukebox by a sad and distraught Angela, Aznavour 1962 Tu t'laisses aller - YouTube (3:29), a torch song about the regrets of marriage, how people let themselves go, no longer that charming face that was once so easy to fall in love with.  Basically a study of her fluctuating moods, beautifully shot by Raoul Coutard, where adding to the colorful allure is Angela’s profession of a striptease dancer in the seedy Zodiac Club, which looks more like a restaurant than a nightclub, with female performers interacting with an all-but-absent clientele, creating a strange feeling of emptiness, personified by the song Angela sings in this setting, which lyrically is a brazenly sensual female manifesto, yet quietly reflects more than anything else a deep feeling of personal loneliness.  According to Godard, “Life and the unreal are inseparable.  If you begin with life, you find unreality behind it, and vice versa…the imaginary and the real are firmly separated and yet both are one, like the Moebius curve which has at the same time both sides and one side.”  While the camera essentially follows Karina throughout the streets of Paris, stopping in shops and happily greeting people, and is mostly a valentine to her screen image, with the camera adoring her throughout, yet she becomes the subject of the film itself, which in effect is a documentary on the actress at work as a one-of-a-kind performer, with both Karina and the city of Paris becoming the feature characters of the film.  In contrast with the marked artificiality of the film, Godard uses a verité style along the heavily populated streets, using direct sound, capturing faces of aging French men and women ogling for the camera, readily identifiable as the keepers of the flame, representative of the working class, emblematic of a patriotic phrase Angela repeats from the national anthem, La Marsellaise, “the day of glory has arrived.”  Yet the film takes place in the wintry chill of a cold and grey Parisian present heavily populated by outsiders and prostitutes, where, if anything, his three characters stand for lost dreamers whose time has finally come.  There’s an intriguing scene when Alfred tells Angela that he loves her, yet she doesn’t believe him, asking him to demonstrate by telling her a lie, then following that with a true statement, where she doesn’t recognize the difference, as both were uttered with the exact same facial expression.  This begs the question, how do you know when somebody is telling the truth?  While this doesn’t concern Alfred, claiming he knows he’s telling the truth, yet Angela isn’t convinced, suggesting everyone is out for themselves.  What this highlights is her own developing distrust, revealing her own sense of inner solitude.  This concept that another person’s feelings can’t be recognized, that they remain inaccessible, is a clue to understanding the director’s own unique feelings of loneliness, where he is sometimes perceived as indifferent or even hostile, which may explain his preference for isolation and not being disturbed.  Yet this existential void that we are all alone in this world is the underside to all the bright and cheery expressiveness that pervades throughout this film.
Posted by Robert Kennedy at 12:00 AM