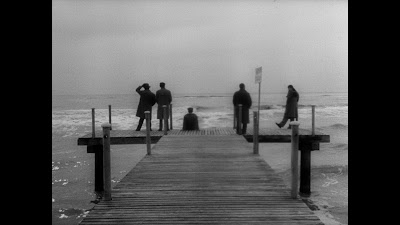 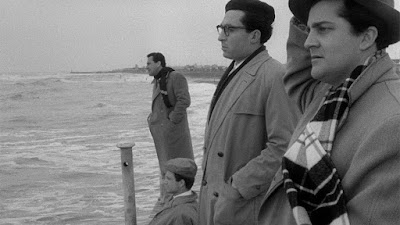 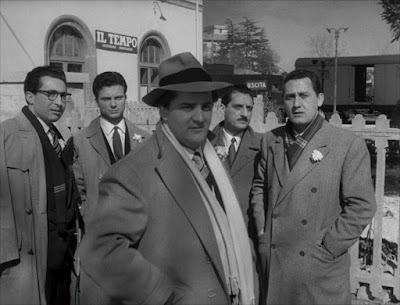 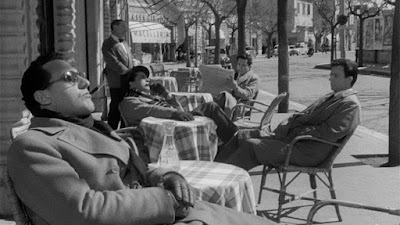 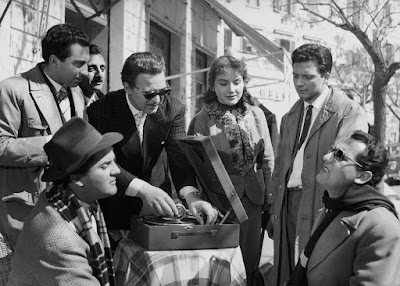 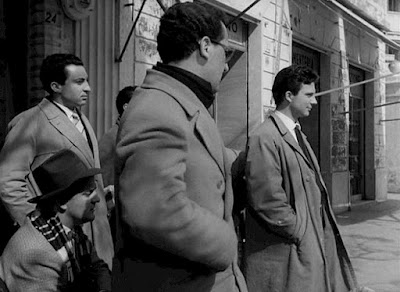 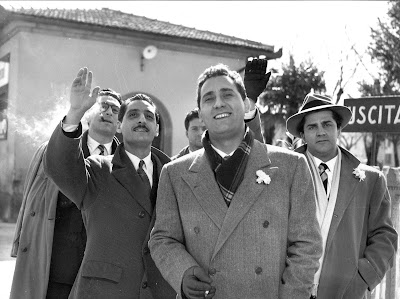 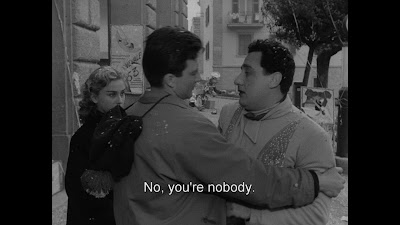 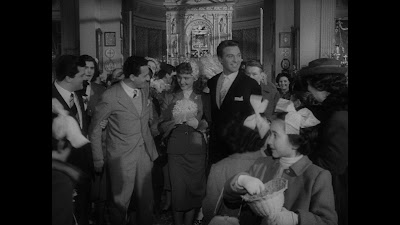 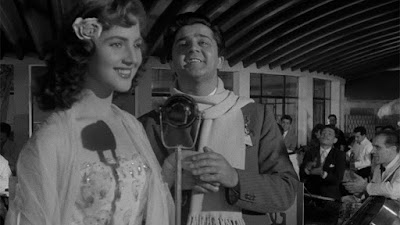 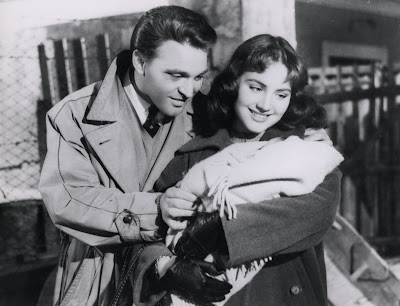 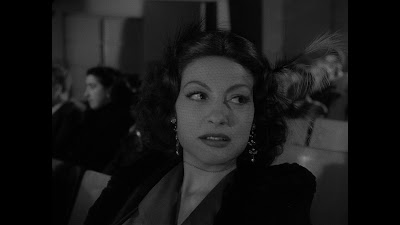 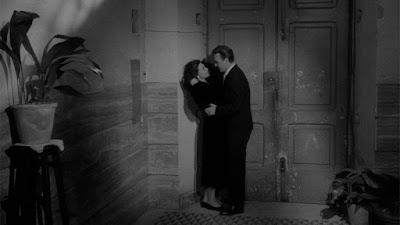 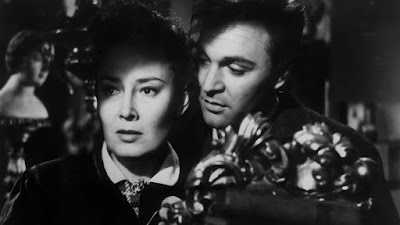 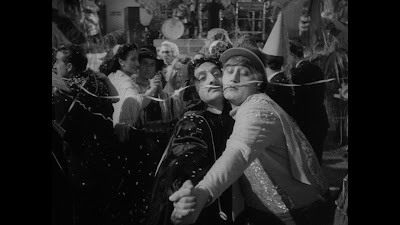 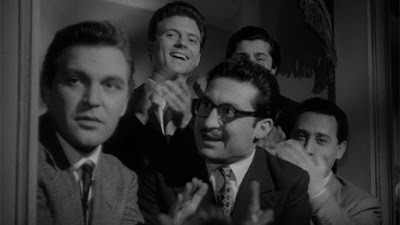 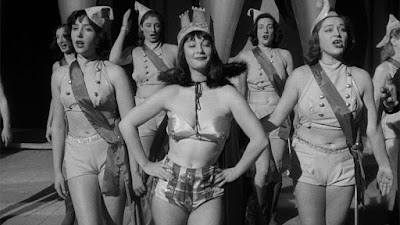 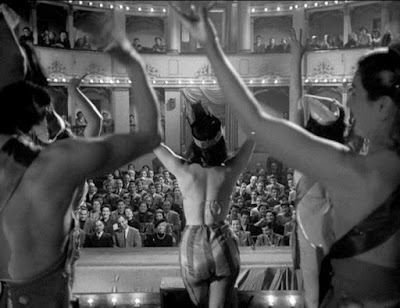 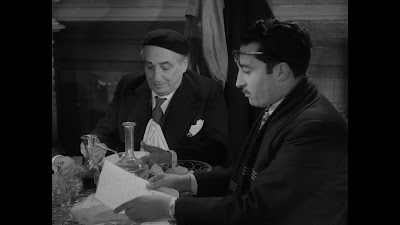 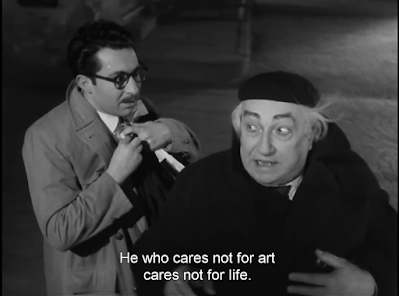 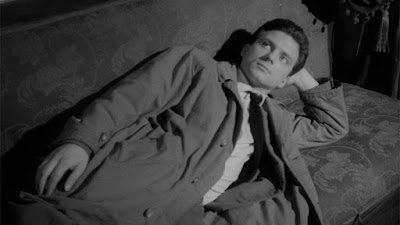 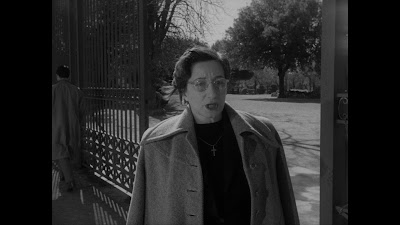 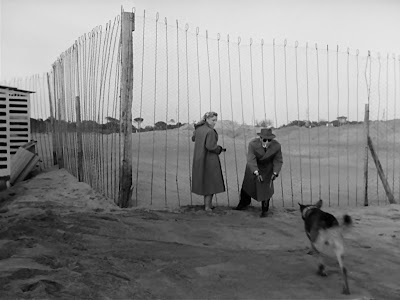 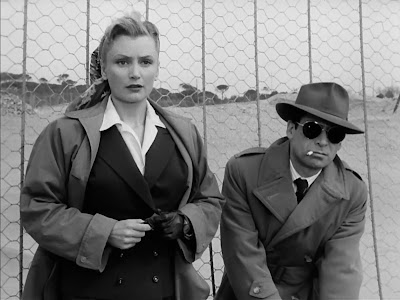 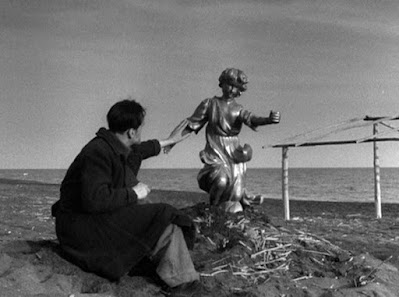 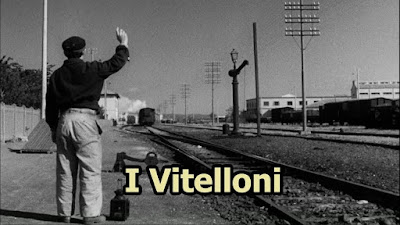 We all talked about leaving, but only one of us, one morning, without a word to a soul, actually left.           —Narrator (Riccardo Cucciolla)

Born in the coastal town of Rimini, Fellini recreates his own autobiographical childhood in a provincial town that has a summer high season overrun by tourists and is pretty much empty for the rest of the year, creating a coming-of-age film with five unemployed layabouts, a group of five young men on the cusp of adulthood, but still adolescents with nothing to do, who feel their lives are wasting away in this tiny town where nothing of any significance ever happens.  Winner of the Silver Lion Award at the Venice Film Festival, a prize shared by six films, as the Jury issued no Golden Lion, nominated for a Best Original Screenplay when released in the U.S. in 1958, becoming Fellini’s first film to attract attention abroad, reportedly said to be Stanley Kubrick’s favorite movie, always listed near the top of his list, Kubrick's Favorite Films – Movies List on MUBI, drawing comparisons to George Lucas in American Grafitti (1973), Richard Linklater’s SLACKER (1990) or Dazed and Confused (1993), Noah Baumbach’s Kicking and Screaming (1995), Hou Hsiao-hsien’s THE BOYS FROM FENGKUEI (1983), a remarkable story of the director’s own awkwardly troubled adolescence, and Martin Scorsese who used the film as a model for Mean Streets (1973), using a voiceover narration actually spoken by director Martin Scorsese, a technique he saw used by Fellini in this film, while the way Fausto introduces his friends in the opening scene of the film mirrors the way Henry Hill presents the neighborhood gangsters in Goodfellas (1990), while a female version of the restless youth story exists in Chabrol’s Les Bonnes Femmes (1960), and one might have to include Seinfeld (1989 – 98), a colossally successful television comedy that operates on a premise that nothing ever happens.  Accentuating the illusory dreams of five young men in the provinces, where success in the big city is a distant mirage, with no clear direction in life but seem stuck in limbo in a backwater town where their dreams simply die from disuse, the vitelloni are Fausto (Franco Fabrizi), the local Don Giovanni, flirtatiously eying every young woman he meets, impregnating Sandra, (Leonora Ruffo), forced by his family into marriage, but his leering eye continually wanders, always making excuses for himself, Moraldo (Franco Interlenghi), easily the most level-headed, perhaps the conscience of the group, also Sandra’s brother, Alberto (Alberto Sordi), the perpetual child, a mama’s boy expressing gay flamboyance, dressing in drag in an elongated party sequence, Leopoldo (Leopoldo Trieste), an aspiring playwright and the intellectual of the group, but feels perpetually misunderstood and unappreciated, living a life of endless sadness, growing to despise himself and his work, and Riccardo (Riccardo Fellini, Federico’s brother, bearing a surprising resemblance), an aspiring singer who is the least developed character of the group.  Unwilling to face the grim postwar future with few economic prospects, each seems to harbor a secret dream, yet feels stuck in a state of adolescent paralysis, as if extending their childhood for as long as possible.  Never fitting neatly into Neorealism, Fellini avoids showcasing pressing social problems like unemployment or the postwar recovery, instead delving into the interior lives of his characters, caught up in a highly personalized style that accentuates illusions and fantasy, laced with biting comic sarcasm, creating a frenetic, near delirious pace that seems to define the Felliniesque state of mind, accompanied by equally compelling, stream-of-conscious music by the incomparable Nina Rota.

Opening in the carnivalesque absurdity of the Miss Mermaid beauty pageant, Sandra is the surprise winner, winning instant acclaim that fades away just as quickly, as rumor has it she’s expecting a child, with all the hoopla feeling more like a wish-fulfillment daydream than reality.  While all the characters are flawed, perhaps none are as overtly damaged as Fausto’s out of control narcissism, impregnating Sandra, and is then seen packing his bags to cowardly head out of town, avoiding responsibilities, but his father (Jean Brochard) quickly puts a stop to that, forcing a shotgun wedding where Fausto, having no income of his own, is forced to live under the roof of his bride’s father after honeymooning in Rome.  What all five men have in common is a continual habit of sponging off their families, who have little in reserve, as the postwar economic reality in Italy was particularly grim, so anyone who had a job was tapped into by friends and family, allowing these guys to idly spend their time in pool halls, outdoor café’s, or just strolling along the seaside biding their time, philosophizing about their non-existent futures, whining about their dead-end lives, offering a glimpse of what the French New Wave would aspire to a decade later, accentuating the existential poetry of “trembling” youth, like Godard’s Band of Outsiders (Bande à Part) (1964), capturing youthful indifference with melancholic overtones, yet in each film the lighthearted, playful exuberance has enchanted movie audiences for decades.  While we get a glimpse of each one’s home life, Fausto, arguably the most unlikable due to his constant chicanery, seems to be the center of attention, where every time we see him he’s trying to seduce another woman.  His father-in-law tries to set him straight, finding him a respectable job as a stockboy in a religious curio shop, which keeps him out of trouble for a while, but he loses his job trying to seduce the owner’s wife (Czech actress Lida Baarová, who was once romantically linked with Joseph Goebbels and subsequently charged with treason and espionage, but never proven, released after 18 months in confinement), the bookish keeper of records who rebuffs his advances.  Unfortunately, Sandra falls for his line that the wife came on to him, admittedly putting her husband in a better light, though she’s thoroughly aware of his pattern of blatant infidelity, breaking into tears whenever she finds out.  Perhaps his worst indiscretion is sitting in a movie theater with his wife on his arm, yet Fausto’s interest is the attractive woman (Arlette Sauvage) sitting in the adjacent seat, following her premature exit to her nearby home where he tries to entice her, but she’s having none of it, meeting his wife afterwards who’s alone waiting in front of the theater after all the patrons have left.  Clearly he cheats on her every chance he gets, despite the effect this has on his wife, with other women in town treating her with contemptuous disrespect as well, while Moraldo watches from afar and covers up for him.  The saddest part is that these serial acts of carnal indiscretions bring him no happiness whatsoever, growing easily bored, as it’s simply a reflex action that he continually returns to without thinking, where his constant disappointment may be at the heart of the overall existential malaise contaminating their town, each one lost in their own existential loneliness.

The scene of the film is an uninterrupted party sequence, part of the winter Carnival, a lavish masquerade ball which is an excuse for inebriated carousing and for Alberto to ostentatiously dress in drag, performing a surrealistic dance across the ballroom floor with an oversized carnival head made of papier-mâché that he holds on a string, where the frivolity and community spirit come alive, viewed as spontaneous mayhem, becoming the most visually exotic sequence of the film, featuring harsh camera lighting and garish imagery, where Nina Rota’s circus-like orchestration captures the overall delirium of this extravaganza event, mixing bouncy melodies with a comic tone, quickly reshaping the soundtrack with sudden mood shifts.  It’s a mesmerizing, yet out of control sequence that delivers what we come to expect from Fellini, as it’s truly a spectacle of flesh and humanity on parade.  Moraldo is the group’s quiet center, observing but rarely commenting, still something of a dreamer who stays up all night pacing the empty streets imagining a life anywhere else, feeling trapped by the environment, best expressed by the solitude of a deserted piazza at nighttime, befriending a young boy (Guido Martufi) who’s up at 3 am to go to work at the railroad station, an unlikely companion, seemingly content with his life, a reminder of his own lost innocence, where hard work and dedication stand out, like a voice of reason, representative of future generations.  Leopoldo grows ecstatic when a legendary actor comes to town, Signor Natali (Achille Majeroni), providing an opportunity for someone in the business to evaluate his work, meeting up with him after a stage show, reading him one of his plays, even over dinner, creating this air of confusion where Leopoldo eagerly awaits every word that Natali nonchalantly offers, taking it as the gospel, yet Natali feigns interest, as his real inclination is to lure him to the pier, having prurient interests in mind, scaring off the budding playwright, leaving him horrified and disillusioned.  But the larger story is the collection of scantily clad dancing girls who highlight the show, setting Fausto into action once again, this time with an all-too willing subject who enjoys the attention.  But when Fausto returns home in the wee hours of the morning smelling of sex, Sandra refuses him anywhere near her or the baby, rising at dawn and leaving, where there is no sign of her afterwards, leaving Fausto frightened and alone, thinking he may have lost her.  Checking all the usual places, she has simply disappeared, exposing Fausto as a lecherous liar and fraud, undeserving of her.  But they find her at his father’s house, pulling off his belt and giving his son a thorough thrashing until Sandra intervenes, ever-forgiving, agreeing to take him back.  Watching his friend play ping pong with his sister’s feelings leaves Moraldo disgusted and alone, the moral center and alter-ego of the director, the predecessor of Marcello Rubini, the journalist from the provinces who becomes the famous protagonist in LA DOLCE VITA (1960), having lost connection to this town, finally getting the courage to leave, arising early while everyone else is asleep (a swooping camera finds each and every one), abandoning the superficial illusions that have trapped the other protagonists while heading for the capital city of Rome, much as Fellini did at the age of 19, seen off only by his nocturnal friend who waves goodbye as the train leaves the station, seen walking the rails afterwards, relaxed and at ease, seemingly in balance with the world around him.