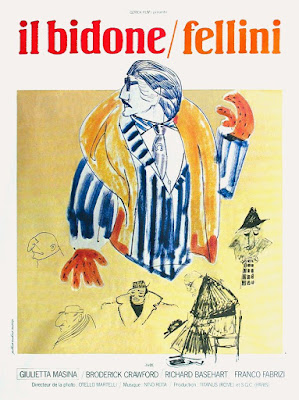 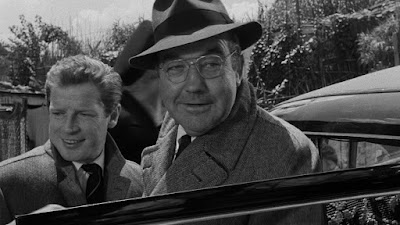 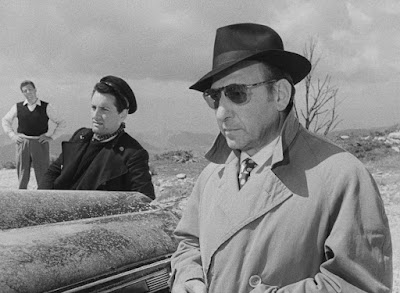 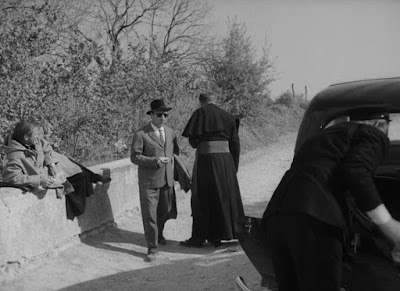 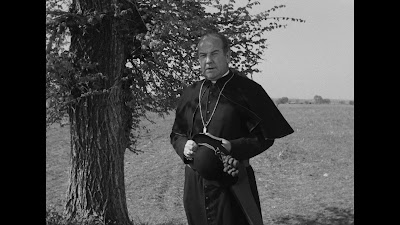 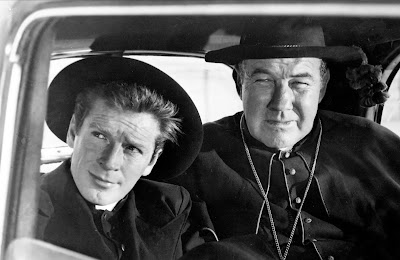 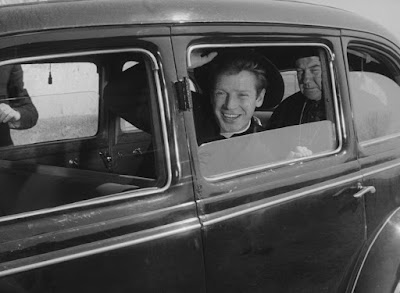 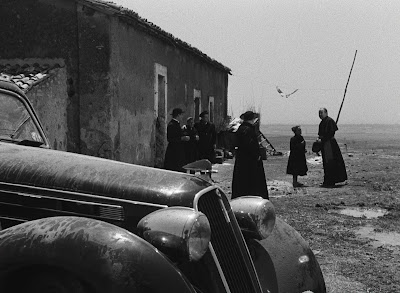 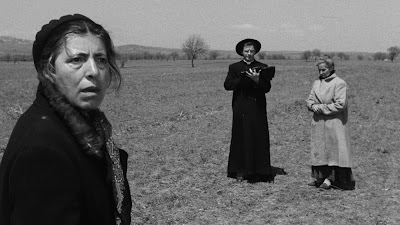 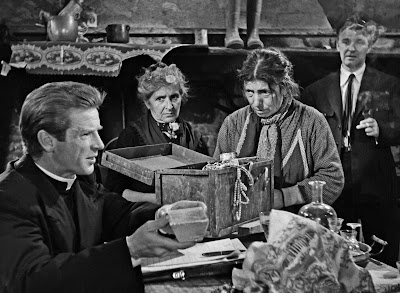 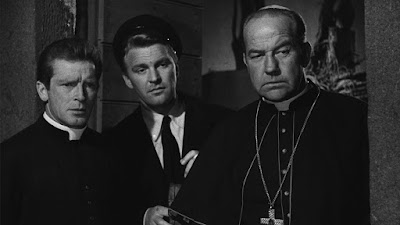 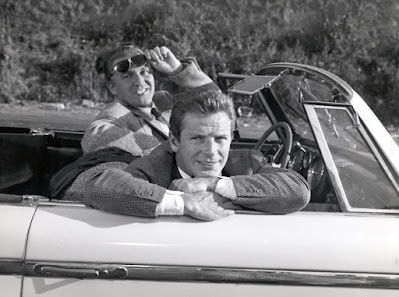 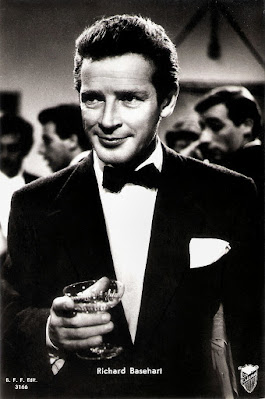 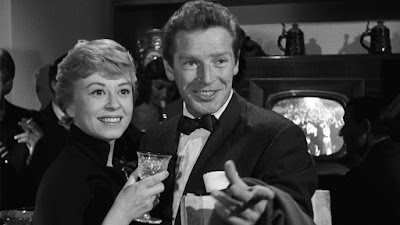 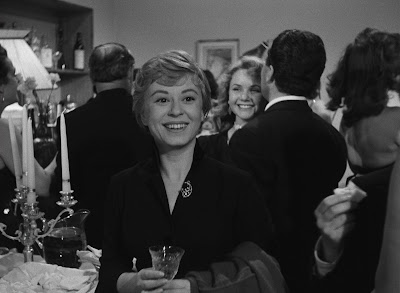 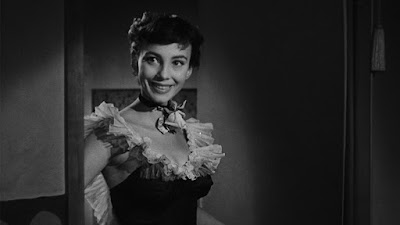 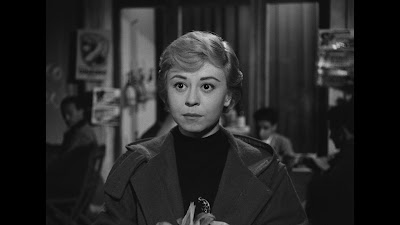 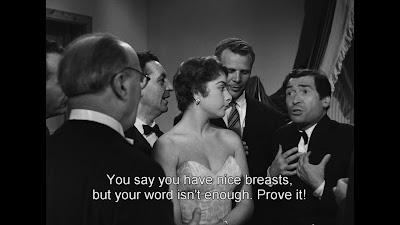 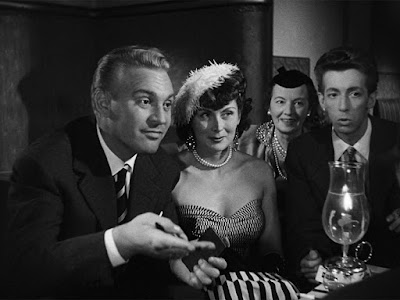 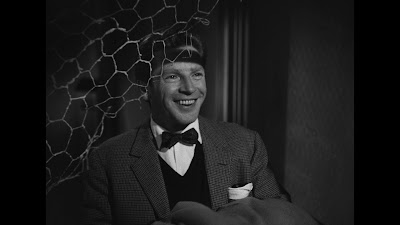 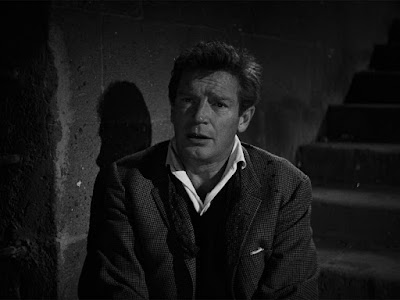 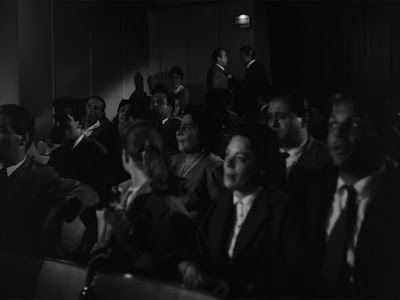 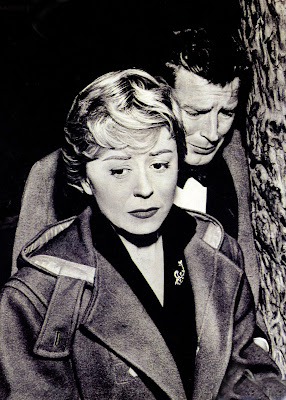 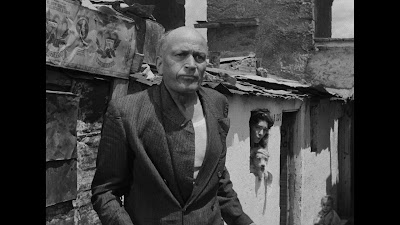 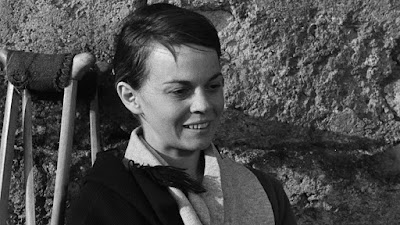 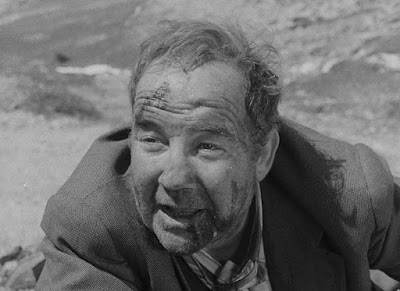 Fellini was born in Rimini, a small town on the Adriatic coast, one of the most notable seaside resorts in Europe with a long, sandy beach, known for attracting wealthy tourists who would swarm to the Grand Hotel and other beach establishments during tourist season and then disappear, leaving behind an empty provincial village that was forced to adjust to frenetic activity during the tourist season and endless boredom afterward.  This town produced a near-inexhaustible supply of memories and movie ideas for the director, recreating his home town in I Vitelloni (1953) and AMARCORD (1973), yet also figuring prominently in his characterization of loners leaving the distant provincial life for the lure of Rome in LA DOLCE VITA (1960) and ROMA (1972).  When Fellini and his family moved to Rome in 1939, he began a career as a magazine humorist and cartoonist, falling into a crowd of actors where he met first actor Aldo Fabrizi and then director Roberto Rossellini, writing a few movie scripts during the war before collaborating on the screenplay for ROME, OPEN CITY (1945), then working on multiple postwar scripts for Italian cinema, including several more Rossellini films, featuring on-location shooting, which may have been Fellini’s first work behind the camera while also announcing the birth of Italian Neorealism, which his early career would embody, favoring real locations, natural lighting, non-professional actors, while making a serious attempt to confront contemporary social issues.  By the time he made his first film VARIETY LIGHTS (1950), he had already written about twenty scripts, but the film was not a critical success.  However, it did provide many of the familiar cinematic Fellini traits we associate with his later films, including deserted piazzas at night, frenetic nocturnal party activity, along with a parade of chiseled faces offering utterly distinctive looks.  It was in his second film, THE WHITE SHEIK (1952), that he began his lifelong partnership with Nina Rota, his consummate musical composer who would forever be associated with Fellini films, providing an integral aspect of his cinematic aesthetic.  Despite their negative reception, these earlier films offer a window into the director’s comic imagination and are more greatly appreciated today.  Fame and recognition would come with his third film, I Vitelloni (1953), set in his home town of Rimini, sharing the Silver Lion Award at the Venice Film Festival with six films, as the Jury issued no Golden Lion, becoming Fellini’s first film to attract attention abroad.  This early trilogy of character films stumped Italian film critics, as they don’t fit neatly into Neorealism, as Fellini was less interested in identifying pressing social problems like unemployment or the postwar recovery, and more interested in the interior lives of his provincial characters, caught up in a highly personalized style that accentuates the illusions and fantasy which serve as protective defense mechanisms from having to face the inevitable grim future.

Two of Fellini’s next three films are among his best, a trilogy of solitude, salvation, and grace, with LA STRADA (1954) and NIGHTS OF CABIRIA (1957), which is arguably his very best with Giuletta Masina at her finest, both winning the Oscar for Best Foreign Film, which bookend this somewhat obscure effort that has all the Fellini elements, another road movie beginning and ending on the road that turns into a grim and downbeat allegory of a lost Italian society, happening just 10 years after the fall of Mussolini with the Church offering full support to the fascists, identifying a pervasive moral vacuum that features a beleaguered expression of restless desperation, capturing a belated revelation of the soul, entrenched with the bleak realism of poverty and an accompanying poverty of the spirit, having the distinction of being the last Fellini film made in a realist tradition.  What immediately stands out is the speed of the dialogue, where the mouths of two American actors onscreen don’t match the language being spoken, where it’s terribly out of sync, largely due to Fellini’s practice of dubbing the dialogue in the studio afterwards.  Borrowing the American gangster film genre as a model, this film was such a disaster at the Venice Film Festival that Fellini would not return again until more than a decade later with SATYRICON in 1969, though the film was listed at #7 Best Films of 1956 at the French Cahiers du Cinéma (Cahiers du Cinema: 1951-2011).  This psychological drama features a trio of con men from Rome headed by the aging leader Augusto (American actor Broderick Crawford, though the director originally had an aging Humphrey Bogart in mind, but he was too ill from cancer), a would-be mediocre painter named Picasso (fellow American Richard Baseheart), and Roberto (Franco Fabrizi) a bleach-blond glamor boy who wants to be a popular singer “like Johnny Ray,” as they target poor farmers out in the countrysides, swindling them out of their savings by pretending to be priests sent by “His Eminence in Rome.”  Conjuring up a pathetic scam used for years, they pretend that sometime during the war a buried treasure filled with priceless jewels (all junk) was buried on their property with an anonymous dead man whose body they need to rebury, claiming the treasure is theirs so long as they pay them the required fee for holy prayers spoken at the Vatican.  Jubilant afterwards, they celebrate at a spiffy nightclub, spreading their money around like high rollers, trying to impress the show girls who do voluptuous dance moves, also featuring the act of a black tap dancer on roller skates.  Their next target is a housing scam in the poorest urban section, posing as advance men for the Housing Department, signing phony contracts and taking deposits for homes that don’t exist, swearing they can take occupancy in the next week, causing a hysterical street mob of people trying to hand over their money.  Flush with cash afterwards, they run into an old con artist pal just out of jail, Rinaldo (Alberto D. Amicis), who’s apparently hit a big score, so expert in his craft that he’s described as “If you shake his hand, make sure you count your fingers,” driving a snazzy convertible with a gorgeous girl (Xenia Valderi) in the front seat, inviting them all over to his home for an evening’s New Year’s Eve party, which turns into one of those signature sequences that features all the elements of spectacle that Fellini has become famous for, cramped space, bodies and faces jammed into every ounce of camera space, voluptuous women, men devising ways to undress them, telling a young beauty queen (Irene Cefaro who actually won the Miss Roma beauty pageant in 1952) that she must expose her breasts if she expects to win any contests.  Stripping completely naked, the party host steals away into a back room seducing the beauty queen, caught in the act by his partner, who he then has to placate with promises he knows he can’t keep.  The night is an exaggerated festivity filled with dancers and midnight madness, including champagne revelry, sparklers, and fireworks.

Augusto is duly ignored at the party, trying to enlist Rinaldo in one of his harebrained, can’t-miss schemes, but his small-time operations simply aren’t worth the host’s time, as he lacks Rinaldo’s easy charm and finesse, which only exposes how old he feels, unable to change with the times, revealing the pathetic nature of his old-fashioned con game that he’s been playing for years, stuck near the bottom of the criminal food chain, never really amounting to anything.  Roberto takes the euphoric edge off the night, caught pickpocketing a woman’s gold cigarette case by the host who demands that he return it, humiliated and exposed as a small-time thief.  Picasso is equally as pathetic, bringing one of his paintings for an appraisal, but it’s his wife Iris (Giulietta Masina) who finally sees the light, as he’s not the traveling salesman she thought he was, but a partner in a criminal enterprise.  Augusto leaves the party alone, disgusted with himself, embarrassed that he’s such a small-time crook, seen crossing a piazza alone in the dim of morning, accosted by a couple working girls, and he’s still walking when he runs into his daughter Patrizia (Lorella De Luca) that he hasn’t seen in two years in the morning crowd.  Just finishing high school, her innocence is in stark contrast to anyone else appearing in the film, altering the tone, changing the focus, with Augusto turning over a new leaf, trying to be a responsible father, promising to come up with the 300,000 lira needed to go to college, as she wants to be a teacher.  But this happy reunion turns on a dime, as Augusto is recognized by a movie theater patron, a victim of one of his swindles, immediately calling for the police, making an ugly public spectacle that simply devastates his daughter, who can’t believe what she sees.   After spending a stint in jail, he’s back to his same lame priest routine with a new team, scamming poor farmers out of their cash, but this one has a crippled daughter Susanna (Sue Ellen Blake) with infantile paralysis from polio, with her mother asking the priest to say a prayer for her, hoping, perhaps, for a miracle.  Yet when the daughter describes her life, she believes she has everything, “I live like a queen,” yet worries she’s a burden to her family, taking Augusto by surprise, displaying a positive spirit with a selfless maturity while quickly taking a melodramatic turn into sentimentality and pathos.  When faced with such saintliness, perhaps reminding him of his own daughter, he runs away, but he’s rocked by the experience, left adrift in an endlessly hopeless moral quagmire, with signs of a growing conscience.  When they divvy up the money on the road afterwards, Augusto claims he doesn’t have it, that after hearing the girl’s wretched tale, he refused to take it.  Of course, none of his partners believe him.  “Can’t I have a conscious?”  “Not you,” is the consensus, as they’re on him like jackals, quickly searching his pockets, but he runs away, first down a hill, then over a steep cliff edge, so they throw rocks at him, one hitting him directly on the head, knocking him down, laying helpless on the ground.  They all come by to kick him some more, finding the money hidden in his shoe, infuriated that he would pull such a shameless act, refusing to work with him again or offer help, basically leaving him for dead.  He spends the night unable to move, where the parallel to the paralyzed girl is unmistakable.  By morning he tries to crawl up the cliff, hearing voices on the road, seeing a bunch of kids pass by, pleading silently, as if in his head, as he hasn’t the strength to utter a sound, but they pass him by, leaving him alone to perish on the side of the road.