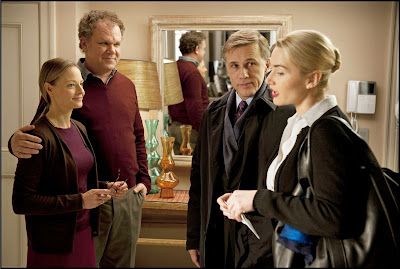 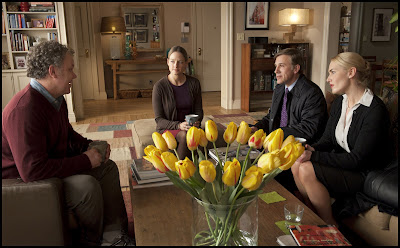 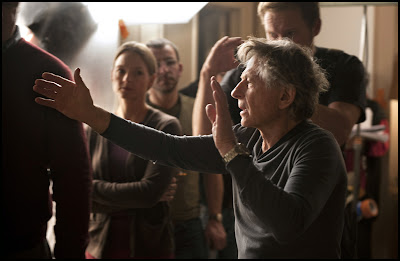 
While Polanski’s hilariously frenetic trailer, sarcastically set to the same music as Kubrick’s A Clockwork Orange (1971), Rossini's “Thieving Magpie,” Carnage Trailer 2011 HD - YouTube (2:02), is one of the best seen over the Christmas holiday season, the same cannot be said about the film, which is smartly written and fun but also occasionally flat, based on Yasmina Reza’s play, God of Carnage (initially written in French), which focuses on two sets of wealthy New York City parents who attempt to resolve an incident between their children who get into a minor scuffle.  What starts out as a polite and civilized conversation soon takes a turn for the worse, where fingers are pointed, pastries get eaten, cell phone’s rudely interrupt, alcohol is consumed, and in no time the behavior gets out of hand, turning this into a madcap farce about privilege, power, and social class, where society no longer plays by the “rules of the game,” instead playing the blame game where it’s somebody else’s fault, anyone other than their own. This kind of overprotection is typical of children of privilege, raised by nannies, where often chauffeured limos may drop off the child to and from school, where the parents remain clueless as to who their children really are and what personality characteristics they exhibit, as they’re completely obsessed with providing the finest schools, planning their college and career path before they even get into pre-school.  With this in mind, Polanski has set into motion a whirlwind of emotional carnage, each side inflicting as much damage while also exhibiting as much human contempt as possible, all while attempting to remain above the fray.  But both sides are dragged into the mud, resorting to what amounts to verbal jousting, using vindictive elements of slapstick humor to render each side ridiculously inept.  Except for the opening and closing shot, a held look at the Brooklyn Bridge Park in New York City (the scene of the crime) overlooking the Hudson River where children play, parents walk by with strollers, old folks sit on benches, and people walk their dogs, the entire film takes place within the four walls of an upscale New York condominium, the home of Penelope and Michael (Jodie Foster and John C. Reilly), whose 11-year old son was hit in the face with a stick by Zachary (Polanski’s son Elvis), the child of Nancy and Alan (Kate Winslet and Christoph Waltz).


This kind of chamber drama is all about casting, as these four remain front and center in real time before an audience the entire time, where the original Broadway cast was Marcia Gay Harden and James Gandolfini as Penelope and Michael, while Hope Davis  and Jeff Daniels played Nancy and Alan, though at times the two men switched their roles.  The conflicting personalities is what generates the sparks that fly, so it’s all about character development in an extremely compressed period of time, as the entire film runs only 79 minutes.  Polanski began working on the film while under house arrest in Switzerland after his 2009 arrest (subsequently released as Switzerland would not extradite him to the United States for decades-old sexual assault charges), where confined to four walls himself allowed him to develop various strategic elements of how to properly stage the play on camera.  If truth be told, having seen the 73-minute One Act play in Chicago at The Goodman Theater ('God of Carnage' at the Goodman Theatre: A fight over the kids ...  Chris Jones review from The Chicago Tribune, March 14, 2011), the theatrical experience is far superior, where the changing tone from bland pleasantries to fever pitch hysteria feels more spontaneously evolved, as this frenetic back and forth pace can be more easily achieved onstage, as there are no edits or cuts.  Polanski, on the other hand, has fun with the idea of a couple that will never leave, as they’re seen leaving the apartment at the beginning, where they’ve apparently already had their say, and both families are still exchanging pleasantries, but some small detail remains missing from their follow up plan, which, like rewinding a clock, brings them back to the beginning where they scramble back inside and start all over again, a process that happens repeatedly throughout the film, each time getting progressively less civil.


Michael is a relaxed, friendly, relatively unambitious guy who sells housewares, a kind of guy next door, while his wife Penelope is a type-A perfectionist personality that hides her obsessive compulsive behavior under the guise of being a do-gooder, a self-righteous, morally indignant liberal who believes there’s an answer for every problem under the sun.  Nancy is the gorgeous trophy wife who sits there looking beautiful, who maintains her calm, blank expression until after a few drinks when she switches into full assault mode, a tigress on attack, while her husband Alan is a corporate attorney, the kind of nonchalant weasel that gets mega-corporations off the hook by hiding the evidence and cooking the facts, a guy that lives on his cell phone 24/7, where we constantly see him on the phone finagling his way through a potential gross negligence pharmaceutical lawsuit.  Pure and simple, what eventually happens is that once they allow themselves to get sidetracked, which is every time the cellphone rings, they reset the scene from a slightly different vantage point, eventually forgetting the matter with the children altogether and launching into a frontal assault exposing the hypocrisy in each other’s lives, which they do exceptionally well.  They’re exceedingly good at tearing each other apart, while ridiculously amateurish at finding common ground, where it’s impossible to disguise the fact that they find each other revolting, probably making despicable parents, where of course they’re to blame for their son’s behavior, where Penelope at one point indicates Zachary’s behavior violates Homeland Security.  The exaggerated element of farce has a few exquisite moments, a good bit of politically incorrect hilarity, but also several flat moments where someone keeps talking but nobody’s laughing.  Winslet is probably the weakest in the cast while the other three have a field day of crudely undermining their opponent’s credibility. Another film that takes this same theme to the next level is Fassbinder’s exotic visual labyrinth and camera tease Chinese Roulette (Chinesisches Roulette) (1976), which is much more savagely brutal, exposing husband and wife marital infidelities face to face through a truth or dare game, having the tables turned on each of them during what was supposed to be a secret weekend getaway with their significant other.
Posted by Robert Kennedy at 12:23 AM