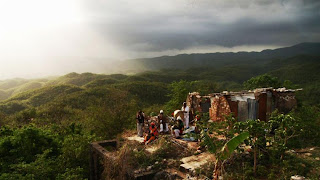 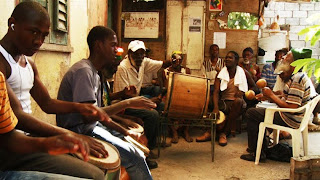 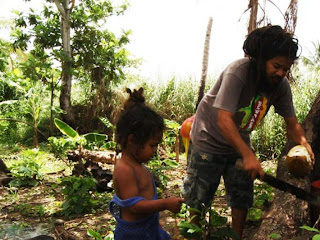 THE FIRST RASTA (Le Premier Rasta)          C
France  Mauritius  (86 mi)  2010  d:  Hélène Lee and Christophe Farnarier
What this attempts to be is a documentary exploring the roots of the Rastafari movement in Jamaica, focusing on one individual who allegedly founded the movement in the 1930’s, Leonard Percival Howell, who was one of the 25,000 Jamaicans working on the Panama Canal as exploitive labor, where they were treated like a slave class by the dominating colonial powers, developing a socialist worldview, where footage from Eisenstein’s POTEMKIN (1925) is utilized to express his internationalist “workers of the world” sentiment.  When the Canal was completed just prior to World War I, and the subsequent Russian Revolution, the Jamaicans were quickly expelled from Panama, becoming rootless exiles abandoned by the world, mostly penniless and uneducated.  Marcus Garvey attracted the attention of many blacks, as he spoke to the heart of displaced Africans, advocating a “Back to Africa” movement which inspired a Black Nationalist movement within Jamaica, a former slave colony that remained under British colonial rule.  In the early 1930’s a religious and social movement called Rastafarianism evolved in Jamaica, claiming Garvey as a prophet, where Haile Selassie, the last emperor of Ethiopia, was considered a living God, known as “Ras Tafari,” as prophesized by Garvey who claimed an African King would be crowned.  Followers of Emperor Salassie withdrew from Jamaican society and refused to pay taxes to Britain, rejecting Christianity as a “white religion,” calling discriminatory Western culture a modern day Babylon.  Howell established the first Rastafarian community in 1939 on a remote Jamaican hillside location called the Pinnacle, where what attracted Howell’s attention was learning to be self-reliant without depending upon the whites, where many Rastafarians adopted the naturally grown ganga (marijuana) as their sacred herb.
One particular difficulty with this film is the state of confusion running throughout, as the filmmakers use the African style of talking history, where friends and family of Howell describe what they remember about their experience, where for some of the elders this is more than 50 or 60 years ago, where what is immediately evident is that none of the “witnesses” have any formal education, so their descriptions of life at the Pinnacle are vague and incomplete, never really mentioning why they came together as a group in the first place, what spiritual kinship they shared, or what initial hardships they must have endured attempting to be completely self-reliant for such a large group of nearly 3000 people.  Viewers may be scratching their heads trying to figure out what was really happening and why, as one envisions something like a back to nature utopia, but Howell himself expressed interest in multiple wives, which was not addressed, and no one describes any food arrangement, work requirements, or communal rules, yet this went on for some twenty years, but the director certainly offers little help in pulling this Pinnacle material together with pictures or stories or any sort of historical reference.  Instead the film is a series of fragmented recollections, tainted memories, really, as much of it is filled with the bitterness of disillusion, as shortly after a visit to the island by the British Queen in 1959, prior to achieving independence in 1962, the Pinnacle was subject to a major police raid that destroyed the living compounds, burning much of it to the ground while also making several arrests, basically shutting down the operation and sending people fleeing in all directions.  No one mentions any legal basis or justification for the raid, even in the most general terms other than to suggest they were defying colonial mentality by attempting to be free and liberated.  However there is some reason to believe there may have been an ongoing series of raids before the community was destroyed, where the perceived negative social repercussions from the out of control ganga drug enterprise within Jamaica may have become the tipping point.
It begs the question, now that they are an independent country, what’s stopping them from building another self-reliant Rastafarian community?  Instead the painted portrait is of a scattered presence on the island, with many living instead in urban ghettos, largely responsible for creating bass heavy ska music in the 50’s before evolving into Reggae music in the 60’s, which became internationally accepted due to the influence of the acclaimed Bob Marley, who accentuated many Rastafarian themes in his music, like Bob Marley & The Wailers 'Rastaman Chant' (2:24), but you won’t find them here in this film.  Instead, the filmmaker likes to gather a group of guys, young and old, on the street playing drums and chanting Rastafarian songs, where a singer calls out, like a church preacher, which is followed by a choir response, creating a hypnotic rhythm, much like the Cuban Guaguancó style music seen here:  Guaguancó - YouTube (1:41).  We see this stylized arrangement 4 or 5 times in the film, each seemingly on-the-spot, where it’s apparent music has endured even as much of the Black Nationalist sentiment has become marginalized.  Instead the music suggests one love, one heart, and a kind of universal interracial community living in harmony, much like predominate Mardi Gras themes, which also mix French, African, and Indian cultures into a rhythmic and highly percussive beat.  What’s missing from the discussion is any mention of education or cultural rights, as a prevailing theme throughout the film is a portrait of dispossessed people who remain poor and uneducated inside Jamaica today, whose collective political voice remains silent, perhaps representing only about 1 % of Jamaican society, yet their desire to remain opposed to the typical societal dictates of greed and consumerism and instead advocate a healthier back to the land lifestyle of self reliance remains admirable.  But this documentary is spotty at best, leaving out a more historical perspective for personal talking points that simply don’t reveal the whole story of what remains an elusively intriguing subject.
Posted by Robert Kennedy at 10:30 AM