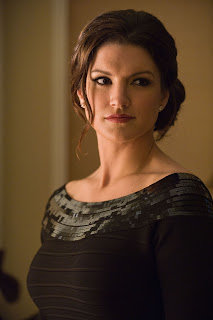 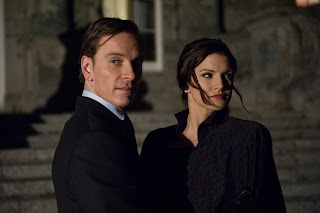 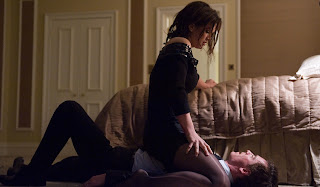 HAYWIRE                  B
USA  (93 mi)  2011  ‘Scope  d:  Steven Soderbergh
While Gina Carano will not make anyone forget about Jennifer Lopez as Karen Sisco in OUT OF SIGHT (1998), she may be a logical extension of her badass personality, though never reaching the elevated Pam Grier echelon.  In fact, rather than accentuate her feminine traits, she comes across as just one of the guys, a former marine/private contractor/mercenary hired for delicate operations where the best in the business is desired.  She can be counted on for her intelligence, discretion, and thorough nature, where she leaves no loose ends behind.  It doesn’t hurt that she’s also gorgeous.  Soderbergh, with his second release in the past 6 months, has hinted on retirement after wrapping up these last few films, but his signature stylization is all over this film, a sleek, fast paced action thriller that easily moves to various on-location sites around the world, where from the opening sequence Carano continually fights her way out of jams, with the pulsating, jazzy soundtrack by David Holmes.  In fact, it would fit nicely with the international globetrotting themes of the memory challenged but ballsy action of the BOURNE Trilogy (2002 – 2007), but since it shares a similar actor in Antonio Banderas, the film it likely compares to is Brian de Palma’s FEMME FATALE (2002), featuring model/actress Rebecca Romijn-Stamos in an action role, where De Palma wipes the mat with the alluring sexuality, body doubles, and a much more intricate and complicated web of deceit, an homage to Hitchcock that was off-the-wall entertaining.  This film pales in comparison, largely because Carano never explores the sex factor and tellingly doesn’t attempt much complicated dialogue or acting interaction, instead she can be counted on for terrific ass kicking sequences, more in line with her brief career as a mixed martial arts star, formerly seen as Crush in the American Gladiators (2008) television series.
Even Tarantino, or Russ Meyer for that matter in FASTER, PUSSYCAT! KILL! KILL! (1965), have fun mixing female action with clever or humorous dialogue, but despite a B-movie script from Lem Dobbs who wrote Soderbergh’s best film, THE LIMEY (1999), there isn’t a trace of memorable dialogue here.  While entertaining, to be sure, this is not heady stuff, despite surrounding Carano with some of the top actors working today, where it’s likely to be a split decision as to how well she pulls it off.  The fight scenes were overseen by Aaron Cohen, a specialist in providing counter-terrorism training to the U.S. military.  From an opening restaurant scene gone wrong that recalls PULP FICTION (1994), Soderbergh introduces a flashback sequence where Carano pulls off a hostage rescue operation in Barcelona with the guy she’s beating the crap out of in the restaurant (Channing Tatum), where they worked successfully as partners with no hitches, but suddenly her team has inexplicably turned against her, which she discovers in another highly suspicious undercover operation in Dublin with Michael Fassbender, as she moves invisibly through a world of espionage, double agents, government cover ups, and secret identities.  Never trusting anyone, she develops a secret sense, but unlike so many of the other action movies, she doesn’t seem like a super hero, as she gets hit frequently and knocked down, even smashed against walls and windows, but she has a way of sustaining the battle until she gains the upper hand, where her action sequences look real instead of choreographed and computer enhanced.  She’s an interesting figure, running through the gamut of men in this movie, but something of a lone wolf, where the double crosses by the employers in her line of business, namely Ewen McGregor and Antonio Banderas, have a way of playing themselves out, where she has to sit tight and make her move when they least suspect it.
Even Michael Douglas, looking more like his father’s gruff intensity as he ages, is another player on the scene who has to cut his losses and regroup due to unexpected backroom deals that eventually lead them to the Santa Fe desert home of Carano’s father, Bill Bixby, a former marine who is not easily fooled by all this monkey business.  It’s a beautiful home with a stunning landscape, another glass-windowed, Architectural Digest pick, like the spectacular Big Sur home on the edge of the woods overlooking the ocean in THE LIMEY.  But for all the meticulous detail prevalent in Soderbergh films, the rooftop chase sequences, her miraculous escapes, the brilliant locales, the alternating time sequences, the upper tier cast of characters, the mano a mano fight to the finish on the beach, and even a steady hand behind the camera that doesn’t resort to handheld movement to capture the physicality of mood, which is instead captured by the natural grace of Carano’s fight sequences, all of this overshadows the lack of interior character, which was the biggest selling point of Terence Stamp in THE LIMEY, as he was a man driven to do the impossible.  Not so here, as Carano is simply a well-trained professional that gets double crossed, something that happens all the time in the give and take of international power struggles, corporate takeovers, and government corruption.  This heavy style over substance is the ultimate undoing of the film, though it’s perfectly enjoyable, just not particularly memorable, unless, of course, you're a teenage fanboy who prefers watching this over playing video games, where the director is attempting to tap into the YouTube generation.  Oh, and Soderbergh has 3 more films lined up in post production—so much for retirement—at least none of them are in 3D.
Posted by Robert Kennedy at 6:16 PM