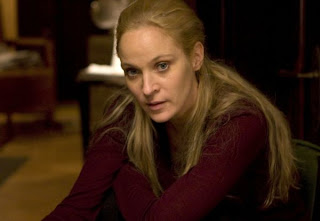 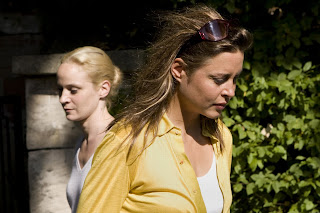 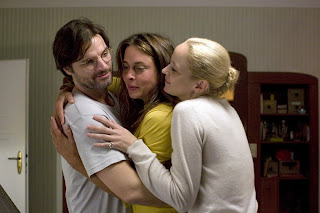 This film makes the biggest departure from the original concept, which was to experiment freely with the use of genre films, claiming this aspect was missing altogether in German films, but there’s little evidence of it here in this second segment of The Dreileben Trilogy, all part of a series of interconnected films, each taking place in the same location and linked by a familiar event, the escape of a deranged killer.  Dominik Graf is not a name widely known overseas, as he is a professor for feature film directing at the International Film School in Cologne, but his success has largely come in the German television industry.  Graf’s claim is that the Berlin School prefers visual style to narrative and well written screenplays, an example of which is noted German cinematographer Uta Briesewitz whose Berlin School aesthetic helped shape the look of the first three seasons of the American television show The Wire, claiming the film school actually downplays the role of language in cinema and overlooks the possibilities of characters communicating with one another onscreen.  Accordingly, this is a decisively different tone than the other two episodes of the Trilogy, a chatty, dialogue driven film, where almost all the action is advanced not by what the audience sees, but hears through various conversations.  What this really turns out to be is an attempted critique of the bourgeoisie, in particular the professional class, where if it was meant to be a comic satire, it falls flat.  What this is most reminiscent of is Fassbinder’s THE THIRD GENERATION (1979), a savage satire on the comic ineptitude of the radical left, people who name drop talk of revolution, including the right books, quoting the right phrases, going to all the important meetings and demonstrations, where the middle class actually turns radical action into a convenient lifestyle choice.  What was once spirited street defiance, confronting the government and the police through mass disobedience, has turned into a comfortable bourgeois lifestyle without any real ideology except self-centered indulgence.

Jeanette Hain plays Jo, a criminal psychology specialist who is called into the town of Dreileben to offer her expertise to the police in helping catch an escaped killer.  She is provided a working team to assist her round the clock, but mostly they do nothing more than sit and toss ideas around from 9 to 5 before heading off for lunch, where food is really what’s at the top of a policeman’s agenda, continually introducing her to new places that serve heaping portions on a plate, offering their rave reviews of noted German delicacies.  Jo has only a single surviving victim to interview who can help identify the killer, and her remembrance is not very helpful, as what she describes is more animal than human, so this does not exactly consume her time.  Instead, because of a foul up at the hotel where she planned to stay, she instead pays a visit to a best friend, Vera (Susanne Wolff) and her pseudo writer of a husband Bruno (Misel Maticevic), both living in a historical home that was used by various East German radical organizations at one time or another, where Bruno loves to point out their former meeting rooms.  They spend the majority of their time rehashing old times over several bottles of wine every night, which turns out to be little more than gossip sessions.  The director struggles to incorporate humor into what is essentially a serious story, so if these intimate conversations were meant to be comic, they’re not, and they’re overlong, minimizing the importance of the criminal at large while they instead share stories about a boyfriend they unwittingly had in common.  Bruno is reduced to little more than an innocent bystander.  The film all but forgets the premise of her visit and instead explores the parameters of Jo and Vera’s long term friendship, whether it can withstand some bracing truths about what happened years ago, as they intently delve into each other’s past history, an attempt to stress an otherwise overlooked factor throughout the Trilogy.

There’s an interesting contrast between the cop scenes, now introducing a slightly deranged cop and a corruption-within-the-force angle, where their attempts to track down the killer are reduced to brief episodes of non activity, mostly people just standing around, while instead all the focus and attention is on long, drawn out scenes of after-work drinking and socializing.  Unless you knew ahead of time that there was a deranged escaped convict on the loose, you’d barely know this was part of the story, though there is a freeze frame photo-op.  If Graf is supposed to be a screenwriter aficionado, his characters never have an intelligent word to say throughout, making this a tepid and uninteresting experience of the worst kind, as there’s only sketchy character development featuring mediocre acting, lengthy wine-fueled conversations, few police updates, no action to speak of, and literally nothing for the audience to grab hold of.  What this film has to say about professionals is more about their jaded and slightly askew perceptions of themselves, where they are continually seen as petty and insecure, constantly asking for personal reinforcement to help boost their sagging self-esteem.  After all, they’re supposed to be catching a killer on the loose.  Jo’s suggestion on how to catch him not only seems ludicrous but downright criminal in itself, where any department that actually carried out this plan would subject themselves to personal lawsuits for damages in the multi-millions of dollars for placing an innocent civilian in harm’s way.  This feels like television scriptwriting, as it has no place in the real world, which is more interested in convictions that will stick.  Of vague interest, this is the only episode in the Trilogy actually shot on 16 mm film, but you can hardly tell, as this segment, largely shot indoors, makes the least effective use of the actual locations in an area known as Thuringia, which was part of East Germany, known for its historical and legendary past, and while this is the 2nd episode in the Trilogy, chronology-wise this is the final episode.
Posted by Robert Kennedy at 2:02 AM