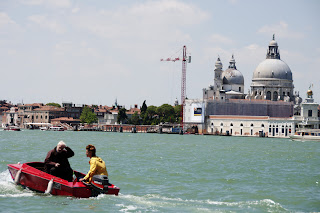 UNFORGIVABLE  (Impardonnables)      B-
France (108 mi)  2011  ‘Scope  d:  André Téchiné
André Téchiné has distinguished himself through elegant films that delve into the complexities of human emotion and relationships.  Known particularly for his ability to draw strong performances out of his female performers, Téchiné has collaborated with some of his country's most respected actresses, and some of the best examples of his work were his collaborations with Catherine Deneuve:  HÔTEL DES AMÉRIQUES (1981), SCENE OF THE CRIME (1986), MY FAVORITE SEASON (1993), and THE GIRL ON THE TRAIN (2009).  Téchiné has continued to make moody, dysfunctional romantic dramas that are tinged with an element of intrigue or violence and is among the most adroit social observers in the modern era, usually writing or co-writing his own films which have an intimate chamber drama quality with an understated intelligence, accentuating the performances, including the entire ensemble cast, is fond of the use of ‘Scope, and this film is no exception.  Adapting a novel by Philippe Djian, whose work 37°2 Le Matin was the basis for Jean-Jacques Beineix's BETTY BLUE (1986), this is a somewhat disappointing venture of the French culture invading Venice, full of gorgeous color and picturesque locations on the island of Sant’Erasmo, but bringing with them a pronounced inability to communicate and a baffling lack of appreciation for Italy.  Typically novelesque, there are a host of interconnected characters, each coming under the director’s scrutiny, but none that ever connect with the audience, as there’s a thoroughly unengaging sense of disconnect that prevails throughout, continually offering a foreigner’s perspective, feeling out of place, where the guiding principle seems to be a discomfort in one’s own skin and an inability to accept who you are.
Moving the novel from the Basque coast of Spain, where Téchiné filmed HÔTEL DES AMÉRIQUES, to a remote island across the channel from Venice, the story concerns the arrival of a Parisian writer Francis (André Dussollier) looking for a little peace and quiet where he can write, initially locking horns with real estate agent Judith (Carole Bouquet), before being offered a spectacular location a mere boatride away, where of course en route their tiny motorboat runs out of gas midway across just as a giant ship is passing by, immediately suggesting imbalance as well as the lurking presence of danger, but Francis is moved to rent the seaside villa for one year on the condition that Judith live with him.  As preposterous as this sounds, the film flashes forward to the following summer where the two are a happily married couple living together on the island, where she’s continually in transit on working assignments, completely independent, with an endless history of lovers both male and female, which leaves him alone, but unable to write, as he has other pressing issues to worry about.  After a brief visit from his continually dissatisfied and overwrought daughter, the actress Alice (Mélanie Thierry), and her young daughter, Alice simply disappears, causing Francis plenty of worry, which has a way of coming between he and Judith, as if the bond of trust has been broken.  Francis decides to hire Anna Maria (Andriani Asti), a retired detective and former lover of Judith, to search for his missing daughter.  Perhaps not unexpectedly, what she discovers is that Alice hasn’t so much disappeared as escaped into the arms of a young love Alvise, Andrea Pergolesi, an aristocrat of noble parentage but currently dabbling in petty crime to cover a continual cash flow problem, where life in Venice is seen as a web of deceit.
Unfortunately, none of these new characters introduce any new life into the film, where instead the drama shifts to Francis all alone on the island, continually brooding about his wife’s excessive absences, always claiming work, but he suspects romance, especially since the intensity of their torrid romance has flickered out.  Ridiculously, he hires Anna Maria’s son Jérémie (Mauro Conte), fresh out of jail, to tail her, but his methods couldn’t be more obvious, especially when the trailing boat is following so close behind you could almost touch it.  What this really suggests is that Francis is continually driving women away, his wife, his daughter, through his suffocating distrust, unable to accept them as they are, free and independent women, always suspecting the worst.  Many of these characters have duplicitous sex lives, offering an undertone of liberal mindedness throughout, but Téchiné seemingly does so little with these characters who drift through their lives barely knowing one another.  Something of a relationship study, these relationships are defined by an inability to understand and accept the inherently shifting boundaries which are continually in flux, much like the interconnecting watery canals of Venice, which offer a stark contrast from the rigidly fixed cement and asphalt roadways back home in France, where one’s feet are firmly planted on the ground.  Of particular interest is an unexpected flashback sequence showing archival black and white images of Andriani Asti when she was a captivatingly beautiful young woman, offering perhaps the most unusual reflections in the film, the fleeting brevity of youth, all lost in the blink of an eye, where before you know it the adrenal rush of excitement in the physical attraction of love changes to a more mature understanding, older and wiser, where the earth shifts beneath your feet aren’t always a disaster in waiting, a cause for concern, but simply the earth shifting, where the rigid standards for the titled offenses become less severe, accepted as more common, ordinary occurrences.
Posted by Robert Kennedy at 11:02 AM