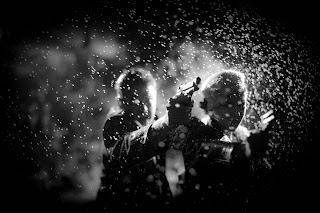 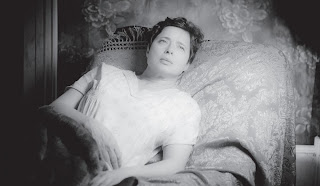 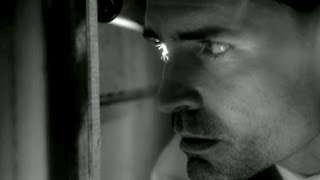 KEYHOLE                  B+
Canada  (94 mii)  2011 d:  Guy Maddin           Official site
A Guy Maddin film is likely to be weird and creepy, among other things, although weirdness is his state of normalcy.  Maddin is one of the more original filmmakers working today, a highly inventive guy who thrives on Silent black & white movie techniques, where watching his films resembles sleepwalking, as his imagery is very dreamlike, usually writing his own scripts, using original German Expressionist lighting and set designs, where early in his career he actually hand painted each colorized celluloid frame.  He infuses a wonderful sense of surrealistic mystery with an audacious sense of humor, often intermixing graphic nudity with bizarre hallucination sequences, and makes frequent flashbacks to childhood.  His films often create a sense of chaotic confusion, blending fiction with non-fiction, using a stream-of-conscious, experimental style where there’s little or no narrative, no character development, rather wooden acting, where a sense of the ridiculous predominates the mood along with a heightened melodramatic hysteria.  Frequent themes include the trappings of love, murder, mental anxiety, Russia, hockey, homoeroticism, his perennially absent father, not to mention everpresent references to his hometown of Winnipeg, where all his films are shot.  His best films may be CAREFUL (1992), where the residents of a small town in a snowy mountain village have to be quiet and keep their voices down or risk being consumed in snow from a lurking landslide, so all the characters keep whispering, or his recent MY WINNIPEG (2007), which is a hilarious tribute to his hometown.  If you'd like proof of his film mastery, check out his award winning 6 minute short The Heart Of The World - Guy Maddin - YouTube (6:08) premiering at the 2000 Toronto Film Festival, where his film condenses so much into so little time, averaging two shots per second, a masterclass in film editing that literally shocked the world, many feeling it was the best film released that year.  There is no one on the planet that makes films like Maddin, an abstract modernist whose film puzzles are as intelligible as Cubist paintings, where the uninitiated often have a hard time making sense out of his highly condensed and extremely rhapsodic film expression, shot on Digital here for the first time, offering unrestricted freedom of mobility.
KEYHOLE is largely a haunted house film, told in a murder mystery style, where a collection of oddball characters starts piling up, some obviously ghosts, but others who have the capacity to see and feel these haunting spirits who are easily spoken to, though they often disappear before your eyes.  This film does have a slightly demented narrative form that keeps challenging the audience’s reference points, as the eccentric goings-on in this ghost house don’t always make sense, though the opening is right out of John Huston’s KEY LARGO (1948), where a wanderer in the night named Ulysses, no less (Jason Patric), walks in out of an electric storm returning home where his gang has gathered and his first order of business is to have all the characters line up against the wall, the dead ones facing the wall and the live ones facing forward.  The dead ones are told they’ll have a pleasant police escort to the morgue, where they’re ushered out the door to the sound of rapid gunfire.  Gangster life was never easy.  Ulysses is the top dog who gives the orders around the house, where the film seems to be a collection of incidents that largely take place in his head, like an evolving memory piece where he wanders through various reflections of his own imagination, interacting with ghosts from his past, where it’s hard to tell if any are still living, as all have a deep connection to death.  Certainly since Maddin’s first short film, THE DEAD FATHER (1986), Guy Maddin - the Dead Father Clip - YouTube (2:00), the director has mixed absurd humor with surrealist flourishes, where mingling the living with the dead is a familiar theme, where here Ulysses actually carries around with him, wherever he goes, a bound and gagged blind prisoner strapped to a chair, who turns out to be his (very much alive) dead son Manners (David Wontner), also his own personal psychic (Brooke Palsson), who may be his daughter Denny, who walks around in a weakened and collapsing state of exhaustion from drowning, which certainly doesn’t prevent her from taking her clothes off frequently, apparently swooning from the heat. These three set out to explore the house (and their family) through a secret passageway.

Meanwhile, waiting upstairs, Isabella Rossellini as Hyacinth (his wife) lays covered in her bed with her naked father (Louis Negin) held hostage on the floor chained to the bed, “There will be no forgiveness, that's why I keep you chained to my bed,” while her lover Chang (Johnny Chang) lurks in the shadows, where at least the father offers an attempt to explain what’s going on via a recurring narration, though it’s clear they don’t wish to be disturbed by Ulysses and that racket he’s making in the house, so they have locked the door, where Ulysses can only stare in at her and speak through a keyhole.  The connections between the deadpan Ulysses and his family remain forever distant, as at times he doesn’t even recognize them, himself an absent father.  The morbid noirish atmosphere within the house is all drenched in claustrophobic detail, with other characters continually moving in and out of the scene, where there is always a new storyline to follow along with resurfacing family legend.  There’s even a Cinderella character continually scrubbing the floors, where someone gets electrocuted when they attempt sexual favors, and a brief appearance by Udo Kier as a dismissive Freudian era medical practitioner, also a James Whale FRANKENSTEIN (1931) style electric chair sequence powered by stationary cyclists, which has the effect of recharging many of the dead memory cells for Ulysses, while others who try are less fortunate.  An earlier Maddin short Guy Maddin - Send Me to the 'Lectric Chair (2009 ...  YouTube (6:53) with Louis Negin adds a familiar allure, even including the continued reference to the clock about to strike midnight.  Basically, KEYHOLE is a tour de force blitzkrieg of phantasmagorian Maddin images, often incoherent, somewhat in the manner of the infamous James Joyce stream-of-conscious novel, a masterful piece of editing that often resembles subliminal clues interspersed throughout that offer keys to Ulysses’ fragmented memory.  “Remember, Ulysses, remember,” calls the voice of the narrator, as if there is a secret code.  Forced to continually turn back the clocks, this is a conceptual exercise where in his search to get up the stairs into his wife’s bedroom, Ulysses is repeatedly frustrated by recurring thoughts and memories and has to continually contend with ghosts of the past, where often, even in our own lives, the living and the dead may feel interchangeable.
Posted by Robert Kennedy at 12:14 AM