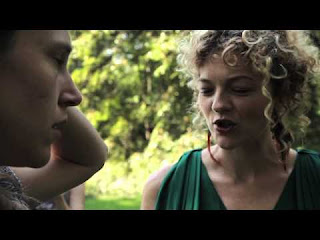 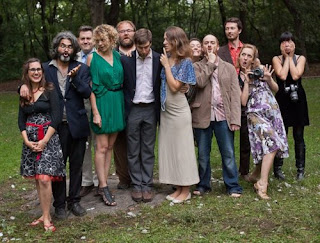 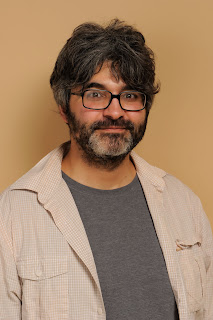 RICHARD’S WEDDING        C
USA  (88 mi)  2012  d:  Onur Tukel                 Factory 25 [us]
Something of a rival to The Color Wheel (2011) for the most unendingly miserablist dialogue, but not nearly as inventive, both featuring annoying, unlikable, and somewhat nauseating self-centered characters that talk endlessly about themselves, that place themselves at the center of the universe where little else matters, where their petty problems and opinions become magnified by their need to express often revolting views that reflect a gross insensitivity and shallowness about their superficial nature and the Me-generation culture from which they spawned.  Unfortunately, most of this feels downright pathetic, where the uniformity of miserablism hardy feels natural, but becomes something forced upon us by a director who’s trying to tap into the Mumblecore movement.  Andrew Bujalski, whose sound mixer Eric Masunaga allegedly coined the phrase Mumblecore, where the term was first used publicly by Bujalski in subsequent interviews, at least worked with Richard Linklater on WAKING LIFE (2001) before he made his first film FUNNY HA HA (2003), creating an entire film about people who can't ever make up their minds, who exist totally in a world of ambivalence.  Poorly lit and barely audible throughout, shot on shoddy 16 mm film with a screen look that amateurishly resembles home movies, the film was cleaned up for a DVD release.  In keeping with the use of non-professional actors, using an extremely low budget with cheap, on-the-fly production values, this is another film that delves almost exclusively into the narcissistic nature of middle class white culture, featuring opinionated, overly self-righteous characters that haven’t a clue about their place in the universe, but spend their lives deriding and mocking others for making any kind of effort at all, exhibiting a kind of self-styled fatalism that’s more an excuse or rationalization justifying doing as little as possible.
Starting out with just two characters, writer/director/lead actor Onur Tukel as Tuna is an insufferable bore, yet this doesn’t prevent him from spouting off to the point of bragging about his individualistic and carefree lifestyle, refusing to believe in marriage or long term relationships, making self-serving platitudes about himself that he thinks makes himself more interesting to others, but they’re simply an endless stream of thoughtless generalities that reflect his arrogant and offensive nature.  Walking down the sidewalks of New York with him is Alex (Jennifer Prediger), who tries to keep the guy in line, continually forced to point out his rudeness and social deficiencies, where she serves as an example of someone in a trusting and committed relationship, continually challenging Tuna’s short-sighted and more hedonistic views.  The extended series of tracking shots through various neighborhoods in the city, similar to Linklater’s choreography of conversation through Vienna and Paris in his lushly romantic couplet BEFORE SUNRISE (1995) and BEFORE SUNSET (2004), feels more remarkable than anything the two friends have to say to one another, continuing on a subway ride to a party at a friend’s house, Russell (Darrill Rosen), where they are the first to arrive.  Russell, an instant millionaire from a successful computer design, turns out to be the biggest blowhard in the movie, obnoxiously making the most racist and crudely offensive comments, which he believes supports his misanthropic views that the world is going to hell, that no one cares anymore, and humanity sucks.  Despite his rambling monologues, all he ever talks about is himself, easily one of the more loathsome characters on the planet.  As more friends arrive, what becomes clear is how Tukel is force feeding the stream of miserablism, where he continually uses utterly tasteless, off the wall views on sex, drug and alcohol addiction, mental illness, race, rape, and racism for humor and shock value, diminishing any hint of believability or naturalism.
Moving outdoors into Central Park, the party reconvenes for a wedding between Richard (Lawrence Michael Levine) and Phoebe (Josephine Decker), which seems hastily arranged, particularly when they discover they have no minister to perform the services, where the friends stand around and start picking at each other instead, where by now the theme of inappropriate behavior has been pretty well established as even the wedding couple starts nitpicking about their differing views on the upcoming ceremony.  It all runs together after awhile, where the characters are near indistinguishable and nothing anyone has to say actually sticks as memorable or enlightening.  Instead, it is the small snippets of musical interludes selected by musical supervisor Devoe Yates that offer a change of pace, where the endless chatter finally shuts up, and at least for a brief moment in time there’s a quiet pause that feels like such a relief.  Alex’s cousin from Harlem, Louis (Randy Gambill), a down on his luck recovering drug addict, is a licensed minister (from the Internet) that fits the bill, where just as they send for him, Alex receives a call from her boyfriend who wants to end their relationship, where she is dumbstruck by the news, believing in the permanence of what they had together as perhaps the only thing that separated her from the riff raff and losers that surround her that she could call her friends, becoming demoralized on the spot, turning on everyone with a wrath of criticism and negativity, showing no patience especially for that lying weasel who calls himself a minister, where the entire festivity breaks down in utter mayhem as a cloudburst overhead finally drenches them all in rain.  More random moments than an actual movie, there’s little directorial creativity exhibited, a kind of haphazard use of characters, very little spontaneity, some humor, and a long and exhaustive use of dialogue that is largely inane and superfluous, leaving little to recommend here other than the all too brief appearance of Jonas Mekas’s daughter Oona (Kristin, the charming blond in the green dress) and the utter weirdness of another character named Taco (Dustin Guy Defa).
Posted by Robert Kennedy at 2:05 PM