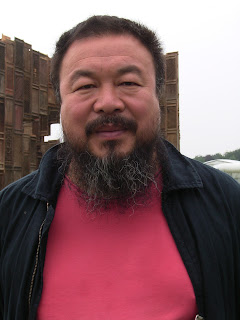 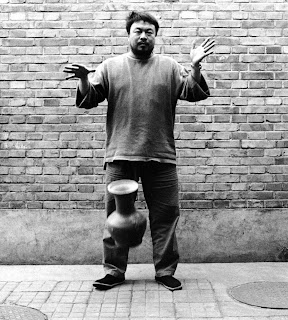 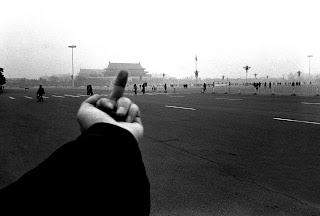 China is the unseen elephant in the world today, a Goliath that is opening many economic doors that were once closed, creating modern economic growth through targeted capitalist ventures while retaining tight clamps on the nation’s citizens through the rigid social conformity of the Communist Party.  While the success of the 2008 Beijing Olympics gave the world a glimpse of China rarely viewed before, it’s a secretive nation mostly closed off to the outside world.  Since the Tiananmen Square political fiasco of 1989, China has arrested and/or suppressed all opposition voices effectively eliminating any public dissent.  Within this framework of censorship, people are expected to live and thrive in the modern world.  Much like the arrested filmmakers of Iran, Jafar Panahi, Mohammad Rasoulof and Mehdi Pourmoussa, artists are censored in China as well, where several are also jailed on political crimes, such as the blind human rights lawyer Chen Guangcheng who after being imprisoned for 4 years was released to house arrest and made a daring escape to the United States embassy in April 2012, or the 2010 Nobel Peace prize winner Liu Xiaobo, a professor and Chinese literary critic and co-author of Charter 08, a declaration for democratic reform signed by artists and activists, who was sentenced to 11 years in prison December 2009 for inciting subversion of state power, installation artist Wu Yuren was arrested in November 2010 for protesting the demolition of an artist’s neighborhood including the forced displacement of residents, but was eventually released a year and a half later, or Tan Zuoren, an environmentalist and literary editor sentenced to five years in prison for inciting subversion of state power, largely for his writings on Tiananmen Square.  Perhaps the artist best known throughout the world, whose notoriety likely prevented his arrest, is Ai Weiwei, one of the designers and artistic consultants of the Bird’s Nest Stadium (Full resolution) used during the Olympics for the opening and closing ceremonies, and an outspoken critic of the Chinese government, actually disavowing those Olympics due to the forced displacement of so many citizens.  Something of a performance artist, he videos himself dropping and breaking invaluable antique pottery from ancient dynasties that he views as no different than the government smashing and ruining the lives of ordinary citizens through displacement policies.  A big, burly man with a mischievous smile, he’s a conceptual artist active in sculpture, installation, architecture, curating, photography, film, and social, political and cultural criticism, writing two articles daily on a political blog until it was shut down by Chinese authorities in May 2009.

Director Klayman is a freelance journalist who lived in China from 2006 to 2010 producing radio and television stories for NPR’s “All Things Considered,” turned first-time director, though it’s questionable how much autonomy she exerts, never delving into difficult or uncomfortable questions, giving Ai Weiwei free reign in what amounts to his own personal forum.  Seen setting up various art installations throughout European art museums, these are large scale projects, some that will fill an entire warehouse, always with overt political overtones.  What’s immediately curious to the viewer is why others are imprisoned, yet perhaps the most vociferous government critic anywhere in the world lives in a fortress, by Chinese standards, and remains free to travel abroad.  Ai is seemingly driven by the failures of the past, particularly his father’s generation which succumbed to the repressive regime of Chairman Mao Tse Tung (Mao Zedong).  Ai’s father Ai Qing was educated in Paris, writing books of poetry and several novels, but was arrested several times in China for his leftist activities opposing Chiang Kai-shek, eventually joining the Communist Party in support of the war effort against Japan, becoming a Party literary editor, where the voices of his generation were among the most fiercely outspoken artists and activists in Chinese history, where there was no government muzzle on their highly independent views until his arrest in 1958 during the Anti-Rightist Movement, a prelude to the Cultural Revolution.  Denounced as regressive and not allowed to publish for twenty years, he and his family were forced into re-education camps.  Ai himself was one of the young Chinese elite who spent a dozen years studying in New York City during the 80’s, where he was particularly impressed by the Iran Contra trials on television, where the government’s actions were actually questioned in public hearings before the nation, something unfathomable in China.  While he got his start as an artist in the East Village, his experiences in America (which included a fascination with blackjack tables in Atlantic City) also awoke his activist oriented tendencies, which translated to his overall views on China when he returned in 1993 due to his father’s ailing health.

Joining various artist collectives, Ai had his hand in various art and architectural projects, becoming fascinated with the power of the individual, how the progressive views of one can stand up against the rigid social injustice and intolerance of the collective, which is reflective in his art as well as his newfound interest in blogs.  Profoundly influenced by the Tiananmen Square massacre, having experienced uncurtailed freedoms in America, Ai became that lone voice against the immovable wall of government, which after it makes decisions is immune to change or reconsideration, even through the legal process, which Ai expertly documents through his own persistence.  When fellow artist Tan Zuoren was on trial, he traveled to the region to testify on his behalf, but instead he was awoken in the middle of the night in his hotel room and beaten up by policemen, some of which is captured on a live cellphone feed, where he was detained and eventually hospitalized, requiring surgery due to an inflammation to his brain from a blow to his head.  Not only was he not allowed to testify, but the police refused to acknowledge what happened.  Perhaps the most moving segment is his response to the 2008 Sichuan earthquake, where nearly 70,000 people died, including many schoolchildren whose school buildings crumbled from poor government construction.  Despite being forbidden by the police, Ai becomes obsessed with learning the name of every child that died, enlisting many volunteers to assist him, where after an exhaustive search over the course of a year he was able to publish over 5000 names on his blog at the one year anniversary, which accounts for why his blog was immediately shut down afterwards, forcing him to join the legions on Twitter.  Ai created a colorful wall of backpacks in a public Munich art display that spells out “She lived happily for seven years in the world,” a quote from one of the mothers whose child died in the earthquake.  Ai has a taunting and provocative nature that almost begs the authorities to arrest him, which they happily do in April 2011, keeping him secretly detained without a word of his whereabouts to his family, where he was subject to incessant interrogations before being released on bail 3 months later.  The film crew was obviously caught off guard by the arrest, having already returned to the States, as the movie ends with his release, unable to reveal any more updates.  While the dynamic force of his personality is admittedly overwhelming and his artworks inspiring, it’s apparent that for all the scrutiny and accountability that he expects from others, his own life is hardly a model of transparency, where there are still many unanswered questions, as he tolerates little intrusion into his own privacy.
Posted by Robert Kennedy at 9:04 AM