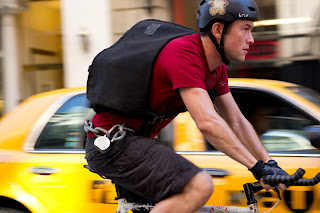 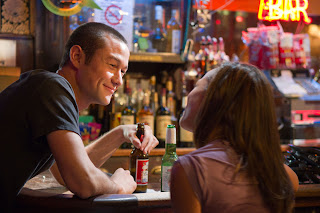 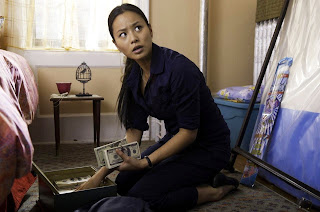 Shot on the busy streets of the Big Apple, this is a pure exhilaration movie in the realm of THE FAST AND THE FURIOUS (2001), where they are currently filming the 6th sequel to that one, though this features the hyperkinetic rides of notorious New York bike messengers, showing not only their frentic weaves and quick turns on a dime, often shooting through red lights and wrong way traffic, but in an inventive stroke, also expressing the adrenaline raced thoughts that cross the cyclist’s mind as they approach a particularly dangerous oncoming impact, where the rider often has to choose between the lesser of 3 or 4 evils, usually each one resulting in a horrible accident.  Occasionally the rider will get lucky and sail through, such is the life, continuously living on the edge, taking chances mere mortals would never dare try.  While there are 1500 bike messengers in downtown Manhattan, no self-respecting messenger could really star in a film unless they ride a fixed gear (one gear) bike with no brakes, claiming “breaks are death,” a mantra repeated throughout the movie, which means he never coasts but is constantly seen churning his legs in a mad love affair with cycling.  Of course, a common theme expressed throughout is that all the citizens of New York collectively hate these riders with an all-consuming passion, as they recklessly and irresponsibly dart away from the scene of the crime while cars collide, people are knocked off curbs, or packages and groceries end up strewn all over the street, all due to their manic maneuvers darting through some of the most congested roads anywhere in the world.  The film’s saving grace is it’s friendly, good-natured attitude about the whole thing, where much of it plays out like a cartoon, where it’s supposedly all in good fun.  Nonetheless, the mayhem they cause is never addressed, other than to get laughs, where even the injuries suffered onscreen never appear real, as they’re up and riding within minutes afterwards, taking even more reckless chances than before.

The draw to this movie is Joseph Gordon-Leavitt as Wilee (aka: Coyote, though he actually plays the Roadrunner role), whose wry smile and everpresent snarky attitude is perfect for this movie, though to be honest, it’s the trick shots, a neverending stream of incredible stunts, and visual effects that carry this movie, where nobody is really paying attention to the acting, or even the story, for that matter.  The director films this movie much like a Kung Fu television episode (1972 – 75), where the unsuspecting protagonist is subject to an avalanche of disgruntled evil intent, where a thoroughly corrupt cop, Detective Monday (Michael Shannon) who’s in over his neck in accumulating gambling debt to the Chinese mob, apparently addicted to a mahjong style poker game called Pai Gow, is his constant nemesis and relentless pursuer, a sadistic man with a demonic passion to get what he wants, which in this case is a lottery ticket believed to be worth $50,000, but of course, is thwarted at every turn (like the coyote), which only makes him more deliriously frustrated and angry, spending the entire movie in a diabolical rage.  Add to this some street cop on a bike (Christopher Place), another mope who tries to get in on the action but is continually outclassed by Wylee, who not to be undone, is also wired and in constant contact with his girlfriend Vanessa (Dania Ramirez), another messenger who’s getting kicked out of her apartment under mysterious circumstances while yet another fellow messenger, Wolé Parks as Manny, is trashtalking Wilee about who’s the fastest messenger while secretly trying to steal his girl.  While all this road rage is dominating the nonstop action, there’s a story within the story about Nima (Jamie Chung), an attractive Asian girl who turns out to be Vanessa’s roommate, seen converting $50,000 in cash to a Chinese Hawala lottery ticket, apparently run by Chinese gangs, as the intended recipient refuses to accept cash. Her story is heartbreaking, adding a tone of melodrama to the frantic pace.

From the outset, the crazed detective takes on various disguises in an attempt to intercept and steal the lottery ticket, using his actual police identity to manipulate the system and curry favors throughout the entire ordeal, where he’s constantly attempting to run Wilee over in his Lexus car, where the frenzied chase scene parallel to the elevated subway tracks is reminiscent of THE FRENCH CONNECTION (1971).  The director keeps changing the time sequences, usually moving backwards, altering the chronology of the film, often repeating the same time sequence but from a different character’s perspective, keeping the audience off balance while also using GPS navigational devices blown up on an animated map of New York City, where the route changes are constantly updated and outlined like a MapQuest entry.  To those with no geographical knowledge of the city, this is simply distracting, but it’s all done in fast action, keeping the pace of the film on constant acceleration.  Some of the obstacles the cyclists must outmaneuver are beyond description, but calling them daredevils is too benign a phrase, perhaps having a death wish might be closer.  Some may be particularly drawn to this video game style of filmmaking, as everything is broken down into an adrenal rush of excitement, as from the director’s viewpoint, little else matters, which makes this something of a fun but forgettable film.  A more amped up soundtrack might have helped, as it starts out appropriately enough with The Who’s "Baba O'Riley," heard in the studio The Who - Baba O'riley (5:07), or live in concert The Who- Baba O'Riley1971 Official Video Video [HQ] (5:19), a perfect choice for the film, but there’s nothing afterwards that offers the same euphoric giddiness.  For unadulterated exhilaration as a replacement for your morning coffee, why not try two much better choices of pure cinematic bliss, both masterfully edited with astonishing musical choices, a bike video featuring one of the stuntmen seen in the movie, Danny MacAskill's ride from Edinburgh to Dunvegan, Scotland " Way Back Home" (7:43), and the other is Guy Maddin’s deliriously inventive The Heart Of The World - Guy Maddin  (6:08), an expressionist, avant garde, machine-gun montage of 800 edits.  Both are supreme examples of sheer joy and elation.
Posted by Robert Kennedy at 9:37 AM