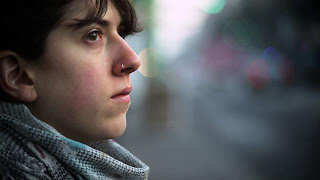 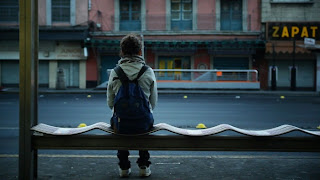 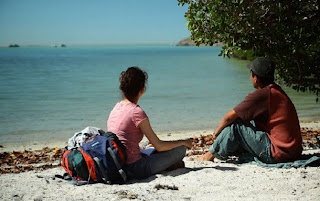 A small gem of a film that begins with the suffocating ennui of high school, where María (Lucía Uribe) is seen getting nagged by her overly intrusive mother, while she remains somehow aloof and disinterested from it all, even as she has bored sex with a few random boys.  She narrates, with childish illusion, the interior thoughts she writes to herself in a notebook, also drawing pictures, always offering a sunnier world than the one she’s living in.  Her description of herself in the third person always sounds strange, almost as if she’s referring to another person, but reflects an identity that is completely outside the existing world.  Initially this just feels young and innocent, like familiar diary entries, as a way of communicating to yourself when there are no other friends to talk to, but the significance grows once María inexplicably leaves home without a word and embarks on a personal journey with no apparent destination.  Beautifully shot by Ivan Hernandez using a handheld camera in a completely realist and unpretentious style capturing the natural world around her, from the busy streets of Mexico City to the vast countryside, where there’s not a false note anywhere in this picture, offering gritty images of daily existence, where the viewer is never sure if some horrible fate will befall this girl, as once she leaves home, she voluntarily places herself in such vulnerable positions and in harms way on a daily basis.  Part of the film’s intrigue, especially as this turns into a road movie, is not knowing where the journey is heading.

Written by the director, this is a compelling story, as initially little is known about María’s character, as she never really opens up, where even over time she is defined by a shy reserve, a girl who prefers to write her thoughts in a notebook, who barely utters a word throughout the entire film.  The wordless quality of the film is perhaps its greatest strength, as it relies upon character, the fascinating imagery, and her slowly written narrative curiosities that advance her perspective, where we are continually drawn into her world even as she remains out of reach.  This depiction of a character continually wrapped in mystery is unusual, as it sends mixed signals to the viewer, who have to sympathize with the girl for having the guts to make her own decisions, even as some of them feel cringeworthy as they develop.  Hopping on a bus out of town, she sits in a café having lunch when a chatty young mother (Olivia Lagunas) approaches her to hold her child for a minute, immediately taking off, where the scene plays upon the audience’s expectations, having a familiar feel, but then alters the perspective, changes gears, and moves in a different direction altogether, which is how this film plays out for the duration, each sequence defying preconceived notions.  When she sits in an all night café and an older man rather crudely tries to pick her up, good sense tells us to beware, but she goes home with the guy and sleeps with him.  Almost by accident, she runs into a fellow traveler, Juan (Roberto Mares), where they ride the same bus and spend some time together.  Much like her, he’s shy and introverted, presumably a good fit, as each are painfully lonely, where their quietly probing conversations, in the absence of any others in the film, feel profoundly moving.

The first time feature director has worked previously as a writer, editor, cinematographer, and made a few short films, but what’s unusual about this film is the severity of the character’s isolation, perhaps overcompensated by the visual poetry in the way the world around her is expressed, reminiscent of Lynne Ramsay’s MORVERN CALLAR (2002), which was largely an expression of grief, the aftereffects of a hauntingly personal loss.  Here María is a fairly typical middle class girl leading a normal life, where the source of her inner pain and distance is never really understood or defined, but the beauty of the film is the way her inner life slowly unravels before the camera, always hinted at through her journals, but finally reflected in the world around her when she reaches the ocean, where she sits in the sand under a tropical palm tree writing in her notebook and literally defies negativity.  The first time she reaches such an enchanted place, music is used for the first time in the film, but no words, just a few electronic chords from Andrés Sánchez that have the solemn and sacred feeling of church.  Shot without any lighting equipment, the film relies upon natural light, reflected in the country itself and its vast urban and rural landscapes, which in many ways provide the answers to this young girl’s quest for self-discovery, as it lies in Mexico’s roads and landscapes.  In contrast to the brutal, political crisis in Mexico right now, where drug wars and killings are rampant, the originality of this film is the unusual sensitivity displayed and lyrical tone captured by the director, beautifully conveyed by the vulnerability and quiet transformation of 18-year old actress Lucía Uribe, who the director has known since she was 11, but whose expression of alienation and longing permeate every frame of this film, where the unusual perspective of the final shot interestingly reveals María literally has to turn her world upside down to find what she is looking for.
Posted by Robert Kennedy at 11:53 AM