Beyond the Hills (După dealuri) 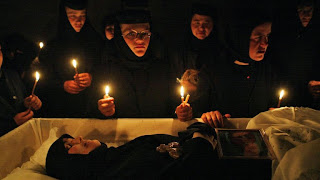 Mungiu has written and/or adapted a story inspired by the non-fiction novels of contemporary Romanian author Tatiana Niculescu Bran, a former senior editor of the Bucharest branch of the BBC News division, supposedly basing this story on real events, where there was also a 2007 stage version.  Despite its length, much of the film’s story remains shrouded under an ambiguous cloud of uncertainty, where little backstory is provided and the true nature of the two protagonist’s (both non-professionals) relationship is never revealed other than they both spent their childhood in a state orphanage, most likely subjected to systematic abuse.  When they left the orphanage, they apparently took different turns, where Voichita (Cosmina Stratan) has been fully accepted into a remote convent in rural Romania, which by embracing God seems to have given her a purpose in life, where a rhythm of life is established by observing a myriad of duties performed by each of the nuns in a collective spirit of worship and devotion.  Her friend Alina (Cristina Flutur) has other ideas, as she’s visiting Voichita with hopes of rekindling a former love affair where they could run off together.  Voichita is fully committed to God, however, but embraces Alina in her heart, as outside of Alina’s mentally challenged brother, the two of them have no living family, so they remain closely attached to each another.  It’s clear from the outset Alina has no interest in God or the monastery, but just wants her lover, while Voichita covers up her friend’s real intent and instead offers pleas to the Mother Superior and Orthodox Priest to have mercy on her as she has noplace else to go, proposing the idea that embracing God may offer what she needs, as it has for everyone else, which buys them some time together.

Alina, however, has a mean-tempered and violent streak, apparently exacerbated after being urged to offer a full confession, where the audience never learns the depth of inner torment she was forced to release, but her violent behavior afterwards offers a hint as to its toxic nature, as she starts cussing out and attacking some of the nuns, where they literally tie her in restraints to keep her from hurting anyone before taking her to the hospital where she is medicated.  Likely because there’s no monetary incentive, the hospital provides only the basic level of care, where much of this feels like The Death of Mr. Lazarescu (2005), as the hospital doesn’t wish to run further tests, even though there are signs she may suffer from schizophrenia, so they simply avoid responsibility by passing her back to the monastery, suggesting rest is what she needs.  This plays into the stereotypical view that monasteries are all about quiet prayer and reflection, but due to the rugged location of this particular religious community, much of their time is spent doing hard work outdoors.  Initially Alina is calm as she’s been prescribed medications, where she is compliant, and due to the urging of Voichita, makes feeble attempts to embrace God, but the obsession with sin, combined with the fact she likely stopped taking her medication, seems to drive her over the edge, where her instability is affecting the overall harmony of the community, so the Priest sends her back to her last foster family, but they’ve already replaced her with somebody else and literally have no room.  With their return once again, the Priest is running out of options.

What’s immediately apparent to anyone in the audience is that Alina does not belong in a monastery, but Voichita’s continual pleas to the authorities suggest otherwise, where she’s literally cramming God down this girl’s throat because she knows no other option.  This narrow view of religion seems to be the focus of the film—that people don’t really pray for others as they mostly pray for themselves, using religion for whatever selfish reasons they can imagine.  The Priest is no more interested in helping Alina than the hospital, as both just wish to rid of her, but instead of doing the charitable thing, which would be reaching out into the nearby community that they service and finding her a family or another church where she could stay temporarily, but instead both institutions exist in an island unto themselves, separate and apart from the real world.  Voichita is not the most educated and her attempts to help end up doing more harm than good, but her motives are well-meaning—she simply doesn’t know any better.  The film goes off the rails, somewhat, when the church's narrow views prevail, protecting their own interests, literally existing in their own mythology, completely abandoning common sense or a connection to modernity, becoming a backwater religion retreating to the 5th century by resurrecting ancient religious rituals, desperately performing an exorcism to drive the evil spirits out of Alina, whose only real sin appears to be continually questioning the legitimacy of God on earth, as in her life God’s mercy has been all but absent.  Shot in ‘Scope by Oleg Mutu, the winterized countryside becomes a fully realized, silent character in the film, as it provides much of the film’s compositional texture, where the visualized naturalism is starkly bleak, without a hint of music, as people wear winter jackets to sleep in, and every breath has an icy chill.  But the film fails to generate the same impact as 4 Months, 3 Weeks, and 2 Days (4 luni, 3 saptamâni... (2007), as the people onscreen are less compelling and not as disturbingly intense, veering into a state of melodramatic hysteria late in the film that just feels overly contrived and all too predictable.
Posted by Robert Kennedy at 11:41 AM