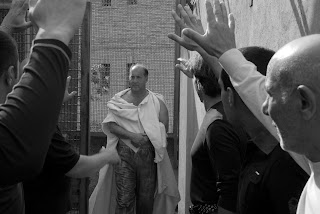 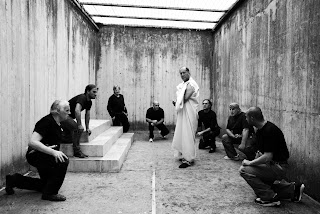 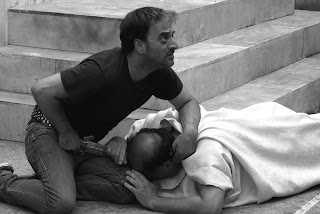 We hope that when the film is released to the general public that cinemagoers will say to themselves or even those around them… that even a prisoner with a dreadful sentence, even a life sentence, is and remains a human being.          —Paolo Taviani

It’s great to see the Taviani Brothers are back and still making relevant films, last seen in 1987 with GOOD MORNING, BABYLON a quarter century ago, but they have been working right along, writing and directing a few made-for-TV movies, but nothing on the festival circuit, so after winning the Golden Bear 1st Prize at Berlin, this was a pleasant and most unexpected surprise.  It was the Taviani’s ultra-realistic PADRE PADRONE (1977) that won the Cannes Palme D’Or (1st prize), the almost never seen IL PRATO (1979) launched the career of Isabella Rossellini, while the magical THE NIGHT OF THE SHOOTING STARS (1982), arguably their best work, won the Cannes Jury Prize (3rd place).  Known for their rugged Tuscany landscapes which are incorporated into their films, this film is shot entirely indoors, given a near documentary look as the filmmakers depict the preparations for a staging of Shakespeare’s Julius Caesar set inside the grounds of Rome’s Rebibbia maximum security prison, where many of the men who perform the play are imprisoned for drug trafficking charges, mafia related felonies, and murder, so perhaps it’s not surprising many inmates could channel the violence in their own lives to unlock parallels in the play.  Except for the final performance sequences which are in brilliant color, the interior prison scenes are all shot in black and white, where the film has a completely non-traditional and experimental design, mixing final footage of the staged play performed live with rehearsals and earlier audition reels which introduces us to several of the inmates eventually chosen to perform in the play.  The audition process is easily the most entertaining, as many of the inmates are over the top, literally pretending to act, trying to be Brando, while others are playfully themselves horsing around in front of the camera, while some are surprisingly natural, especially when asked to express anger.  Listed alongside their screen photos are the crimes they have been convicted of and the length of their sentences.

With 6 months preparation time, the process begins in a rehearsal room with the director, with each inmate herded back into their cells afterwards where they often continue practicing while confined, or when gathered in small groups in a recreation area.  Often they would veer off script, adding some choice line from their own personal experience that at least for the moment impacts upon the scene, a kind of jailhouse improvisation used to get into character.  Using Italian dialects instead of Shakespeare’s English, the speech used is what we hear everyday instead of ancient text in Iambic pentameter, where inmates could largely be themselves, some with incredibly expressive faces.  Often using long takes from cinematographer Simone Zampagni, many linger on inmates as they exchange dialogue or are seen rehearsing significant scenes, both in and out of character, where this fuses fictional moments into the play, altering the style and rhythm of a historical drama and turning it into a work breathing with the life of the participants, as if this is the telling of their stories.  This heightens the artificiality of performing a play, where the staging of the work in and around the confined prison space is highly inventive, creating a fascinating tension beneath the surface of the film, where some of the more significant speeches from the play, presumably to a large assembled crowd of friends and Romans, are simply set before a lone window of the prison which offers a view looking out, where the claustrophobic cells and recreation areas, for all practical purposes, become the Roman Forum and the Senate.  The directors take liberties with one character, Salvatore Striano who plays Brutus, as he is a former convict who was pardonned from Rebibbia in 2006 but participates as if he were still an inmate.  Certainly one critique with the final product may be with the lushly romanticized saxophone score from Vittorio’s son GiulianoTaviani which might sound more appropriate in Bertolucci’s LAST TANGO IN PARIS (1972).

While called Julius Caesar, the play is largely about the insurrectionist actions of Brutus, who conspires to assassinate the Roman leader, eventually tracked down and defeated by the Roman army at the Battle of Philippi.  Brutus is the psychological study of a man who undertakes a shadowy role destiny never intended for him, becoming a man with a dual nature, as part of him will be forever linked to Caesar, certainly bearing the ghost of Caesar after stabbing him to death, which immediately starts taunting him, as if cursed by his own deed.  Many consider him among the greatest figures in Shakespeare, while others cannot conceal their contempt for him, yet Antony (his enemy) had nothing but high praise, “This was the noblest Roman of them all,” a stark contrast to the imperious Caesar, who was reviled for his ruthless ambitions.  It was Caesar’s target of the Roman Senate that forced Brutus’s hand, where morally he feels compelled to act on the corrupting influence of unchecked power.  Giovanni Arcuri is quite convincing as Caesar, a towering figure in physique as well, easily seen as imposing on the battlefield, while Antonio Frasca as Mark Antony gets to deliver the most famous passage from the play, his funeral oratory, while standing next to the corpse of Caesar, but directed towards a starkly bare prison window, which has a positively chilling effect. Cosimo Rega plays the Iago-like Cassius, another conflicted character, as he seems to drive the actions of Brutus and his compatriots from behind the scenes, perceiving “something in the air,” but he convinces Brutus that murder is paramount to patriotism, a view that continues to resonate today when jihadists or other so-called national liberators are also commonly called terrorists.  It is Rega, a 20-year inmate, who is given the last word on this play, returning to his cell afterwards where he utters, “Since I have known art, this cell has become a prison.”  Certainly this eye-opening account by the Taviani’s challenges our view of humanity and history, where we often demonize our enemies, including the prison population, who account for themselves admirably here.
Posted by Robert Kennedy at 12:05 PM