If I Want to Whistle, I Whistle (Eu când vreau să fluier, fluier) 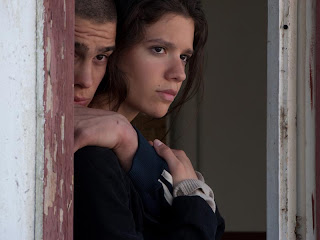 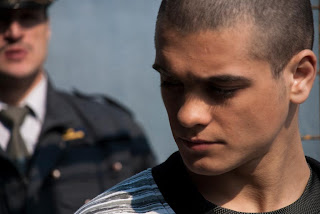 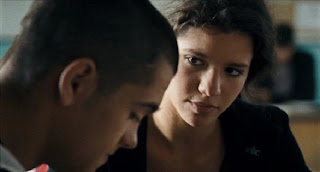 (After Ceauşescu), Romania passed through some very difficult phases, (where the country) didn’t have a natural elite that could lead us to a better model of society. It’s difficult to pass from a communist to a capitalist model when the major part of the society doesn’t understand what is happening. A large proportion of the Romanian population is the elderly and what we tried to show in the movie is this separation between parents and children. Due to economic hardship, many Romanians are forced to go overseas and they leave their kids behind. This creates a lot of problems, as the kids are raised by their grandparents.      —Cătălin Mitulescu, co-writer and producer, also a fellow director

We tend to forget that Romania is the country of Eugène Ionescu, a modernist playwright and one of the foremost founders of the Theater of the Absurd, where one of the tenets of the 20th century is finding no outlet for personal expression, where behind the Iron Curtain Czesław Miłosz writes about the enslavement of the consciousness in his book The Captive Mind, a reflection of the strain and mental anxiety on the populace that accompanies the political repression of a totalitarian police state, also reflected in the world of Kafka, who never finished any of his full-length novels and burned 90 % of his writings, but had a habit of placing his protagonists at the mercy of an unnamed oppressive system that repeatedly forces the individual to capitulate to suffocatingly strange and bizarre acts, where sanity manifests itself as insanity in an insane society.  This mindset sets the tone for this film, most all of which takes place inside a prison, a youth detention center where non-professional actor George Pistereanu is Silviu, an 18-year old inmate who has just two weeks left in serving his 4-year sentence before he is released.  But rather than focus upon his freedom and his potential liberation, his negative behavior if anything intensifies, as if the tension of his upcoming release reveals itself in self-destructive behavior.  Marius Panduru, who has shot several of the Romanian New Wave films such as 12:08 EAST OF BUCHAREST (2006), POLICE, ADJECTIVE (2009), and the more recent Loverboy (2011), also starring the two leads of this film, uses long takes and hand held shots, accentuating the grim and colorless interior environment juxtaposed against the outside grounds which catches the bright sunlight, where the prison work detail actually works outdoors in relatively pastoral fruit orchards.  The distinguishable mood between the two worlds is pronounced, as inside inmates are subject to the continued presence of armed guards, confined and claustrophobic spaces, and an inescapable lock up, while on the outside grounds they’re free to play soccer or mingle casually with one another, seemingly unmolested by the guards.

Despite the setting, this isn’t a prison movie, as the authorities are fairly lenient, the guards have a good relationship with the inmates, and the oppressive force is not the prison system itself, but the idea of freedom.  The only world Silviu understands prohibits his freedom, keeping his frustrations and emotions in check, where he isn’t just physically incarcerated, but intellectually and emotionally powerless to effect his own future, where he has little to no education, no work experience, and a future that seems decidedly bleak.  Silviu has a younger brother that comes to visit, notifying him that their mother has returned and wants to immediately take him with her back to Italy where she works, something Silviu is not comfortable with.  When his mother (Clara Voda) comes to visit, it sets the stage of family dysfunction, where Silviu doesn’t want what happened to him happen to his brother, where his mother dragged him around with her until she found a boyfriend and then sent the kid away to fend for himself, a pattern of neglect that persisted throughout his childhood to the point where Silviu pretty much grew up without a mother, and personally raised his little brother himself.  So her sudden arrival has ominous overtones, where Silviu literally flips out at the thought that he’s powerless from inside the prison walls to stop her, so can only make violent threats, as in his head, he blows this up to gargantuan proportions, as he has no conception of the possibilities that exist in the world outside.  What this film points to is in the past two decades, several million Romanian workers have sought migratory work in Western Europe, mostly in Italy and Spain, picking seasonal crops or working construction, leaving behind hundreds of thousands of kids who grew up without their parents, a whole generation of disaffected kids who do whatever they damn well please (thus the title) because there was no one there to stop them.

Adapted by the director from an Andreea Valean play that was developed in workshops with youth offenders, using actual inmates in the film to enhance the authenticity of the atmosphere, this is largely an interior psychological exposé, where instead of being hopeful about the future, something the audience likely feels, as it’s what they would be looking forward to, Silviu obsesses over his grim prospects unless he can keep his little brother with him, the only person in the world apparently that he cares about.  With no musical score, the weight of the film falls on Pistereanu’s shoulders, where the taunting from fellow inmates grows brutally intense, knowing he can’t fight back or risk losing his release, his brooding silences and violent eruptions reflect his unease and growing instability, yet we sense the guy has good intentions, but simply no way to express them. When prison counselors attempt to interview the inmates, what catches their eyes is an attractive young woman Ana (Ada Condeescu), where Silviu is obviously interested in more than just filling out a survey, intentionally evading the answers, but she deftly moves on to another.  In his mind, however, she becomes the symbol of all the good things in life that he’ll never have, which becomes a growing irritant in his head, looming large especially as his sense of desperation with his family literally explodes into a rage of unleashed violence, where he simply loses it, grabbing Ana as a hostage, where the seriousness of the moment is undermined by the utter absurdity of his thought process, where he starts relishing the attention of being a fuck-up.  Perhaps this is the only mentality he truly trusts and understands, creating a wild diversionary situation so he can have one final moment of control, perhaps one human being he can talk to, before he once again loses his freedom, this time likely in an adult prison.  As he comes to terms with the utter hopelessness of his real future, life goes on as if nothing has happened, as the world spinning round never even bats an eye.
Posted by Robert Kennedy at 8:43 AM