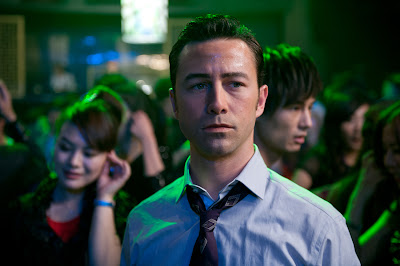 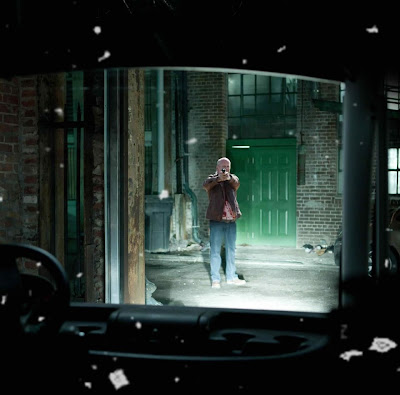 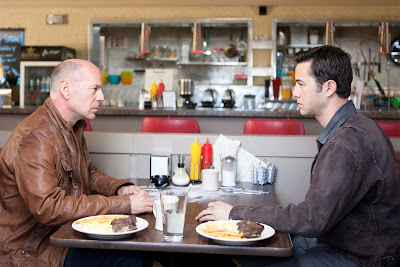 This film steals from at least a dozen or more different movies, but does it with such relish that it hardly matters, literally inventing a futuristic world on a relatively modest budget, where the film features plenty of satiric wit, sardonic dialogue, weird character development, and constantly changing storylines that will keep the audience guessing what’s happening next, with a few mind blowing moments, used effectively in the context of this particular story.  Like the two other Rian Johnson films, BRICK (2005), still his most original feature, and THE BROTHERS BLOOM (2008), LOOPER is utterly entertaining, a real popcorn movie, cleverly making use of genre forms as if the director is trying to amuse himself, where it just feels like everyone had a blast making this movie, as there are special effects sequences, but also scenes that rely exclusively on wit and originality, where the entire movie is a game of cat and mouse, as the mob is always chasing after somebody.  Set in the year 2044, prior to the invention of time travel, which occurs 30 years into the future and is immediately banned but taken over by the mob, who invent a foolproof system of taking care of their undesirables, as they tie the victim’s hands behind their backs, place a hood over their head and send them off in a time machine, like PRIMER (2004), where they arrive at a designated time in the same exact location in a rural area next to a cornfield, like the New Jersey Turnpike of BEING JOHN MALKOVICH (1999), where they are immediately wasted by hired killers, known as loopers, as they extinguish bodies in the past so they don’t exist in the future.  These loopers have it tough, because in 30 years, they themselves will be sent back, closing the loop, so to speak, covering their tracks, so there is no evidence connecting any of these assassinations to people that don't exist.  Joseph Gordon-Levitt, who appeared in both earlier films by the director, plays Joe, a completely unphased looper, the kind of guy that doesn’t let anything get to him, who spends most of his time getting high and chasing after strippers, one of whom, Suzie (Piper Perabo), he may actually care about.

Like BLADE RUNNER (1982), the future has a dreary and dilapidated look about it, as if everything runs on second hand parts, where there are futuristic motorcars that ride off into the air, but the retro look resembles 1950’s motorcycles, where loopers for that matter, bear a resemblance to blade runners who are forced to track down replicants, where the world would be in constant danger if they didn’t.  Joe immediately comes under suspicion when the operation learns he’s harboring an agent (Paul Dano) that failed to carry out his mission, who couldn’t pull the trigger when he realized the guy he was supposed to kill was himself in the future.  Jeff Daniels as Abe is the world weary head of operations, a guy sent back from the future to run things smoothly, who has a friendly enough manner, but can also be ruthless in order to make his point, where like JUDGE DREDD (1995), he uses a hammer instead of a gavel breaking the hands of his fellow miscreants when they step out of line.  Joe has an interesting habit of visiting a coffee shop near the cornfield, where he practices French on the waitress Beatrix (Tracie Thoms), thinking he will live in France once he’s retired with exactly 30 years left to live.  What happens instead is the same thing that happened to his friend, as he’s stunned to see himself as the man to be executed and he hesitates, leaving both the old and the new versions of himself on the run like rats in a maze.  The man he evolves into is Bruce Willis as Old Joe, who ends up in China instead of France, discovering the love of his life, Qing Xu, living a few idyllic years together before his 30 years are up.  Right out of THE TERMINATOR (1984), Old Joe vows to change the past so that he and his wife may live together on into the future, but to do that he must execute the boss man of the future, known only as the Rainmaker, where little is known about him, so it’s hard to trace his past, but he’d be alive during Joe’s era. While Old Joe is focused on what he needs to do, he’s continually thwarted by trying to keep young Joe alive, as he’s a completely undisciplined hardass who refuses to listen to anybody, even himself in the future.

While Abe has a constant surveillance network out looking for the two Joe’s, young Joe has crawled through the cornfield to a farm on the other side, where Emily Blunt as Sara, a rifle-toting farmgirl, pulls him out barely alive and strung out on drugs.  Blunt may be the best thing in the movie, as this perfectly fits her cool reserve, as she’s fervently protecting her young son Daniel (Kamden Beauchamp), as if she’s hiding from the world as well.  Daniel is an extremely inquisitive but hard headed kid who’s bright but doesn’t follow instructions at all from his mother, as he pretty much does whatever he pleases, inquiring about guns from Joe, while Old Joe has narrowed the Rainmaker down to 3 children, tracking each of them down, one of whom is Daniel.  But first Willis has to take on the entire network of Abe’s men, turning into Bruce Willis, the one man wrecking machine from DIE HARD (1988), continually shooting and blowing everyone up.  Meanwhile, one of Abe’s men has visited the farm and is asking questions, instead finding Joe there, but Daniel flies into a rage that resembles THE OMEN (2006), where we realize he may literally be the devil incarnate, using tele-kinetic forces that defy gravity, moving objects at will until they’re floating in air, much like INCEPTION (2010), which also starred Gordon-Levitt.  Basically the writer/director has a blast creating a sci-fi funhouse thriller that defies expectations, continually discovering new grounds, mixing set pieces with onsite rural locations, changing the visual focus, rotating what characters are featured, but always getting excellent performances from the principal characters, turning this into a rollicking ride that continually offers more surprises.  Brilliantly mixing genre sequences, Johnson has turned into one of the more creative writers on the American front.  While this has a more playful feel than something to be taken seriously, it’s still well executed, continually using the power of the imagination over high tech special effects.  The effects are there, but the originality shown throughout is much more appealing.
Posted by Robert Kennedy at 9:08 AM