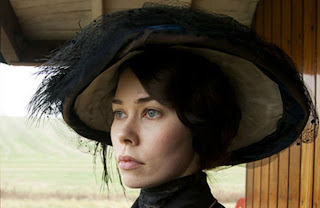 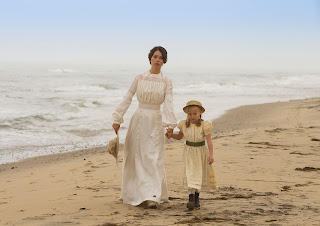 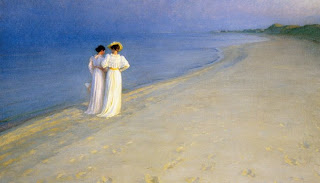 A picturesque but utterly conventional costume drama, based on the 1999 Anastassia Arnold novel The Passion of Marie, the film is the director’s first Danish production in 25 years.  Set in the northernmost part of Denmark known as Jutland, the nation’s largest fishing community, Skagen was also a haven for open air painters in the late 1870’s to the turn of the century due to its proclivity for quality Nordic light, where P.S. Krøyer (Søren Sætter-Lassen) became Denmark’s most famous painter.  As his wife Marie (Birgitte Hjort Sørensen) was the subject of many of his paintings, the most famous is likely Summer Evening at Skagen Beach – The Artist and his Wife, she became known as “the most beautiful woman in Europe.”  Shot by Dirk Brüel on locations in Skagen and Marstrand, the couple becomes the epicenter of the nation’s cultured society, where all the great figures wish to be painted by Krøyer.  Under the surface, however, we soon discover he has disturbing fits and spells where he is prone to violence, brought on apparently by manic depression and syphilis, not mentioned in the film, but the same illness that likely killed Baudelaire, Frederick Delius, Gauguin, van Gogh, Nietzsche, Franz Schubert, Bedřich Smetana, Édouard Manet, and Toulouse Lautrec, among others.  Rather than focus on the genius of the painter, who we learn very little about, the film instead focuses in the unfulfilled inner life of his wife, who also attempted to paint, but her husband never thought she had sufficient talent.  While Sørensen is attractive, she remains coolly aloof throughout, properly distant, apparently, rarely expressing any genuine emotions, which is how women of the era are typically portrayed, usually overdressed, wearing collars covering their necks, where they are literally suffocating in corsets.  But this film fails to live up to the standards set by the German Effi Briest adaptations, both the Fassbinder 1974 version and the updated 2009 adaptation by Huntgeburth.

This change of course to ignore the lead artistic character, perhaps the point of interest for most viewers, and follow the sexual exploits of the wife leads to a seemingly predetermined path, as her husband is constantly the center of attention, but due to his disturbing illness, where his moods can swing in an instant, he’s becoming a scandalous embarrassment, where Marie feels as if all the life is being choked out of her trying to protect him.  As she has a daughter to think about, she often feels their life together is slipping away.  All that changes when she meets Swedish composer Hugo Alfvén (Sverrir Gudnason), seen in a gallery taking an interest in her husband’s work, meeting again sometime later in Italy while her husband was undergoing treatment, where he can’t take his eyes off her.  Falling madly in love, she finally wants out of her marriage, which her husband refuses to grant, where Alfvén actually makes wildly unorthodox official visits to their seaside estate with the husband desperately hoping their desires will soon cool, but they end up running off together to live in Sweden.  Marie believes she’s finally found happiness, sacrificing her daughter and her reputation in the process, shifting much of the scandalous attention to herself, as her husband refuses to allow her to leave with her mother.  As Denmark’s most celebrated woman, she pays a huge price in marital disgrace, becoming the nation’s most despised woman (a small detail largely left out of the picture), especially after moving to Sweden of all places.  Much of her life is depicted as Nora in Ibsen’s A Doll’s House, where her own life is one of stifling restriction and involuntary sacrifice, a far cry from the unlimited freedoms enjoyed by her more infamous husband.  While the film is gorgeously photographed, there’s little spark generated between the characters, where their lives literally feel glossed over, never getting under the surface.  While always attempting to portray Marie in the most sympathetic light, as if she was staunchly independent for her time, by what we see onscreen remains a relatively unsympathetic character.
Posted by Robert Kennedy at 11:16 AM