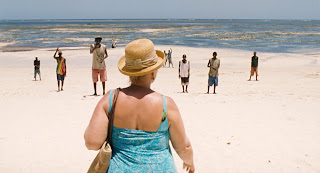 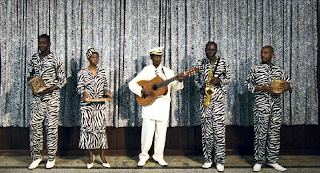 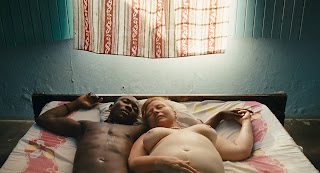 Austrian filmmaker Ulrich Seidl has cornered the market on miserablism, making films that are guaranteed to make the audience feel uncomfortable, and unlike his compatriot Michael Haneke who dabbles in violence and horror, where FUNNY GAMES (1997) was intended to drive people from their seats in droves, Seidl uses strictly human qualities to make people squirm.  Seidl’s specialty is humiliation, where characters are intentionally forced to feel debased and humiliated, and the audience in turn is forced to endure it as well.  At festivals, there are usually many walkouts that accompany his films, as not everyone is willing to sit through what feels like a marathon session in human degradation.  But what gets his films invited to festivals in the first place is the social relevancy and consummate form of his films, where the line between truth and fiction is blurred somewhat, but his films are grounded in a documentary style objective truth.  PARADISE:  LOVE is a departure for Seidl, as it’s his first venture outside Austria and Europe, where he ironically follows a small group of single, oversized, middle-aged Austrian women to a vacation resort on the sunny beaches of Kenya in Africa, led by Teresa, Margarete Tiesel in a fiercely brave performance, who stashes her daughter and cat with a friend before heading to paradise in search for love.  The opening sequence, however, gives us a glimpse of Teresa at her normal job, supervising a group of developmentally disabled adults on a demolition derby field trip excursion of ramming each other in bumper cars.  It’s clear this challenges the audience’s view of what’s considered strange, a lead-in to the showcasing of oversized women in their typical beachware.

There are certainly parallels to this film and Laurent Cantet’s HEADING SOUTH (2005), which takes place in an upscale resort in Haiti, as both examine sex tourism by affluent white women in exotic black locales, where women literally purchase young boys for the sleek look of their bodies and for sex.  While Cantet views the work as violating child labor laws and also explores the colonialist impact, where the poor are manipulated into unspeakable actions, enhanced by their need to survive, where from their position of powerlessness they overcompensate by becoming tradable commodities in human flesh, Seidl avoids the political ramifications and seems content to let the audience view the experience largely through Teresa’s eyes.  Unfortunately, this choice determines where Seidl points his camera, as he’s a brilliant observer of minute details, but he avoids the political and sticks with what he’s familiar with, as the European women are there largely to indulge themselves.  Much of what we see seems absurdly ridiculous, where up until the finale, much of the audience was in stitches with laughter, as these women certainly objectify the black male anatomy, where in their minds these are boy toys, where they can pleasure themselves night and day with whomever they choose.  Teresa meets a fellow Austrian woman at the bar, Teresas Freundin (Inge Maux), who can’t stop gushing about the carnal opportunities at this resort, where there are young boys everywhere hawking their goods, where sex is for sale along with the bracelets and necklaces they carry with them to entice the women.  A walk to the beach immediately reveals the class barriers, as the young beach boys are restricted to standing in the sun like statues on the other side of a rope separating all the resort patrons who are more comfortably lying in the shade next to the pool.

Teresa, in typical Austrian fashion, is used to a customary order in her home and nation, where in no time she has these African beach boys following her instructions, as ludicrous as that may be, as she offers primary lessons on how to fondle her breasts, gently stroke and not grab, French kiss, not using too much tongue, until they eventually learn to give her what she wants.  After an initial disappointment with one kid, she discovers the amorous touch of Munga (real life beach boy Peter Kazunga), with Tiesel seen in various states of nudity throughout, actually developing an emotional connection with this kid, or so she thinks, until she’s lured into paying extra cash for various family ailments, all of which appears to be part of the two-sided exploitation game.  Once he’s played her for the cash, he moves on, but Teresa can’t let him go, wanting more, believing with money she sets the terms, but this is an extension of colonialist thinking.  Once she realizes how she was scammed, she finds him on the beach and literally pulverizes the poor kid in a state of rage.  The film is really an exposé on human depravity, revealed with stark honesty, using nudity as a provocation, exploring the depths of just how far people are willing to go when staring in the face of loneliness and poverty.  Despite Teresa’s newfound understanding, the women continue to look for human sex toys, where their real interest is continually pleasing themselves, often humiliating others in the process, but this hardly matters, as they’ll never see these kids again after the vacation ends, but they will have to live with themselves and their own aberrant behavior.  Perhaps the most humiliating ordeal of all is hearing Teresa’s pathetic attempts to call her daughter on her own birthday, but her daughter refuses to call her back, leaving her alone and emotionally devastated at the end, where the real love she needs is never reciprocated.
Posted by Robert Kennedy at 11:55 AM