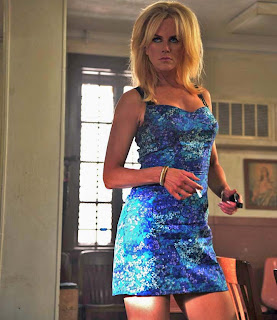 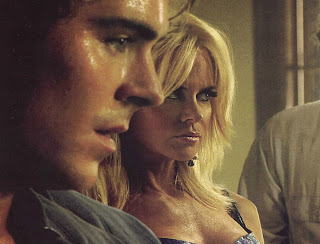 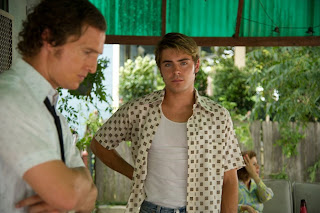 The recipient of some of the worst reviews in print, a train wreck alleged to be one of the worst and most forgettable films of the year, this is instead a highly entertaining and juicy film noir, a candidate for a spot on John Waters Top Ten films of the year, with enough repressed sexual dysfunction and lurid southern atmosphere to rival any Tennessee Williams play.  Reportedly offered to Pedro Almodóvar as his first English-speaking feature film, after toying with the screenplay he eventually declined, but certainly the raunchy tone of the material is there, based on a novel by Pete Dexter who along with the director helped adapt the screenplay, which is unashamedly trashy, B-movie material.  Some may find the boundaries of bad taste pushed to the fullest here, yet that is the point of the film, that people require their “news” to be sanitized and cleaned up beyond description so that it is no longer recognizable from its origins, where truth is a virtue that exists only in concept, as there are so many powers in play desperate to spin and alter the news to suit their readers.  While there is no attempt to add sanctimonious morality or a message to this film, but this is ascertained strictly from the title of the film, and as it concerns a family where the patriarchal father (Scott Glenn) runs a newspaper.  Set in a small town in Florida (though filmed in Louisiana) during the late 60’s when New York Congresswoman Shirley Chisholm can be seen delivering a speech on television, where by the early 70’s she was one of the founding members of the Black Congressional Caucus and even initiated a bid for the Presidency in 1972, surviving several assassination attempts, running as the ideological opposite of race segregationalist candidate from Alabama, Governor George Wallace, whose picture may be seen on the walls of law enforcement officials.  This sets the scene for the existing racism that routinely exists in the region, where Macy Gray steals the thunder from some of the bigger names, playing Anita, the family maid, who takes the place of the missing mother to Jack (Zac Efron), an impressionable teenage kid just out of high school who also happens to be a paperboy.

Like a modern day MILDRED PIERCE (1945), Anita opens the film awkwardly recounting her personal recollections of a local murder to a journalist, where the film is a flashback of colorful events that she continues to narrate throughout, often with a bewildered amusement.  Jack’s older brother is Ward, Matthew McConaughey, working for a Miami newspaper, returning to his home town accompanied by a fellow black reporter, Yardley (David Oyelowo), supposedly from London, where both are following the information offered to them by Charlotte, Nicole Kidman, who believes the convicted murderer is innocent.  Kidman, channeling Karen Black from FIVE EASY PIECES (1970), who interestingly did all her own hair and make up due to budget restraints, is wonderful throughout as an oversexed Barbie doll who writes letters to convicted criminals, becoming especially infatuated with the letter of the cop murderer, Hillary Van Wetter (John Cusack), believing she has finally found true love.  When this motley crew visits the prisoner, the over the top sexual explicitness of the visit is unprecedented, where Charlotte literally gives herself to him, though there is no touching.  Her sexual bravado instantly endures her to Jack, who’s never seen anything like her, who thinks of her constantly as the woman of his dreams, where she literally becomes his wish fulfillment fantasy.  But instead she instantly befriends Jack, like a little brother, whose coming-of-age experience may actually be the film’s central narrative.  Early in the film big brother Ward drives the action, where his regional knowledge allows him to understand the backwards gutter mentality of many of the local good ‘ol boys, where sleaziness is something they all seem to have in common, though Yardley finds this particular local attribute somewhat pathetic, where his education has allowed him broader views, but so many residents in small towns only know their own regionalism, as for them, no outside world exists.  Jack interestingly makes the news in amusing fashion, where after a candidly sexual conversation with Charlotte at the beach, he takes a swim and gets repeatedly stung by jelly fish, where the instant cure is urination on the affected areas (similarly expressed in a Friends episode where Joey steps up to the plate and rescues Monica), which Charlotte publicly and heroically performs, making all the editions published by his own father.

While some of the best scenes exude personal familiarity between Anita and Jack, it’s also clear the murky atmosphere under the surface is seething with a suffocating claustrophobia, often retreating into the swamps for more local color, as every character in the film has been seriously damaged in some deeply affecting way, where Jack follows his brother’s footsteps until Ward gets into a heap of trouble where he barely makes it out alive, the victim of some starkly graphic, criminally inspired, brutally sadistic gay bondage, literally forcing little brother to assert himself more due to his medical circumstances.  Jack is the victim of the prevailing racial attitudes where he stupidly embarrasses himself in front of Anita, but also carries the baggage of abandonment issues due to the loss of his mother, while Ward is on a self-destructive bent driven by his inability to accept the fact he’s gay. Charlotte has such a low degree of self-esteem that she hangs on literally every word of some of the lowest and most depraved men on earth, driven to the point of delusion by her need to be desired by men.  When Jack offers his love, she sees it as little more than child’s play.  Yardley, like a modern day Mr. Tibbs, is forced to take advantage of job opportunities that have routinely been denied blacks, even if it means stepping on the backs of others to get there, losing his moral compass in the process.  Hillary Van Wetter, on the other hand, is a swamp creature that lives with the alligators, snakes, and incessant swarm of bugs, a primeval force of nature that we’ve come to accept in Robert Mitchum’s roles in The Night of the Hunter (1955) or CAPE FEAR (1962).  Brought together by uncommon circumstances, they all seem to bring out the worst in one another, where the insidious nature of man is portrayed as little more than that of lowly animals, where it’s questionable who we are and what we’ve evolved into.  The film is more interested in capturing the right tone and atmosphere, like CHINATOWN (1974) set in the swamps, filled with Mario Grigorov’s original score and a collection of standard R & B hits from the 60’s, where the interplay between characters is interesting and often hilarious, leading to an unvarnished and uncompromisingly thrilling finale, where the unexpected raises its ugly head and proclaims victory, where many of us may be wondering what happened, and how did all this rarely seen material suddenly appear before our eyes?  Daring and devious throughout, where Kidman especially is another force of nature onscreen, credit is due for having the fortitude to approach this material head on without studio imposed concessions.
Posted by Robert Kennedy at 10:05 AM