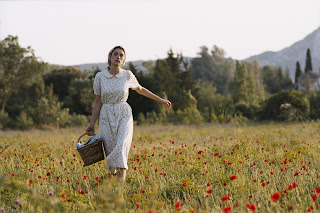 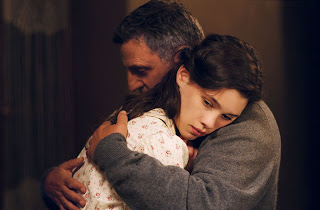 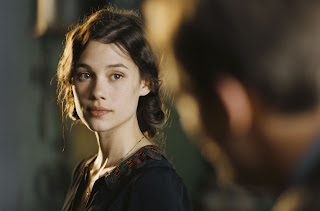 Katherine, Katherine
Why these bitter words
Why words that pierce my heart
I have given you my whole heart
Katherine, don't forget

Katherine, Katherine
What have you come to say
These words that are breaking my heart
You have no idea of the pain you cause
You are not thinking of it
Because you, yourself, have no heart

Ungrateful Heart
You are taking away my life
All is over now, between us
And I shall not think of you any more

Daniel Auteuil captured the world’s imagination 25 years ago in Claude Berri’s skillful cinematic adaptations of two Marcel Pagnol novels taking place in rural Provence, where two cynically scheming farmers attempt to defraud a newcomer out of their property starring in JEAN DE FLORETTE and MANON OF THE SPRING (1986), shot together in what were at the time the most expensive French films ever made, doing much to promote tourism in the region.  Auteuil, in his first feature film as a director, returns to the same pastoral region in the south of France where he spent his own childhood.  While Auteuil adapts another Pagnol story, this is a sweeping romantic war movie that focuses much of its attention on class differences, where Auteuil is a well-digger, the widowed father of six daughters during the outbreak of World War I, where despite his co-partner and best friend Felipe’s (Kad Merad) interest in his oldest and most beautiful 18-year old daughter Patricia (Astrid Bergès-Frisbey), hatching marital designs to keep her nearby, she instead falls deeply in love with a wealthy merchant’s son Jacques (Nicolas Duvauchelle).  Unbeknownst to her, he’s also a stunt pilot performing at an air show, where Felipe invites her to come along one afternoon, intending to propose to her, but instead she runs off with Jacques for a quick rendezvous while Felipe plies himself with liquor.  Spurning the young pilot’s advances, Patricia runs away in the heat of passion, confused and angered by his forward actions, but Felipe is too drunk to drive her home, relying instead upon the good graces of Jacques, a handsome young man on a motorbike who can’t help himself en route.  Her beauty and youthful innocence are irresistible throughout, especially as seen through the eyes of her own father, sent away and educated in Paris until returning home when her mother died, speaking a different dialect than the locals, seen as a princess, an angelic presence on earth.  The entire area is a sumptuously beautiful, sun-drenched pastoral region that literally shimmers in the light, where the angelic idealization defies the essence of what’s human, as she quickly discovers she’s pregnant.

A remake of a beloved, near three-hour 1940 film made by Pagnol himself, this is a simplistic and often overwrought melodrama, but the cast is superb, especially the two fathers, Auteuil and Jean-Pierre Darroussin as wealthy store merchant Mr. Mazel, as their economic perspective on their own children couldn’t be more different.  Mazel has an oversensitive wife, Sabine Azéma (current spouse of Alain Resnais) who’s afraid to lose her son, finding women’s attention to him purely economically driven, while Auteuil listens to a lushly romantic operatic piece by Caruso that used to make his own wife cry, Salvatore Cardillo’s “Core ‘Ngrato (Ungrateful Heart)” Enrico Caruso - Core 'ngrato  YouTube (5:27).  This heavily dramatic music interspersed throughout is a beautiful touch of period nostalgia, as it reflects not only Auteuil’s feelings about his deceased wife, but also, as it turns out, his own daughter.  Jacques is immediately called off to war as a fighter pilot before realizing Patricia is carrying his child, sending his own mother with a written note to meet her at a designated location instead, but the mother burns the note and never utters a word, leaving Patricia in a state of abject despair, believing she’s been humiliatingly rejected.  Forced to tell her father, his sense of honor requires that he dutifully round up all his daughters for a formal visit to Mr. and Mrs. Mazel, revealing their son is the father of Patricia’s expectant child, which the Mazel’s feel is little more than an attempt at forced bribery, sending them away at once.  Auteuil’s indignant response is to suggest Mazel may be a seller of tools, but he certainly doesn’t know a thing about how to use them.  Auteuil immediately considers his daughter a lost child and sends her away to live with his sister, refusing to think of her as his daughter anymore.  This kind of devastating humiliation and shame go hand in hand with the pride of the lower class, who want no favors from the rich, who believe they have to handle their own problems themselves without the interference of others.  Auteuil’s views on women are less than respectful as well, as he’s wildly paternalistic, ruling with an iron hand instead of any real understanding, which likely reflects a rural farmer’s view, where daughters are still thought of as prospective wives rather than as worthy individuals.

When Jacques is shot down behind enemy lines, presumed dead when his plane goes up in flames, Auteuil reveals little sentiment, where pride can be a difficult thing, more far reaching than he realizes, becoming a wall between himself and his most favored daughter, actually more of a game he plays than any resemblance of true feelings.  Nonetheless, he goes over the top in fury when his next oldest daughter secretly pays a visit to Patricia in exile, having delivered a healthy son which, without a father, has been given their own family name, something Auteuil takes very seriously.  Fuming like a man possessed, he decides to pay her a little visit of his own, but after a bit of righteous indignation, largely for show, he’s instead swept off his feet at seeing his first grandson.  Even the Mazels come around and pay Patricia a visit as well, hat in hand, largely apologetic about their earlier dishonorable rush to judgment, also taken aback by a newborn grandson who may help fill the void of losing their son.  While Auteuil continues to mistrust their intentions, feeling the rich haven’t a clue of what’s actually useful and instead indulge this child with an excess of things he doesn’t need, feeling all along their secret intentions are to gain custody of this child for themselves, Patricia is glad for their help and is happy for their involvement in raising her child.  This being a war drama, rapidly changing events on the ground lead to a surge of victory, which also expresses itself in melodramatic twists of fate, with predictable results.  While there is no sign of war anywhere in this film, instead signs are shown via smoke churning locomotives and tearful train station scenes of departing and arriving soldiers, where life in the idyllic, pastoral countryside has an inherent charm of its own that feels timeless, where the land is larger than the people who inhabit it.  Nonetheless this film explores a few of the characters, including their fiercely individualistic attitudes toward each other, often antagonistic, but ultimately humane.  While Auteuil loves to paint in broad strokes, featuring bold and richly vivid colors from cinematographer Jean-François Robin and soaring music by Alexandre Desplat, it’s his flair for shaping such a deeply internalized understanding of these characters and the rural Provence region that ultimately satisfies.
Posted by Robert Kennedy at 10:26 AM