The World Is Funny (Haolam Mats'hik) 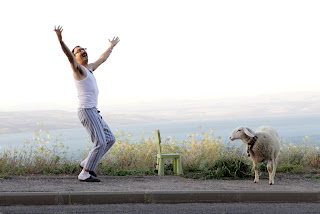 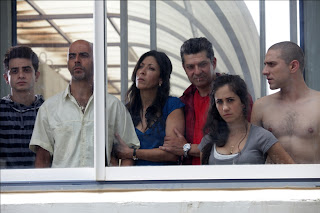 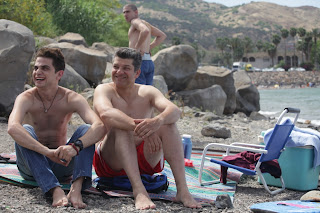 Damned if I know, the world is funny so I laugh.   —Gashash, Israeli comedy trio

One of the more convoluted narratives you’ll ever find at the movies, where the film itself is an amusing play on language and culture, weaving together various strands of people’s lives, utilizing twenty or more characters, all of whom are missing something essential.  The director is also a novelist and accomplished screenwriter, digging into Israeli culture to examine the influence of the comedy trio Gashash, the most influential comedy act in the history of Israel, suggesting comedy is a an outlet for dealing with the anxiety of living in the Middle East.  Shot in Tiberias, a town in the northern region known for always being sunny, constantly referenced by the comedy trio, where Golan (Eli Finish) runs a radio show that pays tribute to the Gashash, doing bits and pieces of their act on the air as he broadcasts classic skits that are filled with clever, rapidfire wordplay.  Assisting him on the show is Zafi (Naama Shitrit), as both of them know the skits inside and out, where she also becomes the film’s central narrator, participating in a writing workshop at the town library, which is a wonderfully inventive device, where she is renowned for devising stories with no end.  Without any real narrative, Zarhin instead mixes together vignettes, flashbacks, oral stories, and parts of people’s lives as the connecting tissue of the film, where much of this seems to connect a single family together, several of whom haven’t seen or spoken together in nearly a decade.

Yardena (Assi Levi) works at a travel agency and is shocked to discover she’s pregnant, as she hasn’t had sex with her husband since the death of their daughter while serving in the army several years earlier, becoming consumed with the possibilities of who may have impregnated her without her knowledge.  Meron (Dani Shteg) lost his wife in a terrible car accident 8 years ago, while his older son Nessi (Moshe Ashkenazi) has been in a coma since the accident, but is starting to come awake for brief periods, which is something of a miracle, but when he fully awakes he still has the mental capacity of a ten year old.  The aforementioned Golan is wholeheartedly in love with Natasha, Ola Schor, and wants to marry her but she is dying from a mostly untreatable form of cancer that leaves he subject to violent outbursts.  Golan has given her the complete set of Gashash comedy on DVD’s, which she watches on her computer from her hospital bed, promising to reunite the group for their wedding, as they retired after the death of one of the trio.  Golan actually meets several times with Shaike, an original member, suggesting he knows the skits so well that he could play the missing member’s part, but Shaike reveals it’s impossible, a term Golan refuses to comprehend when speaking of his fiancé.

This original often hilarious film is expressed through a heartwarming intimacy, where Zafi literally wanders in and out of people’s lives as a cleaning lady, where her real passion is listening to people’s stories, discovering the things they keep secret or the habits that define them, which she reiterates in the writing workshops, which we learn is a forum for damaged people, where over time secrets are revealed for several of the members, while the others remain a mystery.  The film earned 15 Israeli Ophir nominations, the equivalent of Academy Awards, though garnered no wins, as this evocative work may prove to be too difficult for some to follow, though it moves effortlessly between humor and tragedy, most always striking a balance through a quirky, continuously energized script.  The use of locations is excellent, the characters deftly realized, where the viewers are sure to experience real passions from the intense personal drama taking place onscreen, as this strange mix is really unlike other films, using a constantly evolving, somewhat experimental narrative, where it often feels like the director is toying with the idea of how to present the material, especially the way the lives are interconnected and eventually come together.  As an expression of healing the film is profoundly moving, with likable characters sharing a curiosity about the world around them, especially Nessi, whose wild-eyed innocence becomes synonymous with renewed life or rebirth, like Yardena’s curiously unexplained pregnancy (or Immaculate Conception), a curious plot device in an Israeli film.  With so many tragic undertones, the film relies upon with the use of humor in the shifting narratives, moving from past to present, becoming overcomplicated with so many characters and a bit absurd at times, but ultimately it’s a clever treatise that incorporates death and tragedy into the multi-layered fabric of the living.
Posted by Robert Kennedy at 11:28 AM