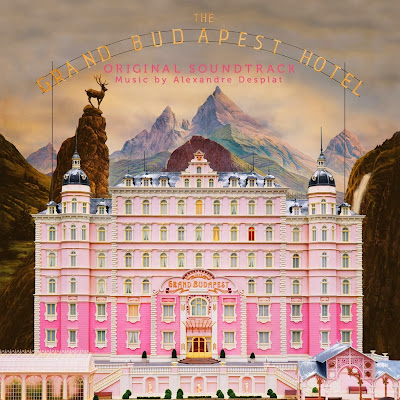 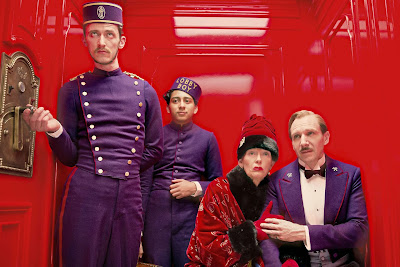 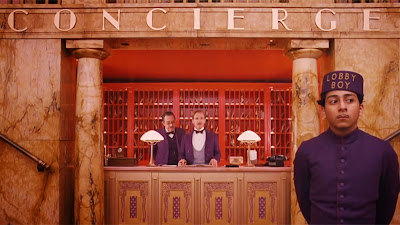 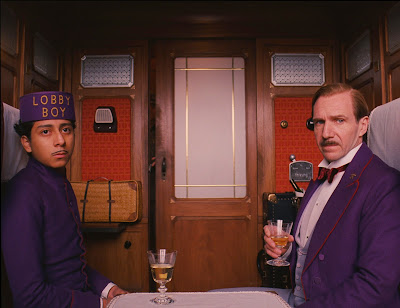 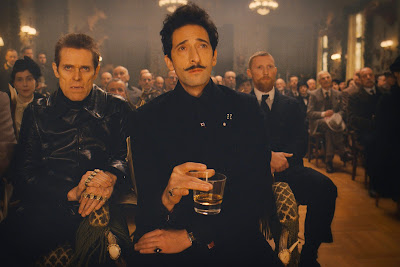 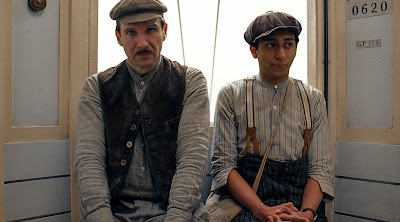 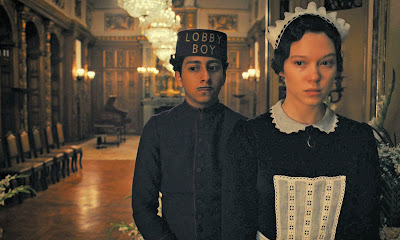 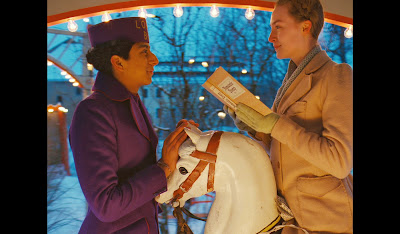 
Despite a coming attractions trailer to die for, where the sheer tone of subversive humor looks like mandatory viewing, and despite all the accolades this film has been receiving, it is not one of the better Wes Anderson films.  While the film espouses to be a rollicking thrill ride through the behind-the-scenes, Kafkaesque inner workings of the Eastern Bloc, rivaling the plot twists and cherished thrills of any Agatha Christie novel, what’s lacking, unfortunately, is a connection to any of the characters, generating a dull thud in the viewer’s heads suggesting none of the sheer daffiness of the story makes any difference in our lives whatsoever, but instead feels like an over-caffeinated, completely invented, cartoonish world of lunacy and adolescent silliness on display.   Yet we’re led to believe this film is so clever, as the rambling narrative offers a continual diversion into another dreamlike world, where we feel immersed into an Arabian Nights fantasy set behind the Iron Curtain during the height of the Cold War, where the film features a gala of stars where all of this offers such amazing potential that the film never comes to realize, as so much of it lies flat on the screen.  While it’s a well decorated screen, given an overly sweet, confectionary sugar look where an attraction to baking goods is essential to appreciating the film’s many side plots, but it just gets too carried away with its own indulgent excess, as if this is a whimsical, lighthearted delight, but so many of the comic bits feel overly contrived and repetitive in tone, where it’s so caught up in a dry parody of sophisticated wit that it forgets the magic of whimsical fun.  Some will have a good time with this film, but it’s an acquired taste and not for everyone.  Unlike 2012 Top Ten Films of the Year: #3 Moonrise Kingdom, arguably Anderson’s most delightful and thoroughly enjoyable film, one that reaches artistic heights because the essential story being told actually matters, where two highly intelligent pre-teen kids in love make a run for it, escaping the hum drum conformity that waits for them at home, where the kids lead a more charming life, feeling highly autobiographical and supremely tender, using the sophisticated interplay of the music of Benjamin Britten to add a theatrical flourish.  THE GRAND BUDAPEST HOTEL is a return to the smart-assed, mocking tone of Anderson where he remains aloof from the audience.


It’s not for lack of trying, as the effort given by Ralph Fiennes as hotel manager Gustave H. is exemplary, one of his finer performances, as is the previously unheralded Tony Revolori as Zero, his Lobby Boy, where the mischief these two get themselves into comprises the heart of the story.  Many of the secondary characters, however, barely generate a pulse, despite the exaggerated, over-the-top nature of their creation.  Even the opening falls flat, as there’s a slowly developing, somewhat boring modern era prelude that leads to a flashback sequence that generates all the interest, becoming a story (the present) within a story (the near past) within a story (the far past), where Fiennes immediately finds the right tone, becoming the center of attention, but so many of the rest feel like stock characters.  The meticulously designed sets feel like zany fun, but the execution of much of the material leaves something to be desired.  A tribute to troubled Austrian writer Stefan Zweig, a pacifist and anti-nationalist during the rise of Hitler, Anderson draws upon his 1942 memoir The World of Yesterday that he wrote escaping the Nazi’s in exile during the war shortly before his suicide, a practically unknown writer in America today, yet in the 20’s and 30’s he was the most translated European writer.


The hospital train in which I was returning arrived in Budapest in the early morning hours. I drove at once to a hotel to get some sleep; my only seat in the train had been my bag. Tired as I was, I slept until about eleven and then quickly got up to get my breakfast. I had gone only a few paces when I had to rub my eyes to make sure that I was not dreaming…. Budapest was as beautiful and carefree as ever before. Women in white dresses walked arm in arm with officers who suddenly appeared to me to be officers of quite a different army than that I had seen only yesterday and the day before yesterday…. I saw how they bought bunches of violets and gallantly tendered them to their ladies, saw spotless automobiles with smoothly shaved and spotlessly dressed gentlemen ride through the streets. And all this but eight or nine hours away from the front by express train. But by what right could one judge these people? Was it not the most natural thing that, living, they sought to enjoy their lives?—that because of the very feeling that everything was being threatened, that they had gathered together all that was to be gathered, the few fine clothes, the last good hours!


Here it jumped out at me, naked, towering and unashamed, the lie of the war! No, it was not the promenaders, the careless, the carefree, who were to blame, but those alone who drove the war on with their words. But we too were guilty if we did not do our part against them.

Transporting us to the illustrious era of the Grand Budapest Hotel, the most glorious vacation spot in the fictional Republic of Zubrowka, the film attempts to recreate the luxurious aristocratic splendor on display before that polite, civilized world was destroyed by war, even as the building still stands today nestled among the mountainous beauty of the peaks dotting the landscape, quiet and empty now, completely harmless, an old decaying structure that is a wondrous relic of the past that stands as a metaphor for a society on the verge of collapse.  In the era when Gustave H. runs the hotel, he represents the essence of civilized manner and high level service, where everyone’s needs are catered to and taken care of, where his job is to make it as smooth and effortless as possible.  His Lobby Boy is an apprentice still learning the trade from the master, teaching him to understand what a guest wants, and then getting it to them before they can even think of it themselves.  His secret is wearing a scent called Eau de Panache cologne, turning him into a ladykiller, where female guests of all ages are his specialty, offering the most intimately personalized services of the house.  When one of his wealthiest guests dies unexpectedly, Tilda Swinton as Madame Céline Villeneuve Desgoffe und Taxis, her extraordinarily wealthy and extended family is shocked to see she left her most prized painting to none other than Gustave H, causing a scandalous outrage, where her maliciously foul-minded son (Adrien Brody) and his heinously depraved hit man (Willem Dafoe) are determined to get the painting back, using a series of threats and intimidation tactics, which include detestable passport challenges of his precious Lobby Boy, a man in exile who unfortunately travels with flimsy travel documents, where Gustave H. is even thrown into prison.