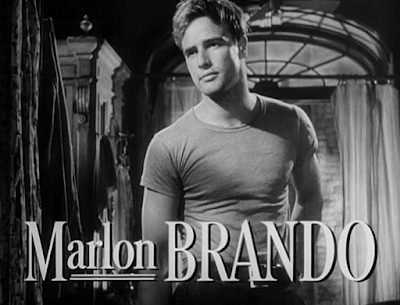 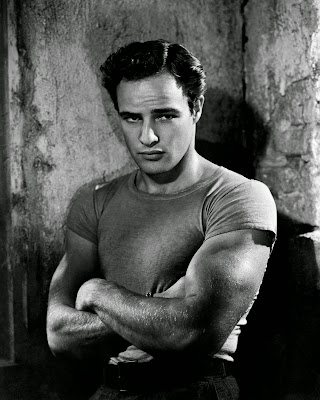 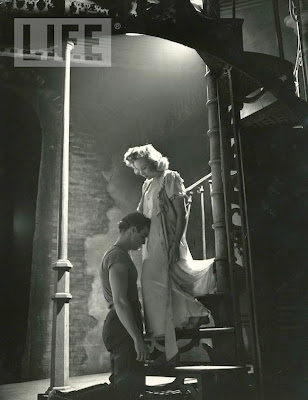 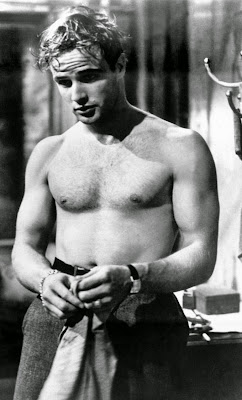 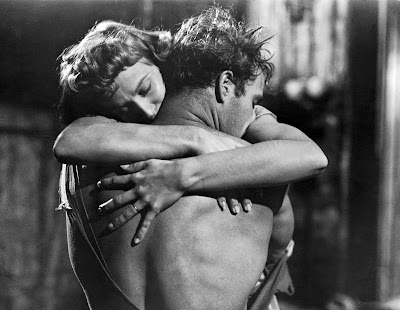 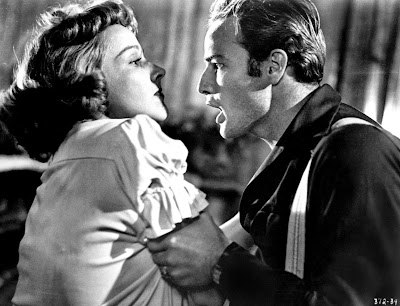 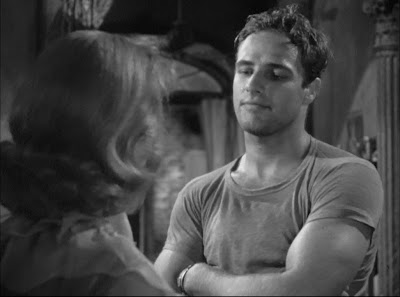 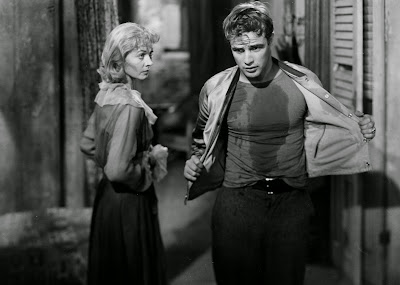 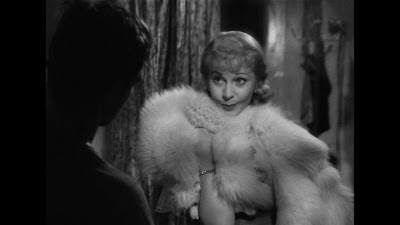 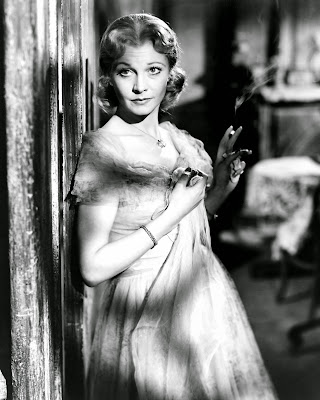 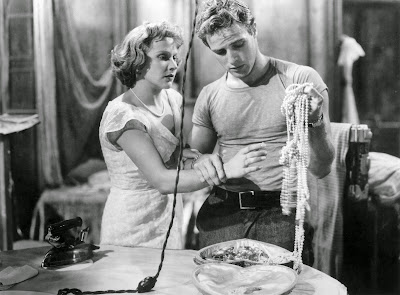 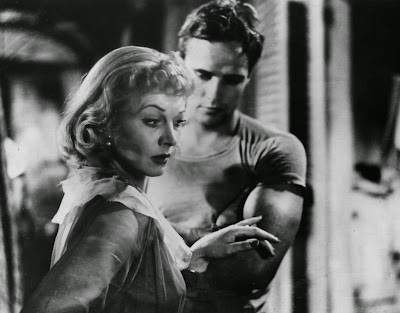 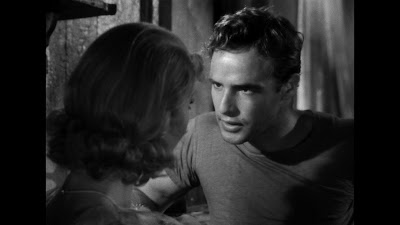 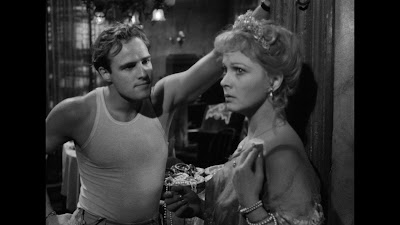 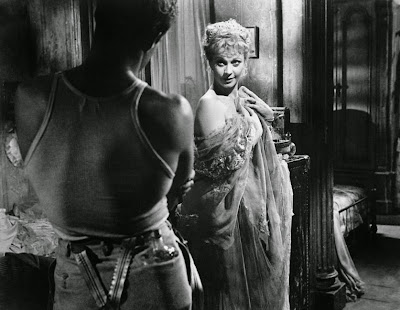 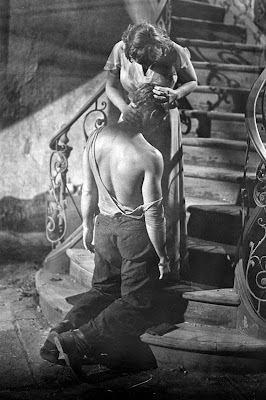 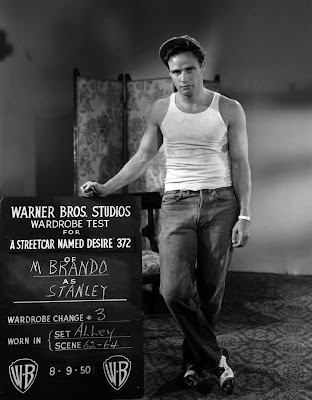 
While Marlon Brando introduces theatrical realism with his intense, in-your-face demeanor, Vivien Leigh, in contrast, seems rather pathetic in her exaggerated, near silent era performance.  The character of Blanche DuBois is supposedly based on Tennessee Williams’s sister Rose who had lifelong mental health problems until a lobotomy left her completely unreachable.  While the story is steamy and sensual, featuring the physicality of Brando’s Stanley Kowalski, and his adoring, yet physically and emotionally abused wife Stella (Kim Hunter), their lives are interrupted by a mysterious visit from Blanche, Stella’s sister, who moves into their tawdry flat in New Orleans but immediately finds Stanley “a survivor from the Stone Age.”  While she thinks she’s got him all figured out and immediately urges her sister to come away with her, Stella reminds her that she’s wildly in love with the man.  While Brando exhibits an ease and naturalness in front of the camera, where his every gesture suggests a sexual swagger, Blanche is a repressed grand dame from the old South who is used to being waited on hand and foot, who’s mind is forever focused on herself, and who embellishes everything about herself to make herself more attractive to the people around her, never believing any of it is a lie, but that it’s all part of female guile.  When Stanley soon discovers a friend from her past that reveals she’s a fraud, Blanche begins her retreat into the safe world of her memories.  When a gentleman caller, one of Stanley’s card playing friends, Mitch (Karl Malden), sees through her, she’s fully on her descent of losing all contact with the present, which is made complete by a suggested (not shown) rape scene from Stanley.


Brando is so interesting with his low class accent and his swagger that he’s a motivation all by himself to take up the craft of acting, as movies had never seen anything like this before, ravishingly good looking, completely masculine, yet also troubled, tender, even fragile, a guy who wears his vulnerability on his sleeve.  But he’s also a bully, pitifully inept at expressing himself, yet stridently confident, so he tends to throw things against the wall and yell at high registers to intimidate Stella, always apologizing afterwards and burying his head in her chest.  In contrast, Vivien Leigh’s character is pretending all the time, and her fall from grace is immediate and decisive, as without the façade of deception, she can’t fool anyone anymore, leaving her helplessly isolated and alone.  Her face is filmed in shadows, where she always darkens the room to better make her retreat, while taking several steaming hot baths every day.  Unfortunately, Blanche has become somewhat laughable in her fragility, a woman caught in the cobwebs of time, a bundle of nerves where it’s as if she continues to use Southern Gothic dialogue written by Truman Capote, the kind that bears no resemblance to real conversation, but instead floats into the air with a kind of ancient poetic resonance.  She is at her most manipulative best in a scene with an innocent young boy who knocks on the door to ask for charitable contributions, but ends up being the victim of a pathetic, older woman who wants to relive her youth with a kiss, leaving the poor kid wondering what the hell has happened.  Blanche was fired from her job as a schoolteacher for sleeping with a 17-year old student, but her real travesty was her marriage, where her descent from reality began when she discovered her husband having homosexual sex with another man (conveniently left out of the film) before committing suicide.  That kind of trauma never disappears, and Blanche has been building walls to hide behind ever since.  But Stanley crudely smashes all of the walls of resistance, exposing her for the helpless creature she is, expressed in her final words, “Whoever you are, I have always depended on the kindness of strangers.”


The film began the casting of leads as anti-heroes, as Stanley is hardly a gentleman or a noble character, instead he’s a brute that Blanche compares to the animal kingdom.  Also the sound design feels configured by Alfred Hitchcock, as the loud noise of a passing train leaves Blanche emotionally shattered, where she completely loses her sanity, growing near hysterical each time while crumbling to the floor.  Overall, as a movie or a play, the problem is Blanche has more screen time than Stanley and she simply can’t hold her own against his physical presence, forcing the audience to endure the rhapsodic overtures of a weak and feeble mind spouting off on another rambling alcoholic soliloquy.  More than 50 years post production, audiences will tend to laugh at her utter ridiculousness, where every outfit she wears looks like it’s been stored in mothballs for decades while everyone else around her wears casual, comfortable clothing.  The play itself, while earth shattering to the senses, one that easily qualifies as a landmark, dwells in the minds of just a few central characters, and despite having a raw, sexual presence, censors cut out much of this subject matter from the film.  But it certainly features peak moments of intensity, not to mention a brawling spontaneity, before Blanche goes off on another one of her all-too descriptive recollections from her past that just takes all the air out of the room.  The balance of power shifts with Blanche’s arrival, where Stella may eventually develop new understandings in how to deal with a man like Stanley, but in this play, in this era, he’s calling all the shots.
Posted by Robert Kennedy at 12:19 AM