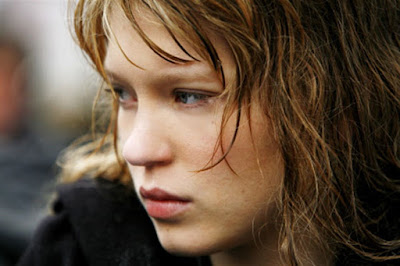 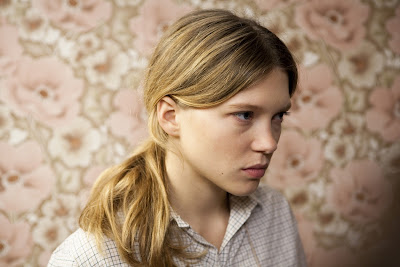 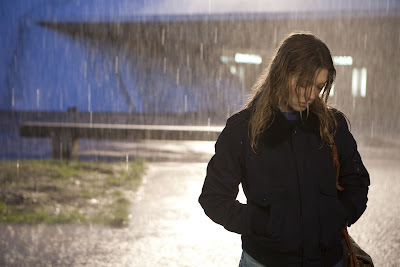 
Every generation seems to have a teen angst movie like this one, from THE WILD ONE (1953), REBEL WITHOUT A CAUSE (1955), The 400 Blows (Les quatre cents coups) (1959), to the film this most resembles stylistically, Cold Water (L’eau Froide) (1994), where the role of Léa Seydoux as Prudence most definitely resembles Virginie Ledoyen, both 16-year olds with absent parents who go on a binge of inappropriate behavior, where Assayas’s film carries more weight and complexity, as it has a better script and his use of iconic music is more cultural and a reflection of the times, while this first time director has a searing lead performance from Seydoux, a girl who will throw herself at anything in order to forget how empty she feels inside, but her life as well as the secondary characters remain largely undefined, where we only view them in passing instead of feel intensely immersed in their lives and affected by the outcome.  Prudence is largely indifferent to her circumstances, numb from the recent death of her mother, where in an early scene she’s caught shoplifting, meets another petty thief in holding, Maryline (Agathe Schlenker), where perhaps the shot of the film is watching her on her way out the door, as she hesitates before walking outside, remaining hidden behind a wall while the audience sees Maryline join a group of awaiting bikers, where all the action is interestingly kept out of focus as we see a series of guys on motorcycles doing wheelies, revving their engines, just generally showing off in front of the girl before she climbs on the back of a bike and they all ride away, creating quite a spectacle—apparently arousing Prudence’s interest.  Shot by Georges Lechaptois, the film is very much in the style of hand held Steadicam cameras closely following the rhythms and natural movements of the kids, where they have an easygoing attitude about sex and nudity, where frank discussions about sex, especially from the female point of view, are the norm.  If ever there was a movie ripe for the song Dear Prudence The Beatles - Dear Prudence YouTube (4:00), this is it, but sadly it was not to be.


Prudence lives alone in her parent’s spacious house with her father continually absent except by phone, where her older sister Frédérique (Anna Sigalevitch) keeps an eye on her, but her life is an open door of new opportunities, expressing little interest in school, where she typically finds parties every night instead.  When she runs into Maryline, she expresses an interest in meeting the bikers, who are the kinds of guys more interested in bikes than girls, who will pay attention to girls when they have nothing better to do, but will drop them flat the minute any biking event is happening, where they hold impromptu races every night, some of them daredevil, all illegal, where it’s not uncommon for people to get seriously injured or killed, often due to poor maintenance standards, where the carelessness of one rider will kill another.  Somehow, they’re all immune to even talking about this gruesome subject, yakking and having a good time over beers instead, where together they display a 50’s homoerotic camaraderie.  It’s never made clear what interest this holds for Prudence except there are cloisters of guys, any number of whom would be happy to hang out with her, so she pretty much has the pick of the litter other than Maryline’s guy.  While this is nothing like BAND OF OUTSIDERS (1964), for instance, as it lacks the wild optimism and free-spirited energy and humor of the 60’s and instead projects an endless dreariness and monotony, bordering on fatalism, where kids are simply bored with the same things happening in their lives every day, where the idea of tempting death doesn’t feel like such a bad idea.  Any happiness expressed on the screen lasts only for a brief instant, like a quick thrill, whether on motorcycles or in bed, and then it’s over.


There’s only the briefest hint of a storyline, clocking in at only 80 minutes, where sexual attraction may hold the audience’s attention briefly, but then it quickly wanes, as Prudence isn’t really interested in any guy, but that doesn’t stop her from having sex, or even from taking unnecessary abuse, as she can barely tell the difference.  There’s a cloud of gloom hanging over her shoulder, where her family is still grieving over her mother’s passing, but Prudence is living like there’s no tomorrow, where her sexual behavior looks like a textbook on how to obtain sexually transmitted diseases.  You’d think high school kids should be smarter and more careful, due to increased awareness and available information, but this girl simply doesn’t care what happens to her.  Despite the downbeat subject matter, the film has a fresh, near documentary style, where the awkward, uninhibited nature of teenagers is always appealing, and a good deal of the film has an upbeat musical backdrop that throbs and pulsates with a kind of electric energy.  Seydoux couldn’t be more committed to the role, where it looks like the part was written just for her, as her smoldering sexuality is always expressed in a low-key, offhanded manner, where she’s comfortable, relaxed, and even nonchalant while naked in front of the camera, but gives an edgy performance of moodiness, forever feeling like she’s lost in a rapidly descending sea-change of self-absorption, where it’s easy to see how everyone misunderstands her, continually thinking she’s selfish, as they’re missing the pain she’s trying so hard to avoid.  Of course the inevitable happens, where the end couldn’t be more predictable, even if told in a starkly unanticipated manner, where despite many excellent qualities in this film, especially the unflinching and naturalistic portrait of a glum teenage girl, the script is too bare-bones, never really fleshing out anyone else’s story or offering any new insights into grief or adolescence.
Posted by Robert Kennedy at 12:00 AM