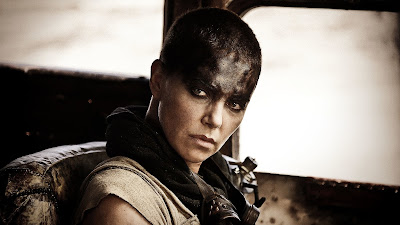 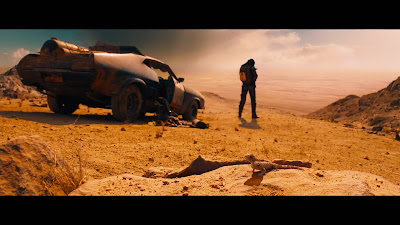 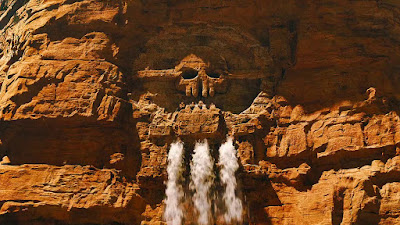 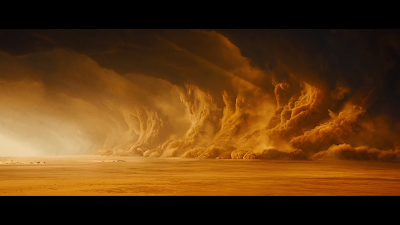 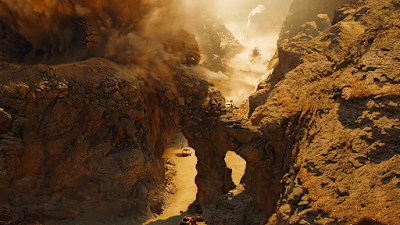 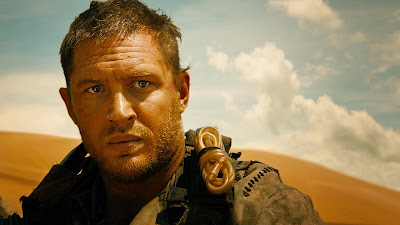 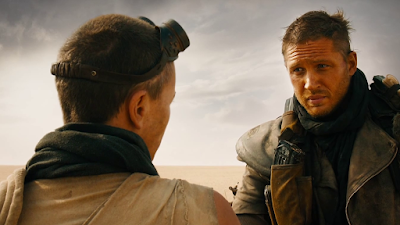 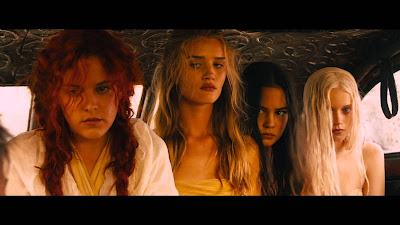 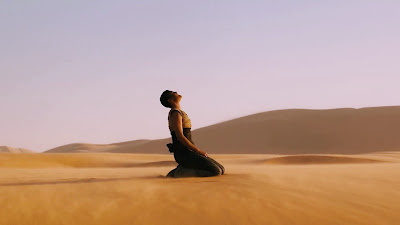 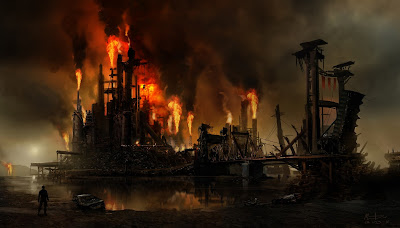 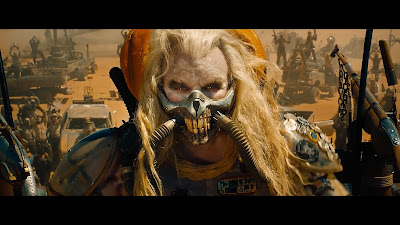 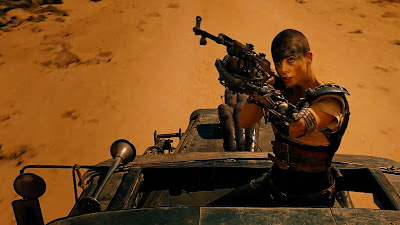 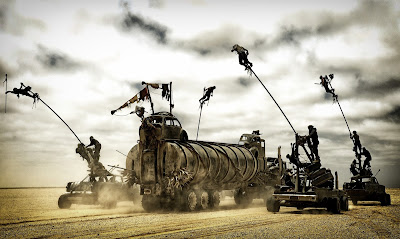 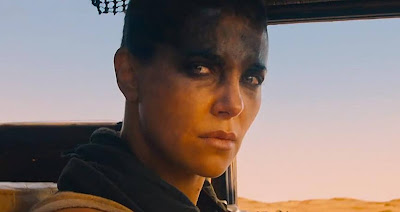 If you like adrenaline-laced Hollywood action adventures, then this is the movie for you, as it’s really all about a series of lengthy chase scenes, each one attempting to create blood-curdling moments of action and suspense, followed by a few moments of down time where the viewers can catch their breath, before the next one starts up again.  It’s a bit like kids waiting in line at Disneyland before taking a ride on one of the more spectacular roller coaster adventures of their young lives, where spending all day at this could resemble the feel of this movie.  It’s not essential that you’re young, but it actually plays better to those who weren’t around to see the original MAD MAX Trilogy (1979, 81, 85).  To those that were, this is fairly forgettable, as you’ve seen it all before, where this is kind of a combination of films two and three reassembled into a director’s cut, where director George Miller waited thirty years for technology to catch up to what he likes to do, which is stage elaborately choreographed fast-action fantasy sequences that are pumped and accelerated by the apocalyptic, end-of-the-world setting, making it matter who wins these catastrophic bloodfests filled with crashes and explosions and bodies hurled in every which direction, giving each episode a moralistic twist.  Personally, having seen the originals as they came out, there’s not much to get excited about, as this has all played out before, where in at least one person’s opinion, Mel Gibson’s Max (replaced here by British actor Tom Hardy) remains the essential piece of the puzzle, where the spare minimalism of the initial episode (made for less than half a million yet earning $100 million, holding the Guinness Book of World Records for most profitable film for decades, supplanted by 1999’s BLAIR WITCH PROJECT, and then 2007’s PARANORMAL ACTIVITY, which remains the most profitable low-budget movie ever) remains the best for its novelty, daring originality and utter bleakness.  No one had ever seen anything like that before.  While this may be exactly what people in theaters want to see today, where it’s all about thrilling action and explosions on the biggest screen, really it’s just more of the same.  Even the previews before the movie tell the story, as there were four (count ‘em) trailers for Marvel Comic Book action adventure movies, from ANT-MAN to FANTASTIC FOUR to DEADPOOL to BATMAN V SUPERMAN: DAWN OF JUSTICE, not to mention a new STAR WARS Christmas release, where there is a stream of neverending movies just like this coming out of Hollywood for the next gazillion years (DC and Marvel Comic Book Movie Lineup - 2015 to 2020 ...).  The movie industry has apparently invested all their money in exploding action adventures like this, where viewers must pay a premium price to watch it in IMAX or 3D or the biggest and loudest theater experience possible, where what you pay for is more vividly enthralling than the normal experience of watching it in the comforts of your home, as that’s what Hollywood is selling.  That’s the new theatrical experience, where bigger is better.

Essentially modelled after MAD MAX 2, aka: THE ROAD WARRIOR (1981), which offered breathtakingly relentless non-stop action in an era before CGI effects were possible and is considered one of the greatest action movies ever made, topping the list in a recent January 14, 2015 Rolling Stone magazine Reader’s Poll, Readers' Poll: The 10 Best Action Movies of All Time ..., while described by critic Richard Scheib, Moria - The Science Fiction, Horror and Fantasy Film Review [Richard Scheib], as an “exhilarating non-stop rollercoaster ride of a film that contains some of the most exciting stunts and car crashes ever put on screen.”  It is the ultimate demolition derby movie that this fourth film has attempted to surpass―and if you’re judging purely by thrills and spills, perhaps it has.  The question, of course, is what does it matter?  Is this anything more than a summer blockbuster movie?  Does it contain a hint of the poetry from the original Trilogy?  Compare the narrator from MAD MAX 2:

A whirlwind of looting, a firestorm of fear.  Men began to feed on men.  On the roads it was a white line nightmare.  Only those mobile enough to scavenge, brutal enough to pillage would survive.  The gangs took over the highways, ready to wage war for a tank of juice.  And in this maelstrom of decay, ordinary men were battered and smashed.  Men like Max.  The warrior Max.  In the roar of an engine, he lost everything.  And became a shell of a man, a burnt out, desolate man, a man haunted by the demons of his past, a man who wandered out into the wasteland.

While a similar narration opens MAD MAX 4, toned down significantly:

My name is Max. My world is fire and blood.

Outside of the first, which has become a prelude for the rest, still connected to the world as it was before whatever apocalyptical disaster occurred, MAD MAX 4 is perhaps the most minimalist of the entire series, where Max himself is not even the center of the action, but has been replaced by a newly introduced character, Furiosa (Charlize Theron), who’s seen as more of a badass than Max, whose replacement by a different actor is simply unthinkable.  It would be like Sergio Leone finding someone to replace Clint Eastwood in his legendary spaghetti westerns.  Some iconic figures are so cemented in the heart of the culture that it’s something you just don’t mess with.  Perhaps as a consequence of the transitory nature of a global economy, nothing is sacred.  But this certainly alters the tone of the movie, where the audience was asked to get inside the head of this lone figure wandering the wasteland, a man who started out with a wife and child, but lost everything, as did everybody else.  What follows is utter savagery, but Max, though loath to admit it, becomes a symbol for what was lost, still holding to a humane streak hidden deep inside that gruff exterior which affects our sympathies and appreciation for him, as he’s driven like no one else.  That’s entirely missing in this 4th episode.  And while he’s present, he appears mentally unstable, having grown closer to the darker side of madness, haunted by recurring flashbacks and psychotic voices in his head of all the people he tried to save and failed in the past, which have the effect of draining his strength and weakening his will to survive, which is and always has been his strongest asset.  Not so here, as we haven’t a clue what drives this man, as we no longer connect him to that same iconic figure.  Does that alter one’s appreciation for the movie?  Perhaps, as Max was like no one else.  Altering his persona removes our interest in the overall scheme of things, unless all we care about are extended chase sequences.  Originally conceived more than a decade ago, the film was ready to shoot, but postponed following the 9/11 attacks, where any number of obstacles since then have prevented the film from being made until now.  While all have been conceived and directed by Australian George Miller, this long interim from the last film has allowed technology to catch up with his grandiose vision, as the key to all these films has been the fantastic visual design of an entirely original universe, like something that might have come out of the mind and imagination of fantasy surrealist Alejandro Jodorowsky.  At least partially shot in the Namib Desert of Namibia, South Africa, considered the world’s oldest desert, it is a fitting landscape for the remnants of a post-apocalyptic world, as the world’s devastation is easily understandable without ever having to resort to any extraneous talk about how we destroyed ourselves.

Exactly like MAD MAX 2, the action centers around a daring ride in a tanker truck to help save what’s left of any civilized world, but in something of a twist, Max is not the one driving the truck.  Instead he’s imprisoned by a marauding gang of thugs that control a territory built into the cavernous regions of a giant rock formation known as the Citadel, where they have tapped into an underground water supply and built a structured male-dominated society based on servitude, controlled by the tyrannical Immortan Joe (Hugh Keays-Byrne), a hulking mass of a man that resembles the primitive crudeness of early gladiators.  While it’s essential that each of the imaginary worlds created for each film have a distinctly different look, this one is equally outrageous, with oversized women with massive breasts who are hooked up to machines for their milk, but also an army of captive blood donors whose blood is used to keep others alive, many of whom are suffering from cancerous tumors.  After his capture, Max is kept in chains as a “blood bag,” hooked up like an IV to one of the young “War Boys” named Nux (Nicholas Hoult), who dreams of pleasing Joe with his valor in the field of battle, where Joe promises an afterlife in Valhalla if they die in combat.  Nux uses Max as a hood ornament for one of their gas runs into a nearby city in the wasteland, while Joe’s top driver, Furiosa, is driving the giant tanker, surrounded by a squadron of motorbikes and war hot rods armed to the teeth, one of which is driven by Nux, a deranged, new generation kid who is defined by his unhinged fanaticism.  When Furiosa takes an unexpected turn, spotted by Joe’s lookout team, all Hell breaks loose, as this act of defiance opens the floodgates of rebellion, where hidden in the truck Furiosa is smuggling out Joe’s five wives, each one selected for breeding, hoping to lead them to freedom.  What follows is a furious assault to repossess his property, while Max remains chained to the car wearing an armored mask throughout the heated battle, with the tanker plunging headfirst into the middle of a raging sandstorm.  In the lull after the storm, Max and Furiosa have their own little standoff, where he discovers the young girls, uses cutters to remove the chains, and tries to drive away on his own, but the gas tank is rigged, forcing them, for better or for worse, to forge an uneasy alliance.  This rag tag team of survivors, including Nux who changes sides once he’s introduced to female companionship, and others they meet along the way, continue to come under waves of relentless assaults for the remainder of the picture, a frenetically choreographed run for freedom that accentuates Miller’s prowess at directing exhilarating, ultra-kinetic action scenes of fire, bloody chaos and sheer mayhem while barreling through the wide-open expanse of the desert, where THE FAST AND THE FURIOUS (2001, 03, 06, 09, 11, 13, 15) meets a modern day LAWRENCE OF ARABIA (1962) in a nonstop action adventure movie.  As to claims of a feminist theme, let’s not to get carried away, as it’s only in the sense that women, just like men, can become fantasy figures who lead revolts and fire guns and rifles defending themselves, while killing others with equal success.  Hardly worthy of applause, but many in the theater were cheering, much as they did generations earlier for John Wayne in westerns.
Posted by Robert Kennedy at 1:00 AM