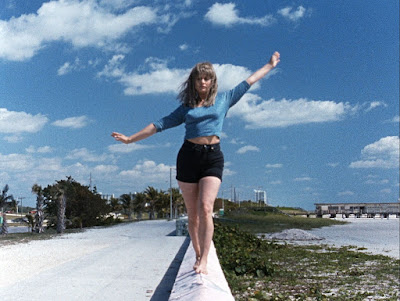 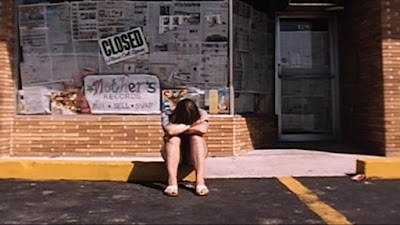 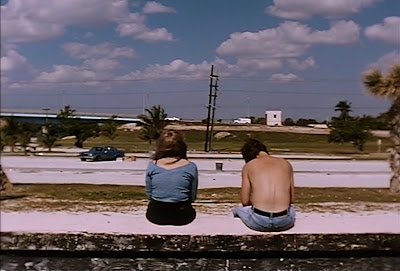 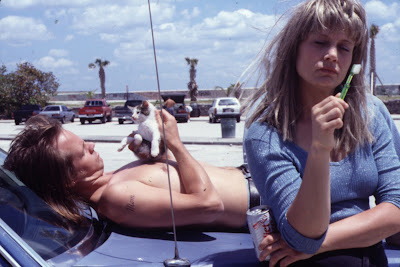 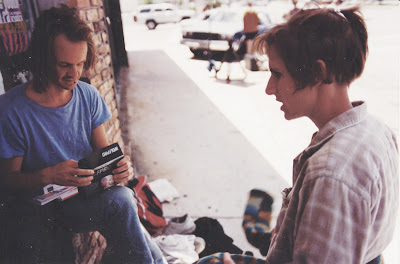 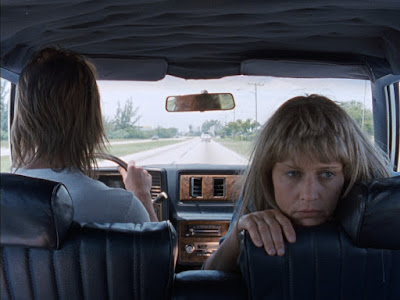 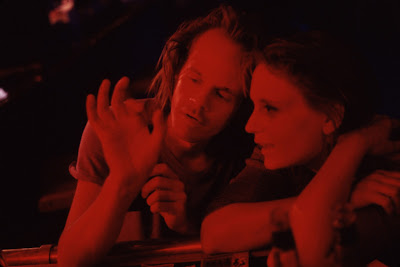 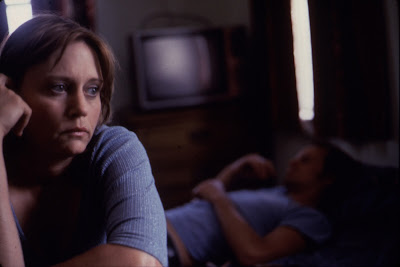 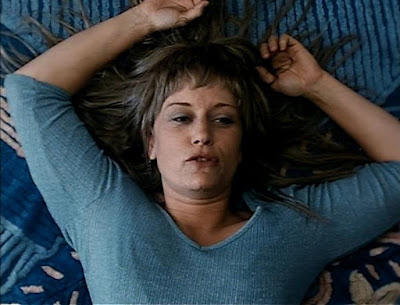 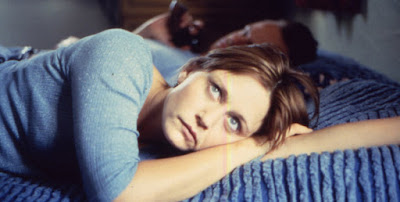 Arguably Reichardt’s best film remains her first, easily the most enjoyable work over her entire career, despite the slow and relatively downbeat subject matter, as it’s given a playful and surprisingly blunt style that remains invigorating throughout.  First films are often an indicator of what’s to come, but this is infinitely more amusing than the films to follow, where the jazz soundtrack with occasional drum solos sprinkled throughout pay homage to that subterranean subset of cool music aficionados inhabiting the cozy intimacy of late night, smoke-filled rooms.  While her recent features are far more mannered, intellectually refined, and quietly paced, judiciously taking place somewhere on the fringe of feminist consciousness, where there is historical relevancy to the indicated time periods, this first feature has a more brash and youthful pedigree, where there’s a surprising amount of quirky energy going on where the unique circumstances of dumbstruck and outwardly naïve outlaws-on-the-run definitely adds a bit of flavor, where the painfully underfunded, low-budget production helps to provide a raw and edgy vibe.  Incredibly, despite the accolades that greeted her first film, nominated for Grand Jury Prize at Sundance as well as three Spirit Award nominations in 1994, it was more than a decade before her next feature, where women even now continue to be denied access to the industry, yet ironically, they are plastered across the screens as sexual objects which express an exclusively male point of view.  As a result, she made a few video shorts until fellow indie filmmaker Todd Haynes signed on to produce her next four films, including Old Joy (2006), Wendy and Lucy (2008), Meek’s Cutoff (2010), and Night Moves (2013).

“The more money you take, the more hands there are in the pie,” she points out. “Right now, there’s no one telling me what to do. I can edit on my own schedule. No one gives me notes outside the same friends who I’ve been showing my films to since I started.” Small wonder she’s so contented when those friends include fellow directors Phil Morrison (Junebug) and Todd Haynes (I’m Not There), who have executive-produced most of her work. She began her film career on the crew of Haynes’s 1991 feature debut, Poison, but he’s an equal rather than a mentor, and has been known to drive her around when she’s scouting locations.

Despite such influential friends, it continues to be a fight for Reichardt to get her movies made. Depressingly, her difficulties have often come down to old-fashioned sexism. “I had 10 years from the mid-1990’s when I couldn’t get a movie made. It had a lot to do with being a woman. That’s definitely a factor in raising money. During that time, it was impossible to get anything going, so I just said, ‘Fuck you!’ and did Super 8 shorts instead.” She’s doubtful that the climate has changed much, even after Kathryn Bigelow’s best director Oscar for The Hurt Locker. “I’m outside the industry so I have no idea. But you can watch awards shows or see what’s being made and you still don't see women who have the career of Todd or Gus [Van Sant] or Wes Anderson, or any of those men who make personal films. I teach for a living, and I make movies when I can. I’ve never made money from my films.”

Curiously, Reichardt’s first feature was the inspiration behind the recent Amy Seimetz lovers-on-the-run film Sun Don’t Shine (2012).  While the mismatched lovers weigh down Seimetz’s film, as they couldn’t be less interesting, they are an absolute delight in the original, starring Lisa Bowman as Cozy, a bored, 30-year old housewife still living with her father who dreams of being an acrobatic dancer, the daughter of a jazz musician (Dick Russell) turned detective, whose own mother left home at an early age, feeling surprisingly just as ambivalent, showing little interest in her own children, leaving them home one night, meeting a man named Lee (Larry Fessenden) at a roadside bar, a guy still living with his mother who recently discovered a gun lying on the side of the road, and running off with him.  Together their adventure comprises the entire film.  The unique structure entices from the outset, with a surprisingly candid voiceover from Cozy that provides an air of indifference about the monotonous emptiness in her life, as if she’s just been drifting through the days waiting for that one moment when a switch will suddenly flip on.  The similarity with Sissy Spacek’s character in BADLANDS (1973) is inevitable, as little does she know that another person feeling equally as low and unhappy is living in the neighboring county, where the two are destined to meet.  While this foreshadows an epic encounter where the stars are aligned, nothing could be further from the case.  These two characters are barely there, defined from the start by their social dysfunction, so we never see them actually click together as a couple, rather they seem thrown together by circumstances beyond their control.  Almost at random, numbers occur, like chapter headings, providing apparent order to the meandering nature of the story.  The intimacy of the music adds a special twist, as it feels highly personal, adding a swagger and sensuality missing from these characters who never feel comfortable in their own skin.  By no means does this detract from the viewer’s interest, as it’s their conventionality and sheer ordinariness that feels so appealing, where they’re perfectly relatable, as if we’ve known them all our lives, as there’s a part of us they each seem to possess, like the existential loners from Beckett’s Waiting for Godot.

Set in the stagnant depression of the Florida Everglades, where dilapidated businesses appear on the verge of economic ruin, there’s no sense of hope or advancement, as if we’ve wandered into the same desolate universe as Barbara Loden’s Wanda (1970), an unflinching portrait of a woman with no ambition and low self-esteem, whose very character is personified by a lack of ambition or personal drive, where there’s not an ounce of artifice anywhere to be found on the screen.  The conscientious aspect of feminist filmmaking shares a similar spirit, as we find ourselves in the company of a woman we have all met many times over, but probably paid little attention to, as there is little about her that stands out.  Throwing two characters together whose lives have never really gotten started is a real challenge, as the combustible energy of their collective lives barely lights a flame.  The brightest color onscreen is expressed by the extreme yellow suit worn by Cozy’s father, who’s struggling with his own woes within the department, as he’s mysteriously lost his police revolver.  This missing item inexplicably ends up in the hands of Lee and Cozy, where in a moment of panic, their comedy of errors begins.  Thinking they’ve shot someone, they immediately go on the run to avoid detection, hanging out in local dive motels, never really venturing far, as the only means of obtaining cash is selling his mother’s record collection.  The dubious nature of their criminal mentality is challenged throughout, as there’s some question whether they’ve even committed a crime, but nothing is more shocking than witnessing Lee loitering around inside a convenience store, where all the pressure of the world is upon him to provide some money to pay their motel bill, where he’s at the psychological precipice of committing a real crime when in a flash someone (looking very much like the director herself) runs in with a gun and grabs the contents of the cash register, leaving him utterly flabbergasted.  The meager nature of their dreams and fantasies are continually undercut by the bleak miserablism of their real lives, yet this effortlessly plays out with such meticulous precision that by the end the imaginary world wonderfully intersects with reality to the point where the viewer and the characters onscreen can’t seem to tell the difference.  In one of the more fascinating realizations, Cozy is stunned by the idea that she might not have actually killed anyone, which leaves her terribly disappointed, as her dream of being an outlaw has suddenly been snatched away, suddenly feeling desperately lost and alone, losing all sense of her remarkably resuscitated self-esteem, where she absurdly thinks if you’re not a murderer, then you’re not really anybody.  She quickly rectifies that, at least in her mind, fueling into the dark swirling themes that define the entire picture, largely fed by pseudo imagery from the sexually empowered female protagonists in Roger Vadim’s …AND GOD CREATED WOMAN (1956) and Louis Malle’s VIVA MARIA! (1965), not to mention the many 50’s and 60’s jazz album covers that feature sexually alluring women in provocative poses, where she can be heard muttering under her breath, “Murder is thicker than water.”  Reichardt herself described the movie as “a road movie without the road, a love story without the love, and a crime story without the crime.”
Posted by Robert Kennedy at 12:00 AM