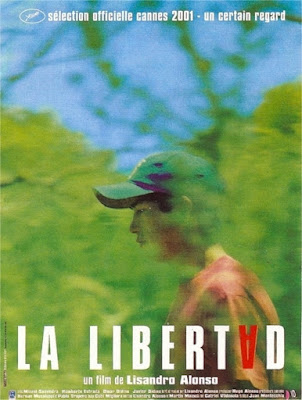 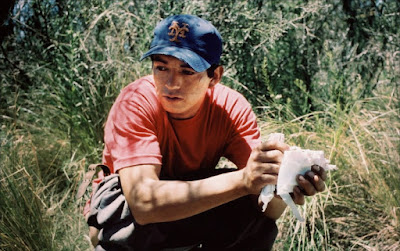 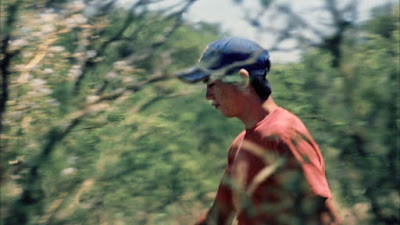 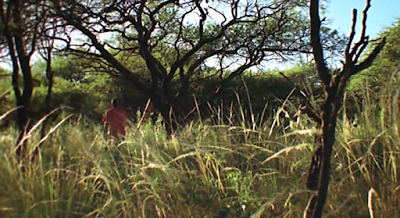 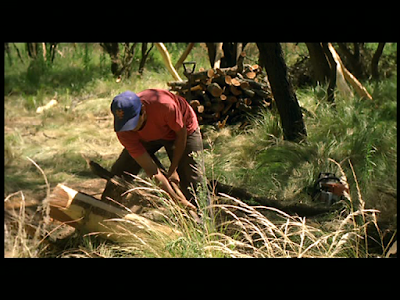 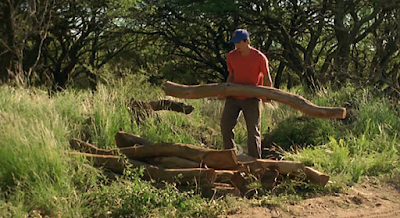 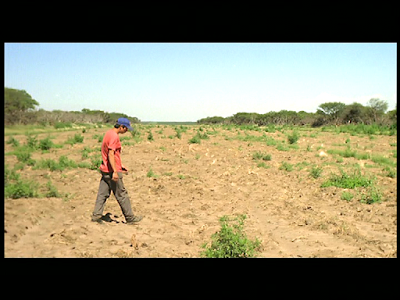 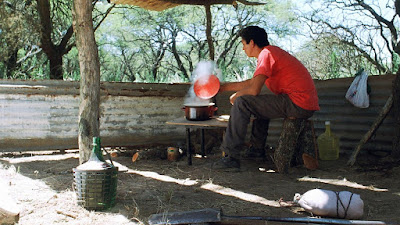 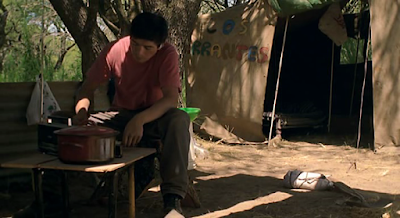 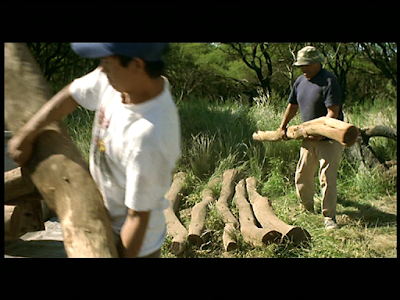 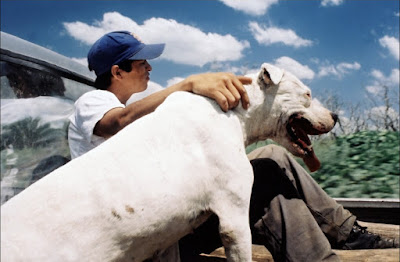 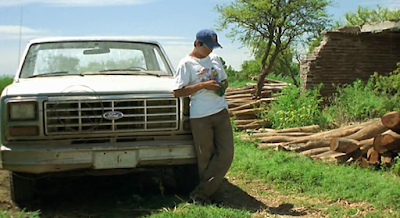 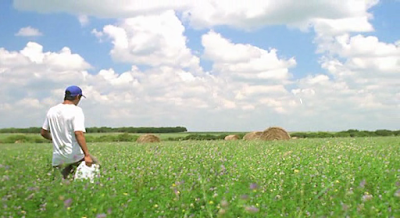 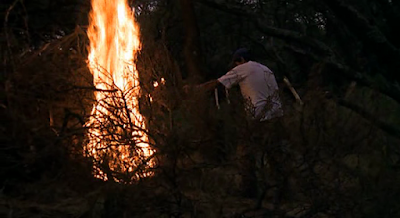 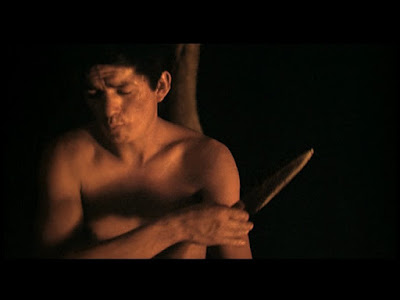 To me he’s a sage.  Someone who isn’t interested in society, who creates his own world.  People talk about Whitman, Rousseau, Nietzsche, and other names I’ve never heard of.
—Lisandro Alonso, speaking of Misael, the protagonist of his film La Libertad

Narration is all but absent in Alonso’s first feature, where in his words, “I don’t want to tell a story.  I’m interested only in observing.”  The son of a cattle rancher, at the age of 25, Alonso decided to spend time in the country on land purchased by his father, taking him into Argentina’s Pampas region where he met the film’s protagonist, a tree cutter (hachero) named Misael Saavedra, spending 8 months with him before pitching the film to his former film school, Universidad del Cine in Buenos Aires, immediately encountering resistance, as neither his family, his friends, nor his school liked the idea, so he financed it independently with $50,000 from family money, making his father the producer.  Using a 12-person crew, they shot for ten days, basically presenting a day in the life of Misael.  Told with lyrical power and a scarcity of information, the film is far from a documentary portrait, as you could imagine how this would be so differently presented in the hands of Werner Herzog.  Instead it resolutely refuses to provide any background information, where it’s 30-minutes into the film before a single word is spoken, providing an unflinching look at a man living a solitary life in the countryside, where the bold declaration of the title provides the viewer all they need to know, as it’s a question asked throughout the film, which is itself a conglomerate of fiction, documentary, and improvisation, where the camera, mostly in long takes, follows this young man around as he cuts wood with an ax and chainsaw, rounding up tree stumps, cutting off branches, marking tree trunks, then placing them all in a woodpile, as we see him walking through the high grass, even defecating in the woods, with the sounds of cows heard in background.  After a while he takes a break to eat, washing his hands, changing his T-shirt, warming up prepared stew in a pot, turning on a radio playing Latin Salsa music, while also gulping water and smoking a cigarette.  A rhythm of motion is established through simple means, and like the director’s other works, this exceedingly spare and minimalist film takes the form of a silent, solitary journey.

Misael greets a man and his son as they pull up in an empty pickup truck by his woodpile, loading the bare logs in his truck, while Misael rides in the back with a giant white dog panting all the way.  They get off at home, allowing Misael to continue by himself, reaching a rural lumberyard where he hops out and rolls a cigarette, where one hears the sounds of dogs in the distance as he waits for the owner to inspect his lumber.  Offering 15 stumps at two pesos each, he ends up selling them for one peso and 80 cents each, or 27 pesos (approximately $9 dollars).  After unloading his truck, he immediately spends 10 pesos on cigarettes and a cold soda, as well as a gallon of gasoline for his chainsaw that he pours into a plastic jug.  Returning the truck to its rightful owner, he heads off into the open fields, past cows and wheatstacks, disappearing into the treeline where he catches an armadillo, lugging it along with him as he ambles through the forest back to his tent.  Making a fire, placing a metal grill over it, he whacks the animal a few times before slitting it open and roasting it on the fire, skin down.  Later in the evening, he lights a pile of brush on fire in the woods before sitting down to eat his meal, illuminated by campfire, where the film opens and closes with mirror images of Misael eating the cooked armadillo with his knife, where lightning and thunder can be heard in the background, though at the end, he boldly eyes the camera with furtive glances before the film fades to black, showing the title sequence as the rains fall.  Interestingly, the credits actually play at the beginning, along with a bass-heavy, pulsating vibe of contemporary music by Juan Montecchia, where the opening credits to the glacially paced LA LIBERTAD and Liverpool (2008) both feature strangely uptempo music, where this is the first in a Lonely Men Trilogy that also includes LOS MUERTOS (2004) and Liverpool (2008), one of the more intriguing trilogies in contemporary cinema, as one wonders whether these solitary men operating in isolated rural regions, outside the constraints of society’s reach, are really more liberated, or does their extremely limited economic opportunity keep them in a neverending cycle of powerlessness and poverty?  While they answer to no one but themselves and have skills that allow them to survive in the wilds of nature, yet their silence is reflected in their absence of political power, remaining marginalized, and perhaps even exiled from the broader community that all but ignores them.  In a broader view, they may as well be invisible, which is why Alonso chooses to shine a light on them.

The film screened at the Un Certain Regard section of Cannes in 2001, quickly becoming a festival favorite, largely due to its daring originality and almost complete absence of language, yet it is inexplicably listed as the #3 film of the decade by Cinema Scope magazine, Cinema Scope Top Ten Films of the Decade - Cinema Scope, which is a head scratcher, but an example of how well Alonso is received in critical circles.  Described as “a poetic meditation on labor and landscape,” the film is reduced to its barest necessities, which perhaps increases the observational focus of the viewers, with Alonso describing the experience, “It’s a mirror, but empty,” allowing each individual viewer to fill in the empty spaces with their own thoughts and reflections, projecting their own idea of liberty.  While the woodcutter is nearly self-sufficient, deriving his income and basic needs from nature itself, his isolation, however, allows him to be economically exploited, so that the wood that he cut so carefully ends up being sold cheaply, where he’s at the mercy of market prices set by the lumberyard.  Who’s to say they don’t continually take advantage of him, as he’s a small time operator, where the sale may even be off the books, as Misael is part of a continuing journey from nature to the market and back again, somehow balancing work and nature.  The film never romanticizes the labor, but this is the lengthiest section of the film, shown with cinematic realism, where the slow pace of the film seems to extend our time with a man alone in the woods, literally expanding our boundaries, taking viewers on a journey at the margins of civilization.  But like Flaherty’s NANOOK OF THE NORTH (1922), this is a staged reality, a kind of fictionalized documentary, starting and ending in the same place, creating a mythical structure of a routine day in the life, as if every day is pretty much like this one.  Because of the relationship between Misael and his environment, there is a fine line between loneliness and freedom, where there may be days when he speaks to no one, but remains at a distance, preferring solitude to socialization, becoming a prisoner of uncertainty, subject to a different kind of inner life, something the camera never sees, that each viewer themselves must discover.  As an art film, outside the guidelines of commercialization, the director has already escaped the norms of traditional film language, driven by a desire to establish his own artistic freedom, refusing to follow the paths paved by others, using a radical stylization that is both provocative and informative, which may be uncomfortable to many, where each new generation will have to decide for themselves the worth of this kind of artistic approach, but as a first feature, it’s rare.
Posted by Robert Kennedy at 12:54 AM